Matthew Mitchell and Peter Boettke are academic economists at the Mercatus Center, a think tank associated with George Mason University. I like Mercatus and its work a lot, as it explicitly builds upon and follows the work of people like F.A. Hayek, Adam Smith, and James Buchanan. I don’t follow the academics too closely, but they often have some good insights, so I was looking forward to a book that might summarize some of those insights and let me know where to look for more detail.

The idea behind the book is to provide an accessible and easy-to-read means to grasp the basic conclusions of this branch of libertarian-inspired, Classically-flavored economics. You can get a free .pdf of the book here:

Here is what the book is about:

They begin with a puzzle that has vexed economists for more than 200 years: Why are some societies fabulously wealthy while others are miserably poor? They briefly survey the empirical tools that might answer this question and show that this puzzle cannot be understood without grounding the analysis in theory, suggesting that the first place to start is with mainline economic theory. Throughout the discussion, Mitchell and Boettke offer the reader examples of how these tools have helped researchers and policy analysts bridge the gap between ideas and real-world problems.

This, as the authors note, is the same question that inspired An Inquiry Into the Nature and Causes of the Wealth of Nations, by Adam Smith back in 1776. In that book, Smith said:

Little else is requisite to carry a state to the highest degree of opulence from the lowest barbarism, but peace, easy taxes, and a tolerable administration of justice; all the rest being brought about by the natural course of things. All governments which thwart this natural course, which force things into another channel, or which endeavour to arrest the progress of society at a particular point, are unnatural, and to support themselves are obliged to be oppressive and tyrannical.

Today, I’ve summarized this basic idea as the Magic Formula, adding Stable Money to Smith’s Low Taxes. I am sure Smith, always a hard money man, would have agreed; he just didn’t have to worry about it much, since the British pound by then had had an unchanging value for over 200 years (at least, officially, and in terms of silver).

The Mercatus folks are a little fuzzy on Stable Money, giving home to NGDP Targeting fans like Scott Sumner, who we looked at earlier. But, forty years after the Supply Side Revolution began to stir, and after decades of diligent work by organizations like Cato, Heritage and AEI in favor of low taxes, leading to the most recent GOP tax reform, you would think they would have some pretty keen insights on Low Taxes.

You would think that, but you would be disappointed. The book has nothing to say about either Low Taxes or Stable Money. Let’s take a look: 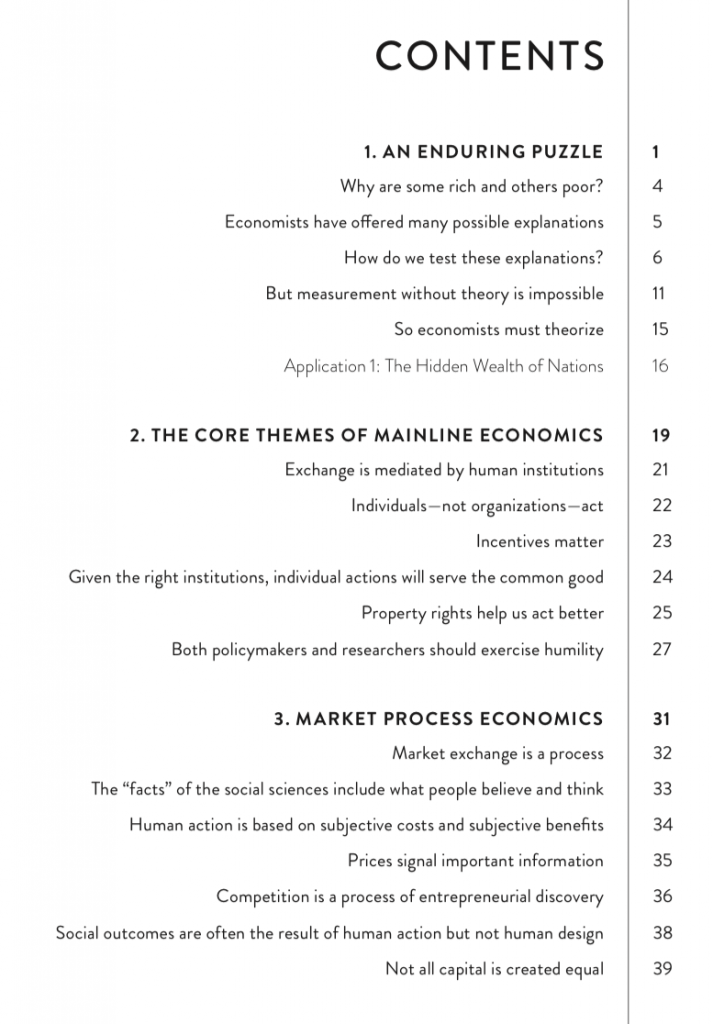 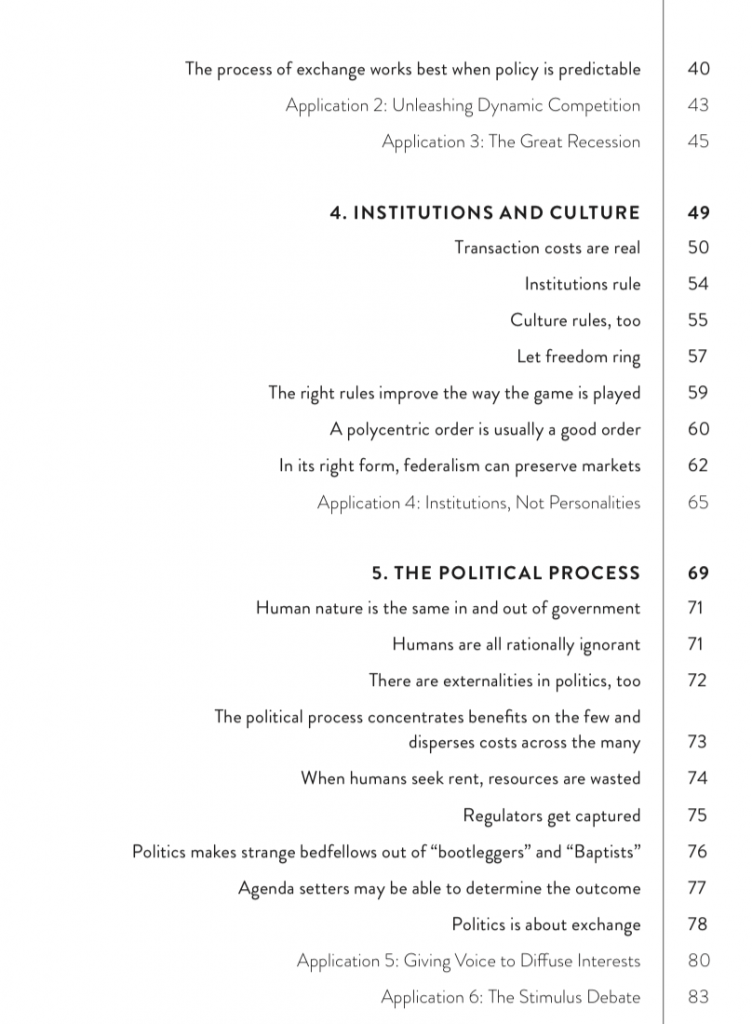 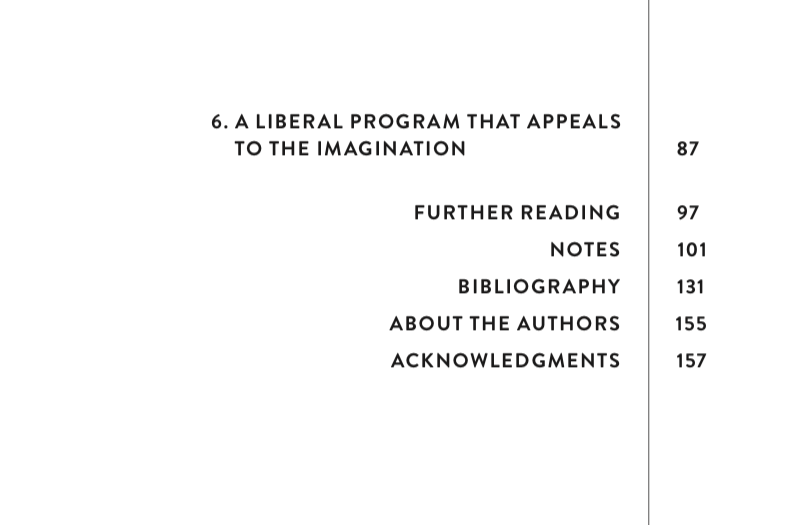 “Aha!” — you say — “certainly a discussion about taxes must be in the section on ‘incentives matter.'”

Good guess, but wrong. As shown in the table of contents, this section is only one page long. The entirety of that discussion consists of this:

Acting individuals respond to incentives. And while we can never presume to know how every person will react in every situation, there are some regular patterns that seem to characterize human action. In particular, humans typically seek pleasure and avoid pain. Moreover, they make trades, weighing opportunities against one another. And they make these trades “at the margin” in the sense that they compare additional bene ts of any activity with additional costs—including the additional opportunity cost of forgoing another activity.

These simple ideas about incentives and trade yield the basic supply and demand models of economics and go a long way toward explaining an extraordinarily wide range of human behaviors. They tell us that when the cost of reckless driving is decreased—say, by laws requiring everyone to wear seatbelts—people will tend to “demand” more speed. And they tell us that when ship captains who transport prisoners are paid for every live prisoner who disembarks rather than for every prisoner who boards—as happened aer the British Crown took the advice of economists in 1793 and changed the way it paid captains shipping prisoners to Australia—the “supply” of live prisoners will rise.

These ideas—that incentives matter, that demand curves slope downward, and that supply curves slope upward— should not be the final word in economic analysis. But they should almost certainly be at the beginning of any economic inquiry.

OK, maybe not. How about in “Transaction Costs are Real”? Certainly a tax, which generally applies to a transaction such as a purchase or payment of wages, is a sort of transaction cost, and one that would then affect behavior?

That is true, but there is no discussion of taxes there either.

I liked the book a lot, especially its discussion of Public Choice theory, Institutions and Culture, the Political Process and so forth. But, as for answering the question that they set forth at the beginning, I think they still have a ways to go before they catch up with Adam Smith.