How To Make a Pile of Dough with the Traditional City 8: Shared Parking
April 22, 2012

We have been looking at ways to use Traditional City design techniques to make fabulous Places for people — as fabulous as the great cities of Europe and Asia, which remain today treasures of civilization.

This is not too hard when you have a subway and train system which is sufficiently developed that a person can live comfortably without a car — when, in fact, a car becomes a burdensome luxury item. This is the normal state of affairs in most large cities in Europe and Asia, but in the United States, I would say only New York City fills the bill, and then only if you stay inside New York itself. The problem with New York is, of course, that you have to live in New York, which even New Yorkers will admit is pretty rough going for the average family. This is because New York is a 19th Century Hypertrophic City, not a Traditional City. But, you can still live there without a car. Just take the subway.

Ideally, you can have not only a nice train system within the city itself, but one that stretches all over the country, so you can travel anywhere without ever needing a car. This might seem utopian, but it is the normal state of affairs if you live in Paris or Osaka.

Alas, for us here in the U.S., we can’t just wait around until someone builds a nationwide train system. We have to accept that, for at least a while, personal automobiles will be the only means available for transportation, at least when traveling out of a localized area, which may be built in the Traditional City fashion and thus where a person can do their business by walking instead of driving. In other words, everyone will have to own a car, and have a place to park it. Our goal for now is to make that car something that is used only occasionally, and that you can do a lot more by walking around your neighborhood, to the school, bank, grocery store, post office and so forth. You can commute to work either on foot or perhaps a train if that is available. So, you are using your car a lot less, even though you still have one. And, maybe the family can avoid that second or third car.

We have already seen that we can create rather lovely Traditional City-type neighborhoods, and population densities on the order of 30,000 people per square mile (compared to about 8,000 people for the denser examples of Suburban Hell today), while maintaining the “single family detached residential” or SFDR format popular today. Indeed, this is quite common in Japan, which has a long history of SFDR housing dating back centuries. This high-density SFDR format can easily accomodate parking for one or two cars per household.

July 31, 2011: How To Make a Pile of Dough With the Traditional City 5: The New New Suburbanism 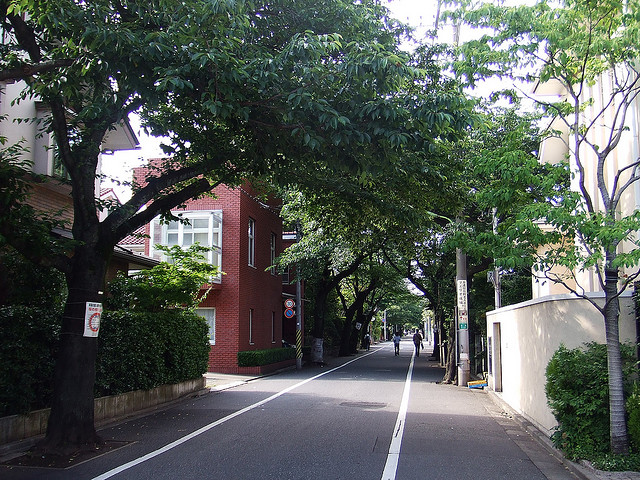 SFDR neighborhood in Seijo, western Tokyo. Note the people walking down the middle of the street.

However, we begin to run into troubles when we want to raise the density further, for example to a typical attached townhouse format. If you have a garage for every townhouse, and a plot width of perhaps 25 feet, pretty soon you run into the “wall of garage doors” effect: the entire first floor is dominated by automobile parking. This is unfortunate, because we want to make a place that is pleasant for people to walk, and the people are walking there at ground level. 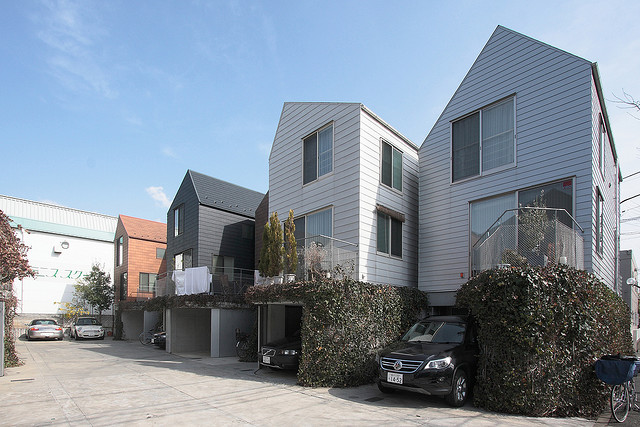 Townhouses in Tokyo, with parking at the first level. Still a pleasant environment, but parking dominates the street view.

In the case of the apartment building, and also the townhouse to large degree, I think the way forward lies with some form of decked shared parking. “Shared” means that there is one large parking garage, not a separate garage with a separate entrance for each resident. “Decked” means that the parking area has a concrete ceiling, and on top of the parking garage, you can have some sort of pleasant and useful space, perhaps a building, courtyard, garden, patio, or some other lovely element of the Traditional City.

On the street level, you would see just one entrance/exit, although there might be parking for hundreds of cars inside. This eliminates any need for a “wall of garage doors.” In terms of land use, we have no “Non-Place” because the parking areas are all decked, and above the parking, we have some sort of Traditional City Place.

We want the street level view to be some sort of Place. The street level is the ideal spot for some sort of retail establishment. You could also have some sort of inviting and attractive exterior of a house or office building. What we absolutely don’t want is a blank wall — that is no better than the wall of garage doors that we are trying to avoid.

Apparently, this sort of thing has already become common for townhouses in Canada, and for larger buildings in Texas (of all places). Here’s my drawing of how you could use this idea to create an apartment building which is very much like the courtyarded apartment buildings of central Paris, but which includes ample parking for all residents, and also retail at street level:

One side of the building can be adjacent to an “arterial street” which has a dedicated automobile roadway and sidewalks. The other three sides can be Really Narrow Streets, i.e. pedestrian streets of 15-25 feet wide. The height of the building is six stories, a common Traditional City height throughout Europe.

If you replace the six floors of apartments with three-story townhouses, then all the townhouses can have a nice backyard like Julianne Moore, and not have the front of the townhouse dominated by a two-car garage door.

In this way, we can accommodate quite a lot of parking, while keeping a form that is quite close to our Traditional City ideal, and also maintaining our goal of eliminating as much Non-Place as possible.

Also, we can not only provide parking for residents, we can provide parking for visitors and residents of other buildings. The buildings adjacent to arterial streets, with dedicated automobile roadways, can have lots of parking, while the buildings nearby might have no parking at all. Thus, we can create a neighborhood in the true Traditional City manner, with no parking whatsoever, a true pedestrian-centric Place, but still have ample parking within a brief walk. Indeed, no cars would want to go there, because there is no place to park! 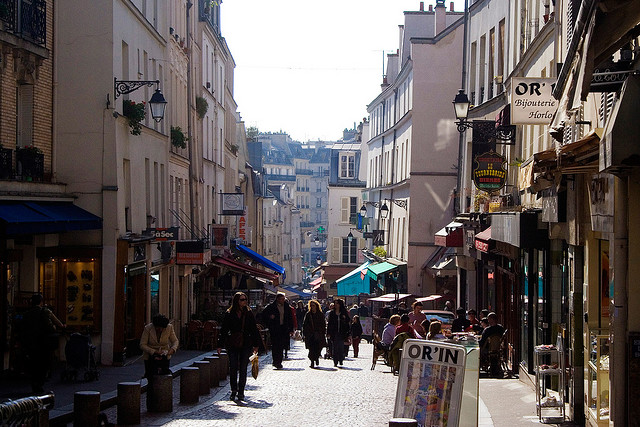 All the parking you want and … a neighborhood that looks like this!
Paris. 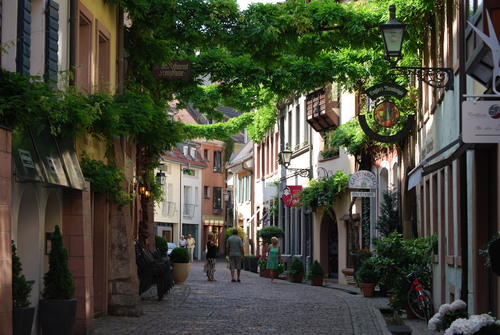 No autos here, but you can have a building nearby with shared decked parking.
Freiburg, Germany. 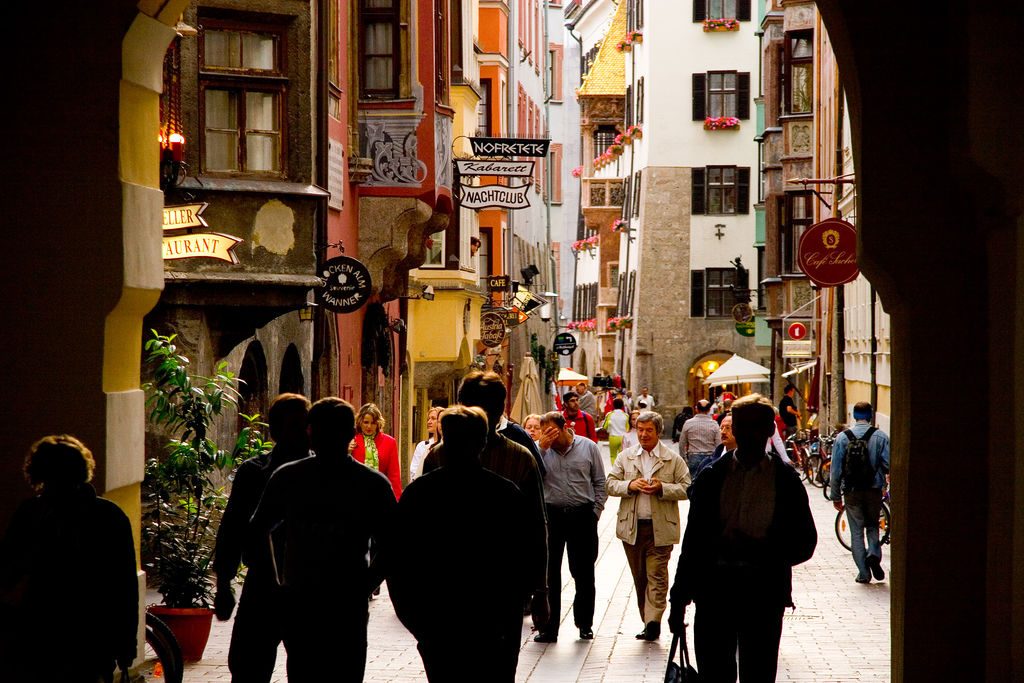 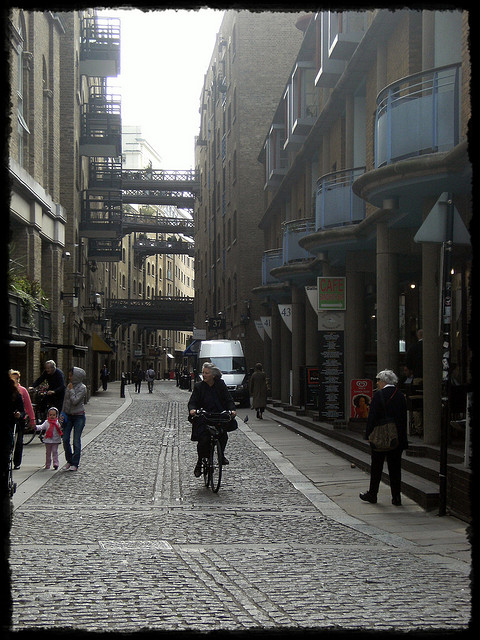 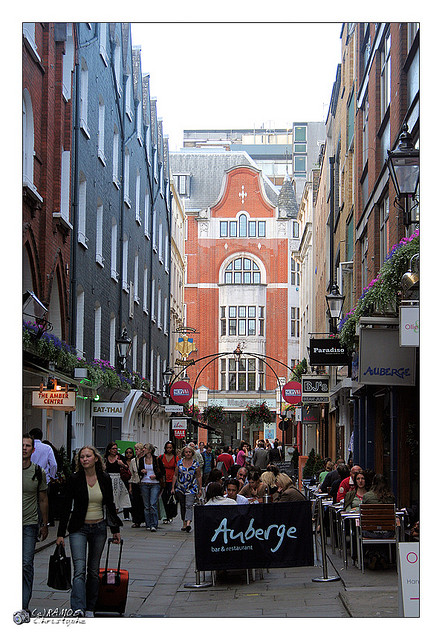