You can tell from the title of this book alone that I would be interested in it. There aren’t very many books out there on the Classical Gold Standard era of the latter Nineteenth Century. Indeed, I would say that Giulio Gallarotti’s book The Anatomy of an International Monetary Regime: the Classical Gold Standard, 1880-1914 (1995) is about the only one I could name, at least since 1960. There are other books, but they are collections of papers. I like Gallarotti’s book a lot — he demolishes all kinds of common misconceptions, with an impressive array of scholarship, and I agree with most of his conclusions — but it is really a specialist work. The fact that Gallarotti is not a professor of economics, but rather a professor of government, makes perfect sense to me. (I contacted Gallarotti at one point, and was pleased to discover that he had read Gold: the Once and Future Money. So, perhaps we are now a mutual admiration society.)

Steven Bryan, it turns out, is a practicing lawyer in Tokyo, with a PhD in History. To my surprise, however, only a rather small part of the book — 38 pages, actually — deals with the Classical Gold Standard on an international basis. Much of this consists of discussions surrounding bimetallism, and the abandonment of silver after 1870. This is reasonable, since it was the abandonment of silver that defined the “gold standard” of the time. Bryan, like most writers, makes too much of this, however. The U.S. bimetallic system had the dollar worth $20.67/oz. of gold since 1834. It was still $20.67/oz. in 1910, after the U.S. had officially adopted monometallism — the only difference is that silver had been dropped. There was, effectively, almost no change to the system. Silver coinage still circulated in the U.S. — more of it than ever, actually — but it was token coinage. The switch from bimetallism to monometallism was much the same in the Latin Monetary Union, Germany and elsewhere, which is to say, mostly a non-event.

The rest of the book consists of a rather more detailed history of the adoption of the gold standard in Argentina and Japan. Argentina had a lot of currency blowups (then as now), one of which set off the Barings Crisis of 1890 that was probably the biggest financial debacle of the time. Argentina returned to gold in 1903, and maintained the gold standard to 1914. Japan’s silver-centric system ran into troubles with the decline in silver vs gold after 1870; plus, the government was printing money to pay war expenses, leading to depreciation of paper banknotes even against the declining value of silver. Eventually, the Japanese government decided to clean all this up, adopting gold monometallism in 1897. I’m glad to have some good accounts for both Argentina and Japan, including some good exchange rate info for Argentina that I didn’t have earlier. 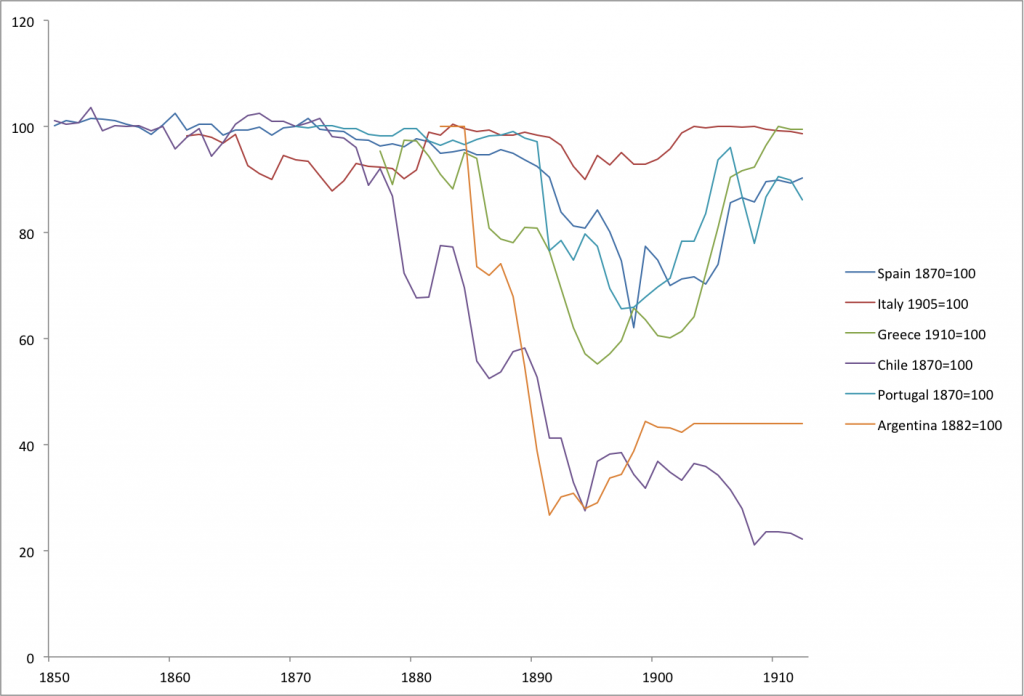 So, the book has some decent content, but still falls far short of a comprehensive and accurate account of the era.