We’ve been talking about The Midas Paradox (2015), by Scott Sumner.

Today, I promised that we would take a look at some of these “supply and demand for gold” factors that Sumner talks about. Supply is pretty stable during this time, either in terms of mining or aboveground gold, so it is really about demand.

I’ve talked about these sorts of “giant rise in the value of gold” theories before, but mostly in response to the Cassell/Johnson arguments, which are really more about long-term multi-year or even multi-decade trends of bullion accumulation among central banks.

We will be rehashing some of those arguments here, although more in terms of Sumner’s short-term demand “shocks” hypotheses. Nevertheless, read those items first, so I won’t have to repeat them in entirety. 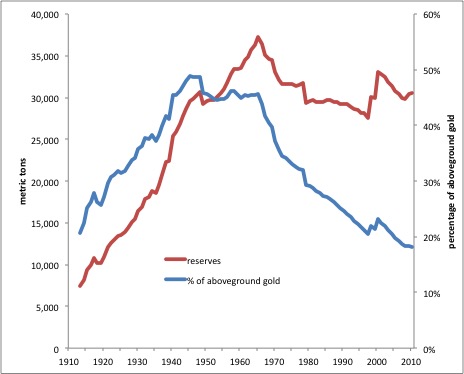 When central banks finally did start selling gold in size in the mid-1960’s — a far larger change in central bank behavior than anything that happened around 1929-1935 — this had no effect on commodity prices at all. 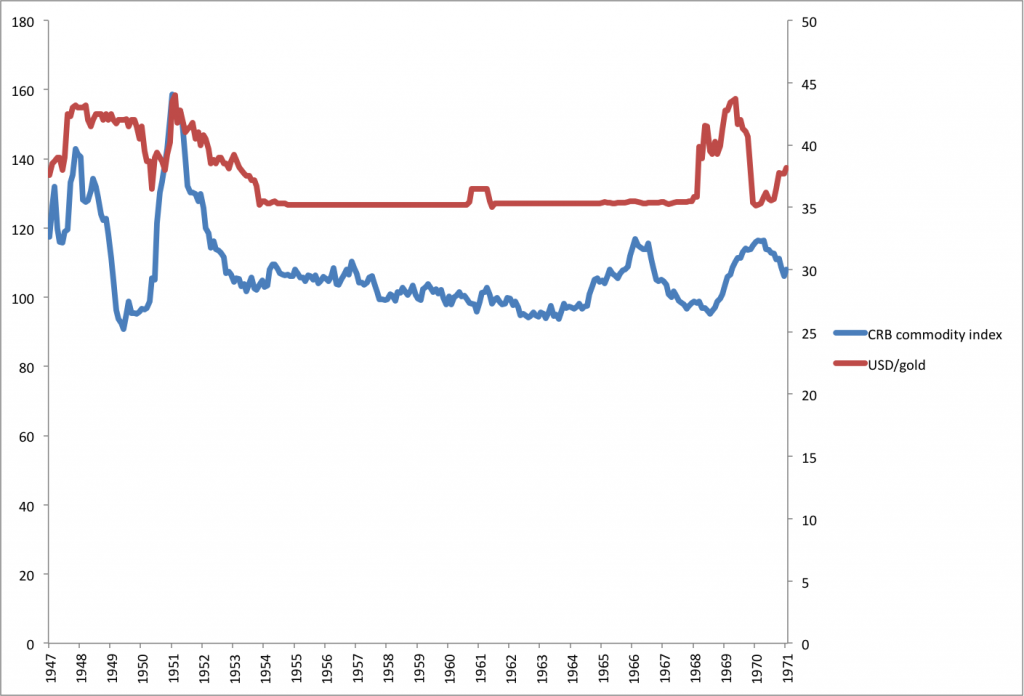 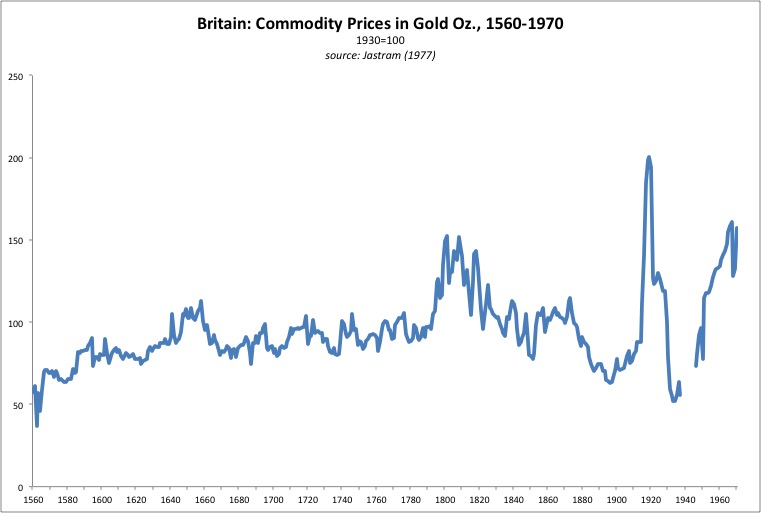 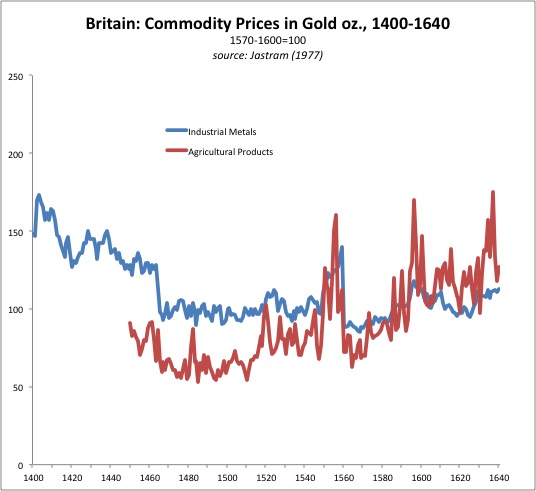 We have data on commodity prices vs. gold going back to 1400 in Britain. We can see that, in over 500 years of data,  there was never any dramatic drop, over a short period of time like three years, also associated with Depression, except during the 1930s. The only other decline of note was in the 1880-1895 period, which was a time of abundant economic growth, and probably reflected increased commodity supply over a much longer period of fifteen years or more, not a change in the value of gold. There are a few blips of note. One was around 1550-1560. I’m not sure what was going on during this time historically, but it was a time when the British silver penny was being aggressively debased. These prices in terms of gold represent nominal prices x the silver content of coinage x the silver/gold ratio. The silver content of coinage was undergoing all sorts of turmoil, so the ups and downs might be a statistical reflection of that rather than anything really having to do with commodities or gold. 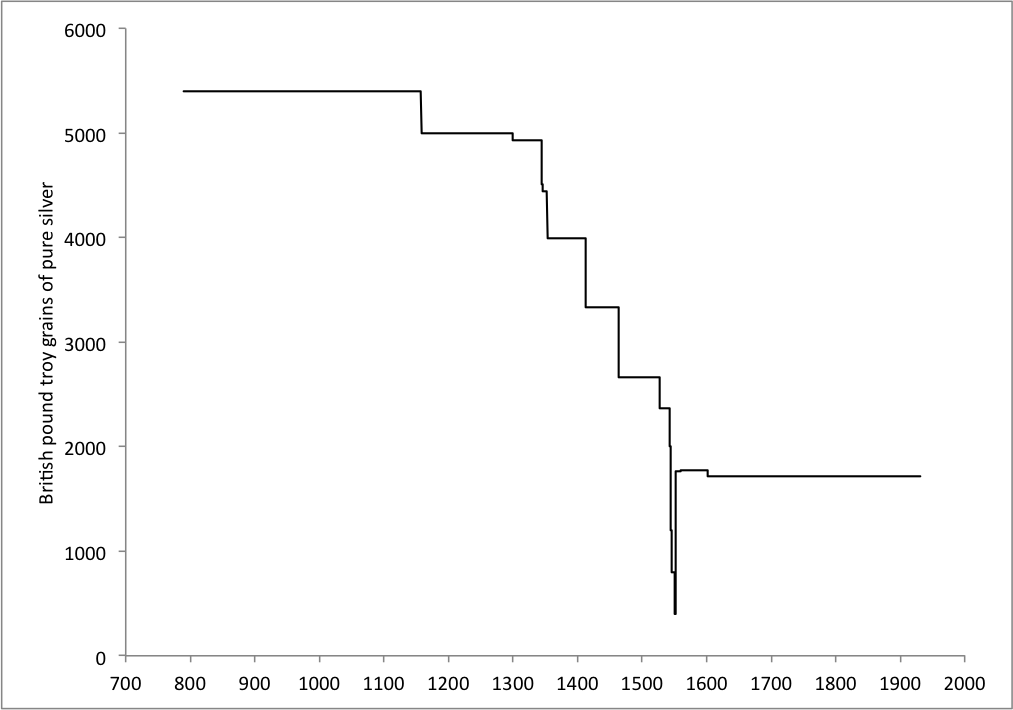 The other blips are the English Civil War in 1642-1651, and the Napoleonic Wars 1792-1815 — plus, of course, the rise during World War I. It’s no surprise that commodity prices rise during wartime, because of the increased demands for war materiel, plus the fact that commodity production is typically curtailed because the productive assets are destroyed or because of lack of labor as farmers become soldiers, because of the disruption of sea trade, or other such factors common during wartime. 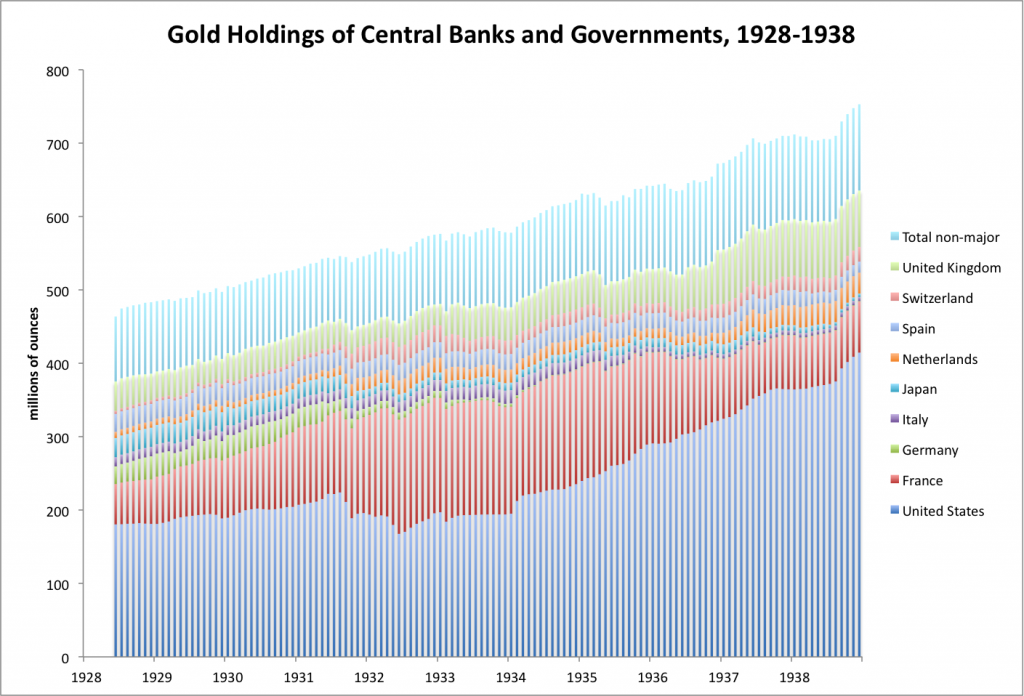 And there you go.

As we mentioned last year, this is about the smoothest series you could ever hope for in the real world. This is a surprising result. You would think that, given all the financial turmoil, all the bank failures, all the sovereign defaults, all the currency devaluations and introduction of floating fiat currencies, plus the increasing military activity toward the end of the 1930s, that this series would also show a lot of turmoil. But, it doesn’t. These eensy-beentsy little wiggles don’t mean anything, and certainly do not cause explosive rises and declines in the value of gold in a manner that was not seen in five centuries previous and caused a Great Depression.

The period 1928-1933 was particularly devoid of anything of interest. This is the time that Sumner focuses on for his “blame gold” notions, actually blaming other things (mandated wage increases) for some of the problems after 1933. The variation for central banks as a whole is less than for the United States alone. There is a bit of an increase here around 1936, and a bit of a flatlining around 1937, mostly due to activity in the U.S. Since commodity prices rose during 1936, and then fell in the 1937 recession, Sumner actually interprets this increase as “private market dishoarding,” by whom I don’t know, since by this time it had been illegal to own gold in the U.S. since 1933. The flatline in 1937 is related to the “gold sterilization of 1937,” which we looked at earlier.

Sumner does not give you a chart like this in The Midas Paradox, although he certainly had the data, and goes on and on about the importance of it for chapter after chapter. Why not? You know why not.

Sumner’s arguments about “private hoarding of gold” tend to be rather ad hoc and pop up conveniently wherever they fit nicely in the narrative. (The New York Times also tended to report gold market activity at the time as “hoarding.”) He doesn’t say much about it except as the inverse of central bank gold holdings. Nevertheless, the idea has some validity. In such an environment of turmoil, wouldn’t people hoard gold? And wouldn’t that potentially drive up the value of gold?

Let’s think about some of the implications of this idea. Yes, there might be some sort of effect like this. But is it large enough in magnitude to cause a rise in gold’s value that causes significant economic effects? Even so enormous as to be a major cause of the Great Depression?

This suggests a sort of spiral of disaster without any exogenous cause. There’s a little fuss, the stock market decline of 1929. Then people get panicky, and “hoard gold.” This causes more economic problems, so people hoard more, and this causes more economic problems, etc. in a sort of positive feedback loop. In other words, a relatively minor initial event caused an unprecedented global depression. If that’s so, then why didn’t it happen before? Certainly there were many minor events, throughout history. You would think it would happen all the time.

Also, there were some major events. What about the French Revolution and the Napoleonic Wars, which engulfed all of Europe? We see no rise in gold’s value. Commodity prices go up vs. gold. What about the Franco/Prussian War of 1870, which was brief, but a big deal while it was happening? What about World War I? World War II? We are supposed to believe that some minor jostle in 1929 or 1930 set off a self-feeding spiral of gold-hoarding disaster, but World War I did not? Nor World War II? When the German army stormed across Belgium and into France in May 1940 — an incentive for “gold hoarding” if there ever was one — commodity prices went up. They went up again after Pearl Harbor in December 1941. There might have been some sort of “hoarding,” but it didn’t have much apparent effect on gold’s value. That’s why people called gold “the Monetary Polaris.” These things don’t affect it.

Here’s a funny series from the NBER Macrohistory database. The original source is cited as the U.S. Treasury. It appears to show all gold (including bullion bars etc) in the U.S., outside of official entities:

I say “all gold” because the figures are very different from the data for gold coinage: 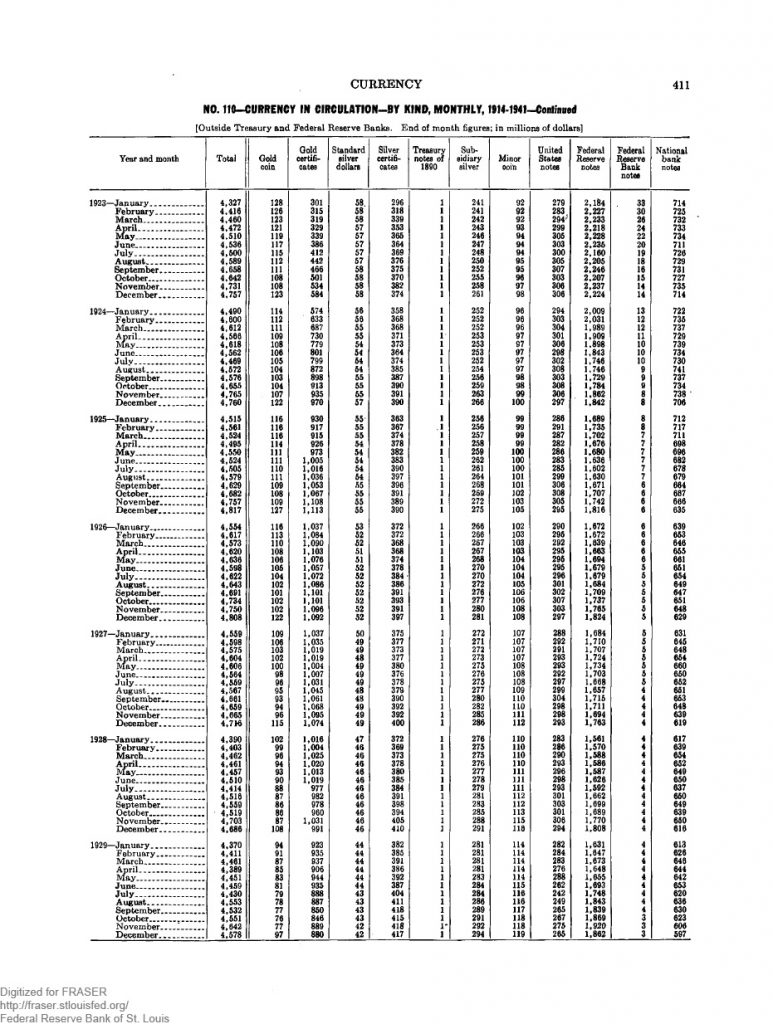 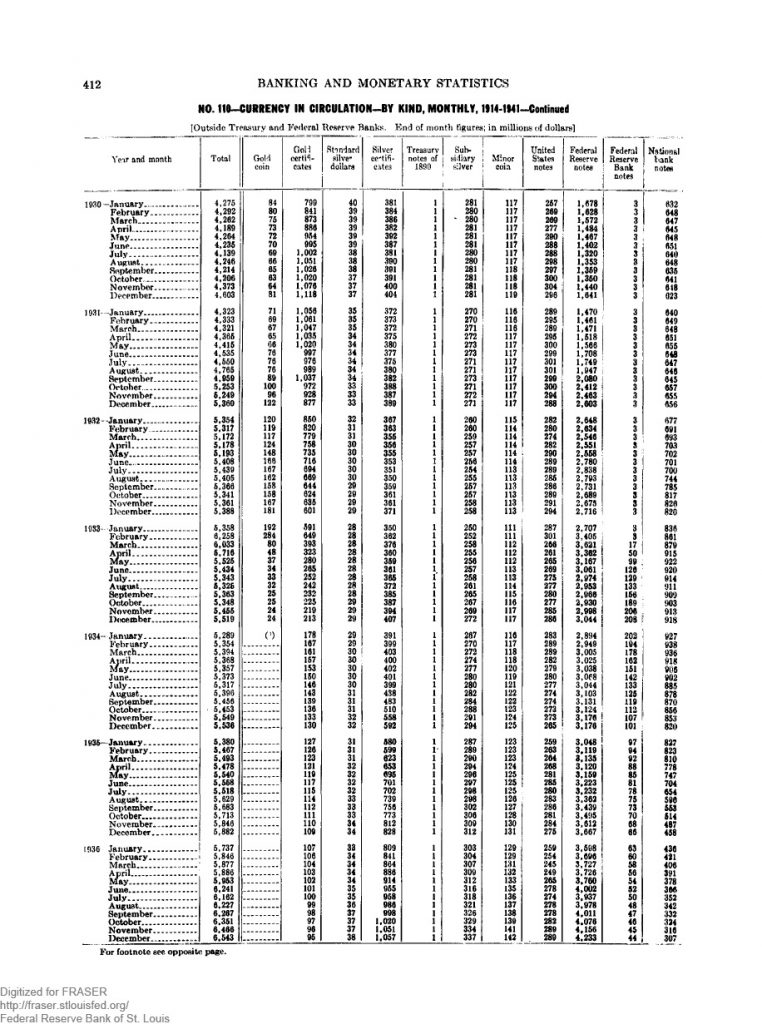 But, in any case, we can see that there does not seem to have been much rush to acquire gold coins in the U.S., until the end of 1931, with the devaluation of the British pound. Plus, the Federal Reserve was fooling around with its government-bond purchase program in 1932, which wasn’t exactly confidence-inspiring. Nevertheless, despite all this, gold coinage never reached more than about $167m in July 1932. This was a lot more than $76 million in July 1931, but it was only 3.1% of total currency in circulation of $5,459 million. During the same twelve-month time period, Federal Reserve Notes (banknotes) increased by $1,109 million. People were “hoarding” banknotes, not gold. There was real panic in December 1932-February 1933, with gold coinage rising quickly to $284 million, but this was very brief and the scale was still small. Nevertheless, it illustrates what could have happened earlier, but didn’t. 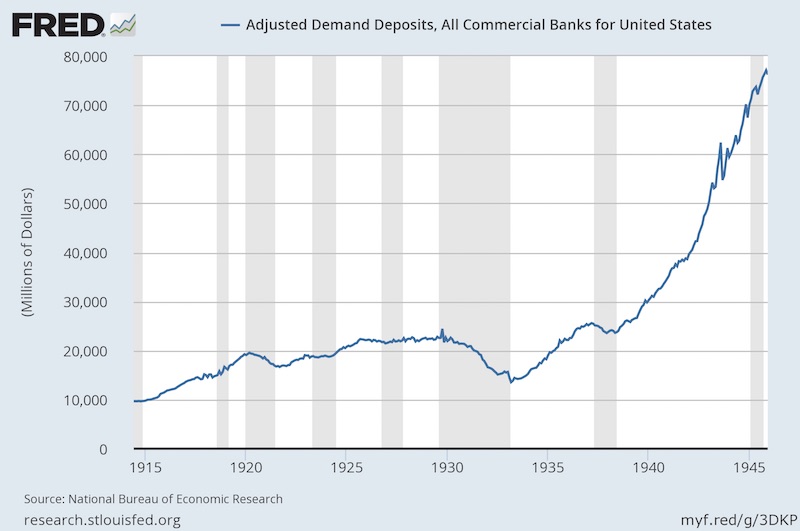 This compares to bank demand deposits of about $20,000 million.

So, let’s get this straight: people have demand deposits (plus time deposits, which we will leave aside for now), which they can redeem in Federal Reserve Notes at any time, on the order of $20,000 million. Also, there is currency in circulation of $5,400 million. That is about $25,400 million total. All of that could have been redeemed into gold coin at any time. Gold coins, such as the beautiful $20 Saint Gaudens, were a regular part of the currency system at the time. But, out of all that, gold coinage only increased by about $100 million in the worst of the 1931-1932 period — 1/254th of what could, with very little effort, have been potentially converted to gold coinage. This suggests to me that “demand” for gold coinage (and, by extension, other bullion products) was surprisingly subdued during this whole episode. Certainly I would be taking gold coins, rather than deposits of banks and paper banknotes, if I was living then. And, so did Bernard Baruch. But, this was rare. After 1933, it becomes illegal for U.S. citizens to own gold, which tends to put a lid on “private market demand” I would say. I would guess that the U.S. was not the only government to impose such restrictions, either. It would be nice to learn about what kind of restrictions on gold ownership Britain, France, Germany and so forth were imposing.

Here’s one last thing to look at. This is from the Jones-Obstfeld dataset at NBER.

“Hoarding” suggests imports of gold. There was a lot of wealth in the U.S., and you would think that it would be the people with the money that would be able to “hoard” gold in large quantity. But, we see that there wasn’t much importing (negative numbers) going on in 1929-1931, with actual gold exports in 1932 and 1933, which is exactly what the NBER data we looked at earlier said. The imports in 1929-1931 are almost entirely accounted for by increases in the monetary gold stock, which is basically the Federal Reserve. In 1930, for example, we see net imports of $280m, and an increase in monetary gold of $260m. 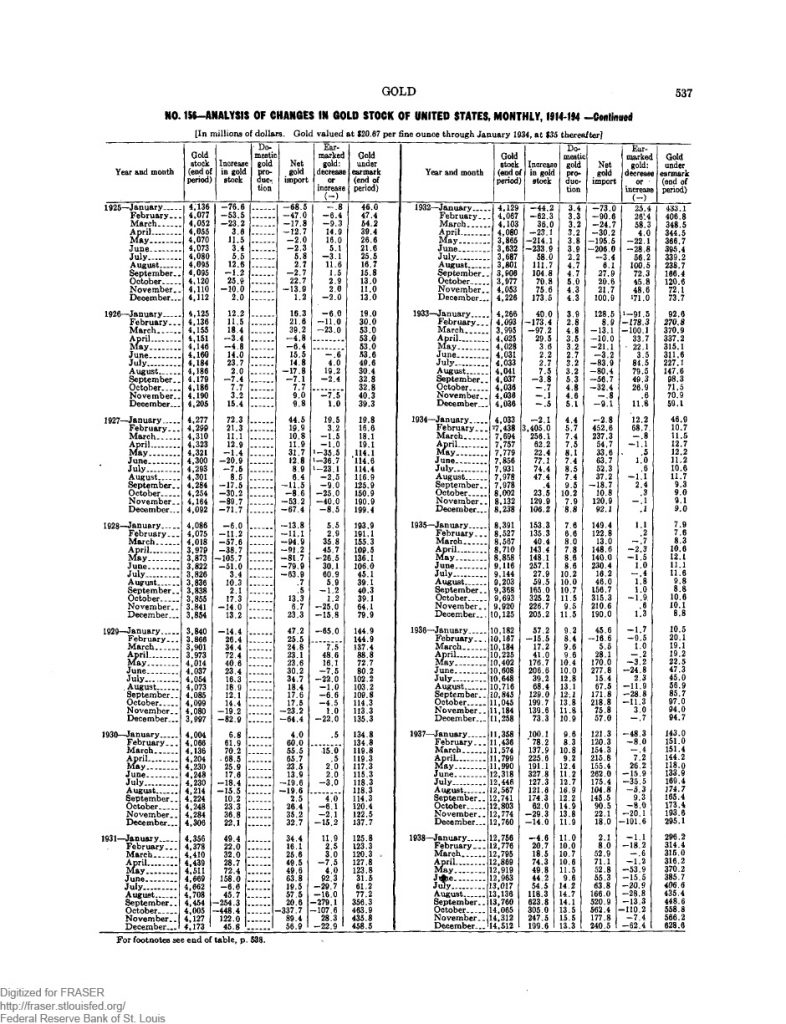 In Britain, which was the world’s financial capital at the time, there wasn’t much going on until 1933, which was probably related to the U.S. devaluation. Even in 1933, the increase is mostly due to the increase in the monetary gold stock, presumably the Bank of England, not the private sector. Wartime in 1939 brought big exports of bullion, obviously the opposite of “hoarding.”

France had big imports of gold, but this was almost entirely attributable to “monetary gold,” i.e., the Bank of France.

Germany’s gold flows also reflect “monetary gold” (central bank) actions, without much going on with the private market. Germany was a gold exporter in 1929-1934, and not much at all happened after 1934.

I would say that this data mirrors what we have seen in the U.S., which is that people didn’t seem to rush into gold, even when they should have.

We’ll talk more about The Midas Paradox next week.