(This item originally appeared in the Huffington Post on February 25, 2011.)

Despite what you might think, many conservatives and businesspeople support the original idea behind unions: that employees should enjoy some sort of basic middle-class lifestyle, commensurate with their contribution to the employer and society as a whole. Late 19th century “Dickensian” capitalism wasn’t really good for anybody, and its greatest critics typically came from the educated classes themselves. This was not so much different than 18th century France, in which the works of Rousseau or Voltaire, the inspiration for the French Revolution, were mostly read and appreciated by the aristocrats.

The problem is that unions today, particularly public unions, do not produce this result. The first potential problem is that, in many cases, unions require people to be paid who are not actually doing any work. This is simple extortion, and drives people nuts. I am happy to pay my auto mechanic his $80 an hour to fix my car, but I am not going to pay two mechanics to do the job of one.

The second problem is that many union members today — especially government employees — are grossly overpaid. In 2008, the average New York firefighter cost the city $186,464 per year. This was not the one single highest-paid guy, with full seniority who figured out how to game the system to the max. This was the average, which means that a good portion of New York’s 11,585 firefighters actually received more than that.

Is this compensation commensurate with their contribution to their employer and society as a whole? Plainly not. The average police officer cost $164,045. This is just extortion.

Much of this bloated cost is due to benefits, particularly pension contributions. Health insurance accounted for $8,735 of the total. Other fringe benefits cost $11,671. Pension benefits cost $69,884. Per year. Per firefighter.

Anybody want to stand up and try to justify this? You can’t. It’s absurd. It’s doubly absurd when you consider that this cost is supposed to be paid by taxpayers in the private sector, the great majority of which are not nearly so well off and many of whom are struggling today.

Add to this the fact, inevitable in these decrepit government bureaucracies, that many employees are not actually necessary.

This chart, courtesy of Charles Hugh Smith, shows what has happened to the University of California’s headcount over the past fifteen years. The number of faculty — the people actually doing the work of instruction — has risen by about 20%, but the number of administrators has more than doubled. The administrative headcount needs to be chainsawed. Are all those useless administrators “for the children”? Please. 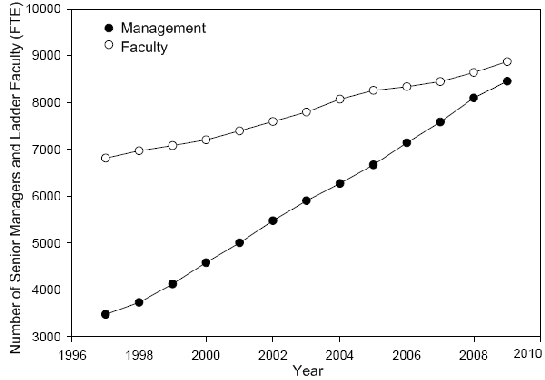 How is this supposed to work? Public employees typically had a salary somewhat lower, perhaps 20% lower, than they might receive from a private employer. This was offset by high job security and a few perks and benefits. Pensions should start at age 65, not a day earlier, at 70% of salary. (You can retire earlier if you want, but you have to fund it yourself.) All together, the total cost of non-wage compensation should be less than 30% of wages. The average New York firefighter should probably be making about $40,000 a year, with benefits of about $12,000. This is an average. The new guy might make $30,000, and the senior guy might make $55,000.

The ideal eventual outcome is that public union compensation ends up around this level, and that there is no excess headcount. Public employees can be happy with that. Taxpayers can be happy with that. The best way toward this ideal outcome is for unions, and their political supporters, to make a few concessions. In other words, the process is best driven by the Democrats, not the Republicans.

The worst thing is if union supporters continue to try to justify the unjustifiable. This is not going to work in the long term. You are going to lose. The process of you losing will be messy with many unpleasant consequences. Look at Providence, Rhode Island, which is preparing to fire all of its 1,926 teachers. This is not a solution, but it might be a way toward a solution. The hard way.

If unions and employees want more public support, they have to offer an outcome that benefits society as a whole. Continued taxpayer extortion is not that solution.