I calculated the total return this way:

This is not a very good way of calculating a bond index. There is no provision for the market price of bonds, among other issues. But, it should be good enough for a rough look.

First, let’s just look at the S&P500 index vs. gold, without dividends: 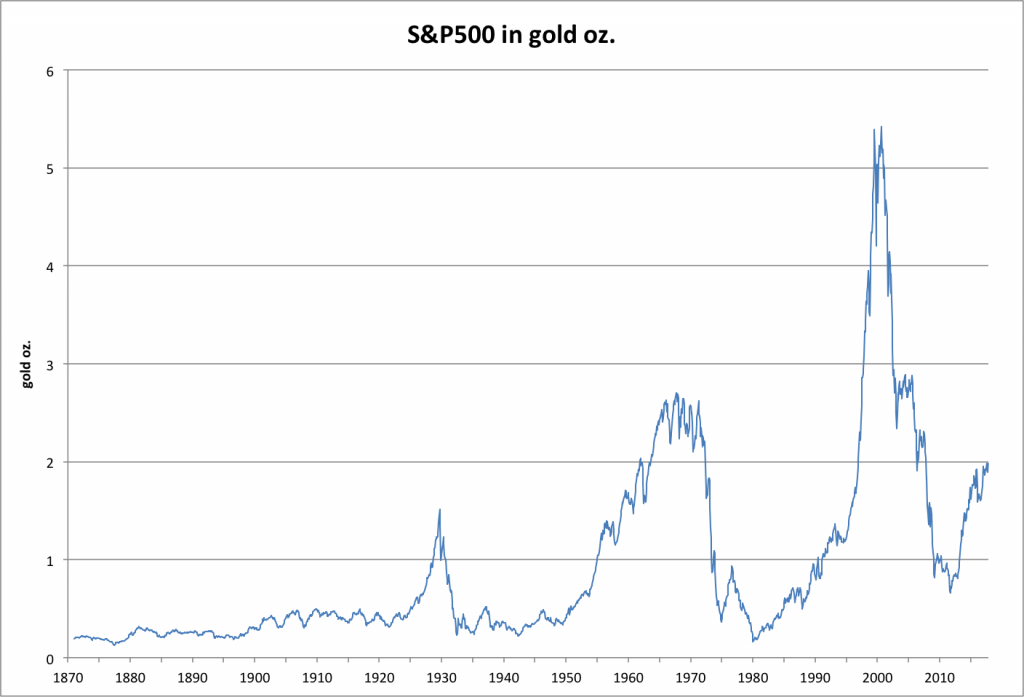 Not real impressive. By this measure, we are still below the levels of the 1960s, even with historically high valuations.

Here’s a similar chart, for houses, also from data from Schiller: 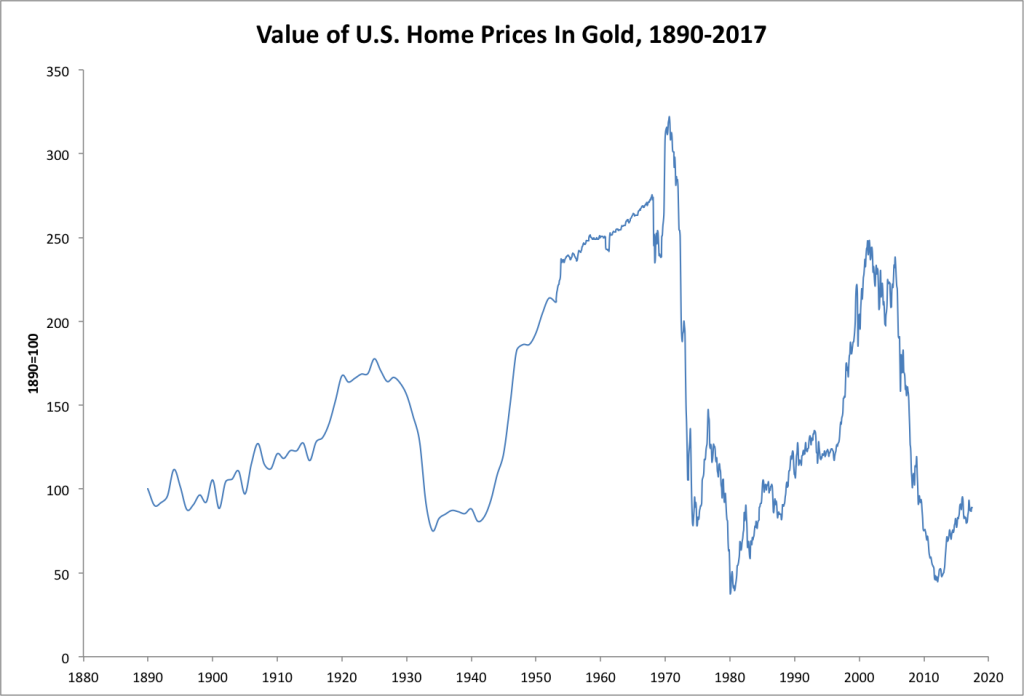 An intriguing chart, showing that houses really were cheap vs. gold around 2010, especially given low mortgage rates. 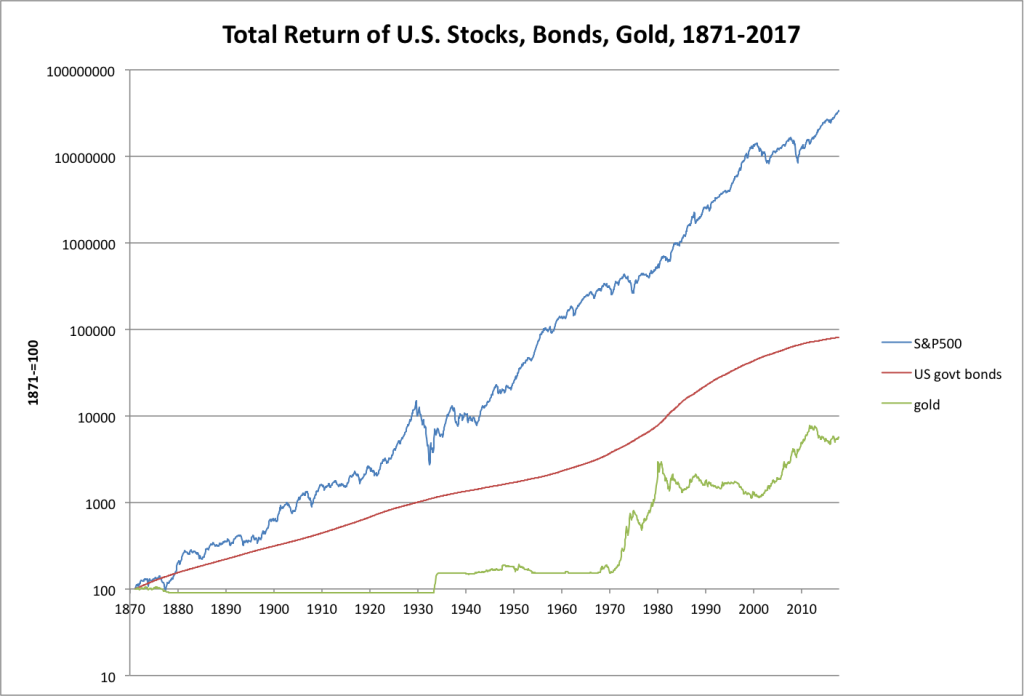 Here we see that stocks have been the big winner since 1871 (=100). This is not surprising, since gold went from 1871 to 1971 at a price of $23/oz. to $35/oz. There is considerable survivor bias here: we don’t show the record of all the promising stock markets/countries in 1870 where things didn’t go so well, including:

There’s an Ibbotsen study that estimates the return on equities/businesses worldwide during the 20th century, and the results are a lot less impressive than the U.S. results. 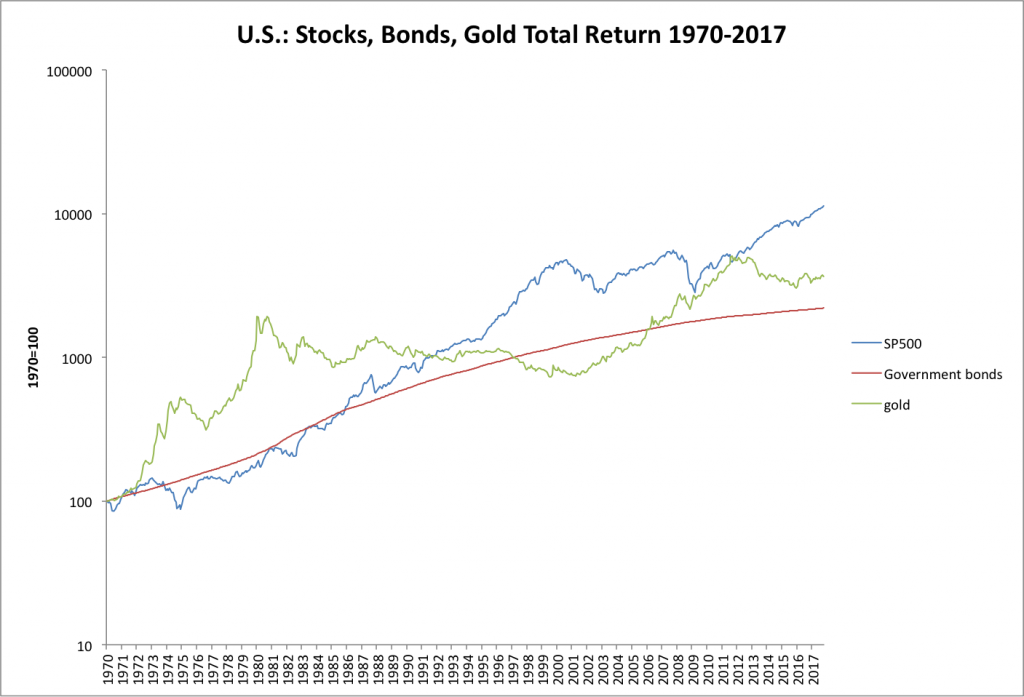 As we can see, the advantage of stocks is not so obvious, in the floating fiat environment since 1970. The bond index is probably somewhat understated here, since I think bonds were about even with stocks a few years back. Anyway, we see that gold and stocks were about even in 2009-2011. Stocks have a bit of an advantage now, but I still think that gold will prove superior before too long.

So, there you go. If anyone disparages the long-term merits of gold vs. stocks, you can point out that they have had comparable results since 1970, with periods where gold radically outperformed stocks, and also periods where stocks radically outperformed gold. Since gold is just a lump of metal, a “pet rock” as some like to say, whose primary characteristic is that its value doesn’t change much, we can see that this is mostly a testament to the poor economic performance of the U.S. economy since 1970, compared to what was the norm before 1970.