It doesn’t look to me like much of anything unusual is going on. This is just business as usual in Argentina. It is as Argentine as steak for dinner. It has been going on like this for a long, long time. We might wonder–why? Probably, it is a dynamic common in Latin America: periodic currency collapse helps keep the poor under the thumb of the wealthy elite, who keep their money safe overseas. They find a natural ally in the IMF, which shares a similar apparent goal of keeping countries in a continual state of debt servitude. Everyone is fat and happy – everyone in the top 0.1%, that is. 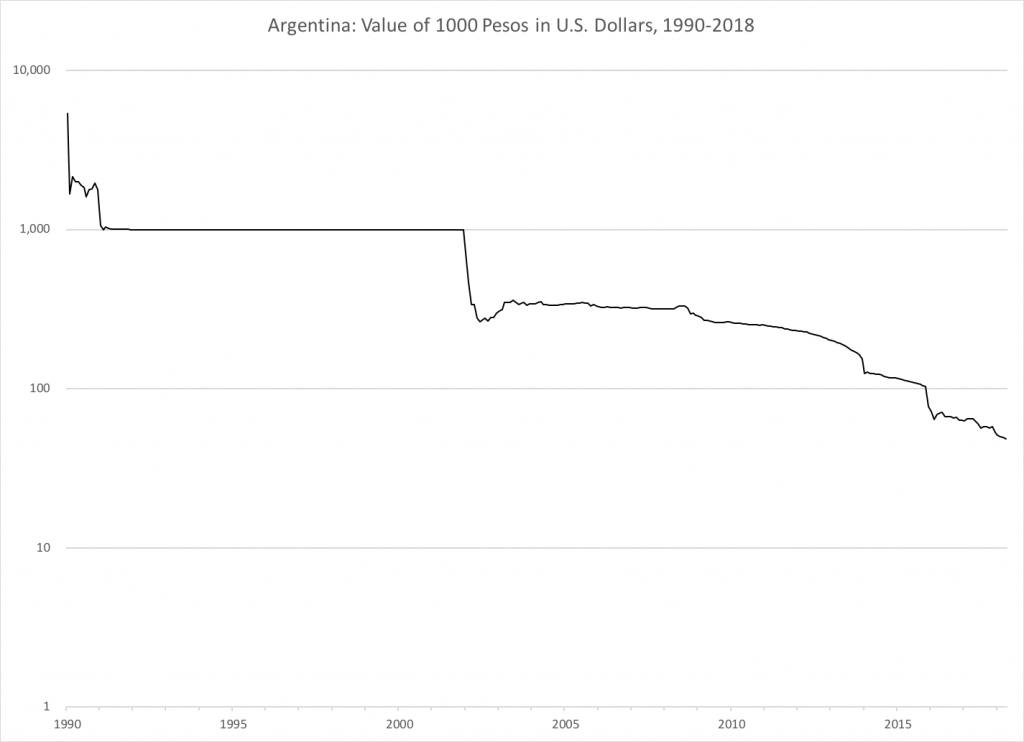 The Argentine peso today is worth about one forty-seven-trillionth of what it was worth in 1940, compared to the U.S. dollar. Hyperinflation is a sad fact of life there. At times, the currency has enjoyed a brief bit of stability against the U.S. dollar, its main foreign currency benchmark. But, this has rarely lasted for long. The most successful stretch was the period of the Argentine currency board, 1990-2001. In the midst of a crisis in 2001, in which it was feared that the currency board would be abandoned and the Argentine peso devalued, a team of economists from the U.S. went to Buenos Aires to promote dollarization. The peso would simply disappear, and be replaced with U.S. dollars, on a 1:1 basis. This would be a very easy thing to do, since the currency board already held dollar foreign reserves equivalent to all the pesos in existence. Pesos were like a “claim check” on dollars held in reserve. They could just ask for their coats back. Since there would be no more peso, there could be no more fears of peso devaluation. El Salvador chose this option, also in 2001, and it has worked well. But, the Argentine government refused this option, and instead chose to abandon the currency board and devalue the currency. It was a clear expression of what their priorities were. They like to play games. 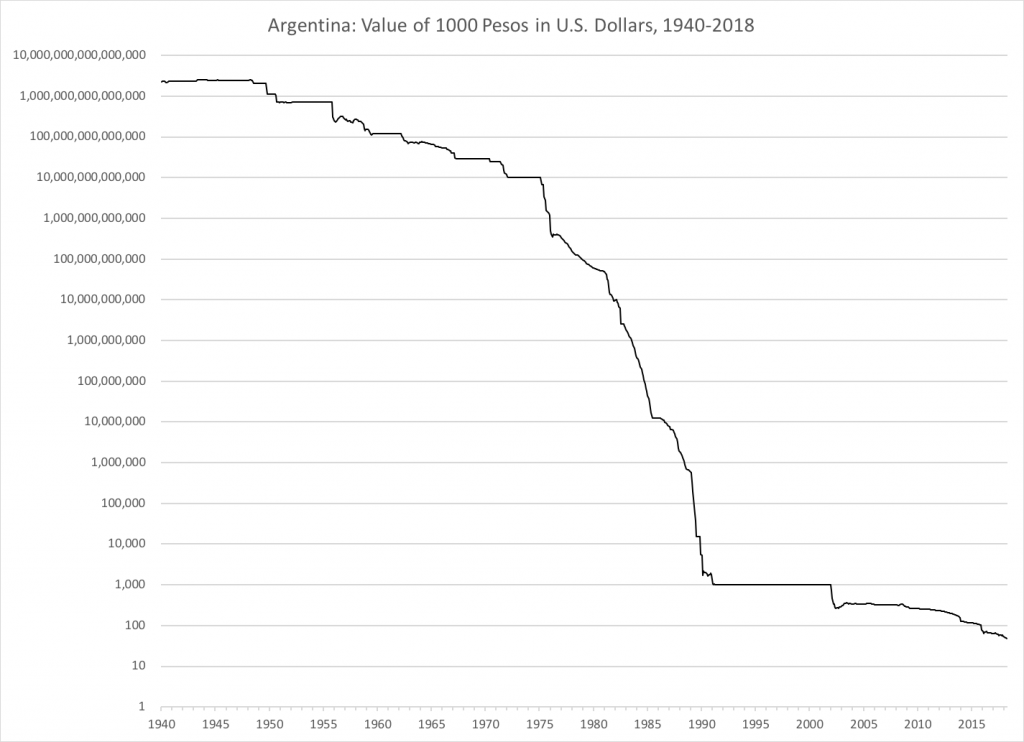 If we look at the central bank’s balance sheet, we find that base money – the number of Argentine pesos in existence – is about 30% higher than it was a year ago. This has been a typical rate of base money growth (“money printing”) over the last several years. The declining value of the peso indicates that this has been too much – the supply of pesos is consistently in excess of demand, and the value falls. I am sure that a country and central bank with Argentina’s history of both hyperinflation and currency boards are well aware of this. The only explanation left is that it is, more or less, on purpose. All the public babble about foreign exchange intervention and so forth is just tomfoolery. If they were in the slightest bit serious, there would be at the very least a reduction in the pace of money-printing. 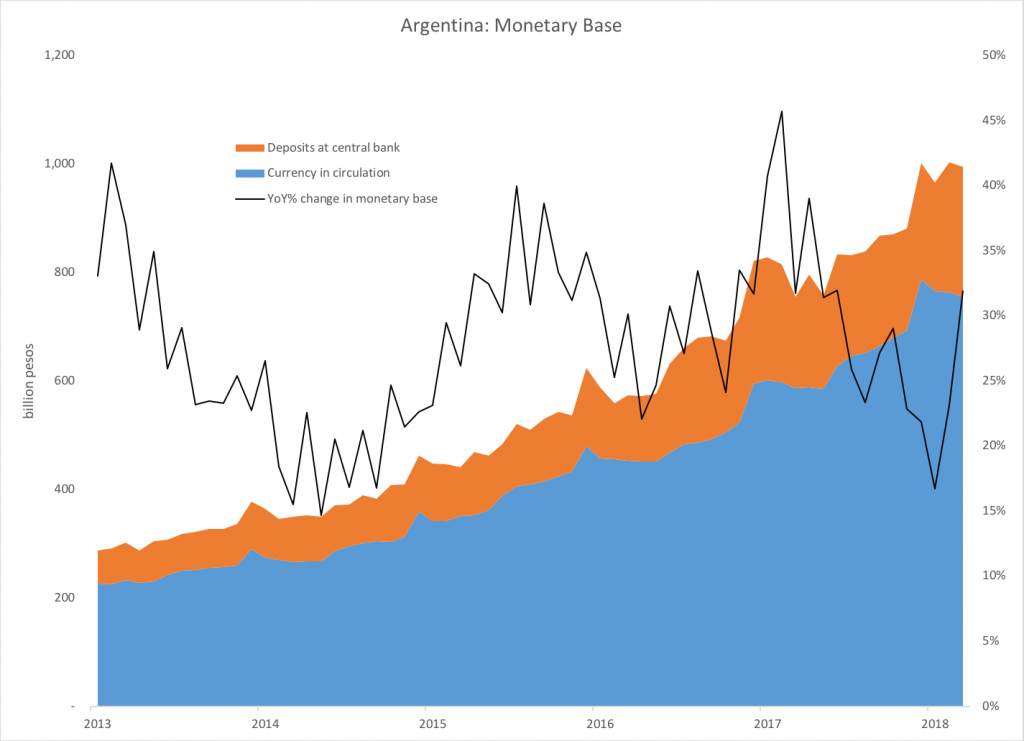 This is the basic principle of all properly-operating “fixed value” systems – a system in which the domestic currency’s value is held steady with some external benchmark, most commonly an international currency like the dollar or euro, possibly a currency basket, or gold. Most countries in the world today have a fixed-value policy. Argentina could fix its problems overnight, simply by implementing this process. With $60.7 billion in dollar foreign reserves, and a recent exchange rate of 20 pesos/dollar, they could buy back up to 1,214 billion in pesos – more than the 995 billion pesos in existence. We know it works, because they did so in 1990, after a decade of scorching hyperinflation.

Argentina’s problems, today just as in the past, are entirely self-inflicted.