First of all, what are bank reserves? Bank reserves are cash — literally dollar bills — held in vaults or held as a deposit with the Fed, as an electronic register. Before the Fed’s automated system, all bank reserves were cash, as in literal paper banknotes. Before 1940 or so, banks commonly used very large denomination bills as bank reserves.

What did banks do with these huge banknotes? Obviously, they weren’t for buying coffee and a doughnut. They were used to pay other banks.

What happens when you pay for something with a check or credit card? What happens is that your bank actually pays the bill, with real money, i.e. base money. This is done on a net basis. For example, let’s say that at the end of the day, 56,674 customers of Bank A want to pay a total of $67,334,392 to customers of Bank B, using checks, credit cards, debit cards, wire transfers and the like. However, at the same time, 32,336 customers of Bank B want to pay $53,223,956 to customers of Bank A. The two banks come together at the end of the day and say: “I owe you $67,334,392 and you owe me $53,223,956. Let’s net it out, so that I pay you $14,110,436.” This is what actually happens, every day. And how did Bank A pay this money to Bank B? With those $100,000 bills you see above. Yes, real money crossing the counter. Today, this is done electronically, using the Fed’s bank reserve system. Bank A’s reserves are reduced and Bank B’s reserves are increased. However, if a bank wanted to convert its Fed-registered bank reserves to paper money at any time, it could do so. The Fed can do this without borrowing the money from somewhere else, because it can print the money. So, the electronic bank reserves are effectively another “denomination” of banknote, convertible just as you can convert $10 bills and $20 bills with the Fed.

Another potential use for bank reserves is if the bank’s lenders want to be repaid. A bank will typically borrow lots of money at short maturity. These are demand deposits, of course, but also lending of all sorts including CDs, straight bonds, overnight interbank lending, etc.

Before the Federal Reserve was introduced, banks typically held a rather large portion of their assets in the form of bank reserves, i.e. base money, i.e. “cash.” This ratio was often around 10%, although it varied depending on individual banks’ management decisions. 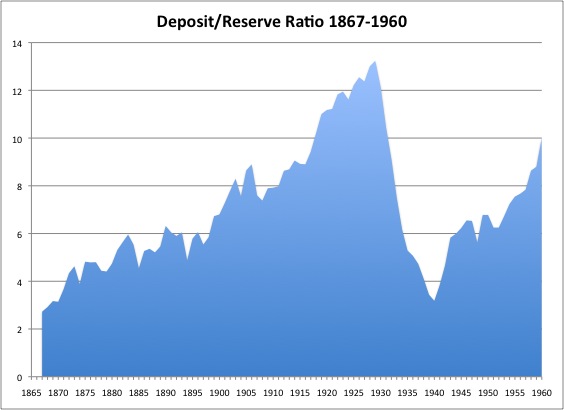 Here’s a chart of the deposit/reserve ratio of U.S. banks from 1867 to 1960. The data is from Milton Friedman. This is a bit of an odd representation. We could just as well show a ratio of reserves as a percentage of deposits. I think this makes a little more sense. 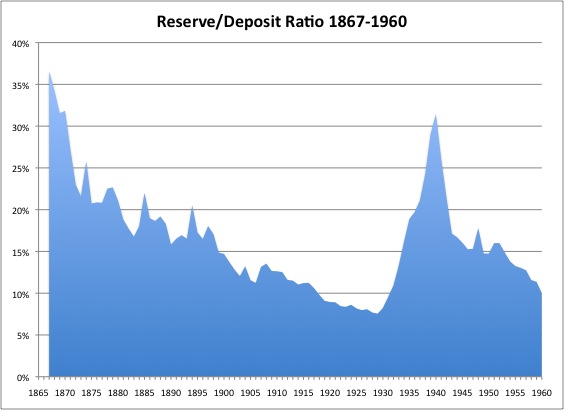 Anyway, the point of this is that banks sometimes hold huge reserves (think of a big stack of $20 bills), and sometimes they don’t. Bank reserves don’t pay interest, so there is a natural incentive to minimize reserve holdings. On the other hand, going bankrupt is sort of a bummer too, so banks don’t want to be caught with too few reserves.

We start this series in 1867, with immense reserves. Banks aren’t making a lot of loans, they are just sitting on cash. Why? Well, this is the aftermath of the Civil War so maybe banks are a little gun-shy. However, as the good times roll, banks hold fewer reserves. The reserve ratio is still pretty high though, around 10%-15%.

During the 1930s, there is another big burst in reserve holdings. Once again, banks are holding lots of cash, and maybe not making so many loans. There are a few reasons why banks do this. One: during times of financial stress, banks may not be able to borrow money. So they have to keep more cash around. Just like you: if you don’t have a credit card, you have to carry more money in your wallet. Second, sometimes it is quite difficult to find a borrower who can be expected to pay the money back with interest. The risk-adjusted rate of interest (i.e. net of default risk) is near-zero. So what’s the point? Banks just hold cash instead. Also, they are probably paying nothing or nearly-nothing on their deposits, so there is not so much of a problem with a negative spread.

I think that is enough for today. We will continue our discussion of bank reserve holdings later.