(This item originally appeared at Strongtowns.org on September 26, 2016.)

I have been spending some time in San Francisco, and of course everyone complains about the housing prices. This is causing real problems — even high-paying employers like Apple or Google find that their employees have nowhere to live, and often face both punishing commutes and extreme rents and mortgages. And if you are not in the Top 5% … sorry. Maybe you should sell your company to Oracle?

So, I am presenting a different vision: the possibility of a (very small) studio apartment, in one of the better locations of San Francisco (actually SF Metro, i.e., “Bay Area”), that you can purchase for $50,000, or perhaps rent for $400-$500 a month. This is a full market rate. No subsidy, no rent control, no “affordable housing” regulation, no land giveaways. Plus, we want the developers to make a return on capital that is not only adequate, but exceeds most other opportunities in their industry.

For detached housing, the cheapest, and worst, is the lower grade of “manufactured housing,” which can run as cheap as $50/sf. So, for $30,000, you could get about 500-600sf. But this is really dismal and crapulous, so let’s forget about it.

For a nice wood-framed cottage, you might be able to do $150/sf, which means about 200 square feet with a budget of $30,000. Since this is quite small, it could actually be done with manufactured housing; or perhaps on-site building too. What might this look like?

This manufactured home is of a better sort of construction quality that might serve our needs well: 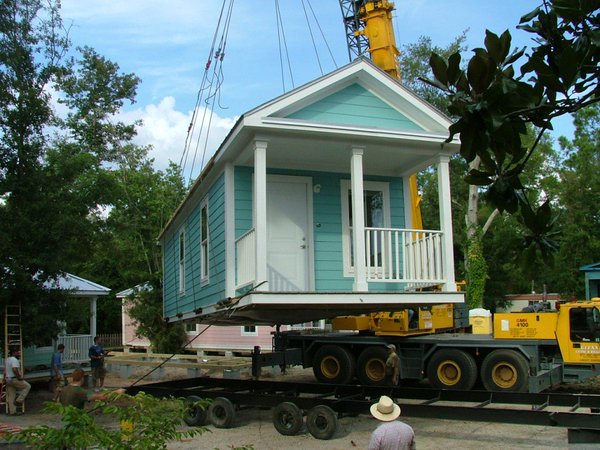 Here’s another neighborhood of cottages, in Martha’s Vineyard, MA: 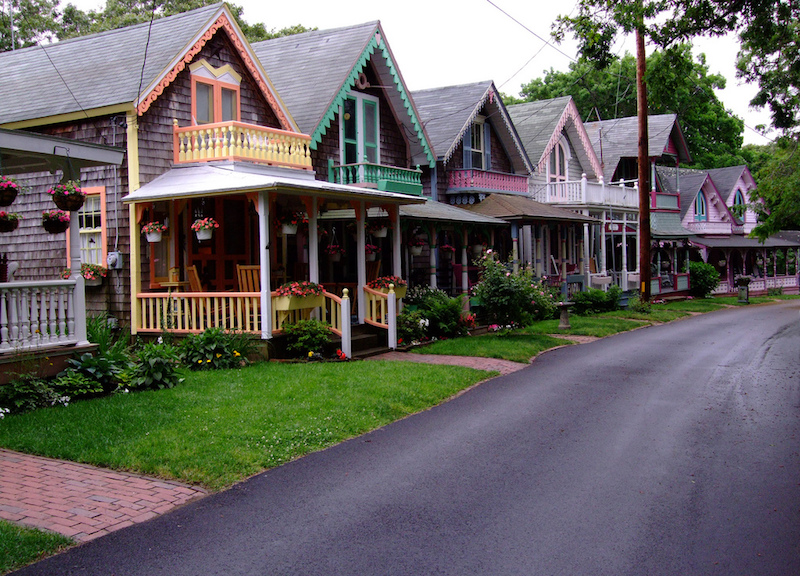 Dense spacing here, on plots that could be 1000sf. Martha’s Vineyard, MA. We are using our Traditional City design principles, of course with Narrow Streets for People of about 15 feet wide.

With a 200sf footprint, it would be possible to use plots of 500sf, with some room left for a little backyard. One advantage of the detached cottage approach is that it is a format that conceivably could be built by the owner. This would eliminate the need for a profit margin, and also eliminate labor costs. The result would be a cost of perhaps $30,000; or, a nicer and larger cottage, within our $50,000 budget.

FastCoexist did a story on these houses which cost $20,000 (in materials) to build.

Thrillist did a story on houses that can be built for less than $25,000.

A French architectural firm released this home design that can be built in four days, with nothing but an electric screwdriver. Using superinsulated Passivhaus design, it costs less than $41,000 to build. 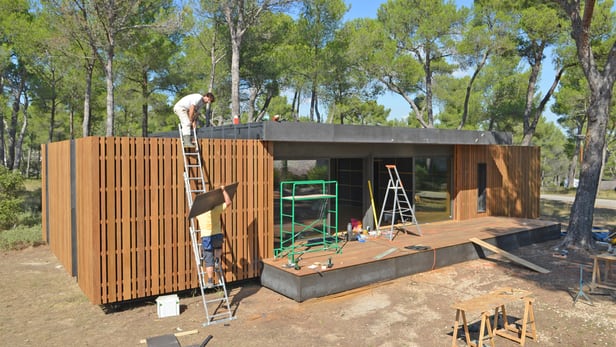 Moving up the scale a little bit, we come to a three-story woodframe walkup apartment building. We get some efficiencies of scale here, and our construction costs drop to $100/sf. This allows us 300sf/unit, but since some of that is used for hallways and other shared space, our apartment becomes 250sf. (In 2011, the National Association of Homebuilders released a construction cost breakdown showing that the average suburban house built that year had construction costs of $79.67 per square foot. With all incidental costs including financing, overhead and general expenses, marketing, and a sales commission, it was $96.02 per square foot.) 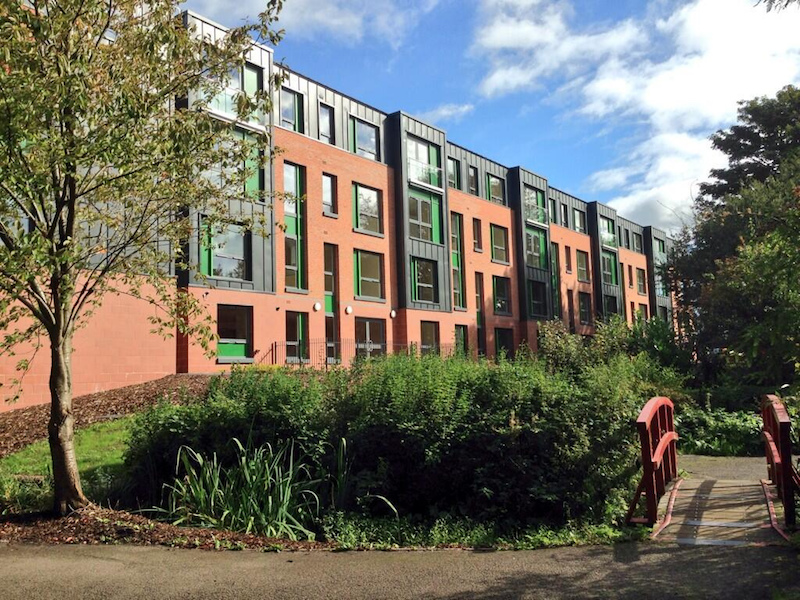 A somewhat more ambitious version of this basic format is here: 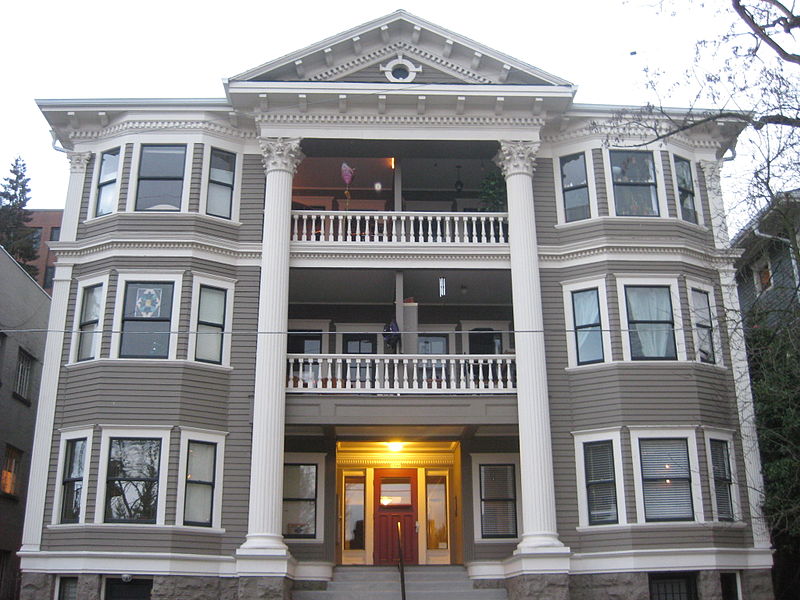 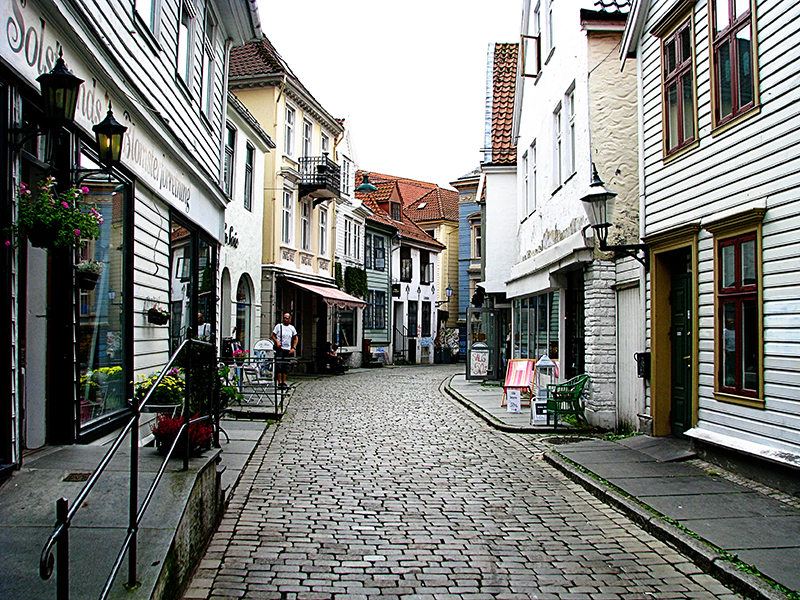 This street in Bergen, Norway illustrates what you can do with two-to-four-story wood construction. The overall effect is very nice, but the buildings themselves are pretty simple.

Next, we have a six-story structure, which is about the upper end of the Traditional City or “lowrise” format. We will step up here to a better standard of construction, such as brick or steelframe, with a cost of $200/sf. (The average U.S. construction costs for 4-7 story apartment buildings in 2012 was a little under $200.) This reduces our unit size to a really quite tiny 120 square feet, plus some common areas. Our footprint is still 6000sf, but since the unit size is smaller, we can get forty units per floor, or 240 units for a six-story building. At $10,000/unit for land, that gives us a budget of $2.4 million for land. We will use more of an “attached” format here, with a little space in the back, or a 7000sf (sixth of an acre) plot. This translates into $2.4m*6=$14.4 million per acre land and other costs. 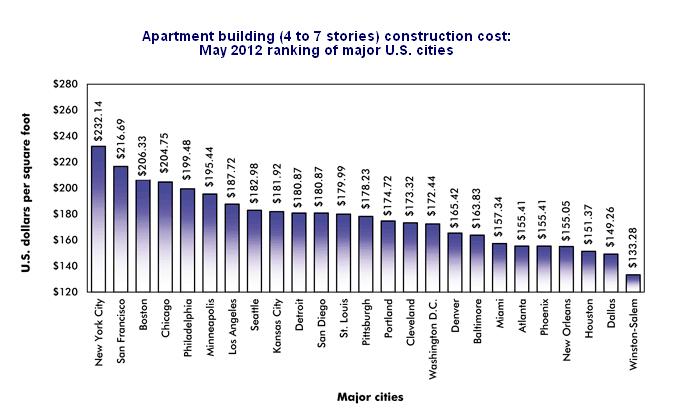 A little math shows that $50,000/120sf is $417/sf, which is a pretty common price for midrise/highrise apartments in all but the most expensive metro areas.

Europe is full of fantastic neighborhoods with this basic format, of six-story masonry construction, possibly with retail on street level. Practically all of Paris fits this model. 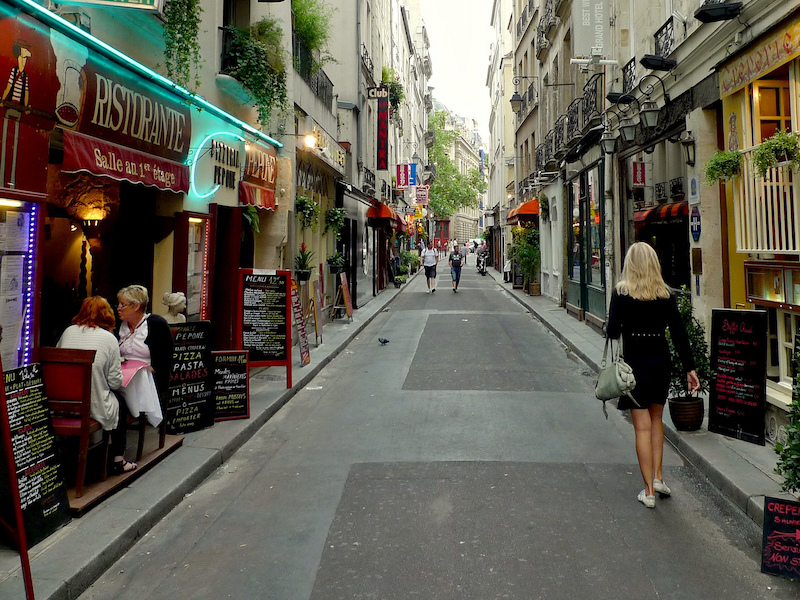 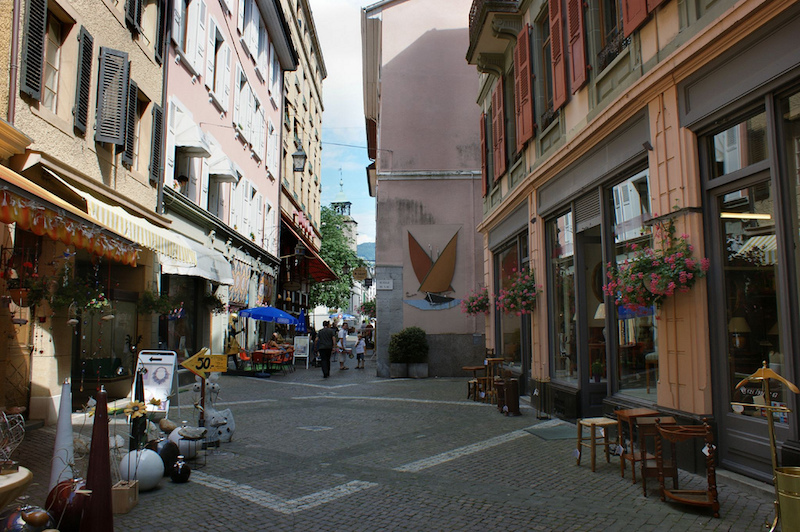 This is very small by any measure … but, it is still larger than the “tiny houses” that people build on trailers, which average about 100sf. This family of four lives in a 165sf house they built themselves. Are they poor? No: after losing their previous 1,500sf home to foreclosure, they have found financial freedom, because they are debt-free and their housing expenses have fallen to near zero. This family of fourteen lives full-time in a single RV. For them, this is not grinding poverty, but rather, an exciting adventure. For some reason, if our houses have wheels or sails, their tiny size does not bother us.

Here’s a 120sf apartment in Toronto: 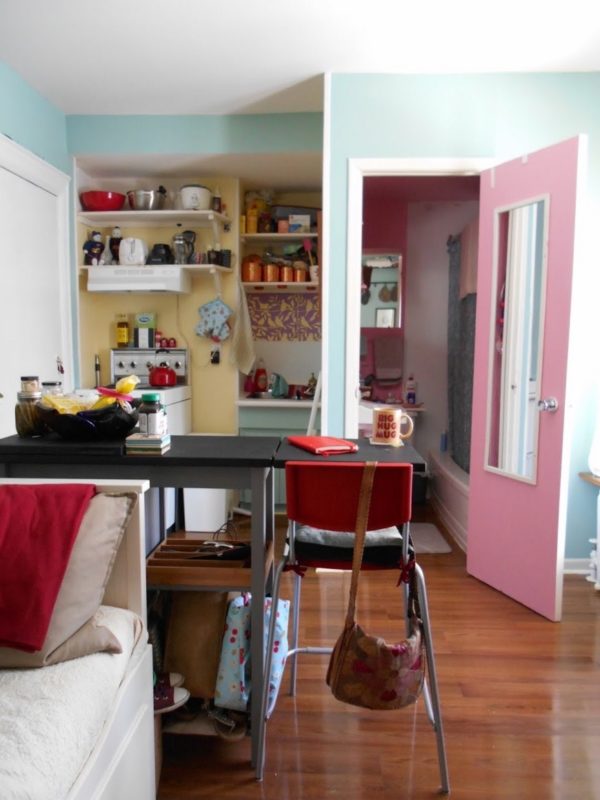 Here’s a 120sf apartment in Paris: 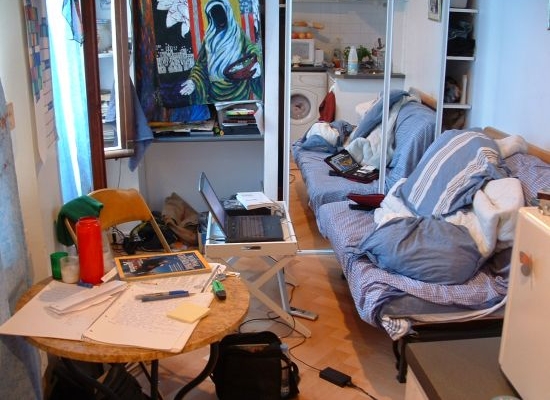 Wired did a story on this 130sq ft apartment in Paris.

Now let’s go a little farther, with “midrise” construction of about twelve stories. We still have a 6000sf footprint, and forty 120sf units per floor, for a total of 480 units. Everything else is basically just the six-story example times two. We could have land costs of $28.8 million per acre. It could look like this: 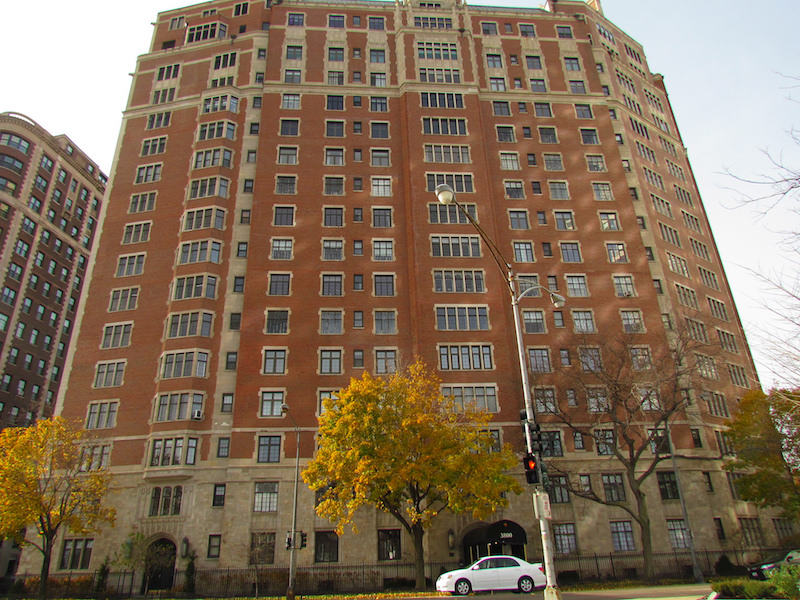 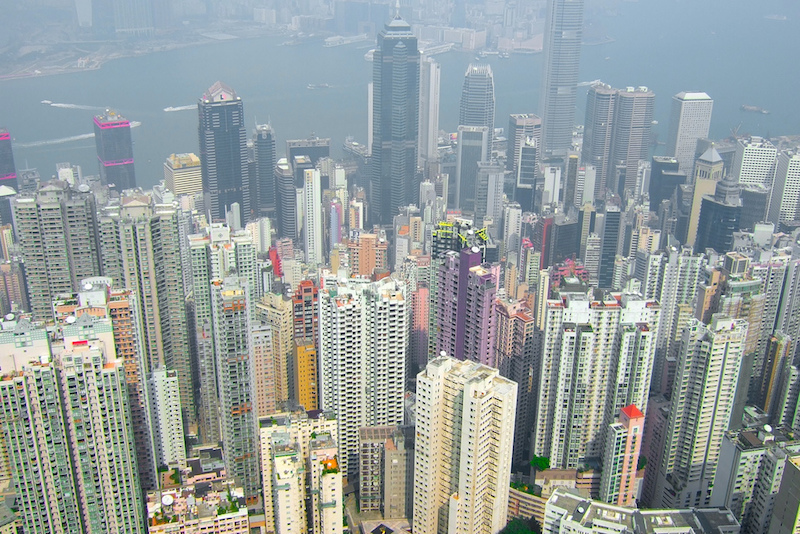 If you had a building footprint ratio of 60%, 25% parks and squares, 15% roadway and these 70 story buildings with 2800 120sf apartments per building, you could build 7.8 million housing units per square mile — or, 1/47th of the land area of the City of San Francisco (population 864,000). Everyone could live within walking distance of one single BART station, with seven million apartments to spare. I don’t think I would recommend that. But, nobody could complain about a “housing shortage.”

For San Francisco, probably the four-story and six-story models are best, since San Francisco is basically a lowrise city. Paris is also a lowrise city that rarely rises above six stories; and yet, the population density of the city of Paris (55,000 per square mile on average) is three times greater than the city of San Francisco (18,500), and seven times that of Oakland (7,417). Some of the arrondisement exceed 100,000 per square mile. A lot can be done within the lowrise format. Perhaps there would be a few midrise units over six stories, and even some highrise, probably around the downtown area.

Probably, most people would not want to live in such a small living space. They would be willing to pay more, and get more. By considering the $50,000 option, we effectively consider everything in between: $80,000, $100,000 or $150,000 options as well, up to the $5 million townhouse. But, there would always be something that people could afford, in any neighborhood.

As living spaces become smaller, what’s outside the door becomes more important. I’ve included here some examples of what I call the Traditional City, which can work easily with this small-apartment format. It is very different from the harsh and ugly Nineteenth Century Hypertrophic City format of San Francisco today.

The Nineteenth Century Hypertrophic pattern is characterized by overly large roadways dominated by automobile traffic. Not only does this waste an enormous amount of valuable space, it tends to produce an environment that is dismal and bleak, and unsuited for families. While any city needs some larger Arterials for vehicular transport, most streets can be much more human-friendly than this. 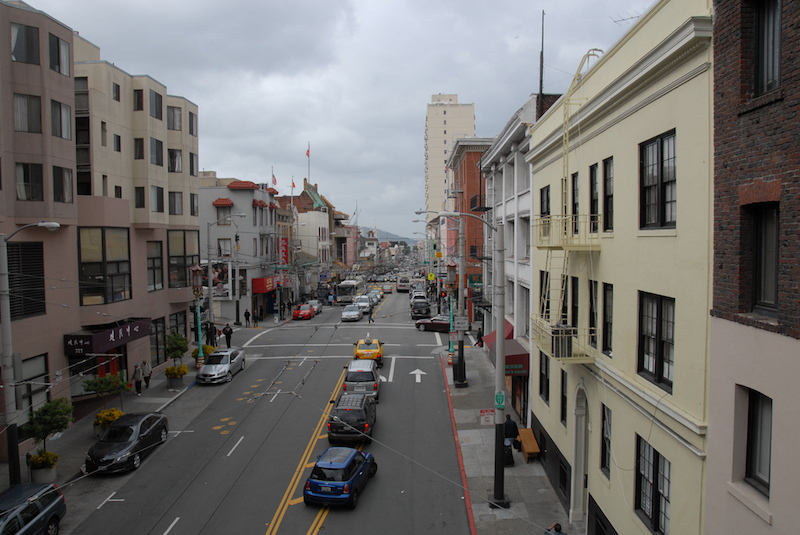 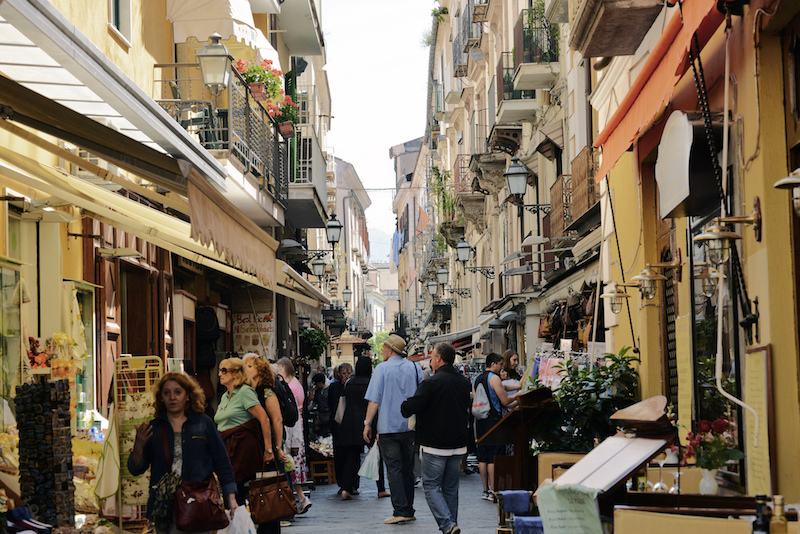 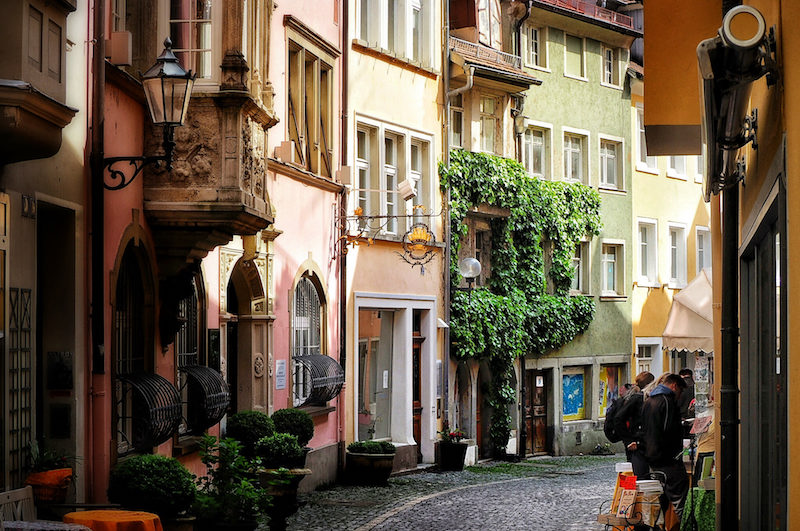 In many situations, it is not at all easy to change the existing street structure. But, in other cases, defining the street design is not only easy, it is necessary. Google wants to build 10,000 housing units near its headquarters in Mountain View, possibly using the 1000-acre site of an old airfield. In this case, the development could easily incorporate Traditional City principles including Narrow Streets for People, instead of replicating past error. Tiny apartment living would not only be cheap, it would be beautiful. And, you could walk to work.