(This item originally appeared at Forbes.com on February 25, 2016.)

There’s one chart that can make some people into instant gold standard converts. 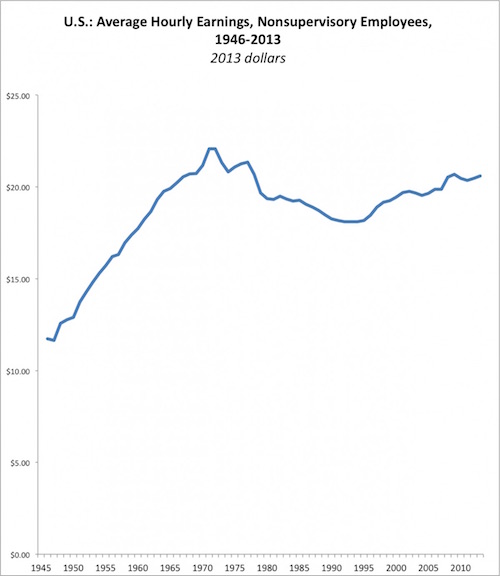 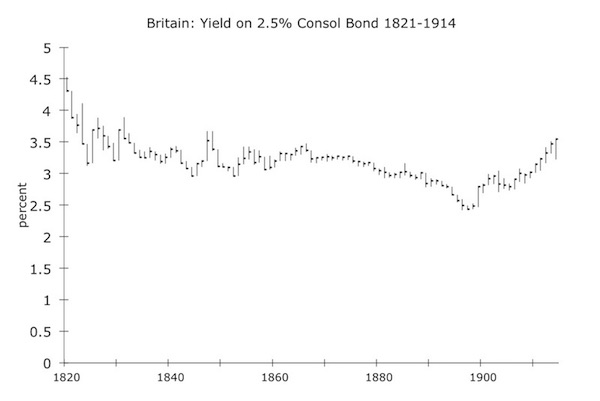 This is a graph of British consol bonds, from the resumption of the gold standard (after the Napoleonic Wars) in 1821, until the outbreak of World War I – nearly a century.

The consol bond was a government bond of infinite maturity. Governments don’t even attempt to issue such bonds today. People would laugh.

The government bond yield, as any textbook will tell you, is one of the best indicators of macroeconomic stability. And the consol bond yield was very, very stable. It averaged 3.14% during this entire time period. Not only that, but it was unbelievably stable from year to year, varying for this entire period – roughly three human generations – within about fifty basis points (half a percentage point) on either side of its long-term average.

This is what capitalism is supposed to look like. It’s what it did look like, in the pre-1914 gold standard era.

Professional asset managers – people who have spent their adult lives looking at market prices, and ignoring the opinions of economists – know that they have never seen such a thing in their lifetime. It’s true that, today, with the most overt manipulation we have ever seen, bond yields are at similar levels. But do you think central banks can keep it up for a century? Ask “bond king” Bill Gross what he thinks.

Economists today will swear up and down that their funny-money schemes will produce macroeconomic stability and stable prices. Oh really? Then why, in the 45 years of floating-currency chaos since 1971, has no central bank in the world been able to produce a result even remotely resembling this?

Is it possible that currencies that flop up and down unpredictably all day are, actually, a source of macroeconomic instability?

Unimaginable, I know. But, think about it.

The principle behind a gold standard is to make a currency that is as stable in value, neutral, unchanging, and reliable as possible – the monetary equivalent of a standard of measure like a kilogram or meter. As George Gilder expressed in much greater detail in his book The 21st Century Case for Gold: A New Information Theory of Money (2015), money is the communication system of the economy. When the communication system is garbled by chaos and noise, and purposeful distortion by well-meaning incompetents, mediocrity – and worse – is the result.

Economists today will tell you all sorts of fairy tales about the gold standard era. Just look at the chart. Just try to imagine any way — any possible way – you could produce a result like this without a gold standard system.

People then couldn’t either. That’s why everyone in the world imitated Britain’s example.

You’ve seen the century-long track record for gold. (And I could add more centuries if you like.) It’s as close to perfection as anything you will ever find in the world of economics.

Now, look at the historical track record for:

The track record is either laughable – people actually took “monetarism” seriously until Paul Volcker tried it in 1979-1982 – or nonexistent.

For me, this is easy.