A Brief History of the Britsh Pound
September 11, 2011

Sorry for being gone for so long. I was out of the country for a while, and although I brought a notebook computer, I didn’t have the software to update the website.

Things are still getting up to speed, so I thought I’d just introduce some lovely long-term charts from this website: www.measuringworth.com. You know I love those long-term charts.

Today, we have a brief history of the British Pound. The pound originally meant a one full pound of silver, or the equivalent amount of gold. Since silver traded at about a 16:1 ratio with gold, a pound of silver was worth about an ounce of gold (actually, it was worth a little more because the troy pound has only twelve ounces).

Wikipedia on the history of the British Pound

Over time, the “British pound” was regularly devalued, which is why nobody wanted to lend money to the unreliable King of England, except at a high interest rate. In 1689, by a quirk of royal succession, William of Orange, a Dutch prince, became King of England. He found the British monetary system and financial system to be in pathetic disarray compared to the example set by Amsterdam, which was then the financial capital of Europe. William set about cleaning things up, and in 1698 arranged for a recoinage of the British pound and the start of the glorious era of the Gold Standard in Britain. 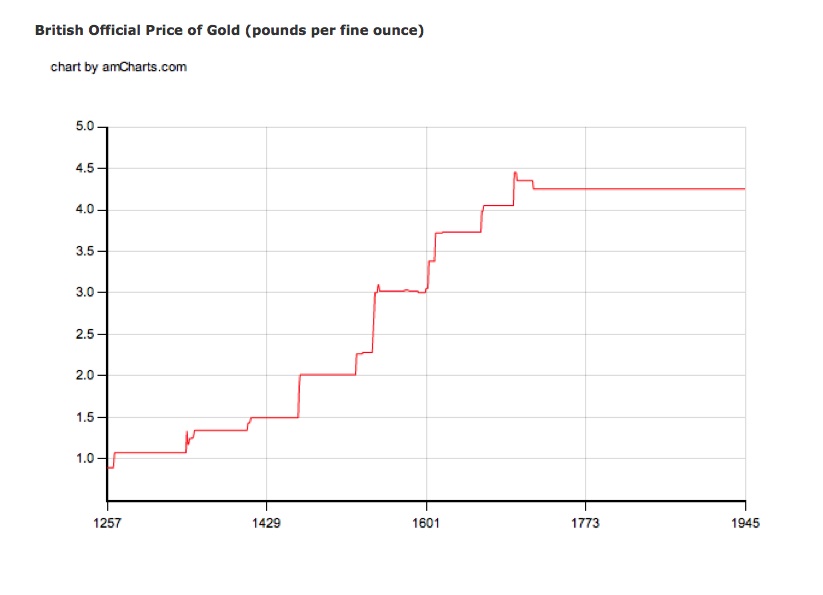 This is the “official” price of gold, which doesn’t include some monkey business around 1798-1821 or after 1931, when the British pound floated free from its golden anchor. But, you get the general idea nevertheless. 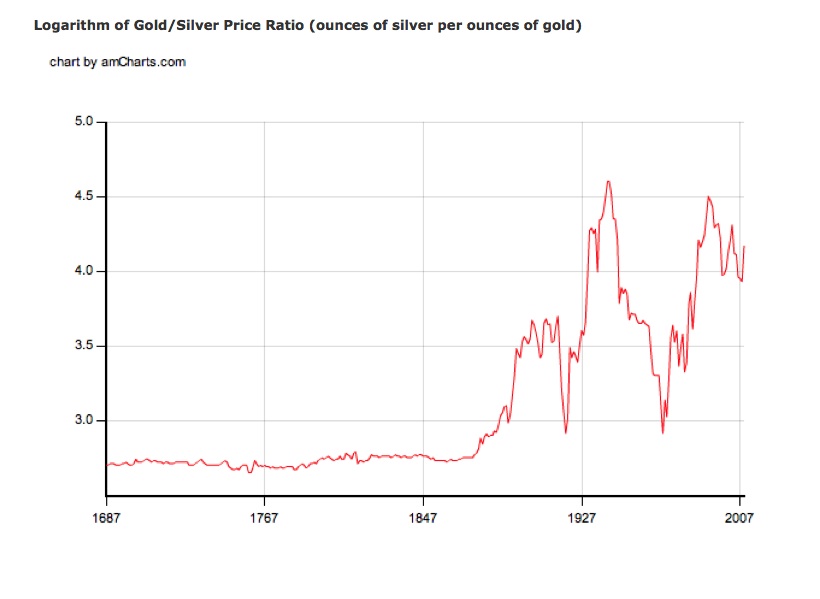 Here is a pretty good graph of the gold/silver ratio since 1687, showing as I have said that this ratio was very stable for hundreds of years around 15:1 or 16:1 up until the mid-1870s. This is why I say that gold and silver were somewhat interchangeable, like dollar bills and ten dollar bills, and that the silver-centric systems prior to 1870 were equivalent to a gold standard system. 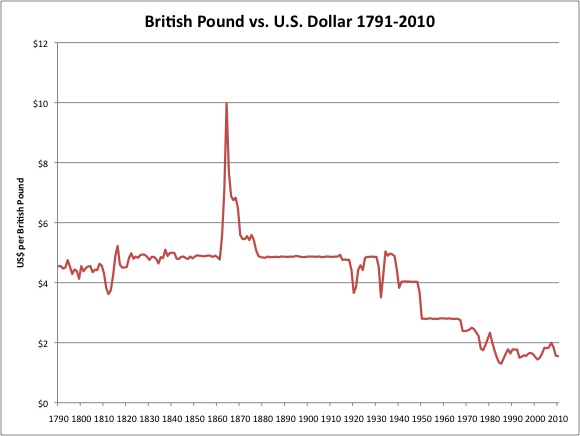 This is a graph of the exchange rate between U.S. dollars and British pounds, from 1791. The fluctuation prior to 1860 is not surprising because there was no standardized national currency in the U.S. before then, only currency issued by small private banks. If you were British, what would you pay for a banknote from the Bank of Libertyville, Tennessee? Probably not its full face value. Also, there was some funny business as the British pound floated in the 1798-1821 period, and the U.S. dollar was also rather dubious in the 1812-1816 period. The big spike is of course the devaluation of the dollar during the Civil War.

Afterwards, we can see more difficulties for the British pound during World War I, then again in 1931, World War II, and two postwar devaluation in 1949 and 1968. By that time, nobody was taking the British pound very seriously anymore, as it was being regularly devalued by the “King” or in this case the government, rather like the bad old days of the 17th century. In the floating currency era after 1971, the British pound has again had a tendency to drift lower vs. the dollar, unlike the German mark, Swiss franc or Japanese Yen, which have generally drifted higher. 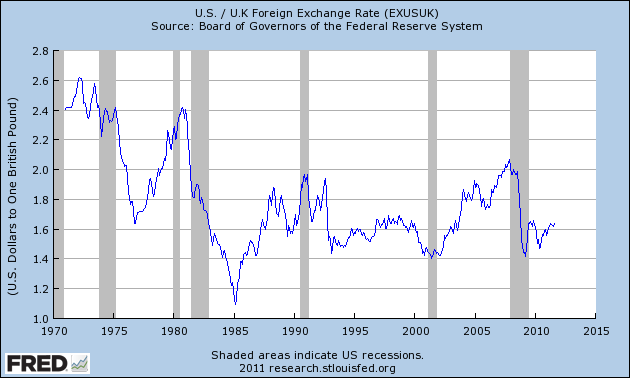 Here’s a closeup of the period since floating currencies were introduced in 1971. 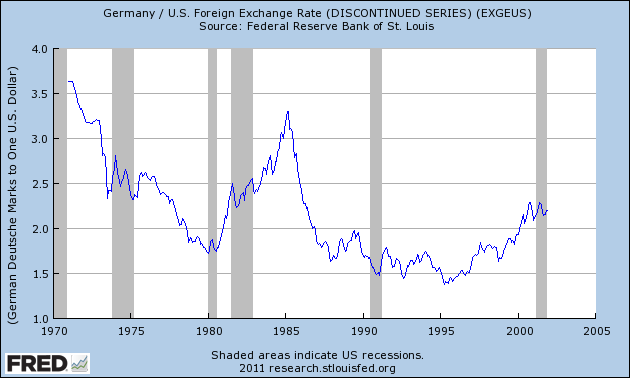 German mark vs. the U.S. dollar until the advent of the euro in 2001. These graphs date from 1971. Before 1971, these currencies had fixed exchange rates vs. the dollar in the context of the Bretton Woods system, so you can pretty much just extrapolate a straight line back to 1950 or so. 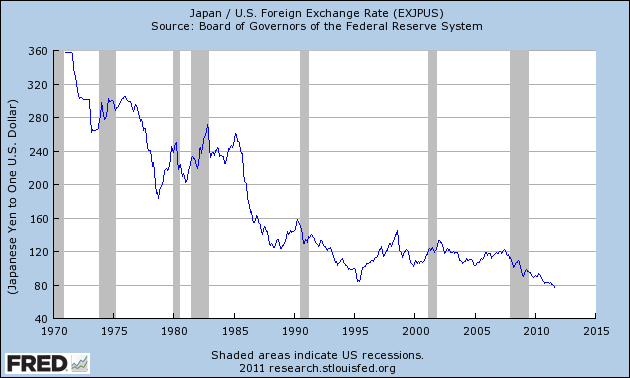 During the Bretton Woods days, the yen was at 360/dollar. 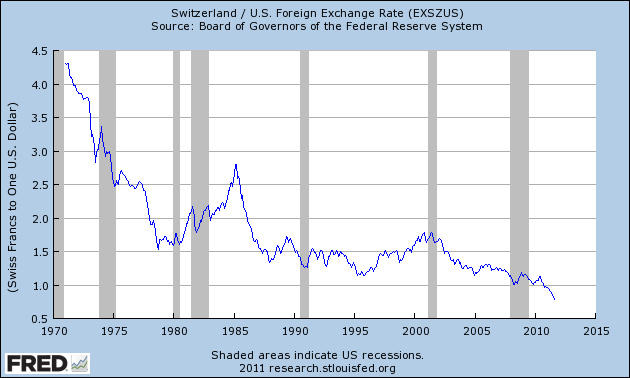 Like today, the Swiss franc was a “safe haven currency” during the inflationary/dollar devaluation days of the 1970s. Like today, Switzerland eventually put a stop to the continuous appreciation due to the effect on trade and exporters. It’s the same thing over and over again.