I heard of this book via William Lind, the military/politics commentator. It is a chronicle of a great empire in decline. At one point, Spain’s territories stretched from the Philippines — named after King Philip II of Spain — to California, which was named by Spanish explorers in the 16th century and is derived from the Latin calida (“hot”) and fornax (“furnace”). By the Treaty of Utrecht of 1713, Spain’s decrepit Hapsburg dynasty could not even replicate itself, and the country passed to the rule of the Bourbons, which is to say, the French royal family. At this point, a new French-speaking administration was introduced, which cleared out the old government, and the country began to revive itself although it never again achieved greatness.

I would like to say a lot more about this book. That is why I haven’t written about it so far, although I read it several months ago. I hope that at least I can give a little impression, and you can go read the book yourself.

For the most part, the book is a standard history, which reads like a succession of newspaper headlines. It was first published in 1963. It consists mostly of the comings and goings of monarchs, alliances and changes of borders, mostly involving warfare. Probably any history needs to start here, and, when you are talking about two and a half eventful centuries, you can fill a whole book up without talking about much else. There is little about the economics of the situation, which I consider one of the primary drivers of the expansion and contraction of empire. A government with a strong economy has the material wealth to back expansionary policies, and also has a moral superiority, for the simple reason that it is successful and people recognize that. The beneficial rule is appreciated. A government with poor economic policies soon finds that it no longer has the wealth to finance its military, while at the same time its existing territories begin to revolt against the hated and oppressive rulers, and the empire contracts.

Thus, it is, I would say, a boring book, of the sort you were forced to read in high school, without the sort of themes I just mentioned which could tie together these great movements of history. It serves, like many books, as a source of raw material.

One of the interesting aspects of this long period of decline was that it was not, for the most part, characterized by the sort of psychotic, megalomaniac emperors that Rome had during its decline. One of the central figures was the Count-Duke Olivares (1587-1645), who was prime minister during the time of greatest collapse. The Count-Duke, as portrayed in the book, was by all appearances genuinely devoted to public service. He was energetic, charismatic, decisive, and intelligent. He also held about as much power, as the prime minister and king’s favorite, that any one minister could hold in any society. He immediately began a reform program of the greatest ambition. Nevertheless, the result was disaster.

William Lind characterizes the government’s response to the endless crises of the day as: “they abolished the ruff.” The ruff is that dramatic wheel of lace that sits around the neck in old portraits. 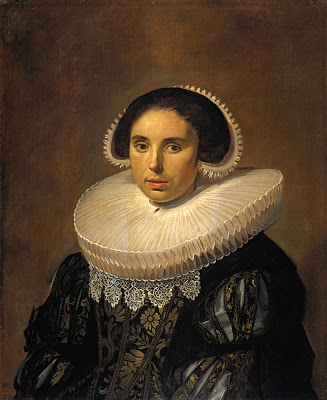 The book is mostly a record of the frenzy of activity that consumed the government during that time. Revolts in the (Spanish-owned) Netherlands, demands from nobles, political alliances, court intrigue, the endless press of bills to pay, the struggle to build political consensus, this, that and the other policy experimented with. And yet, throughout all this activity, all of which seemed very important at the time, essential even, which goes on for page after boring page, we get the impression that nothing much of real meaning was actually accomplished, except for some sartorial changes as noted by William Lind.

To us students of economics, the most important things are only hinted at. Within chapter after chapter of the comings and goings of ministers and aristocrats, of policies and treaties and agreements, we get a few crumbs that suggest where the crisis was ultimately stemming from.

In 1627-8 the condition of the Castilian economy suddenly deteriorated. The country found itself faced with a startling rise in prices in vellon currency (fiat currency), and the Government was assailed with complaints about the high cost of living. It is probable that the inflation of these years was caused primarily  by bad harvests and by the scarcity of foreign goods arising from the partial closing of the frontiers since 1624; but it was exacerbated by the recent monetary policies of the Crown, which between 1621 and 1626 alone had minted nearly 20,000,000 [silver] ducats’ worth of vellon coins. [The government was financing itself by issuing fiat currency.] Olivares had hoped to deal with the problem of inflation by relatively painless methods. But drastic action became essential after the failure of an attempt at price-fixing and of an ingenious scheme for the withdrawal of the vellon coins from circulation, and on 7 August 1628 the Crown reduced the tale of vellon by 50 per cent.

The great deflation of 1628 brought heavy losses to private individuals , but instant relief to the royal treasury.

Are you getting a feel of why the Netherlands and eventually Portugal decided to separate themselves from Spain?

In the midst of this environment of oppressive taxation and monetary chaos, in which productive enterprise had been snuffed out generations previous, everyone with talent and ambition sought to become a part of the Church or State; in other words, among those who extracted the production of others.

Inevitably, therefore, as grandees and lesser aristocrats drifted to Court, they were followed by thousands who either possessed, or aspired to, a place in their service. At a time when the population Castile had fallen, that of Madrid [the capitol] continued to grow: from 4000 in 1530 to 37,000 in 1594, to anything between 70,000 and 100,000 in the reign of Philip IV. The Court acted as a great magnet, drawing to it from all over the country the rootless, the dishonest, and the ambitious. …

Everything, then, conspired to attract the population to the economically unproductive occupations in society.

Too bad they didn’t have “financial innovation” in those days.

The Spanish tax system had evolved into the most oppresive sort, which had heavy levies on the productive middle class while exempting nobility from taxation entirely.

As the yield of the alcabala [a sort of sales tax] declined, that of the servicios increased; and during the course of a reign in which prices doubled, the monetary yield of the servicio nearly quadrupled. … [T]he effect of the change on Castilian society and the Casstilian economy was very marked. … The payment of the servicio … was customarily limited to one section of society, the pecheros or taxpayers, while all those enjoying privileges of nobility were exempt. …

The increase in the rate of the servicios therefore had extremely important social effects, in that it tended to widen the gulf between the exempt rich and the overburdened poor, and at the same time induced wealthy merchants and businessmen to abandon their business and buy privileges of hidalgua [a low-level title of nobility] in order to escape the burden of taxation.

The contempt for commerce and manual labor, the lure of easy money from investment in censos and juros [mortgage lending and government bonds], the universal hunger for titles of nobility [tax exemption] and social prestige — all these, when combined with the innumberable practical obstacles in the way of profitable economic enterprise, had persuaded the bourgeoisie to abandon its unequal struggle, and to throw in its lot with the unproductive upper class of society. …

‘There are but two families in the world,’ as Sancho Panza’s grandmother used to say, ‘the haves and the have-nots’; and the criterion for distinguishing between them ultimately lay not in their rank or social position, but in whether they had anything to eat. …

The best guarantee of a regular supply of square meals was, by tradition, service in Iglesia, o mar, o casa real — Church, sea (trade), or the royal service (at the Court or army). By the seventeenth century the refrain had been narrowed down to Iglasia, o casa real. Castilians from all walks of life had come to look, as a matter of course, to the Church, Court and bureaucracy to guarantee them the living which they disdained to earn from more menial occupations, and once despised and unrewarding.

The reasons for the decline of the Empire seem pretty obvious now, don’t they?

I’ll end with one last note on the monetary chaos of the time.

The currency of Castile was now approaching the climax of its giddy career. In the last years of the reign of Philip IV, the premium on silver in terms of vellon rose to 150 per cent, and the last monetary measure of the reign — a deflationary decree in October 1664 — failed to reduce it for more than a few passing moments. By the middle of 1665 it was up again to 115 per cent; it reached 175 per cent by 1670 and 200 per cent by 1675. There was a sharp rise in Castilian commodity prices during the 1670s, and by the end of the decade a fresh attempt at deflation became inevitable. It came on 10 February 1680, when the ‘good’ vellon minted since 1660 was deflated by one half. The decree brought a violent collapse of prices, and produced a succession of bankruptcies from the Crown downwards. There was widespread recourse to barter; riots occurred in Toledo and Madrid; the royal family could not even raise sufficient funds for its annual trip to Aranjuez; and — more serious — the last remnants of Castilian industry were destroyed.

Although, as I have said, it is a boring book, it has a lot of interesting material, especially today when similar things are happening.