I thought it would be interesting to look at the evolution of the U.S. currency system, particularly in the pre-WWII period.

Here is the relevant graph. The source of the data is: 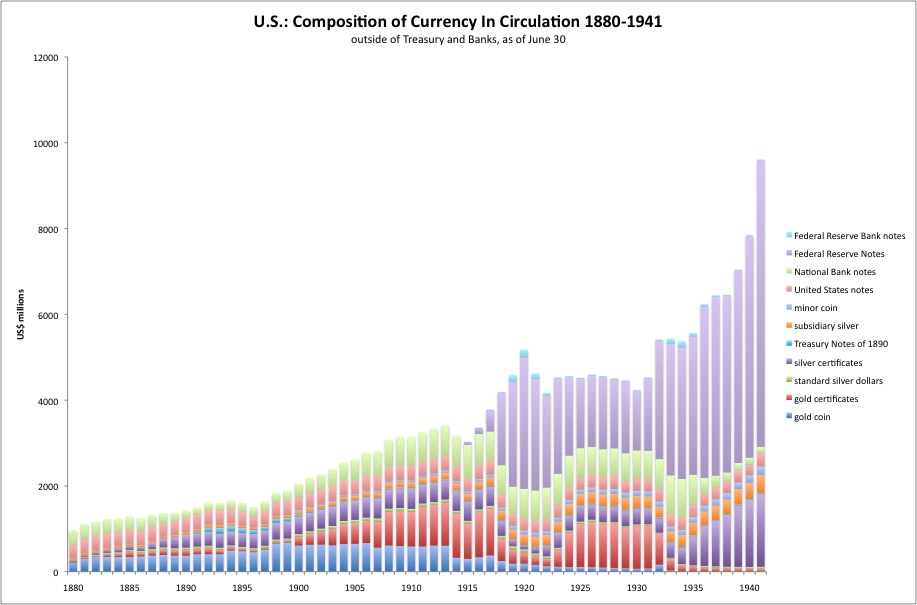 Today, we use Federal Reserve Notes pretty much exclusively for our currency. However, it was not always that way — certainly not before the Fed was created in 1913. As you can see, there was quite a menagerie of stuff out there. What is this stuff?

Federal Reserve Notes are the “dollar bills” we use today.

National Bank Notes are notes issued by private commercial banks. This was organized under a system known as the National Bank System. There were over three thousand commercial banks issuing their own bank notes, each one with their own design, all of them linked to gold of course. This system pretty much died out in the late 1930s.

United States Notes are the “greenbacks” printed by the U.S. government during the Civil War. For the most part, they remained in circulation, and are now collector’s items.

Subsidiary silver is silver coins in less than a one-dollar denomination, namely, quarters and dimes.

Treasury Notes of 1890 were something issued in 1890 by the U.S. Treasury. They were significant for a few years.

Standard Silver Dollars were $1 silver coins, such as Morgan Dollar and Peace Dollars.

Gold Certificates were notes issued by the U.S. government, redeemable in gold. Wikipedia on gold certificates.

Gold Coin is, you guessed it, coins made of gold.

Here is a simplified version of the same chart, showing the ratio of metal coins to paper money, during that time period. 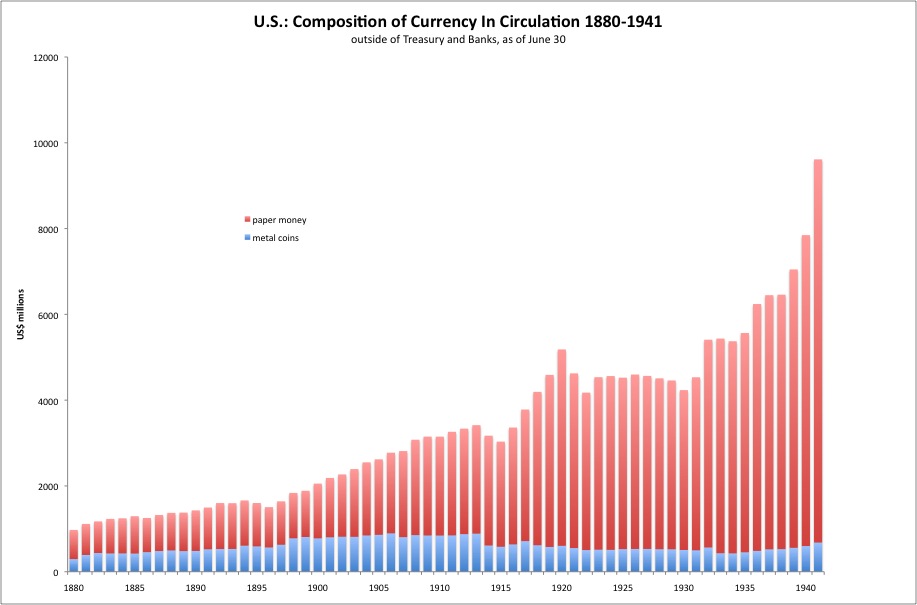 What we can see here is that gold and silver coins made up a relatively small fraction of U.S. currency, even in the 1880s, and certainly by the 1920s the currency in use was overwhelmingly paper. The notion that a gold standard system means “gold and silver coins” is exceedingly antiquarian, and was not the case at all during this period in the U.S.

That the Federal Reserve Note should become popular, and in the end the sole type of U.S. currency, is not particularly surprising. People want uniformity in their currency.