Without question, the Great Depression was a time when the political consensus moved from a Classical “hard money” approach towards a Mercantilist “soft money” approach — leading, ultimately, to today’s “print until the pain goes away” reaction. Actually, this trend had started in the later 19th century, and was not fully expressed until the 1970s – an evolution stretching over a hundred years or more. But, the experience of the Great Depression period of the 1930s still serves as justification, today, of all kinds of currency-jiggering nonsense.

Beginning with Britain in September 1931, currencies around the world were devalued. The British pound was the world’s premier international currency at the time, and also the premier “reserve currency” in the sense that other central banks held British government bonds as reserve assets.

By some measures, this was a success: industrial production indeed improved in many countries, after they devalued their currency. 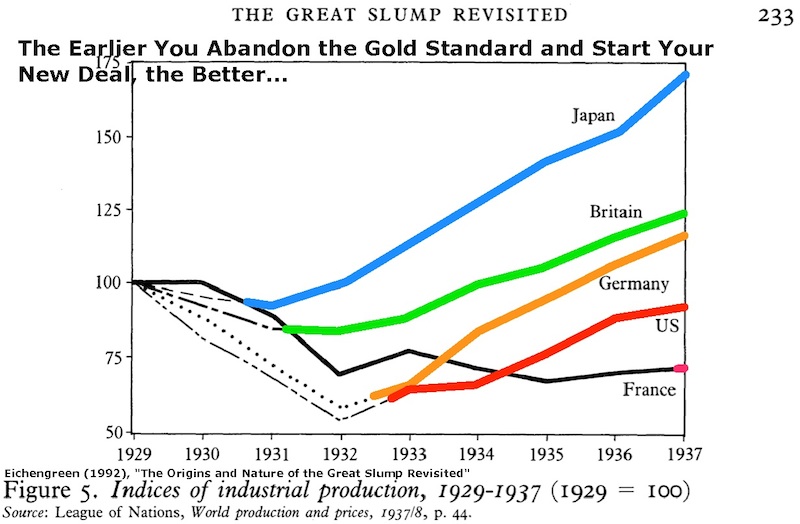 For some reason, this one statistic has taken on totemic significance. As an emerging markets macro analyst for several years, I saw the effects of several devaluations upfront, and I have to say it is not some kind of Economic Christmas where goodies fall from the heavens, and there are never any consequences. Remember the Mexican devaluation of 1995, the so-called “Tequila Crisis”? How about the Argentina devaluation of 2001, or the Ukraine devaluation of 2008? The fact of the matter is, we have done this many, many times and the results are usually not too pretty.

They weren’t too pretty in the 1930s either, which is why these governments soon abandoned the strategy, and agreed not to engage in any more “currency wars.” This was formalized in the Bretton Woods agreement of 1944, in which 44 countries agreed to behave themselves, and return (mostly) to the Classical principles of pre-1930.

Governments have been devaluing currencies for literally thousands of years. Can there be short-term benefit? Of course. They wouldn’t do it otherwise.

There is a lot one could say about this one topic. Here are a few things to think about:

1)   This was not a floating currency policy. These were one-time step-devaluations. The U.S. did not leave the gold standard system, but rather devalued the dollar from 1/20.67th of a troy ounce of gold to 1/35th, the value it maintained until 1971. Other countries actually did introduce floating currencies, to their detriment. The U.S.’s decision to remain on a gold standard system after 1934 is one reason the U.S. dollar usurped the British pound to become the world’s primary international currency. 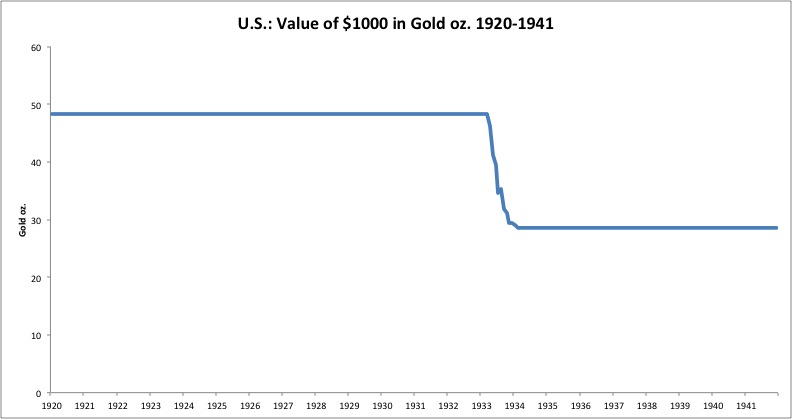 2)   This provides no justification for today’s floating currencies, interest rate management, and all the other funny-money games. That plainly did not happen here.

3)   This was a time of extreme crisis. During 1931-1932, there was a wave of sovereign defaults, on top of waves of bank and corporate defaults. It was a time of emergency measures. Might a currency devaluation be a tolerable emergency measure in a once-a-century catastrophe? Maybe. But it would be better to avoid such catastrophes to begin with. What does this have to do with the FOMC getting together to jigger interest rates every six weeks?

4)   You don’t see the bad stuff. When the value of the U.S. dollar fell by 41%, from 1/20.67th of an ounce of gold to 1/35th oz., the value of all wages was also devalued by the same amount. In other words, people were effectively paid 41% less. This is one reason employment and activity improved: corporations were given a gift of radically slashed labor costs. The unemployed were helped, but at the expense of the employed. While such measures might be tolerable in a crisis situation of soaring unemployment, a nation does not become wealthy by chronically making workers poorer. The world is full of cheap labor; the miracle of the developed economies is their high incomes, not low ones.

5)   It was effectively a type of government default. When the British pound was devalued (by roughly the same 40%) in 1931, all holders of supposedly “risk free” British government bonds, worldwide, took a giant loss. Imagine that you were, for example, a foreign central bank holding British government bonds as reserve assets, or a commercial bank with British-pound-denominated debt as assets. The central bank would immediately have insufficient reserve coverage for its monetary liabilities, potentially inviting an echo devaluation. The commercial bank would be insolvent. Thus, these devaluations, particularly for international currencies like the British pound or the U.S. dollar, led to waves of financial failures worldwide. That’s why they called it “beggar thy neighbor” devaluation. 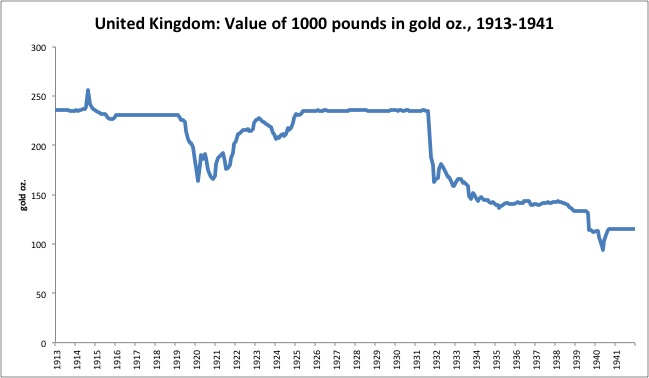 But what if you hadn’t devalued, like France? Now, exporters’ business was collapsing, due to no fault of their own. Domestic businesses found that they were uncompetitive with a wave of cheap imports, and closed down. Whatever advantage one country enjoyed in the “currency wars” was matched by hardship elsewhere. That is why countries tended to suffer until they too devalued, to bring exchange rates back in line.

When one country devalues today – such as Mexico – it doesn’t upset the overall situation that much. But, when major international currencies devalue, the resulting trade effects are such that governments around the world tend to get pulled into the devaluation vortex. This happened in the 1970s, when the U.S. dollar was devalued. Other countries ended up doing the same, so that exchange rates wouldn’t get too out of line. 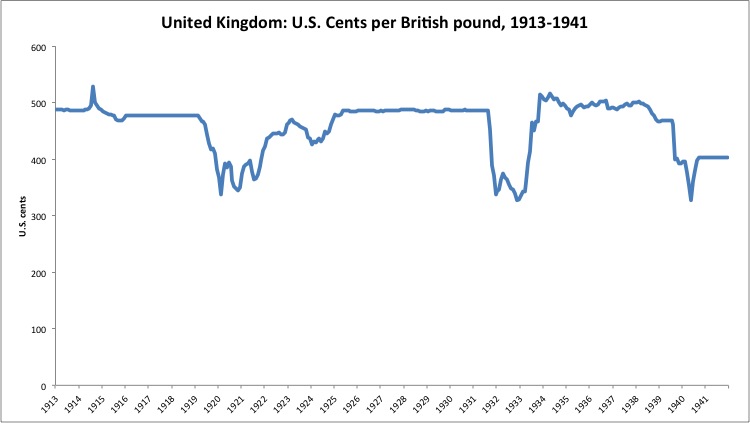 After Britain devalued in 1931, other countries, including the U.S., devalued to normalize exchange rates.

The “currency wars” of the 1930s added a new element of chaos and uncertainty in what was already a very difficult time.

8)   It is not just a question of devaluing or “doing nothing”. For some reason, people become fixated on the notion that the alternative to currency devaluation is to sit around and do nothing. Eh? The best thing would have been to avoid the catastrophic errors (mostly tariff wars and tax hikes, leading to sovereign default and systemic collapse) that created the crisis situation in the first place. Otherwise, you could do something to remedy the underlying cause of crisis. Why did Japan seem to do so much better than Britain or the U.S.? One reason was that Finance Minister Takahashi Korekiyo avoided all the “austerity” tax hikes and tariff wars that had become fashionable in the Western world. As the Japanese economy was militarized in the 1930s this was accomplished in part by offering corporations various tax breaks if they participated – in effect, a series of tax cuts.

9)   There was more going on than just currency stuff. One major reason for the recovery of the U.S. economy after 1933 was the stabilization of the financial sector, with the “bank holiday” which helped resolve insolvency concerns, and also the introduction of deposit insurance.

10) Devaluation has different effects depending on the situation. For example, in most countries, corporate (and even government) financing is done in international currencies like the dollar or euro, because nobody trusts the local fiat junk. What happens when the currency is devalued? Instead of debt burdens becoming lighter (as was the case in Britain in the 1930s), debt burdens become heavier! This can be quite catastrophic, as was especially the case in Thailand, South Korea, Indonesia, Brazil and Russia in 1997-1998. Unemployment didn’t go down and production didn’t go up – exactly the opposite.

You could add quite a few more points. My conclusions?

Avoid Great Depression-like situations in the first place. “Austerity” leads to disaster – in the 1930s, in 1980s Latin America, and in Europe today.

Take nonmonetary steps first. If preceding administrations have been blowing up the economy with “austerity,” maybe you should reverse these policies. Or, maybe deposit insurance is the immediate fix.

If you find yourself in a once-a-century crisis of 1932-1933 proportions, and you think that devaluation might help, then go ahead and do it. But, stay on a gold standard system. This is what the U.S. did, and the result was plainly better than the alternative of transitioning to a floating currency. By “once-a-century” I mean once-a-century, or less. This is not a justification for devaluations every four or five years (France in the 1950s and 1960s), or for a policy of floating fiat currencies and continuous interest-rate jiggering (today), or printing money because someone thinks it will help get them re-elected (1971).

After the one-time devaluation in 1933, the U.S. stayed with a gold-standard framework for 38 more highly successful years, until the transition to floating fiat currencies in 1971.

The fact of the matter is, once Britain and a host of other countries devalued, the situation tended to impel others to follow, to normalize trade relations.

What does a step-devaluation in the midst of crisis in 1933 have to do with floating fiat currencies in 1971, or today?