(This item originally appeared at Forbes.com on February 2, 2017.)

As we continue to look into a number of issues surrounding the idea of free trade, we come to the problem of free trade within an environment of floating currencies.

First, we should recognize that this is an aberration. It has only really existed since 1971. For a thousand years before then, the world had effectively one currency – the combination of gold and silver, which functioned as a unified system. Anyone who looks at the chaos that we deal with daily can see that currency movements, planned or unplanned, can deliver rewards and punishments that have nothing to do with the relative costs of production or advantages between one region or another. All arguments of “comparative advantage” or “mutual benefit” disintegrate before this roulette wheel of mindless chance or intentional subversion.

This is why Europe, which has always been closely enmeshed in trade, has always sought to minimize currency fluctuations. Before 1971, this meant currencies linked to gold. When the Bretton Woods system broke apart in 1971, the Europeans immediately implemented the “snake” in 1972 and then the European Exchange Rate Mechanism in 1979, both to maintain fixed exchange rates among members. This trend culminated with the introduction of a shared currency, the euro, in 1999.

The United States is large enough that foreign trade is relatively small in relation to GDP. It is less important for the U.S. to maintain stable currency relationships with its external trading partners. Rather, the U.S. uses a single currency between all fifty states. The idea of having a separate floating currency for New York, California and Florida is abhorrent, although these states are larger, in both population and land area, than many European countries. The separate states actually had a hundred-year history of issuing their own floating paper currencies, before the practice was abolished in the U.S. Constitution.

Thus, environments of floating currencies naturally lead to arguments for protectionism. When floating currencies emerged around the world following Britain’s devaluation of the British pound in September 1931 – twenty-two other currencies followed before the end of the year — governments responded with a new round of tariff increases.

The idea of a “competitive devaluation” is actually a lot less popular than people think. The practice of trying to gain an advantage by effectively slashing the wages of workers and partially defaulting on creditors has been shown, over and over, to be counterproductive. Reducing workers’ wages results in poorer people, not richer. Most “devaluations” of the last thirty years or so have been the result of incompetence rather than intent. Nevertheless, whenever there are floating currencies, one goes up and one goes down, with advantage and disadvantage meted out capriciously and without any connection to merit. Mutual cooperation, the basis of all economic activity, becomes difficult and problematic.

Among the great many stupid notions surrounding floating currencies is the idea that, by allowing currencies’ value to float, markets will naturally reach some sort of “equilibrium” that would be reflected in “balanced trade.” This is howling nonsense. No such thing has ever existed. No evidence of any such “equilibrium” has been evident in the last 200 years, within floating currency regimes, or fixed regimes such as the Classical Gold Standard era before 1914, or the eurozone today. These “imbalances” are better understood as capital flows – and when capital is allowed to flow, it flows. The best way to produce “balanced trade” – a goal that is not recommended – is to introduce capital controls. This was common during the Bretton Woods years, 1944-1971. 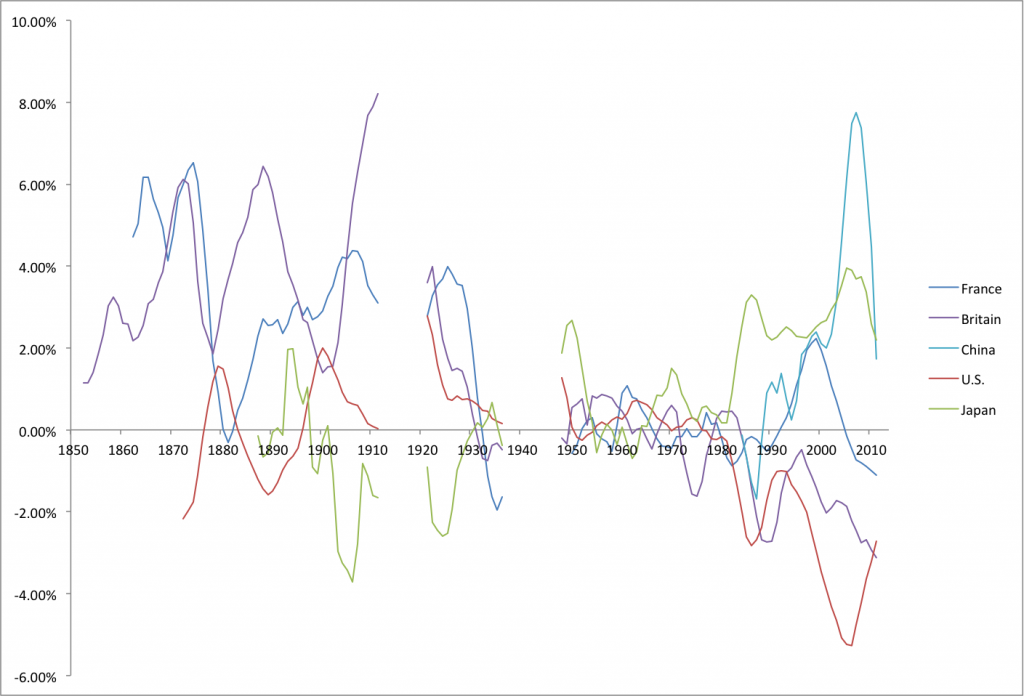 From this erroneous premise naturally derives some equally erroneous conclusions, such as the idea that a country with a current-account surplus (China) should have a higher currency, and a country with a current-account deficit should have a lower currency, and that currency values should change enough to supposedly result in “balanced trade.” (In practice, “imbalances” tend to persist even when there is a major change in exchange rates.) If this does not happen, then accusations start to fly that one country or another is a “currency manipulator,” or is deriving some kind of “unfair advantage.” This has been around a long time. The various arguments directed at China over the past ten years were directed at Japan in the 1960s, equally baseless both times. 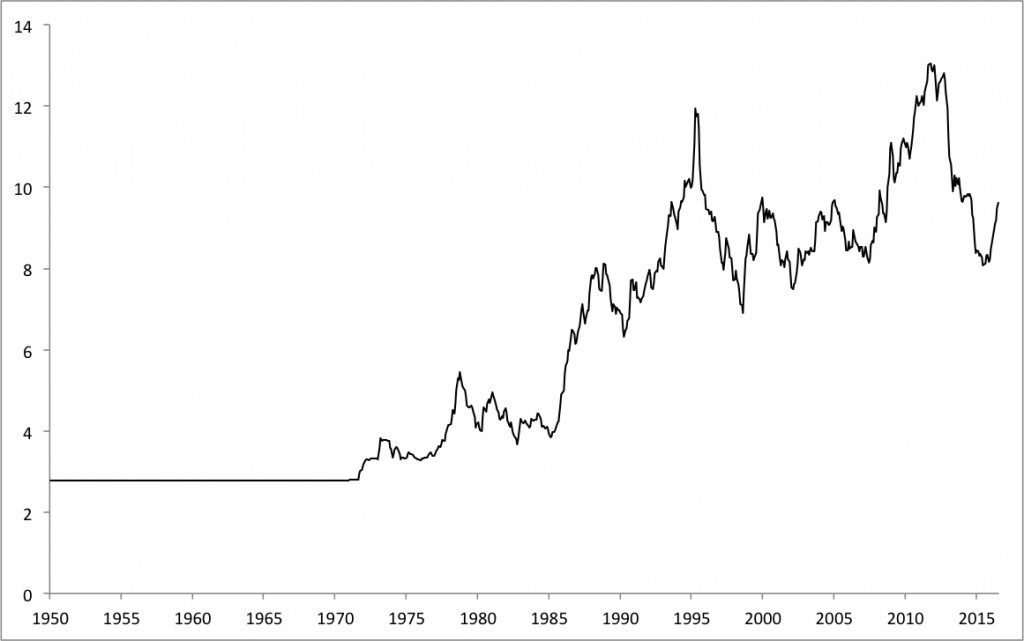 Asians, like Europeans, for the most part understand that trade is facilitated by stable exchange rates. The Chinese “yuan” today derives from the name given to the Spanish silver dollar in the sixteenth century, which was imported by China in huge quantities and formed their primary silver coinage until the twentieth century. This same Spanish silver dollar also was the basis for the U.S. dollar. Chinese were on the “dollar standard” two hundred years before the United States existed. The Japanese “yen” and Korean “won” were basically local pronunciations of “yuan.” More recently, China has had a dollar peg since 1994, although it is more of a crawling peg today, in deference to U.S. pressure. In effect, China has the same currency policy as California. 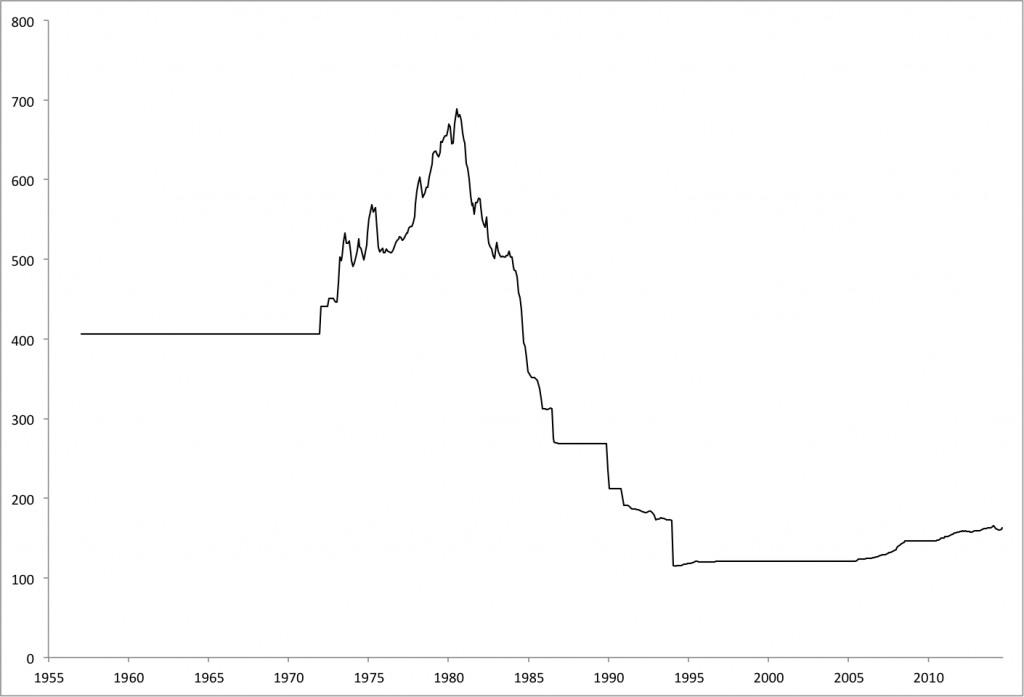 Now, I don’t want to dismiss the challenge posed to U.S. industry, and U.S. workers, by unrestricted trade with China or Mexico. This is real, and though it has had advantages, it has also had disadvantages. I am even willing – hesitant, but willing – to consider that the disadvantages have been greater. But, let’s identify it for what it is, rather than making up fairy tales about “unfair advantage” or “currency manipulation.”

Also, let’s not dismiss the problems caused by today’s floating fiat currencies. “Free trade” has always been based on “fixed exchange rates.” The world used to have a unified currency system, based on gold. Today, it does not. There are plans afoot – described in Jim Rickards’ new book The Road to Ruin – for a unified world currency system, but not based on gold. It amounts to having a Mario Draghi for the whole world. I certainly don’t want that poison clown – or any of his peers or successors — in charge of my money. If you feel similarly, there is really only one option left.