Suburbia doesn’t scale. Most people’s vision of the “suburban ideal” involves large single-family houses on plots of 0.25 to 2.0 acres. This results in population densities of around 1500-4000 people per square mile, and extreme auto dependency. This model is enshrined in the “Small Town America” vision that inspired generations of suburbanites; but it only works when the town is small – and towns stay small because nobody wants to live there, typically because of the lack of jobs. 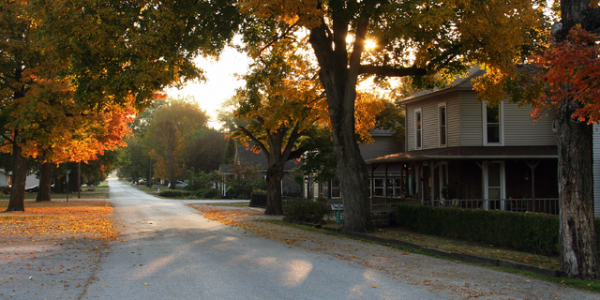 Once population goes up, there are only two alternatives – the city gets bigger, or the city gets more dense. In most any U.S. city today, you can live a low-density auto-dependent suburban lifestyle, at reasonable cost, if you can tolerate living far from the city center. But there is a reason why land values there are low – nobody wants to live so far away. Huge commute times commonly result, and even then, these “exurbs” can be high-priced, a reflection of their extravagant land use patterns. Higher density, within the suburban auto-dependent format – to perhaps the 8000-9000 people per square mile common in Los Angeles – means a lot of automobile traffic, in a landscape dominated by large roadways, parking lots, and freeways. 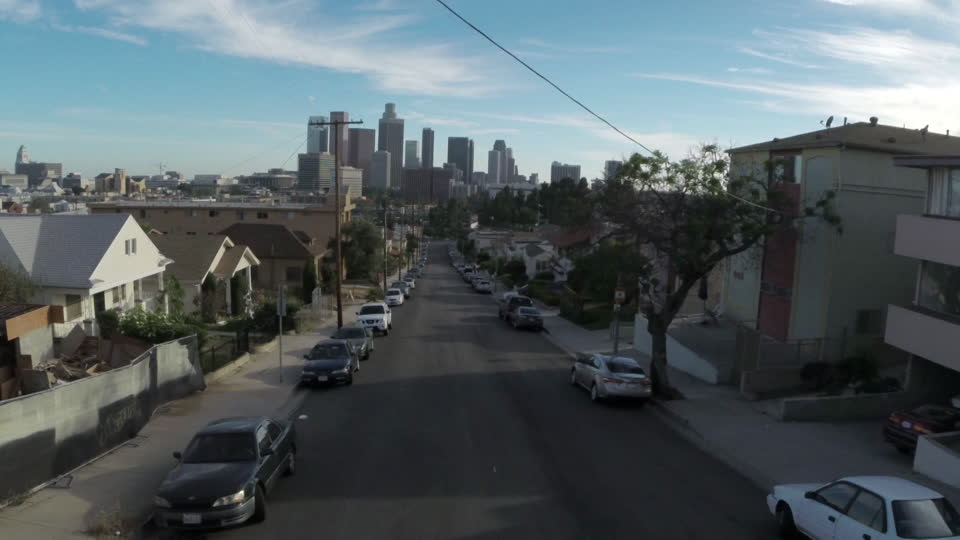 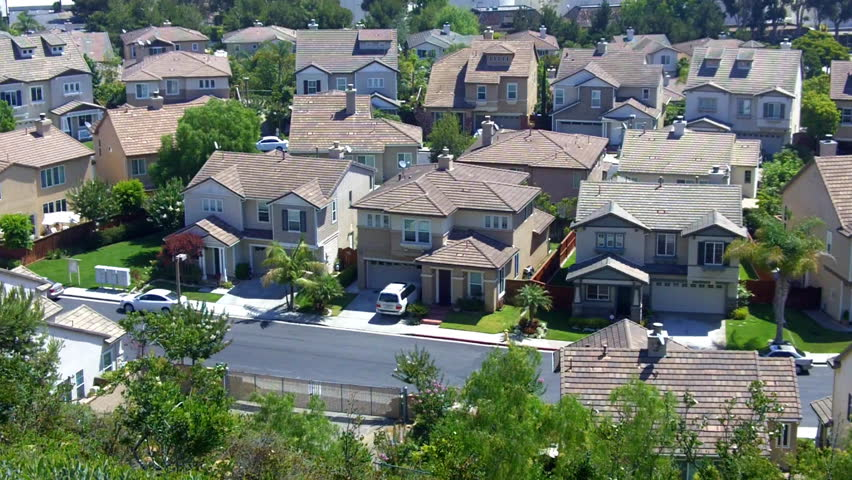 In other words, when you add more people to the common Suburban Hell development pattern, it gets worse and worse.

This produces the common suburban response to any kind of further densification – total resistance to the addition of any new housing stock, commonly with complaints about potential traffic and parking problems. Everyone wants to live in the closest approximation to their “Small Town America” suburban ideal that they can afford; once arriving, they want to block anyone else from making their small town bigger.

Successful forms of urbanism, like the Traditional City format, scale beautifully. This means pedestrian-centric neighborhoods, connected by some form of a transit system, or perhaps within bikeable distances. Beautiful, liveable environments ensue at densities of 30,000 per square mile (common in Japanese singe-family detached-housing “suburbs”) or 60,000 (the City of Paris). Some districts can exceed 100,000 per square mile — and are not clearly worse off for it. Often, these kinds of cities become vacation destinations for wealthy U.S. suburbanites. The world’s largest city, Tokyo, with metro area population of 35 million, has many beautiful neighborhoods in the central city, where many people own cars but traffic and parking are not a problem at all, at population densities around 40,000 per square mile. 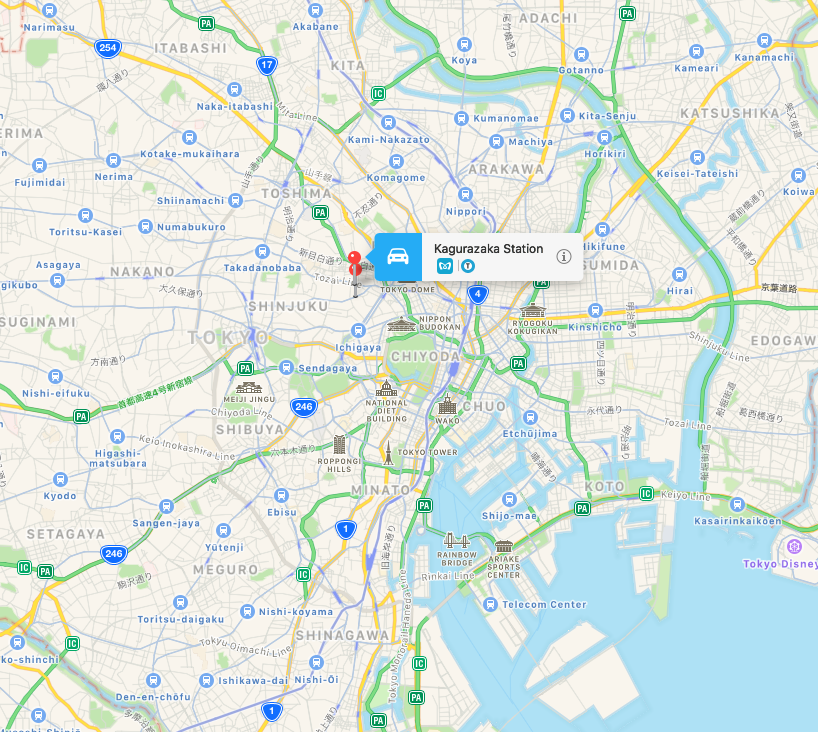 Kagurazaka district, Tokyo. As central as you can be. This is in Shinjuku-ku, 48,000/sqmi. 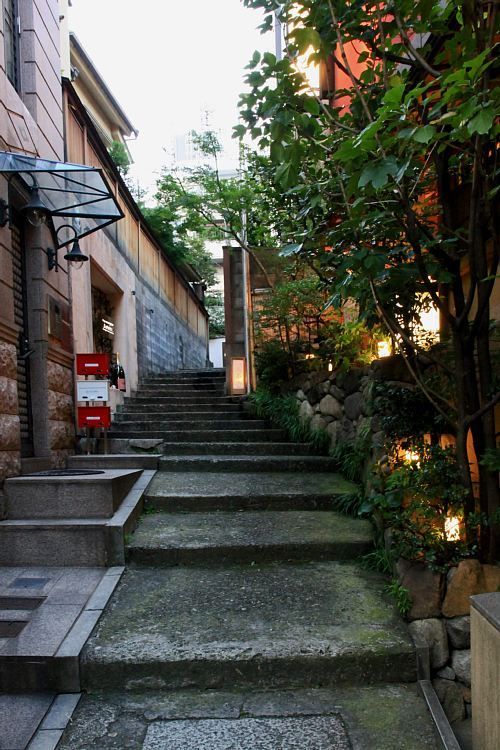 Street in the Kagurazaka district, Tokyo. 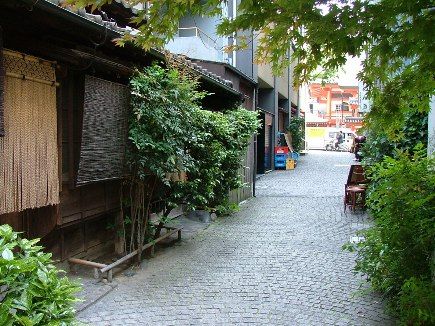 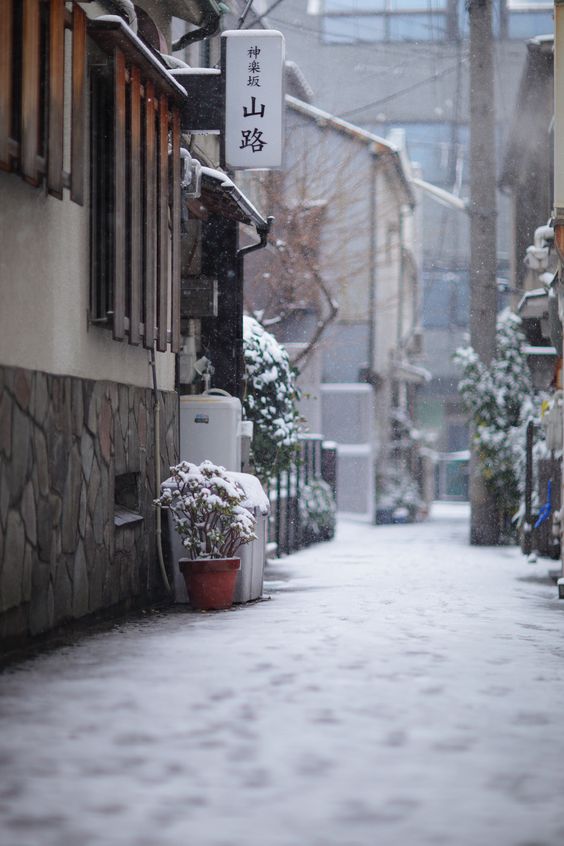 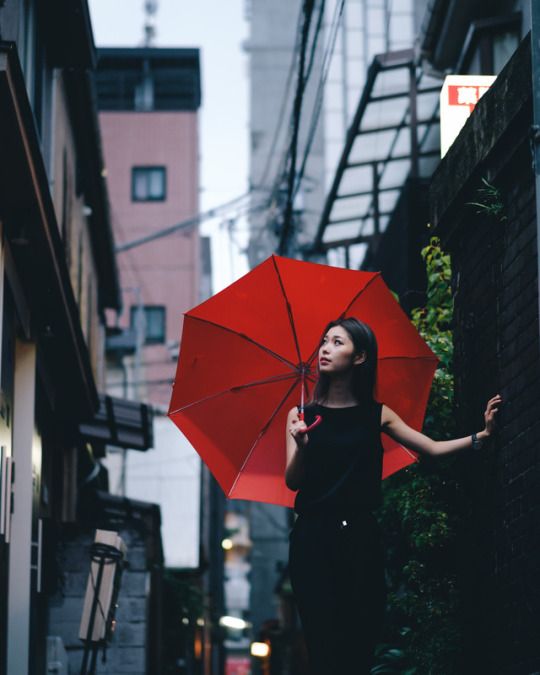 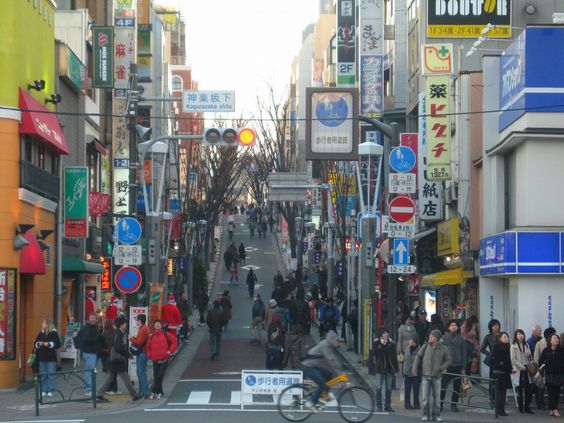 Kagurazaka district. A bigger street here, and even Arterial in form, but still no cars.

Mass-transit systems improve as population density goes up. More riders mean more trains and buses; and a shorter wait between each train or bus. The same track and the same station generate more revenue, keeping prices low without subsidy. Higher density means there is more within walking distance of the train station or bus stop. Eventually, higher demand leads to more capacity – the addition of new train or subway lines. This increases the number of places easily accessible on the system, and reduces the distance between the train station and people’s houses. The bigger the train network gets, the better it gets – the more places you can access using the train alone. High-speed intercity trunk lines are added. Clumsy buses evolve into BRT systems with dedicated lanes, or are replaced by streetcars and subways. Cyclists become numerous enough to get their own segregated bike lanes. The more, the merrier.

Successful urban development patterns get better and better as you add more people.

Thus we have a natural barrier, between the densities at which the automobile-dependent suburban pattern chokes on its own internal contradictions, and the densities at which walkable neighborhoods connected by highly-developed transit systems flourish. Plus, we need a transit alternative itself.In general, whole cities are not razed and rebuilt from scratch. The process is gradual. Thus, we should concentrate on the best 5% first. The most obvious candidates for densification and migration to a walking/transit form rather than auto dependency, are areas around existing train networks, or, lacking that, areas around an existing Grand-Boulevard-sized thoroughfare that can serve as a backbone for bus, BRT and streetcar systems, and dedicated bicycle lanes. A plan similar to this is being implemented on King Street in Toronto.It is perhaps a bit counterintuitive at first that walking-centric neighborhoods be clustered around a traffic-filled Grand Boulevard. However, the noise of automobile traffic falls off quickly once one leaves the boulevard itself. These side streets can be quiet, human-centric places; perhaps in the Narrow Streets for People format. Everything within about a fifteen-minute walk of the Grand Boulevard (about 1200 meters) can use this transportation corridor, in lieu of automobile dependency. This area, up to 1200 meters (that is a lot, actually) on either side of the Grand Boulevard, can be zoned for high-density, multi-use buildings up to six stories high. 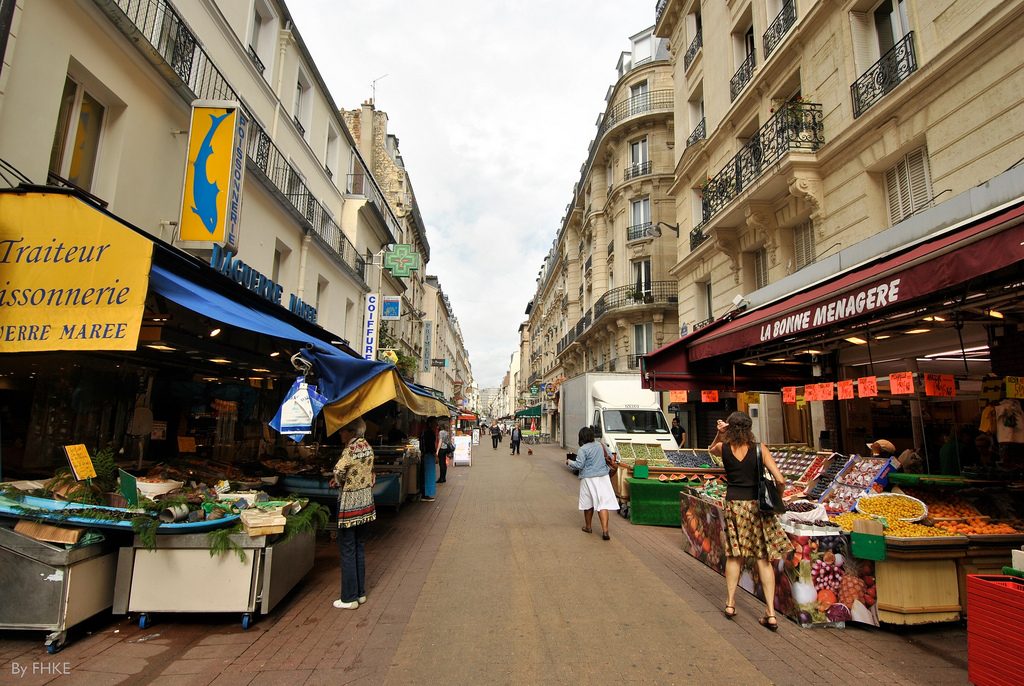 Paris, France. Five or six stories, and a Narrow Street for People. Around 60,000/sqmi and not too crowded. 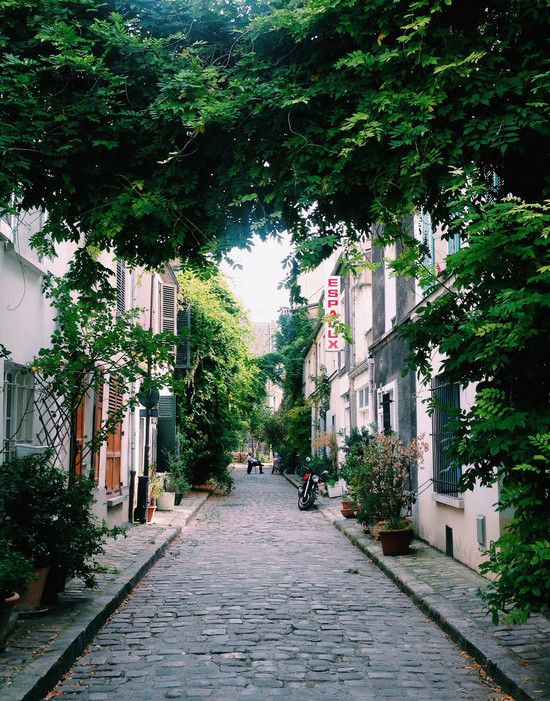 Processed with VSCOcam with c1 preset 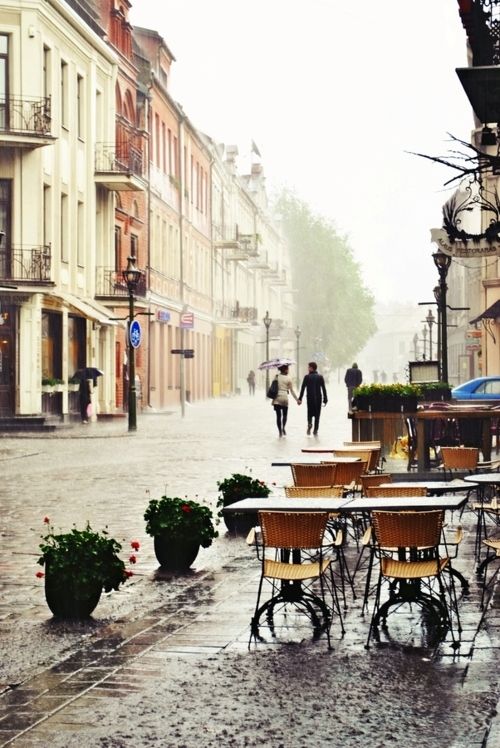 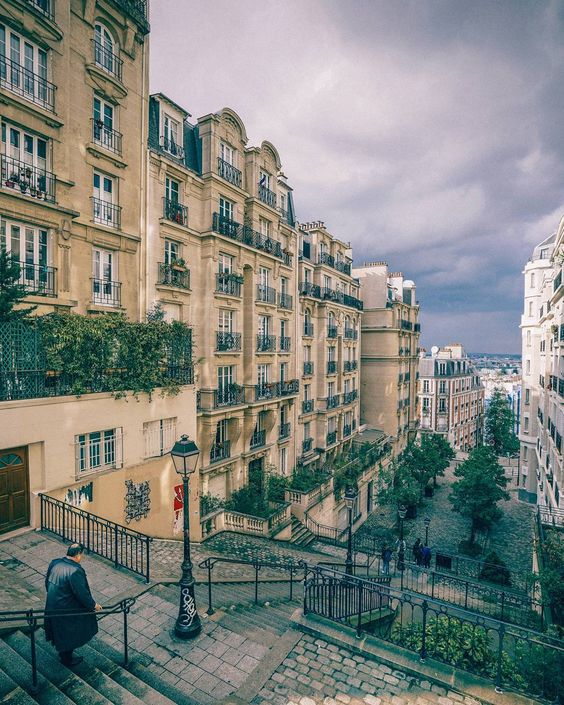 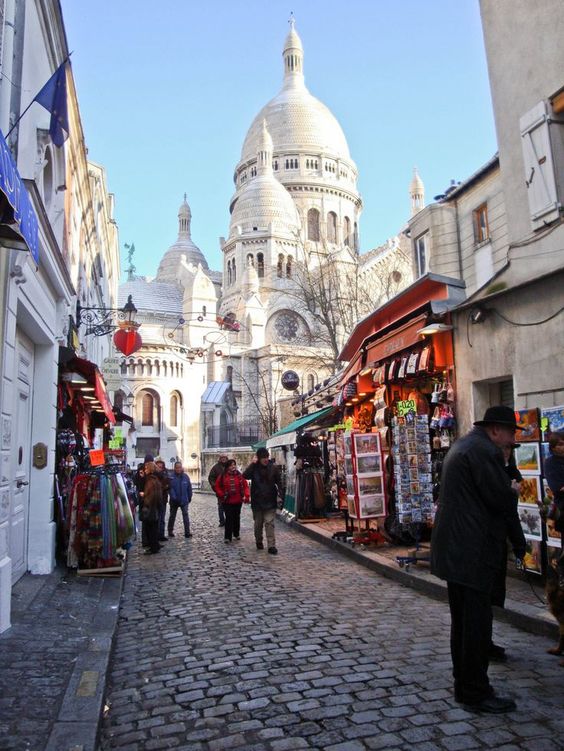 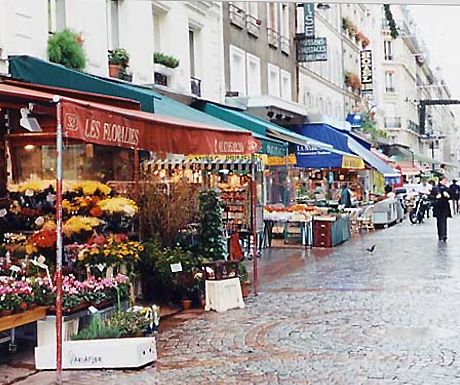 The Grand Boulevard itself can be zoned for taller buildings. Midrise buildings, of perhaps 7-20 stories, due to their scale, tend to go well with Grand-Boulevard streets, and can even provide a sort of barrier to the road noise of the Boulevard, thus leading to more serene neighborhoods behind. This is a common solution in Tokyo. 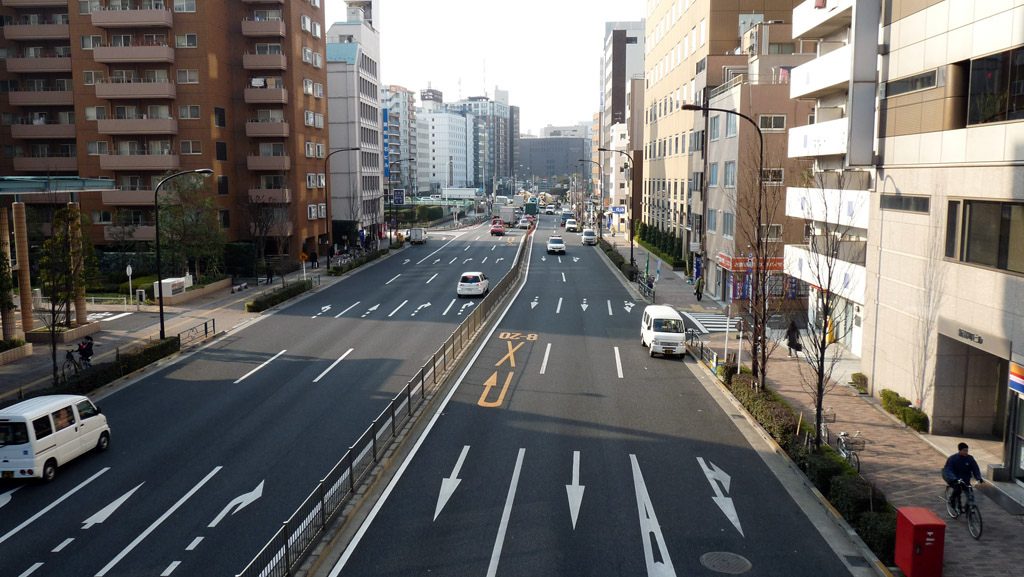 Grand Boulevard-size street in Tokyo.
This is where you can implement all your “complete streets” ambitions, including dedicated bike lanes, BRT lanes, bus-stop pullouts, etc. 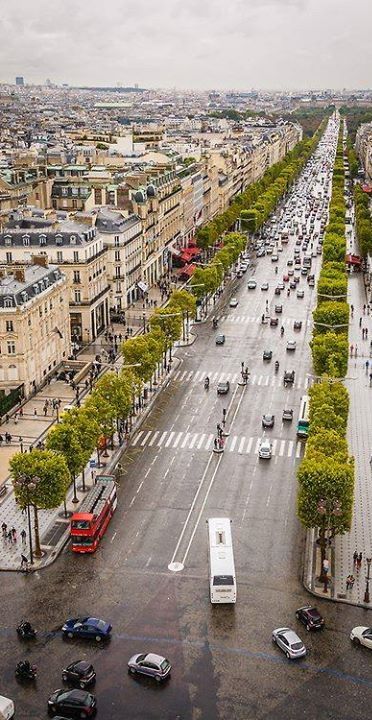 This densification around the Grand Boulevard does not much affect those neighborhoods that are outside of the 1200-meter walkability corridor. There is not much reason for people to drive their cars (which they might not even own) in those distant suburban areas. Ideally, people living in the densified corridor would find that they don’t really need a car at all for their daily tasks, and might use one primarily on weekends.Within this densified corridor, I would recommend the elimination of onstreet parking. Onstreet parking is basically a subsidized resource offered for free by the government. It is a free alternative to privately-owned offstreet parking. Like any valuable resource offered for free, demand quickly outstrips supply; shortages ensue; the perception of a public “entitlement” generates demands for more supply; and political battles arise over access to those resources. It would be the same if the city government handed out free chocolate bars.The free market is perfectly capable of producing as much offstreet parking as the market demands, at a price that reflects the value of the resources used to provide the service. If the value of land is high, it might make more sense to provide housing for people rather than housing for cars. This is reflected in the high cost of market-rate parking. The result is that more housing is built; fewer people own cars; more people use transit; more transit is made available to meet the demand; the transit system gets better; the advantages of car ownership dwindle and the disadvantages increase.Thus, within our densified corridor, all onstreet parking should be replaced with fee-based, privately-owned, market-rate offstreet parking. A variant would be to charge fees for onstreet parking, sufficient to reduce demand to less than available supply – in other words, comparable to market-rate private alternatives. If it costs $100 per month for an onstreet parking sticker, parking problems might quickly disappear. If not, raise the price until they do.Also, by eliminating onstreet parking, quite a lot of space is opened up that can be used for all manner of higher-value uses, such as dedicated bus and bike lanes, trees, or expanded sidewalks. Also, it potentially provides more space for stopping or standing for deliveries, typically for less than twenty minutes although sometimes for a few hours.Perhaps here we should address the potential complaints of those suburbanites living in the densified corridor. Will traffic and parking problems increase for them? Providing transit alternatives, and eliminating onstreet parking, tends to mitigate both problems. These legacy suburbanites enjoy a different advantage. As the area is now zoned for higher density, land values might rise substantially, perhaps even to multiples of their prior levels. Any unhappy suburbanites are welcome to sell out to an apartment developer at enormous profit, take their gains, and purchase a house in another neighborhood that suits their preferences. Or, they could take their gains, put most of it in investments, and use a small portion to purchase a condo in the same neighborhood. It is a winning outcome either way.It is counterintuitive perhaps that land values can rise as housing prices fall. When a piece of land is used for the homes of ten families instead of one, the land price can double while the land-cost-per-home falls by a factor of five. Everybody wins.Once this beneficial model has been proven, more suburban areas might volunteer to follow the same pattern. These people also want to enjoy some of the profits, and might be interested in living in the exciting, walking/transit-based neighborhoods that result.