Interpreting Gold and Currencies in an Environment of Official Intervention
April 11, 2010

For a few years now I’ve been thinking about what a certain gold:currency ratio might mean when that ratio is heavily influenced by official intervention.

Official intervention in the gold market has been a fact of life for most of the past fifty years or so. You can look up the history of the London Gold Pool yourself, starting with Wikipedia. It has become particularly intense recently.

Our base thesis is that the currency:gold ratio reflects the value of the currency, while gold remains essentially inert, or stable in value. But does this hold when a lot of “gold” is “paper gold,” when the paper gold markets are being manipulated daily, and when government occasionally dump metal on the physical market too?

I think I’ll just jump right to my conclusions: it doesn’t really matter. You can take the currency:gold ratio as indicative of currency values, and corresponding economic consequences, even if it is highly manipulated.

Let’s forget about the currency:gold ratio for a moment, and just think of one currency against another. Let’s say the yen is trading for 100/dollar, and there is official intervention to weaken the yen (or support the dollar). The yen then trades for 125/dollar.

Even though we got to the 125/dollar rate by artificial means, nevertheless, we treat that as the “real” rate. It will have real economic effects, for example the profitability of exporters. Because that rate was arrived at artificially, it is possible that it might soon revert back to the 100/dollar rate. However, for the time being, it is 125/dollar, and it doesn’t really matter how it got there.

We can see also, I think, that the Japanese (or U.S.) economy will reflect that 125/dollar rate, for as long as it lasts. It is “real”. The economy doesn’t perform “as if” the rate remained at 100/dollar.

This leads into another theme that I’ve been talking about for a long time. Currencies affect economic conditions via their value. This is the cause-and-effect mechanism. If a currency is at 100/dollar, and is later at 125/dollar (for whatever reason), that change in value will have consequences.

This is actually a bit different than what most people assume, which is much more quantitative in nature. For example, you could argue (maybe) that if base money were doubled, then that would cause certain inflationary effects, no matter what the value of the currency is. So, even if the currency remained at $850/ounce of gold or 125/dollar or whatever, you would have inflationary effects despite the apparently stable currency value.

While I don’t dismiss this line of thinking entirely, I find rather that you don’t have much in the way of effects until the currency’s value changes. It is quite possible that a doubling of base money could lead to a decline in currency value from (for example) $400/oz. to $800/oz. Actually, you could have all kinds of outcomes, even a decline to $5000/oz. or what have you. However, most of the effects of this doubling of base money aren’t seen until the currency changes value.

U.S. base money has been rising at a rather brisk clip recently in the U.S. This is in part because of the desire for banks to hold larger reserve accounts with the Fed, which is not in itself inflationary. However, there has been a bit more to it than that. It would be reasonable to expect that this increase in base money will have inflationary consequences. 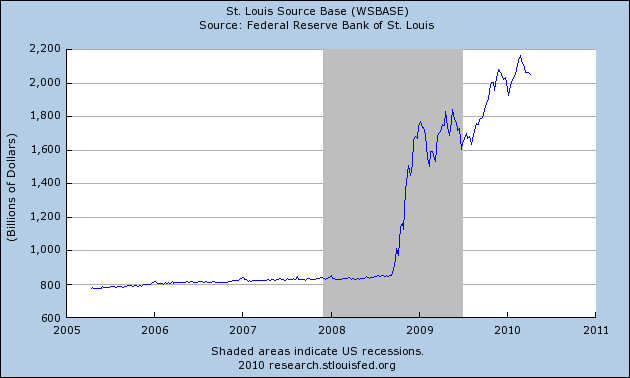 At the same time, we have seen rather aggressive attempts by the Fed and its helpers like JP Morgan to keep a lid on the dollar/gold price. What has been the result?

I would say that, on balance, the economic conditions reflect a dollar/gold ratio of $1150/oz., with the assumption that gold’s value remains essentially unchanged.

For example, let’s hypothesize that this increase in the monetary base is actually much more inflationary than is reflected by the dollar/gold price, which hasn’t really changed that much considering that it hit $1030 in March 2008, over two years ago. In other words, although the manipulated dollar/gold ratio is at $1150/oz., economic conditions reflect a $2000/oz. ratio, or an additional 50% decline in dollar value since March 2008.

How does this hypothesis stack up? We haven’t seen any moves in other commodities markets that reflect such a decline in dollar value. 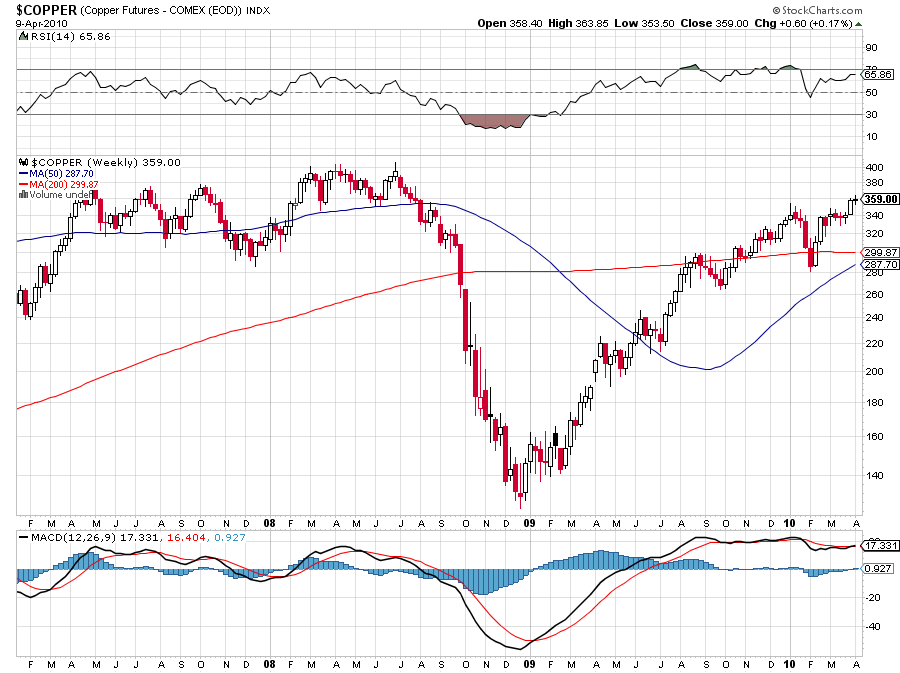 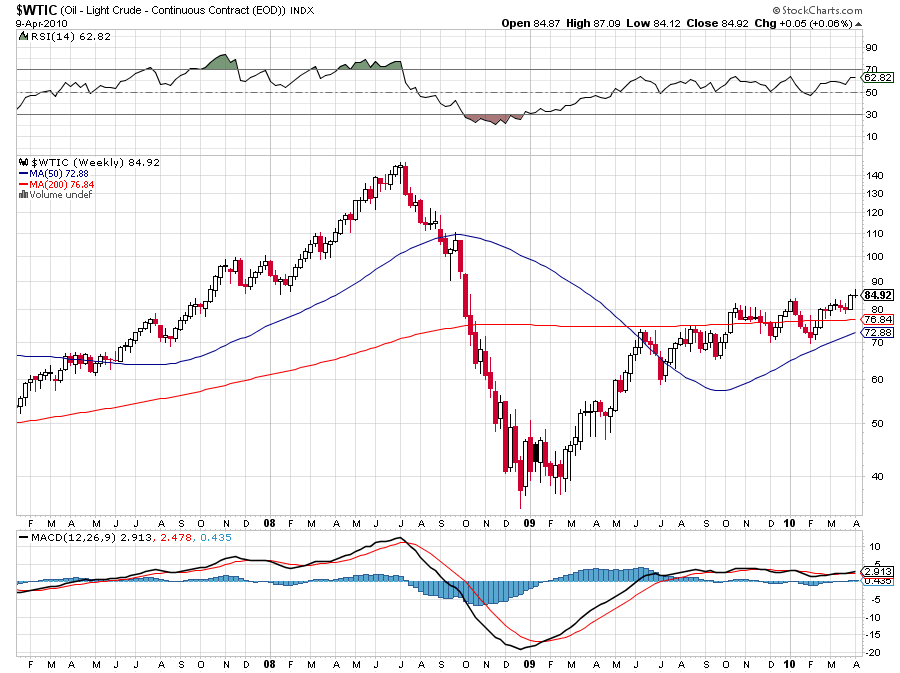 Crude oil is well off its highs. The dollar hasn’t fallen 50% against oil (i.e. doubling of the oil price). 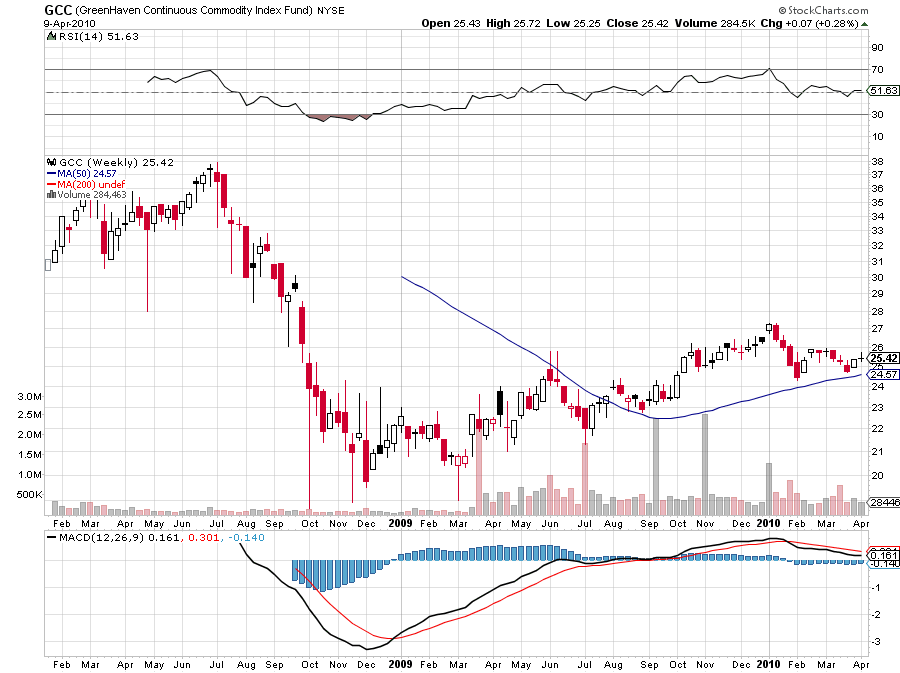 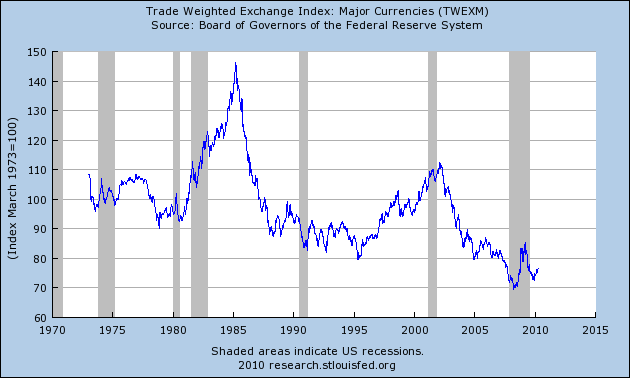 The dollar hasn’t fallen against other currencies. 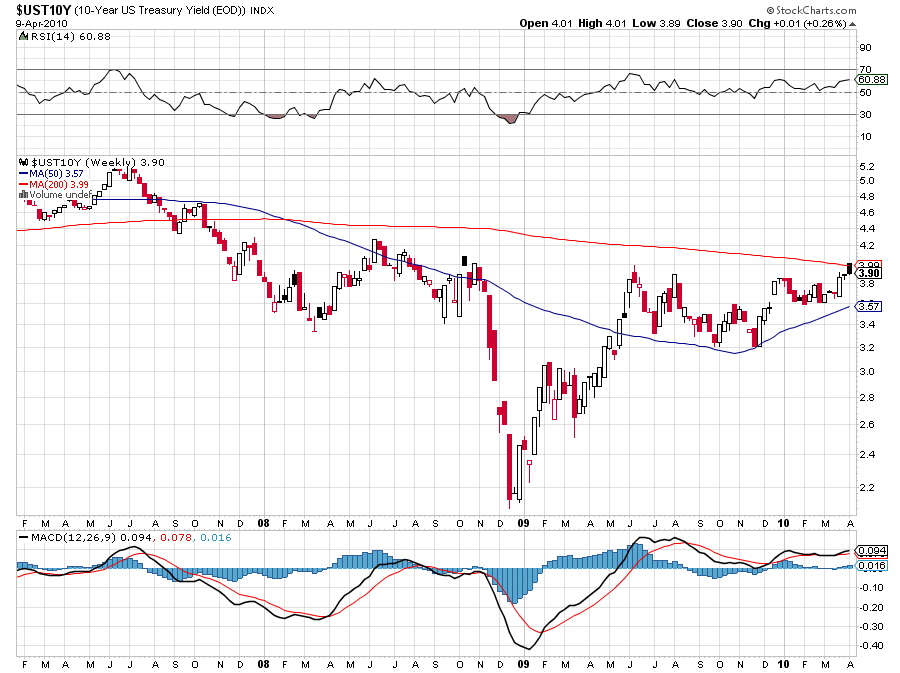 No big panic in the bond market either. 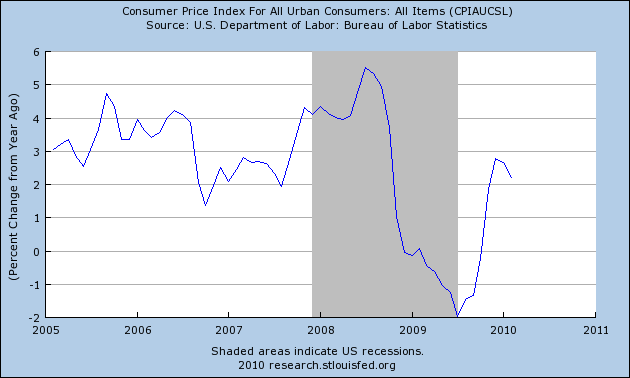 Not much evidence in consumer prices — even taking into account government manipulation here too.

In short, there isn’t much evidence that things have become dramatically more inflationary in the U.S. since the beginning of 2008 or so.

Let’s consider another hypothesis. Does official intervention depress the real value of gold?

Considering the dumping of physical metal on the market — even the tungsten fakes — we might expect the real value of gold to be depressed, even temporarily.

What would this mean? It would mean that at $1150/oz. — for example — the dollar’s value is actually less than it appears, but gold’s value is less too (depressed by intervention), so the ratio between them hasn’t changed much.

This is actually a variation of the argument we just went through above. If gold’s value is depressed, then we would expect to see gold decline in value against things like copper and oil and other commodities. But, actually, gold’s value in relation to those commodities has risen. Gold is making new all-time highs, while copper and oil are still below their highs. Also, we would expect to see more inflationary evidence than is expressed by the dollar:gold ratio, because the dollar’s real value would have fallen more than it appears. But, on balance, I’d say we actually have less inflationary evidence than one might expect at a dollar:gold ratio of $1150/oz.

Thus, I don’t see much evidence that official intervention has been able to depress gold’s real value. Without any evidence to the contrary, it is best just to accept our original premise, that gold’s value is stable.

Some analysts have concluded that as many as 10,000 tons of tungsten counterfeits have been dumped on the gold market. That sure sounds like a lot. It amounts to 322 million ounces, or 806,000 400oz. bars. Certainly that must have an effect on gold’s value, if these were treated as pure gold!

Rob Kirby: The Genesis of the Gold-Tungsten: The Rest of the Story

Maybe it did. However, there are about 4.5 billion ounces of gold in the world. So, even 322 million ounces only represents an increase of 7.1%, spread over many years. Does this mean that gold’s value was depressed by 7.1%? Maybe. The fact of the matter is, a 7.1% change over a decade just isn’t perceptible. It appears that this bogus supply is “disappearing” (being discovered) as it is, so we should expect any aberration in gold’s value to be corrected over time in any case.

People talk about gold being a “small market.” There is nothing small about it. At a value of $1150/oz., 4.6 billion ounces has a “market cap” of $5.3 trillion dollars. It’s tough to budge a market like that, even with 322 million ounces of phony gold. That’s why gold is so stable in value.

It appears that when there is intervention to change the dollar:gold ratio, or “depress gold,” what really ends up happening is that the dollar’s value is increased, while gold’s value stays about the same.

When there is aggressive intervention to depress gold, we find that the dollar’s foreign exchange value tends to rise! 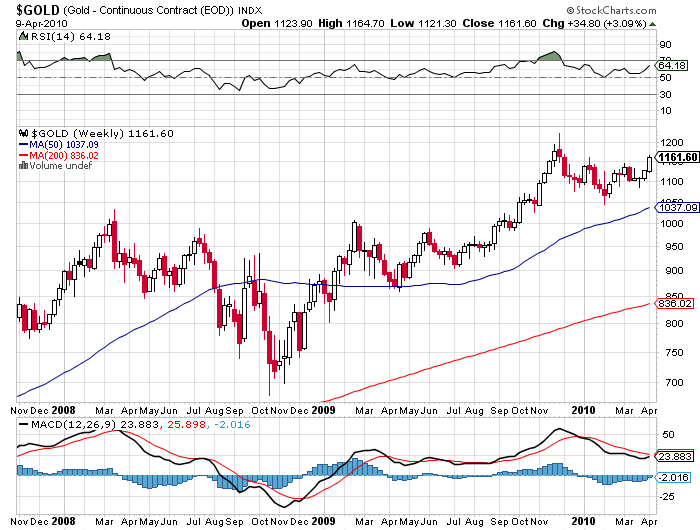 The period July 2008-November 2008 represented a time of aggressive intervention, in my estimation. Certainly the “falling price of gold” wasn’t reflected in premiums paid for real bullion products, which exploded to immense levels. All the evidence showed that the demand was up while the price was down. Eh?

But was gold’s value really affected? 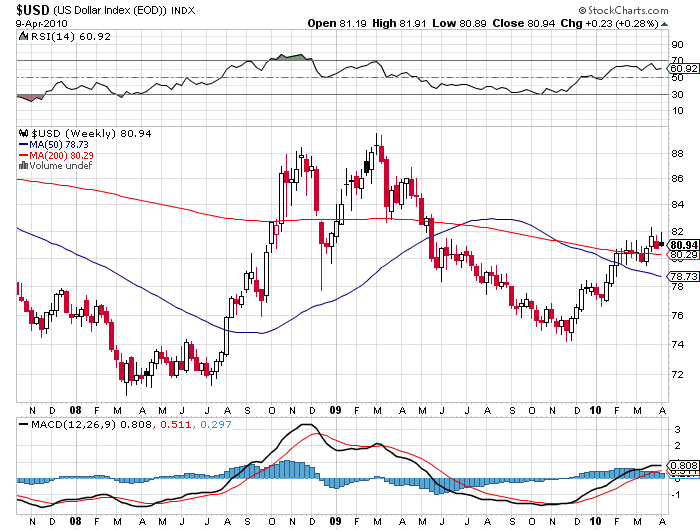 It appears that the effect of trying to “depress gold” was that the U.S. dollar’s value changed, while gold’s value remained essentially stable.

When I say “essentially stable,” I mean that it is stable enough that you can treat it as being completely stable.

The fact of the matter is, you can’t really measure the absolute value of gold, because you would need something to measure against that is even more stable in value than gold. If there was such a thing, we would just use that and stop talking about gold all the time.

I think it is a bit much to expect gold to be stable in value with some sort of mathematical precision. I assume that its value might vary by as much as +-10%, with a tendency to correct and equilibrate toward the midpoint.

Thus, here are my conclusions:

Even with heavy intervention, gold’s value remains essentially unchanged. The effect of intervention is primarily to change the value of fiat currencies.

In terms of economic effect, the value of the currency, as expressed by its ratio with gold, is the most important indicator, even if this ratio is arrived at by artificial means.

On balance, the effect of intervention has been that the dollar’s decline since 2001 has been moderated in its pace.

However, actions still have consequences. The London Gold Pool maintained the $35/oz. price during the late 1960s even though Fed policy had an inflationary bias. This went on for a while … until it couldn’t be sustained. Then the dollar fell apart, during the 1970s.

Today, the Fed’s inflationary bias has been reflected in the rising gold price/falling dollar since 2001. Just as in the 1960s and 1970s, actions have consequences, even if they can be delayed for a while by the government’s heavy hand.

In short, don’t worry about it. Just look at the currency:gold ratio.