There’s a general behavior that humans use when they are dealing with unfamiliar information. Once is a fluke. Twice is a coincidence. Three times is a pattern or trend.

I want to make everyone understand the pattern, so we’re going to take a quick look at a third example of a gold standard in operation, in real life. In this case, it is Italy in the years 1861-1914. 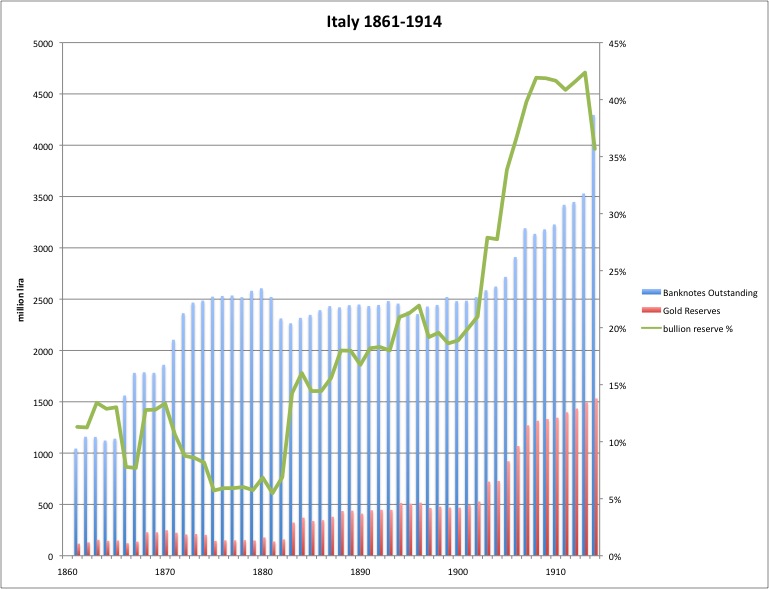 Once again we see that the pattern of banknote (base money) issuance does not follow the curve of mining supply, nor does it follow the pattern we saw in either Britain or the U.S. For whatever reason, the demand for lira banknotes was different than the demand for U.S. dollar or British pound banknotes, and, to maintain the lira at its fixed gold parity, the supply of lira had to match the demand. This is a little like today’s gold ETFs. Why is one ETF more popular (“more demand”) and thus issues more shares (“banknotes oustanding”), while another is less popular and thus issues fewer shares? Who knows. Who cares. The important thing is that all of today’s ETFs are linked to gold, just like the U.S. dollar, British pound and Italian lira used to be.

We see also that Italy did not have “100% reserves,” in fact reserves sank as low as 7% of banknotes outstanding for a while in the 1870s. Then they went up to 42% just before World War I. It didn’t matter to the value of the lira, which was pegged to gold throughout this time.