(This item originally appeared in Forbes.com on December 19, 2014.)

That is: the central bank is “intervening” in markets to support the value of the currency, either by selling foreign currency, or, as was the case for the last days of the U.S. gold standard era in 1970, by selling gold bullion. Perhaps interest rate targets are also raised. However, the monetary base is not contracting as it should, but is stable or even expanding.

I’ve been documenting that this was not happening in the case of Russia, just as it didn’t happen in 2008, until the Russian central bank changed course in early 2009. I described this episode, and several other similar ones, in my 2013 book Gold: the Monetary Polaris, which you can download in free eBook format here. 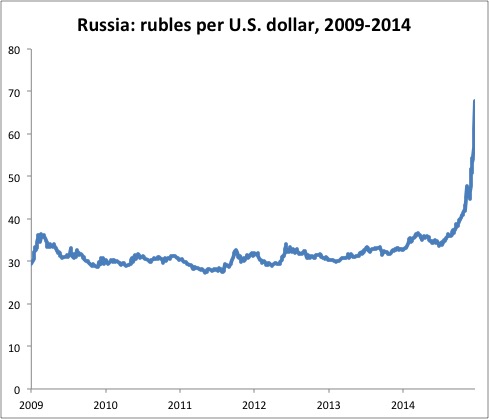 The ruble had been stable around 30/dollar for some time. In early 2013, the value began to slip a bit, and interventions began in modest size. However, despite this, the monetary base continued to grow. The supply of rubles was getting larger, even as the sagging value indicated that the supply was already more than sufficient. 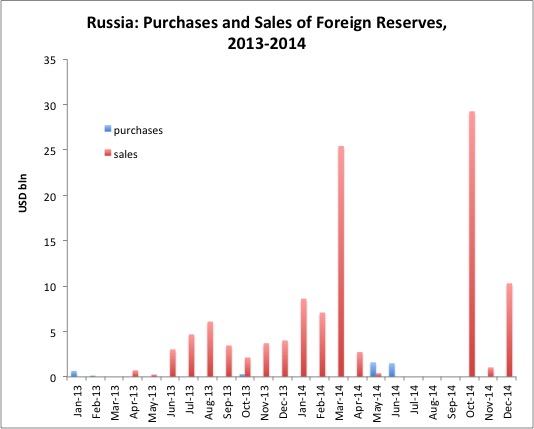 In March 2014, there were some large interventions. Then, the central bank was inactive until more large-scale interventions in October. (Figures for December 2014 are month-to-date to 17-Dec.) However, these sales of foreign reserves were again not matched by equivalent contractions of the ruble monetary base. The ruble monetary base continued to rise, at roughly a 6%-7% rate compared to the same month a year previous. (There’s a bit of yearend seasonality.) 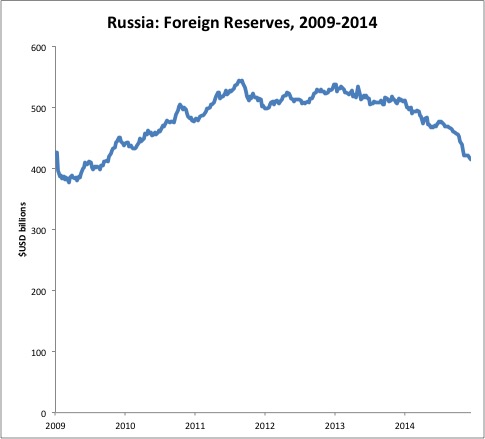 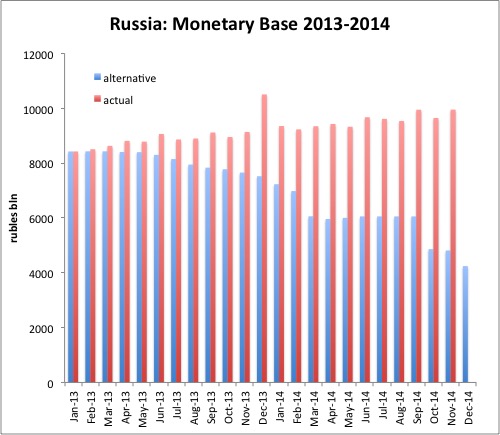 In other words, the monetary base would have contracted by 57%. That is a lot! In practice, such a large contraction would not likely be necessary. A contraction of about 10%-20% over the course of a month, with the promise to do more if necessary, is enough. (The Central Bank of Russia records its “broad definition” monetary base at the first day of the month. I find this confusing, so I relabeled it as the last day of the preceding month.)

Such a contraction does not have negative economic effects, because the central bank would be absorbing what amounts to “excess” rubles. Or, to put it another way, it would be supporting the ruble’s value – a good thing – not forcing it dramatically higher, to 20/dollar for example, which could have some negative economic consequences.

In the short term, there could be a rise in overnight interbank lending rates. This is a natural market effect caused by a reduction in the quantity of bank reserves, not an interest rate policy target. In practice, these increases in short-term rates tend to be quite short-lived, and often overnight rates return to low levels within only a few days. The broader economy suffers no ill effects.

I know what you are thinking. You are thinking: “Ummm, this seems rather obvious and simple. I can understand it from this brief description. Are you telling me that the people managing currencies today, who are supposed to have years of experience in these matters, and are supposedly at the top of their field, don’t understand this? And are you telling me that enormous disasters – including the Asian Crisis of 1997-98, and even the end of the world gold standard system in 1971 – happen as a result? And that, for some reason, people haven’t figured this out properly yet?”

Yes, that’s about right. That’s why we make them sit in the corner and wear a tall pointy hat.

“Are you then suggesting that, by reading this one-page op-ed at Forbes.com, I might now know more about this than the people heading the world’s central banks? And that this knowledge could be used to make the world a place with a lot fewer monetary disasters?”

I can almost see the light bulb light up over your head.

What then happens, for 97 out of 100 people, is that the idea makes them so uncomfortable – it just can’t be so – that they put it out of their mind.

The remaining 3 out of 100 are the ones who have the potential to build the great monetary systems of the future.