For some reason, I’ve been spending a lot of time recently talking about the “interwar” period, 1920-1940.

During World War I, Japan, following the example of most all governments in the world, suspended redeemability and floated the yen in 1914. It looks like the yen was nevertheless kept essentially linked to the dollar, however. The dollar, like the pound, was also effectively floated, and sank in value. 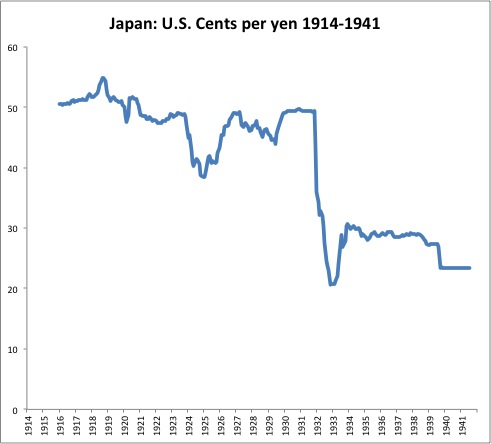 The yen takes something of a dive in 1923, related to the Great Kanto (Tokyo) Earthquake of September 1, 1923.

Wikipedia on the Great Kanto Earthquake

This is remedied soon after, with the yen really just returning back to near its prewar dollar (and gold) parity. However, the yen continued to float, and sank in value somewhat around 1927, probably related to a financial crisis at that time.

Eventually, the government decided to formally return to a gold standard system, and did so in January 1930. This shows up as the straight line period.

The yen was devalued in December 1931, soon after the British pound was devalued, and remained a floating currency afterwards although it remained in a rough trading band. The yen then rises vs. the U.S. dollar, but that was because the dollar was in turn being devalued, from $20.67/oz. of gold to $35/oz. during that year.

Here’s what the yen’s value looked like vs. gold. This assumes a stable $20.67/oz. dollar value during WWI, which, as described, was not actually the case. It is fairly accurate from 1923 onwards. 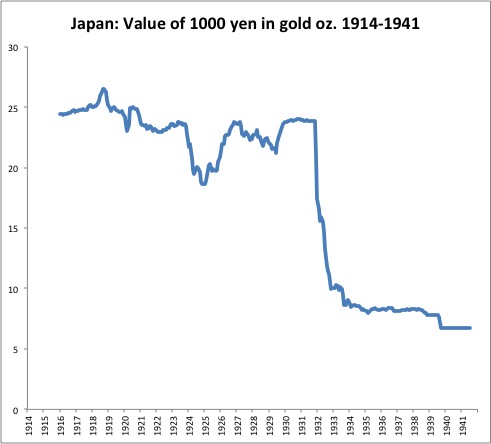 As we see, the big devaluation was in 1931. Afterwards, the yen had a pretty stable value vs. gold, although it remained a floating currency without a formal gold parity.

Rather too much is made of the return to a formal gold parity in 1930. This did involve a slight increase in the yen’s value, back to (presumably) a prewar parity, but it was pretty small. The ten-year average value of the yen at the beginning of 1930 was 22.4725 oz. of gold per 1000 yen. The 1930 parity value was about 23.90 oz. per 1000 yen. In other words, the new gold parity was only 6.3% higher than the ten-year average. This was not really a big deal, and was not responsible for any major disasters. The Keynesians like to make a big huff about it, but they always do that.