Let’s Kick Around Pretty Much Everybody

Recently there has been a debate between the “Keynesians” and the “Austrians.” This has become particularly acute due to the disappointment of “stimulus” spending in the U.S. and pretty much around the world over the past 18 months, combined with the threat/promise of QE2 in just a few weeks. I would say that almost all economists, economic thinkers, and general economic spectators tend to fall into either the “Keynesian” camp or the “Austrian” camp. They sometimes try to give themselves new labels, because calling yourself a “Keynesian” these days is sort of like saying you are in favor of the New Deal. Not quite fashionable enough for an academic trying to build a career. Sometimes the Keynesians even try to call themselves “neo-classical” economists, just to make things more confusing. The Austrians, on the other hand, tend to go for antique terminology, and many today beat the table about “fractional reserve banking,” which is an ancient term for what we call “banking,” that is: borrowing from depositors and making loans. Being against “fractional reserve banking” is equivalent to saying: “bankers shouldn’t make loans,” but I think the Austrians don’t even understand that much.

Since most everyone is either a “Keynesian” or an “Austrian” these days, and both parties need a good kick in the ass, I figure we are delivering an all-purpose ass-kicking today.

We have so much work to do. Let’s get started!

The Keynesian solution for most every problem is more government spending, combined with some sort of “easy money” policy that basically amounts to currency devaluation. Good economic policy tends to be about Identifying the Problem, and then Fixing the Problem. I think this is a sensible way of doing things, don’t you?

Unfortunately, the Keynesian solution bypasses this process altogether. How many economic crises have been caused by not enough government spending? Or a currency that is too stable? Maybe none in all of history. So, since economic crises usually have some sort of identifiable cause, then if your only solution is government spending and currency devaluation, obviously this cause goes unaddressed. The problem is not fixed.

Keynesians like to dress up their currency devaluation strategies in all sorts of confusing terminology, mostly about “lowering interest rates.” However, in a crisis, interest rates often fall to very low levels anyway, from natural market forces. So, we don’t need any external mechanism to lower rates, they fall automatically.

The Keynesian “lowering interest rates” schemes can have an effect, but only if they also cause a fall in currency value. It’s the devaluation part of the scheme that delivers the results, not the lower interest rates.

How about that government spending? The last “stimulus package” didn’t work so hot, did it? What about those three million jobs the Obama administration promised, through their Keynesian “multiplier effect” calculation and so forth? Big fat failure! This is pretty much what always happens. Just ask the Japanese.

Let’s say the government hired ten million people to spit at the moon. Once a day, they would stand outside and spit at the moon. We would pay them a typical public servant salary for this, $50,000 a year plus $125,000 in benefits, for total compensation of $175,000. They would appear to be “employed.” GDP would register 10 million X $175,000 = $1.75 trillion of additional GDP in the form of moon-spitting services.

Keynesians like to point to WWII, in which the U.S. government accounted for 43% of GDP. Wow, lots of employment! Lots of production! Of course, some people might say that making tanks and bombs and then going overseas to kill people is even more worthless than spitting at the moon. Anyway, it was a special case. Since Europe does not need to be Saved From Evil today, it’s not really an option. The defict spending of WWII was not really sustainable either, as the debt/GDP ratio exploded from 40% to 120% during the war. How long could you keep that up?

The Austrian solution for most every problem is Do Nothing. Usually, they don’t use the term “do nothing.” That is not too fashionable these days. Rather they say things like the “liquidation of prior malinvestment.” In general, I agree with the Austrian notion that economies have a natural self-healing element. However, by blaming most everything on “prior malinvesment,” or some similar sort of idea (“bubble caused by credit creation”), the Austrians also typically fail to Identify the Problem, and thus fail to Fix the Problem. As the situation just gets worse and worse — the usual effects of Not Fixing the Problem — Austrians have a sort of glee as they figure every downturn represents more of the evil malinvestment being remedied. Often, it is just an economy collapsing due to an Unsolved Problem.

The classic example of this, of course, is the worldwide tariff war set off by the Smoot-Hawley tariff in the United States. The Smoot-Hawley Tariff by itself was not too bad, but it was matched by similar, retaliatory tariffs by governments worldwide. So, really there were a dozen or more “Smoot Hawleys” all over the globe. This was the main cause of the initial downturn in 1930. It was as obvious as you can get. Didn’t classical economists from Adam Smith, if not earlier, say that low tariffs are good and high tariffs are bad?

However, the Austrians, and similar conservative economists of the time, completely missed this one. Yes, they are aware of it, but for some reason it doesn’t fit into their “inflationary credit boom and bust” story so they just ignore it. The conservative economists of the time said “just let things go right ahead, it will all work out fine if we just do nothing.” They didn’t identify the problem, and certainly did nothing to fix the problem. (Many conservative economists were in fact tariff supporters, as high tariffs were a Republican thing from way back to the origins of the Party in 1860, with the Morrill Tariff.) Even after eighty years of hindsight, how many of today’s “Austrians” will just say: “Yes, the worldwide tariff war was a big problem. They should have just fixed it as soon as possible, once they had realized their error.” I’ve never seen one.

The “inflationary credit bubble” theory of the 1929 bust is mostly baloney — with one exception, that is: margin lending on stocks. In those days, it was common to have margin of 200%, 300%, or even 1000% on stocks. Margin liquidation was a big part of the severity of the initial 1929 selloff. However, the economy as a whole didn’t have all that much credit. Let’s take a look: 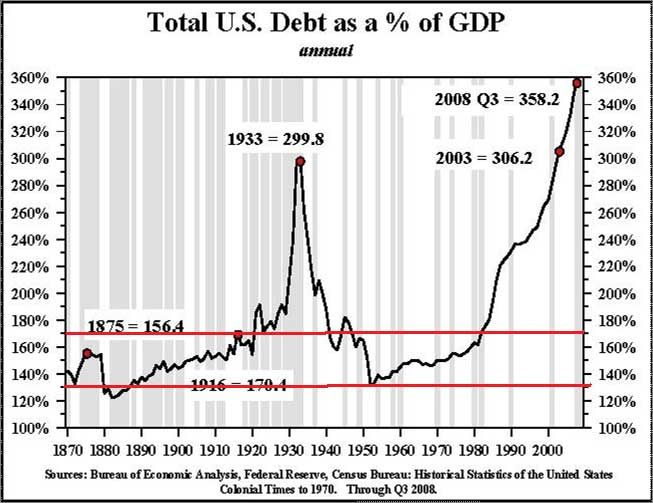 Yes, there’s a big spike in the total debt/GDP ratio, but it happens in 1933. Why? Because of an insane credit bubble in 1933? I think not. It was because nominal GDP, the denominator, shrank by about 40%. During the 1920-1930 period, the ratio was stable around 180%. This is the pattern of a healthy economy, much like that of the 1950s and 1960s, where the ratio is stable around 150%. There was no insane credit bubble bursting, but rather normal, healthy credit that went bust due to the horrible economy, beginning with the aforementioned worldwide tariff war although it soon got a lot worse than that.

In today’s case, we had some real malinvestment — the housing bubble, and associated credit bubbles — which in fact did have inflationary undertones, notably the very low interest rates (negative “real” rates) of 2001-2003, combined with declining dollar value as expressed by the “rising price of gold in dollars.” There isn’t really much to do about this except let it unwind. However, that doesn’t mean that we just have to sit around and watch the house burn down, either. Banking system meltdown and other “systemic” factors are a real risk. The proper banking solution would be a debt restructuring with government oversight, probably combined with what amounts to a Super Glass-Steagall, to once again separate regular banking from investment banking, securities trading, derivatives dealing, and everything else that is not simple commercial lending. I say Super Glass-Steagall because I think that we should also separate securities brokerage (executing customer orders) and prime brokerage (securities custodianship) from the market-making, derivatives dealing, HFT and proprietary trading, and investment banking of today’s broker-dealers. A three-way split.

Of course, a gold standard would help too. Low Taxes and Stable Money.

So you see, there are a lot of things to do besides just saying “I told you so” as the economy disintegrates.

Finally, let’s kick around the New Urbanists and the “sustainability” people, just because they deserve it.

That’s probably enough for one day. I’m sure some Keynesian or Austrian will say something stupid before too long, and we’ll kick them around some more.