A couple weeks ago, we took a trip to Julianne Moore’s house in Greenwich Village, a section of New York City in Manhattan.

The purpose was to get you used to the idea of living in a proper Traditional City urban house — the attached townhouse. In fact, this house is quite beautiful and has a luxurious big backyard.

It is on a land plot of about 2200 square feet, or 1/20th of an acre. This would be considered a very small plot indeed in Suburban Hell, but in the context of the Traditional City it is spacious, even extravagant.

This particular house is a good example of a Traditional City style urban design. However, Greenwich Village and New York City are not. They are examples of 19th Century Hypertrophism. So, I want you to think of the house, not the street and the city in general. Think of a house like Julianne Moore’s, but in a proper Traditional City environment like this: 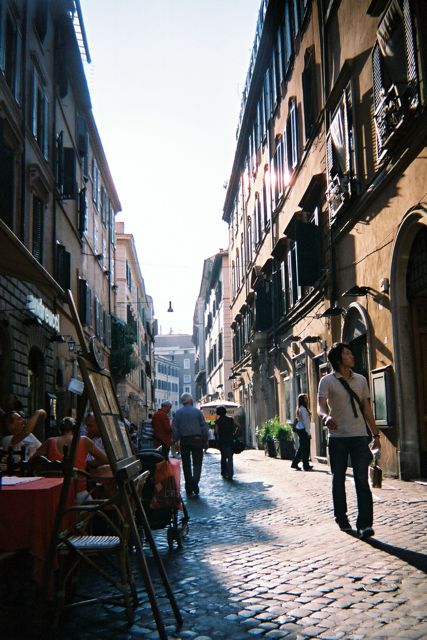 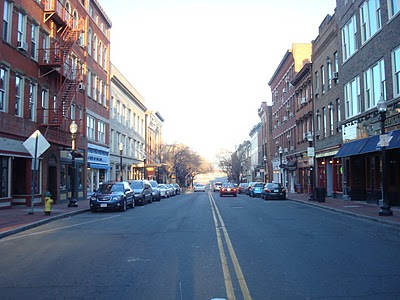 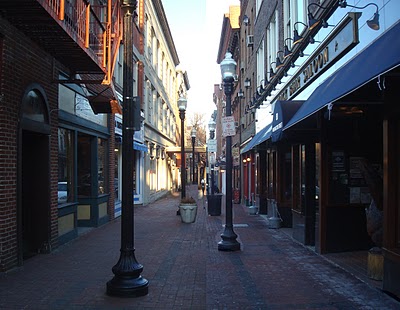 Doesn’t that look like a nice place. No Cars!

Actually, it is the same street, with the center automobile roadway digitally removed. We just got rid of four lanes of auto traffic. 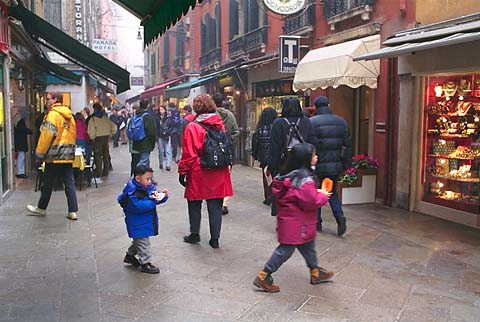 Typical commercial street in Venice, a city with no cars.
Looks about the same as our digitally-modified Norwalk street doesn’t it?

A Traditional City will have some larger “arterial” streets somewhat like Washington Street, with a central roadway, but that should be only a small fraction of overall streets. I think a ratio of about 80% Really Narrow Streets/17% Arterial Streets/3% Central Boulevards is good.

(A Central Boulevard would be something like Broadway in New York or the Champs Elysees in Paris.)

In that case, why not just use an example from France? Because people can’t relate. They say, “oh that is so quaint, and typical for a bunch of quiche-eating surrender monkeys.” I need to use examples of Americans living in these sorts of houses, and enjoying it. It helps us to cross the line from “oh, that’s a nice postcard shot from a European vacation,” to “hmmm, yes, that could be a viable solution for me.” (Remember I’m dealing with retards here.)

As it turns out, Greenwich Village also has the narrowest house in New York City. The land it stands on is nine and a half feet wide, and thirty-two feet deep. That is 304 square feet.

Now let’s just think about that for a moment. An acre has 43,560 square feet. So we are talking about 1/143th of an acre. It is only one-seventh the size of the land that Julianne Moore’s house is on.

A hundred-and-forty-third of an acre? Is that possible? Is it tolerable?

Of course, you can have a lot higher density than that with an apartment building. You can easily do 300+ apartments per acre, with a Traditional City design of 5-6 stories like you see in the photo above, and no high-rises. But for now we will talk about single-family houses.

OK, it is obviously not as luxe as Julianne Moore’s place. However, you have to admit it looks perfectly comfortable.

We could be picky and list some design flaws — notably, the vestigal setback and “front yard” in the form of three feet of concrete surrounded by an iron railing. Is this really necessary? If you only have 304 square feet to work with, do you really want to blow 10% of it on a concrete setback that serves no purpose? This is why I say “buildings side by side, and up against the street.” However, remember that this is a 19th Century Hypertrophic City, not a Traditional City, so it is facing a street that is actually about the same size as Washington Street in Norwalk, above. This creates a psychological need for a “buffer” between the living areas and the inhospitable outdoor environment, and a subconscious urge to hide behind an iron fence with spikes on top. Normally, this would also be combined with an enormous stairway, another architectural “buffer,” but here the size of the house makes that somewhat inpractical.

With those quibbles aside: Could you live there? Would it be OK?

As it turns out, this tiny house has had quite a list of famous occupants since its construction perhaps in the 1850s.

Let’s compare the lifestyle of someone living here with someone living in a much larger brownstone in the same neighborhood. Is it only 1/7th as good? No, it is practically identical. There’s really no hardship involved in living in a place like this, or an apartment of similar size.

Indeed, there is a lot less hardship in some ways. It’s a heck of a lot cheaper. And a lot less bother to decorate and maintain. 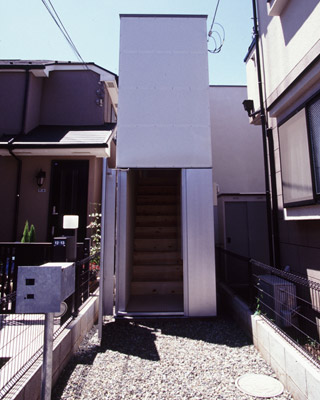 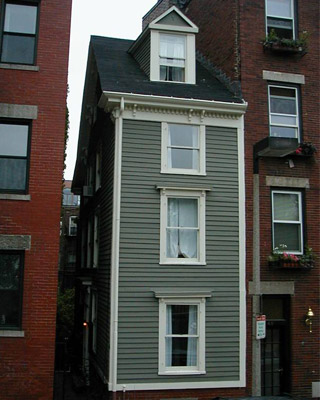 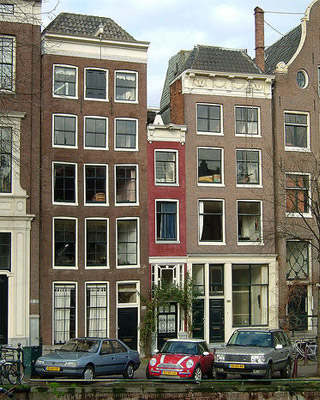 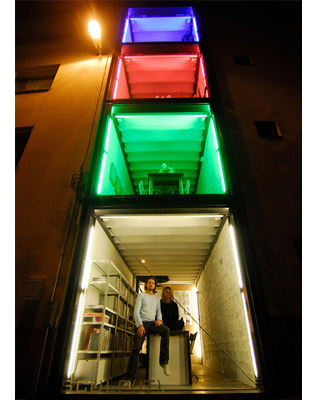 The most important thing, however, is not the house itself, but, as any real estate broker will tell you, the location location location. Ideally, a house like this would be located in a beautiful Traditional City neighborhood. John O’Brien is an artist who has done some wonderful paintings of Traditional City environments. Try to think of what it would be like to live in this house, in a John O’Brien painting. 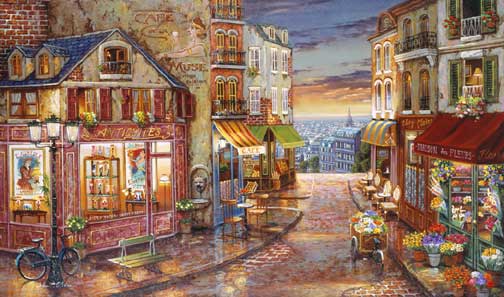 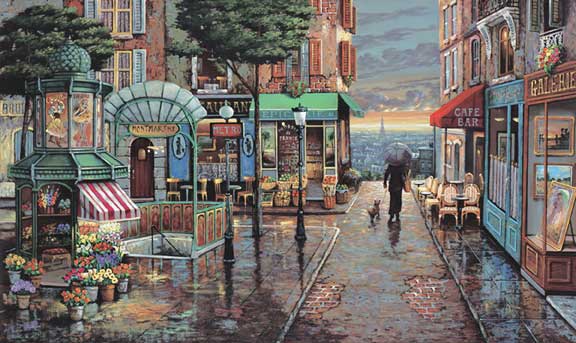 Look at the width of the street here. It is 10-15 feet. No cars. No green space. Just a guy and his dog walking down the middle of the street. 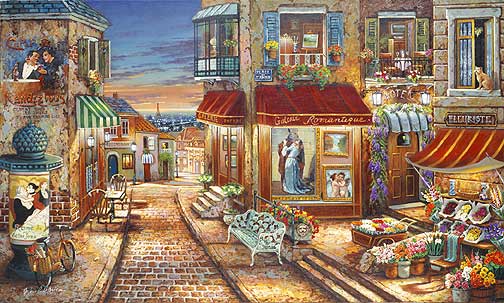 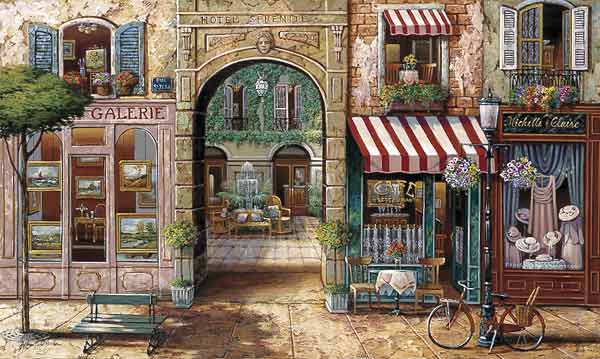 Look how every square inch is beautiful.
Nice example of an urban courtyard here too. 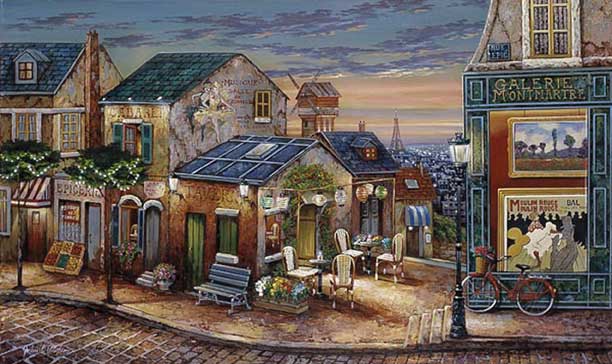 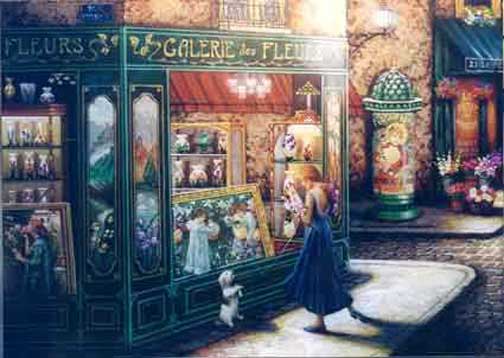 Girls in dresses.
November 22, 2009: What Comes After Heroic Materialism? 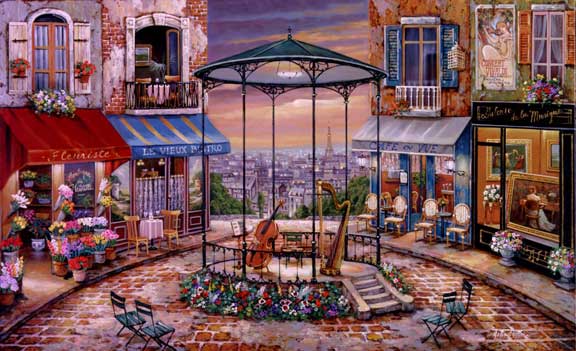 How about making something like this your urban ideal? It is so easy to do.

Really Narrow Streets.
Buildings side by side and up against the street.
No cars.

By the way, all these pictures are based on real parts of France, mostly Paris. 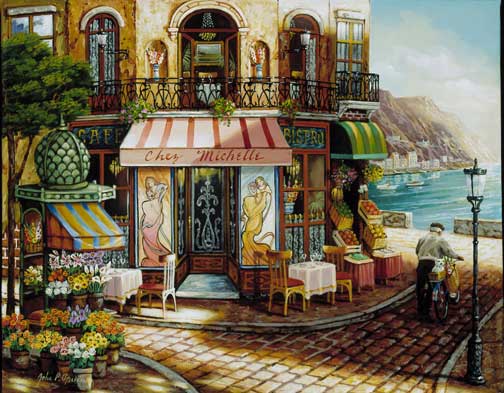 A city should be a place that children, women, and the elderly are comfortable in.

What if, say, San Diego looked like this?
Can you envision how fabulous it would be to have San Diego’s climate and beaches, combined with a city like this?
You could walk to the beach and go surfing in the morning and then have breakfast at Chez Michelle. How fabulous would that lifestyle be? 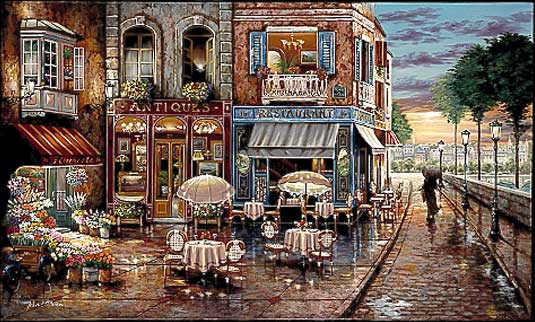 Not really griping about how small your house is anymore, are you?
Maybe you are starting to feel a bit of pity for those still wasting away in Suburban Hell. 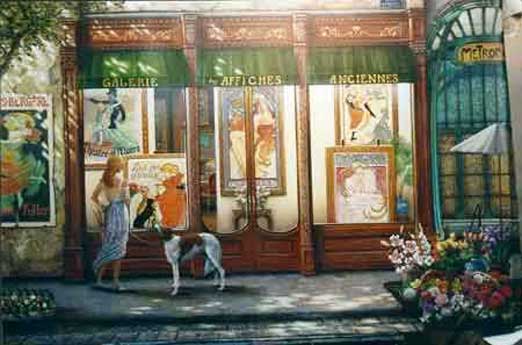 You should think of it in terms of lifestyle, not how-many-square-feet.

Can you begin to form a picture in your head of what a successful civilization looks like?
I hope you enjoyed our trip to the Skinniest House in New York.