I wanted to address some notions that you often see regarding banks and the banking system.

Do banks print money, and then lend it out? They did once, but not any more. Today, the only producers of money (technically, base money, which is the only thing actually used in monetary payment) are central banks. Today, “money,” produced by central banks, is very distinct from “credit,” which is the realm of commercial banks and also a great many other financial instruments, such as a junk-bond ETF or a mortgage-backed security. I admit this distinction is rather less clear in the case of a “free banking” system where there are many banks acting both as lenders and currency providers, and there is not a lot of difference between a deposit liability and a banknote liability on the balance sheet (as is the case for central banks today, where both are combined in “base money”). However, even then, the situation doesn’t really change much, so it is worthwhile to think of them separately.

How profitable are central banks? Their “profit” has two components: one is the interest income on their assets, mostly government bonds. The second portion is the amount by which these assets grow over time, purchased by base money created out of nothing. If you print $100,000 and buy a nice car, then you have made a “profit” of $100,000 represented by the car, although the car does not pay interest. 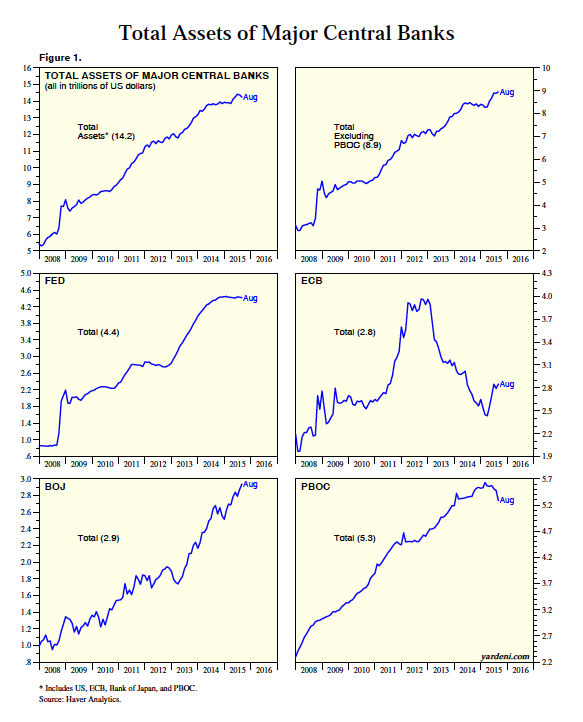 So, we see that total assets of major world central banks are about $14.2 trillion presently. If we assume an interest yield of 2% on this, it comes to $284 billion per year.

That’s a nice profit from the money-printing business.

Officially, these profits are paid to governments. However, many people suspect this is a bit of a ruse, and that certain influential European banking families, long connected with setting up these central banks around the world in the first place in the 19th and early 20th century, quite naturally enjoy the profits of the institutions they established with such great effort. G. Edward Griffin’s book The Creature From Jekyll Island is a nice account of this process in the founding of the Federal Reserve in the United States, which was actually the fourth attempt by the same European banking families, led by one in particular with a made-up name — let’s call them the Bluehelmets. The first was the Bank of North America, in 1781, followed by the First Bank of the United States in 1791 and the Second Bank of the United States in 1816. The National Bank System, dating from 1863, also looks like their handiwork.

In addition to this interest income, there is the increase in assets itself, obtained basically by printing money. Although the rise in assets since 2008 has been highly anomalous, nevertheless, there has been about a $9 trillion increase since then, which is also a pretty nice profit you have to admit. They can’t really “spend” this money (actually, they could but that’s a more complicated story, and besides they don’t really have to), but one effect of owning so many government bonds is likely that they have a lot of influence over governments themselves, as any debtor would over the indebted. They could probably also use these very large bondholdings in a great variety of ways to influence asset market prices, as collateral for derivatives positions for example.

Central banks don’t really indebt governments by printing money. The government bonds already exist, because the government wanted to borrow money. The ownership of the bonds simply changes, from some non-central-bank entity to the central bank. From the government’s perspective, it’s really much the same either way. Central banks could function without government bonds. They would simply own some other sort of asset, most likely a private-market debt asset such as mortgage-backed securities. If the government didn’t want debt, then it should just not borrow any money; the central bank would be much the same either way. Japan’s government had essentially no debt in the 1949-1965 period, but there was still a yen and still a Bank of Japan. 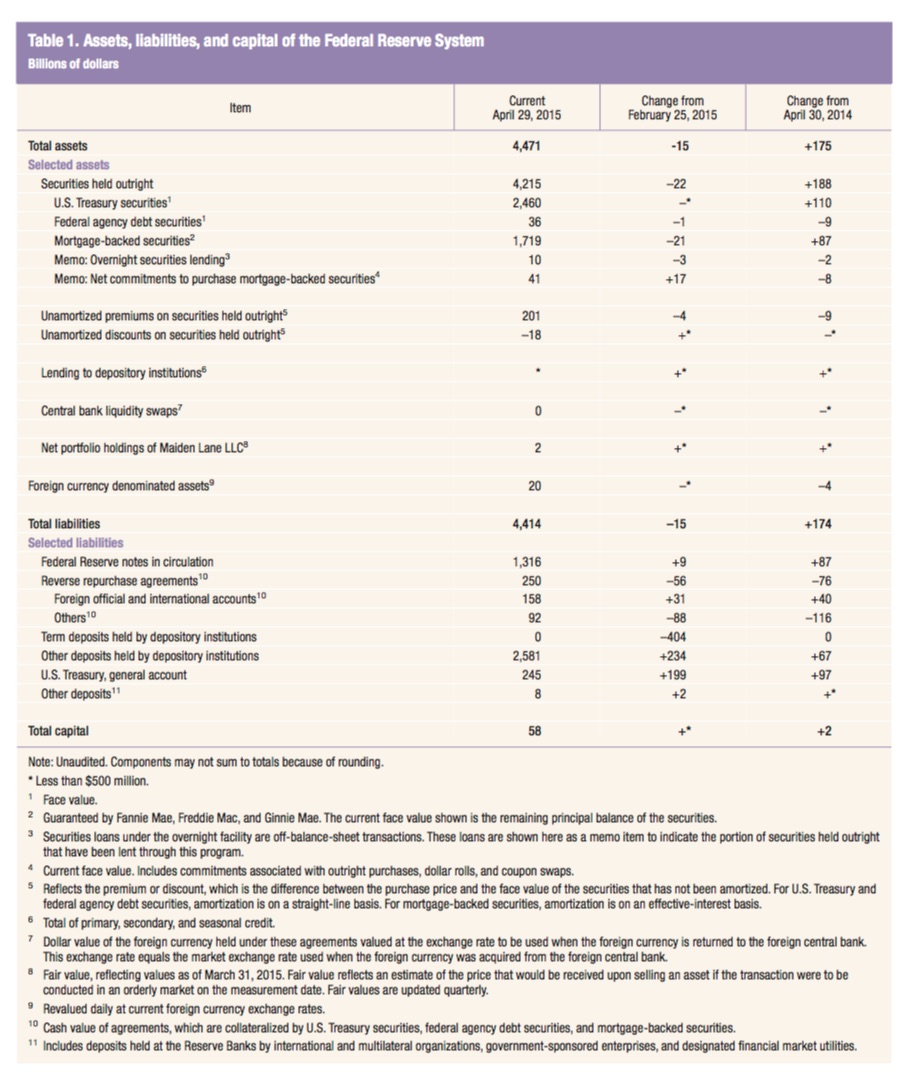 It’s pretty simple, although I would note the large holdings of mortgage-backed securities among assets, which is a nice example of the principle that a central bank doesn’t have to hold government bonds. (MBS are basically a securitized pool of home mortgages. The debtor is the homeowner. There is an element of government guarantee related to MBS, but that doesn’t make it “government debt”. MBS could function perfectly well without this government guarantee, and technically did not have such a guarantee until Fannie Mae and Freddie Mac were nationalized in 2008.)

The liabilities are almost entirely currency in circulation, and deposits. Together, these constitute “base money,” which is, basically, the currency of the United States.

The ECB’s balance sheet is a little more complicated. We looked at it earlier in 2015:

We also took a look at the Bank of England’s balance sheet, since 1696.

Here’s what it looked like in 1696, just after its founding:

I am mentioning this in part because I previously thought of the Bank of England and also the early U.S. central banks (the First and Second Banks of the United States) as primarily commercial banks, but now I see them as having been conceived essentially as currency-issuing central banks. This is not a State Street or BB&T that just happened to expand into the currency-issuing business.

What is to be made of all this?

As long as the currency issuer is reasonably well-behaved, and maintains a sound gold standard policy as the Bank of England did for many years, banknotes are superior to coinage. It is not really possible to “inflate or deflate the money supply” while on a gold standard system, although there is some possibility for favoritism in the matter of short-term discounting of bills. The potential for “inflating or deflating the money supply” really lies in the realm of commercial banking, which is not so much in the realm of central banking and currency issuance.

Some people consider the Bluehelmets to be a rather sinister bunch. This has produced a number of alternative proposals, to eliminate a private monopoly currency issuer or “central bank”:

One is to require all payment in the form of coins and bullion. This is actually written into the U.S. Constitution, although we like to ignore that. Typically, this proposal might include a “100% reserve bank of deposit” along the model of the 17th century Bank of Amsterdam — or the Bank of Hamburg, since the Bank of Amsterdam in actual fact was secretly making loans as early as its first decade, and did so continuously thereafter. The contemporary equivalent of this kind of “100% reserve” system would be GoldMoney, founded by James Turk, and its more recent descendant, BitGold. Similar proposals are following in the wake of decisions by states like Utah to make gold and silver coin more usable in practical payment systems. This is an entirely workable idea, although there are some issues regarding implementing it on a very large-scale basis, due to the large amounts of bullion required. These days, I doubt that many coins would actually be used; and those that were would still likely be mostly token coins. Silver today is really usable only as a token coin, and gold has such a high value that it would not be used much unless people didn’t want to leave a paper trail. Thus, these “100% bullion” proposals tend, in practical terms, to become largely “e-money” systems like GoldMoney/BitGold.

Another solution is the “free banking” model, popular today as an “End the Fed” proposal (and is the Fed alternative I mention in my book Gold: the Monetary Polaris). Banks would still make money from currency issuance, but the profit would be distributed among many banks rather than being concentrated in one central bank. The United States used a “free banking” model (more or less) from 1789 to 1913. Conceivably, the Bluehelmet-types could just as well own a dozen or three of these currency-issuing banks as a single central bank, and thus end up controlling that system as well (there’s some evidence this was the case during the National Bank System era), but it does hold some promise for decentralizing power, wealth and influence.

A third solution is to make the government itself the direct currency issuer, rather than a central bank owned by the Bluehelmets or their ilk. This was promoted by Bill Still, in his documentary The Money Masters, and is also popular among the “Modern Monetary Theory” types. Obviously, in this case the government would enjoy all the advantages of currency issuance. Since the Federal Reserve claims that it pays to the U.S. Treasury the profits (excepting some operating expenses) enjoyed from the interest income on the Treasury bonds it holds, then, according to this story, the U.S. Treasury is already enjoying about as much financial advantage from currency issuance as it would if the entirety of it were nationalized. (Even if this were true, there would still be some issues regarding the influence of such a large holder of government debt.) The main problem with this proposal is that governments that issue currency directly have a long history of blowing up their currencies with overissuance at the first incidence of need. This was true of many Chinese governments from the 11th to 15th centuries, the French government in 1720 and again in 1789, all of the American Colonies, and also of the U.S. Continental Congress during the Revolutionary War period. I suppose someone would claim that we would never be so stupid today; but, judging by the output of the “Modern Monetary Theory” types, they don’t seem to have any notion at all regarding what is and is not possible with such a system, and would be certain to blow things up in short order.

With a gold standard system — and ultimately, any system with some modicum of stability of currency value, including any fiat floating currency — the amount of currency that is issued is related to the demand for currency. You can’t just print willy-nilly whatever you want. With a proper fixed-value system like a gold standard system, you don’t really have any direct influence on the base money supply at all. It is a residual of the mechanisms that keep the value of the currency at its fixed-value benchmark. I talk about these issues in great detail in Gold: the Monetary Polaris.

Later, we will talk about bank deposits and various forms of short-term lending, known colloquially as the “money market.” This is really the realm of credit, not money.