A friend recommended that I look at a 2005 study of tax reform options, the “President’s Advisory Panel on Tax Reform.” It is here:

It has some commentary on the FairTax proposals, beginning on page 207. In general, I have the impression that the panel didn’t want to consider major tax reform, of either the Flat Tax (which is not mentioned) or the FairTax variety, so they made up some excuses to dismiss it. I will just point out a little bit of the flavor of their arguments.

Using the Extended Base [FairTax proposal] and assuming low rates of evasion, the Treasury Department calculated that the tax rate required to replace the federal income tax with a retail sales tax would be 22 percent on a tax-exclusive basis. (p. 209)

Lower- and middle-income families would be especially hard hit by a stand alone retail sales tax. For example, the Treasury Department estimates that a hypothetical single mother with one child making $20,000 per year currently pays $723 in total federal taxes (including both the employee and employer shares of the Social Security and Medicare taxes). Under the stand-alone retail sales tax, her tax bill would go up to $6,186 – a tax increase of over 750 percent. (p. 211)

To this we can include a “cash grant” (“prebate”):

How would the cash grant program work? The federal government would be required to send monthly checks to every family in America, regardless of their income level. If the tax rate was 34 percent and the before-tax poverty level for an individual was $10,000, all single individuals would receive $3,400 a year from the government. The cash grant would also be adjusted for marital status and family size. For married couples with two children, the cash grant amount in 2006 would be $6,694 per year. (p. 212)

Now we are fluffing up the “prebate” from $2,256/adult/year, under the FairTax proposal for 2005, up to $3,400, using some rather dubious math (apparently confusing “inclusive” and “exclusive” rates).

It goes on from there, in a similar manner.

The FairTax proposal is, unquestionably, a bigger change from the present status quo than Flat Tax proposals which mostly just upgrade existing institutions. Thus, there is a lot of fear that somehow it “wouldn’t work,” especially regarding tax evasion. This has some basis, since I think tax evasion might be high if these very high sales taxes were imposed in addition to existing income and sales taxes, which seems to be a sort of unconscious assumption. However, I think that evasion would be much lower if these sales taxes were imposed while other taxes were also eliminated. The “prebate” proposal is also complicated for a number of reasons, and untried proposals make people nervous. So, this all amounts to not much more than “I’m nervous.” But, you can’t make big changes without making big changes. How is incrementalism working for you hmmmm? 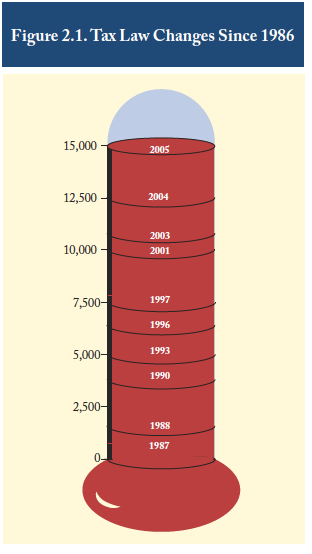 In general, good policy tends to produce good outcomes, and although the FairTax proposal may have some notions that turn out to be flawed, in general it is so much better for business than the present status quo that the outcome, one way or another, would probably be pretty good. This might seem exceedingly vague, and yet, I find that the actual outcomes of history are so divergent from what one might “rationally” expect that these sort of vague notions turn out to be the most accurate. Bulgaria reduced its payroll tax by ten percentage points, and the result was not only that tax revenues increased (along with an expanding economy), but they actually increased as a percentage of GDP. How is that even possible? And yet, it happens again and again and again.