On the Path To a Better Monetary System: Bretton Woods Didn’t Fail Because of the “Balance of Payments”
July 24, 2014

Today is a period when we are building the foundation for the monetary systems of the future – what former Fed chief Paul Volcker recently called “the need to develop an international monetary system worthy of our time.”

This “foundation” consists mainly of ideas – the ideas that are later implemented in real-world systems. Without the ideas, you can’t make the system. It’s as simple as that.

I think there is a lot of trauma remaining today regarding the last “system” we had, the Bretton Woods arrangement of 1944-1971. This was a prosperous time worldwide – the best era, I would say, of the last century since 1914. Not the sort of thing that anyone would want to come to an end.

So, you can see why its accidental and premature death was a bit traumatic. I think we need to review this today, and get over it.

Bretton Woods blew up, in the midst of peace and prosperity, for two basic reasons as I see it: first, because governments wanted to fool around with Mercantilist money-jiggering notions; and second, because they really had no idea how to manage the system that existed, or even what it was for.

The proximate cause for the demise of Bretton Woods was that president Richard Nixon installed his good buddy Arthur Burns as the head of the Federal Reserve in February 1970. Burns, along with the other Nixonites, advised Nixon that the minor recession of the time could be resolved with a certain amount of money-printing. Their target was an increase in nominal GDP of 9% in 1972, putting everyone in a good mood for Nixon’s re-election that year. They called this the “game plan.”

Well, you can’t just go print money woohoo and also maintain the dollar’s Bretton Woods gold parity at $35/oz. To do that correctly requires currency-board-like techniques, as establishment economists have finally learned after a few decades of blowing up countries right and left. Currency-board-like techniques require the abandonment of a “discretionary, domestic monetary policy” aimed at Mercantilist economic management.

You might assume that, at some point, the Nixonites got together, and had a careful discussion about whether to stick with the Bretton Woods gold standard arrangement, or to have a little adventure with the printing press in service to political expediency, with floating fiat currencies the inevitable outcome.

But, that didn’t happen. As John Butler recalls in his recent book The Golden Revolution, the Nixonites got together a few days before Nixon publicly ended the U.S. dollar-gold parity policy on August 15, 1971. Paul Volcker, then Under-Secretary for the Treasury for International Affairs, was there. Arthur Burns, then head of the Fed, was there.

Apparently, the biggest advocate at that meeting for maintaining the Bretton Woods dollar/gold parity at $35/oz. (i.e., the gold standard policy) was: Arthur Burns!

The head of the Fed, and lifelong monetary economist, had no idea – no idea! – that his money-printing strategy was having a head-on collision with the existing gold standard policy.

No idea. The degree of ignorance implied, among the world’s supposed top experts, is even now difficult to fully grasp.

I’ve called it: “The Mind-Bending Ignorance of the Bretton Woods Years.” My mind bends even today.

Oddly enough, the little narrative I just presented is actually completely different than what you might hear from mainstream academics today, who are actually repeating the view that was conventional during the 1960s as well.

“The U.S. dollar’s reserve currency status, in the Bretton Woods system, caused a persistent U.S. current account deficit. This current account deficit was exacerbated by heavy deficit spending by the U.S. government, to fund both president Johnson’s Great Society welfare programs, and the Vietnam War. The huge Balance of Payments imbalances eventually led to the demise of the system.”

Here’s a version of that story, from the IMF’s own website.  Another typical mainstream account can be found at Wikipedia, similar to what you’d find in college textbooks.

I want to emphasize that this was not one guy’s idiosyncratic notion, but a widely-held, mainstream view, and remains so today.

I’m not going to get into the nitty-gritty details of these issues in a short op-ed. But, we should at least be able to see whether this description had any relation to reality.

First: The U.S. supposedly had a chronic current-account deficit of world-monetary-system-destroying proportions. Did this exist? 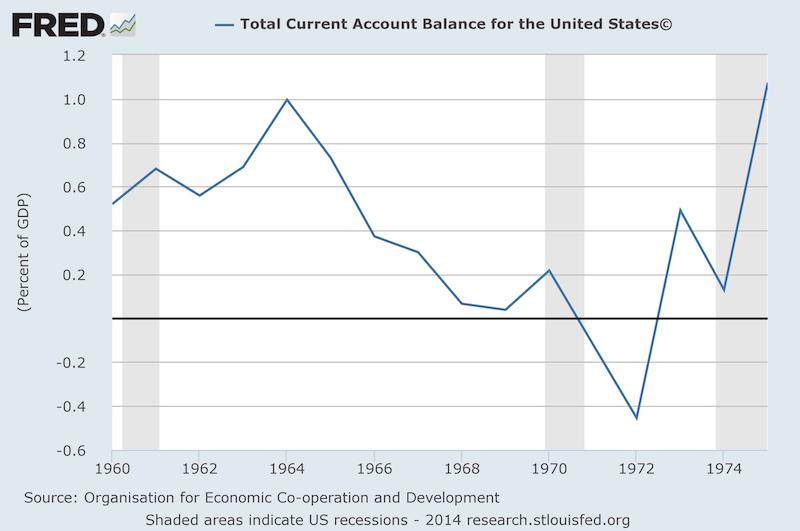 Second: Did the U.S. Federal government have a large deficit, supposedly funded by the “exorbitant privilege” of selling Treasury bonds to foreign central banks for use as reserve assets? 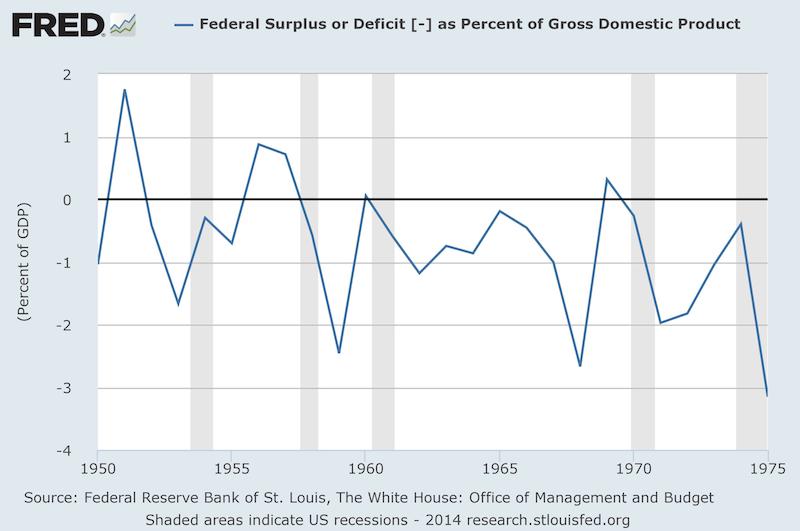 As you might imagine, if deficits are small and GDP was growing smartly, debt/GDP ratios were steadily coming down to very manageable levels. 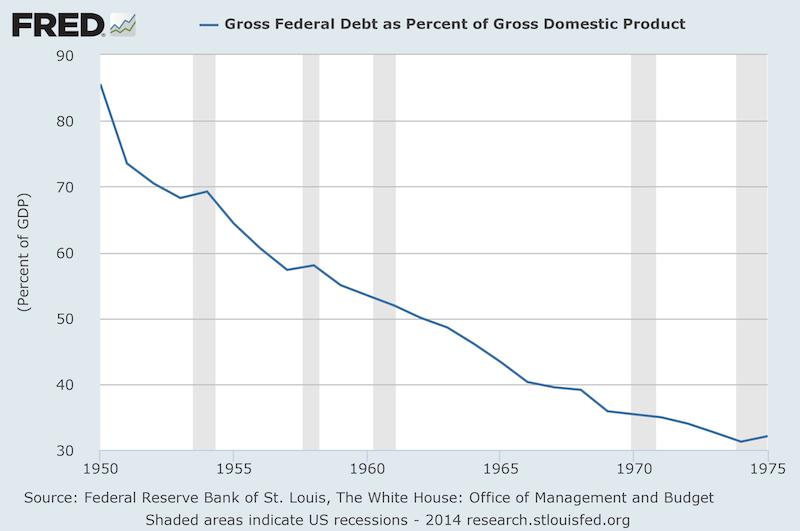 Nothing very disastrous there either. When the Bretton Woods era ended in 1971, U.S. Federal debt/GDP was about 35%.

How about the yield on the ten-year Treasury bond? Was there any evidence of some “exorbitant privilege” enjoyed by the reserve-currency issuer, such as unusually low interest rates? 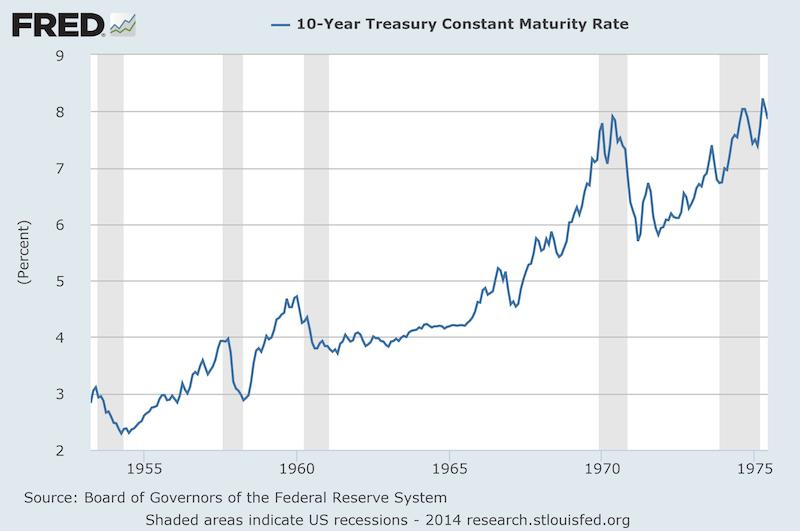 Treasury yields were rather high during the 1960s, among the highest in U.S. history up to that point.

Let’s take a big-picture look at the Bretton Woods era as a whole. Is there evidence of major “balance of payments imbalances” worldwide that suggests some kind of impending catastrophe? 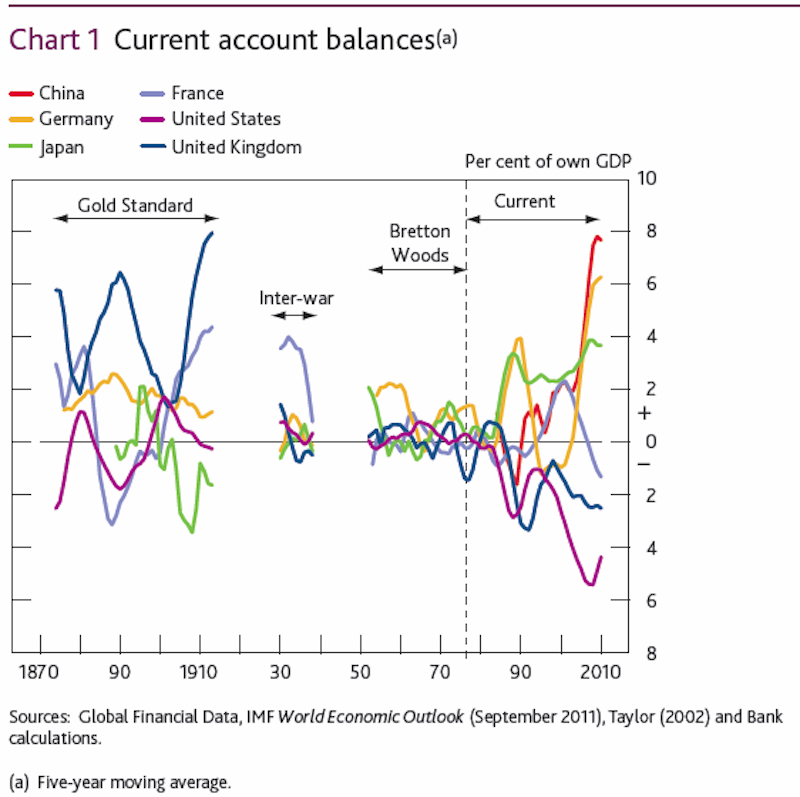 Actually, the entire Bretton Woods period had some of the lowest “balance of payments imbalances” of the last 150 years. (This was due in part to capital controls common at that time.) Not only that, the very large “balance of payments imbalances” of the pre-1914 era actually were no problem at all. The “Classical Gold Standard” era ended due to printing-press finance related to World War I, not because of any issue related to international capital flows.

In short, the common narrative is hooey. A fairy tale!

What actually happened is so simple, Adam Smith had it figured out in 1776:

“Should the circulating paper at any time exceed [the appropriate amount within the context of the gold parity system], it must return immediately upon the banks to be exchanged for gold and silver.”

Or, to summarize in three words: Too Many Dollars.

That’s all it was.

I want you to try to imagine the world’s top monetary experts traipsing from one five-star hotel to another, having Weighty Discussions about the implications of a fairy tale which did not actually exist.

If you want to know why we don’t have a gold standard system today … that’s why.

If we are going to become able to build great monetary systems in the future, we need to be able to correctly diagnose past errors – especially when those errors can be summarized in three words. Otherwise, how would we avoid doing the same stupid thing again? Sometimes I wonder if the human species is capable of this; and yet, in the past, it did happen. Adam Smith figured it out. So did David Ricardo, John Stuart Mill and others.

We are fortunate that the process of deterioration of the present monetary arrangements, though well underway, has been moderated recently. There is still a lot of foundation-building to do, in the realm of ideas, before we are ready to actually create new real-world institutions with the capability of lasting for centuries.