Last week, we laid out some basic propositions regarding parks:

1) A city should consist of streets (perhaps 80% Narrow Streets for People, 17% Arterials, and 3% Grand Boulevards as a rough guide), private property including building footprint and various privately-owned (but possibly publicly-accessible) outdoor spaces such as back yards, courtyards and patios, and non-street public outdoor space including parks and squares. I gave a rough guideline of 20% of all city surface area given to public parks and squares. There really isn’t much that doesn’t fit in these categories, so if you are lost in jargonland thinking about “urban open space” that is not a street, park or square, then what is it? And, shouldn’t it really be a street, park or square? Otherwise, it probably qualifies as nameless filler garbage (“green space”).

3) Parks should be designed for human use — even wilderness areas have things like hiking trails — and not just be landscaping throwaways like a rectangle of mown grass.

4) Parks should have definite boundaries, and not just be some undefined area with an unusually high concentration of filler greenery.

Streets themselves, especially Narrow Streets for People, can serve some of the purposes of parks. We often find that, if streets are particularly beautiful, then people do not feel as much of a need for parks. Many of the classic Italian cities are notably skimpy on parks, and yet they remain major tourist destinations. For example, if the place right outside your door looked like this: 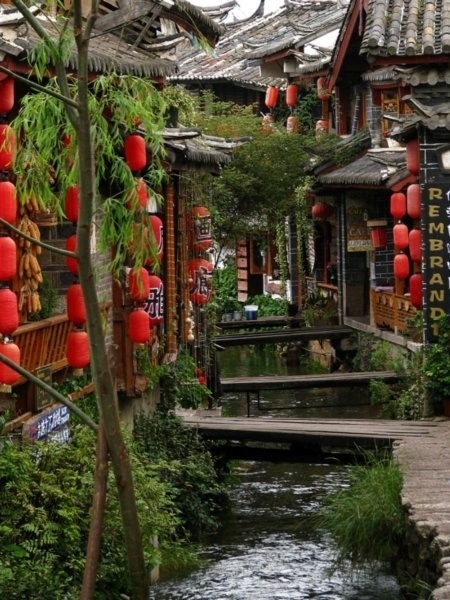 Then you might not be so desperate to have a park nearby. This is Lijiang, China. 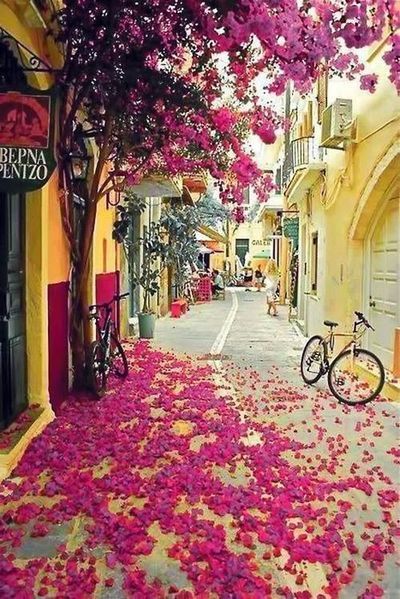 Here’s another place where the street has become as pleasant and beautiful as a park. Corfu, Greece. 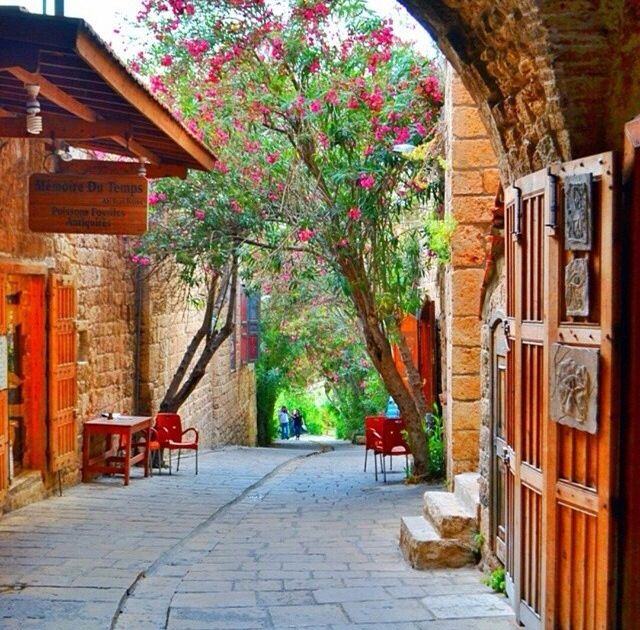 However, when I say “parklike” I mean that it is pleasant and has some vegetation. This is most definitely a street, and has no excess “green filler.”

Urban residences, notably townhouses, can have small yards attached. However, this tends to be expensive, and even so, the yard is not very big — not big enough for a running eight-year-old to get a good head of steam going. A 1000 square foot yard, in an urban townhouse, is real luxury. So, even those who are fortunate enough to have their own private yards have a natural desire for some kind of larger open space. Plus, it can be fun to go where there are other people too.

Most people will have essentially no yard at all. They live in apartments, or perhaps, especially in the Asian examples, very small single-family residences with a “yard” or “courtyard” that is so small as to be more of a lightwell, perhaps fifty square feet. People need a place to get outside.

A city should be a place that is designed for the entirety of the human lifespan. People want to live in a place that is friendly not only to a working adult, but to a mother pushing a stroller, a four-year-old or twelve-year-old walking on the street, or a seventy-five-year-old who can’t really walk more than about 200 meters easily. If we look at a typical human lifespan, we find that people are children with limited ability to move around the city on their own until about age 15; or seniors also with limited mobility from perhaps age 65. That leaves fifty years in the middle, but during those fifty years, people might spend most of ages 25-55 as parents of small children, and possibly, during age 45-65 or so, have elderly parents living with them. Thus, we find that there is hardly any time of life when people would not benefit greatly from being close to their parks. This describes, pretty simply, one reason why the 19th Century Hypertrophic pattern of urbanization in the U.S., which does not provide for a pleasant environment outside the front door and within a radius of a couple hundred meters, was largely abandoned after 1950 for the suburban pattern of the large backyard.

Thus, the utility of a park increases greatly if it is within perhaps 300 meters of the residence. This tends to mean small parks, and lots of them.

A “small park” is still many multiples larger than even a rich person’s private urban yard. A 2000 square foot park (1/20th acre, or 40×50 feet) is quite small by most standards of public parks, but is large enough for easily a dozen visitors. A one-acre park (43,560 square feet, about 200×218) is still a rather small “public park”, but can be experienced as a spacious refuge within the city.

People have even been experimenting with “parklets” of extremely small dimensions, perhaps 8×25 feet (200 square feet). 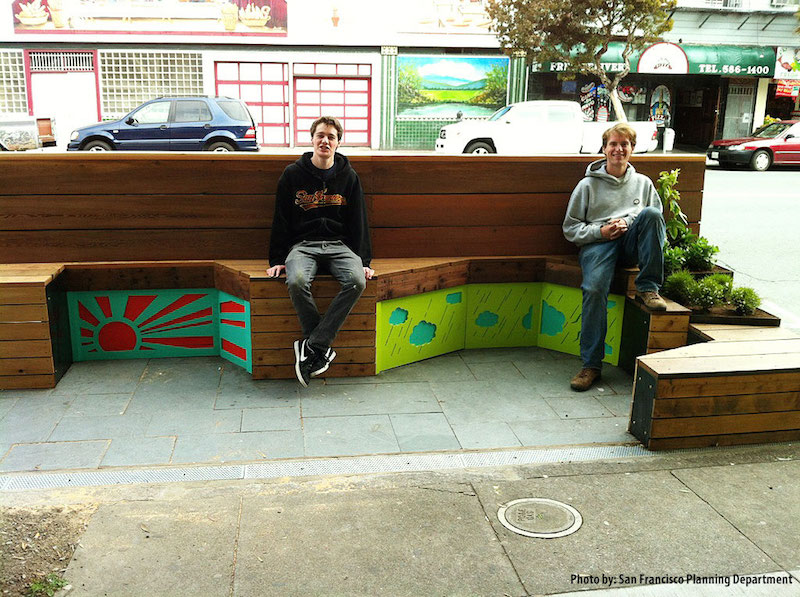 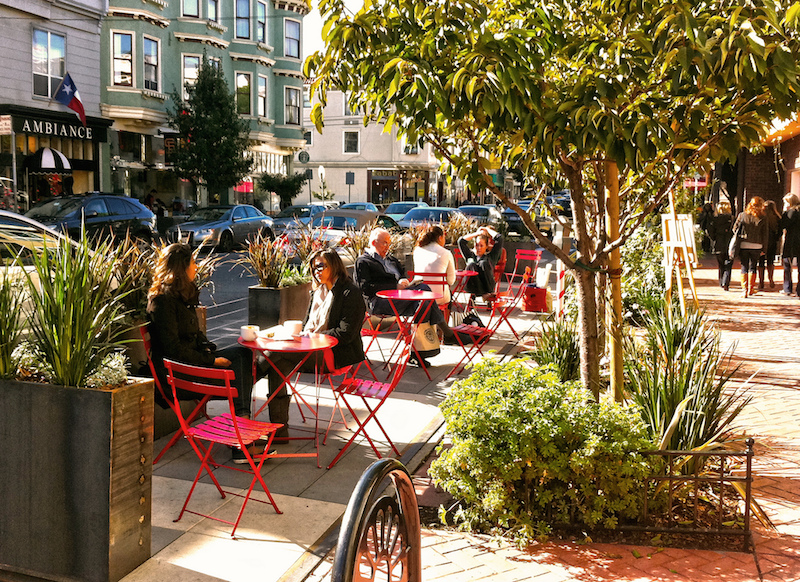 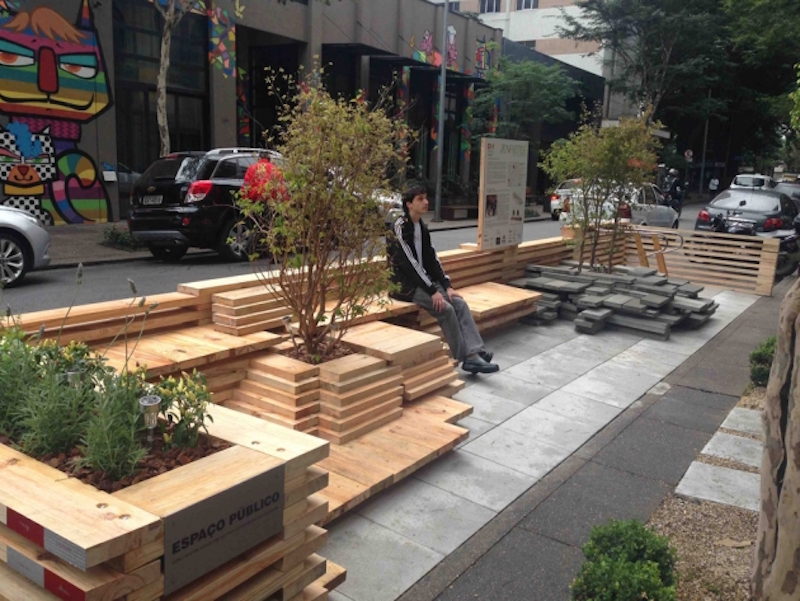 These parks are so small that literally two hundred of them would add up to just one acre of land. And, wouldn’t it be nice to have two hundred micro-parks scattered around the city? How about two thousand?

One thing that is interesting about these “parklets” is that they are identifiably “parks.” They are not just benches on the sidewalk, or a cluster of planter boxes. They also have definite boundaries. They are carefully designed for human use. Also, to the extent possible, they are “enclosed” from the adjacent Arterial roadways by some kind of rear barrier. 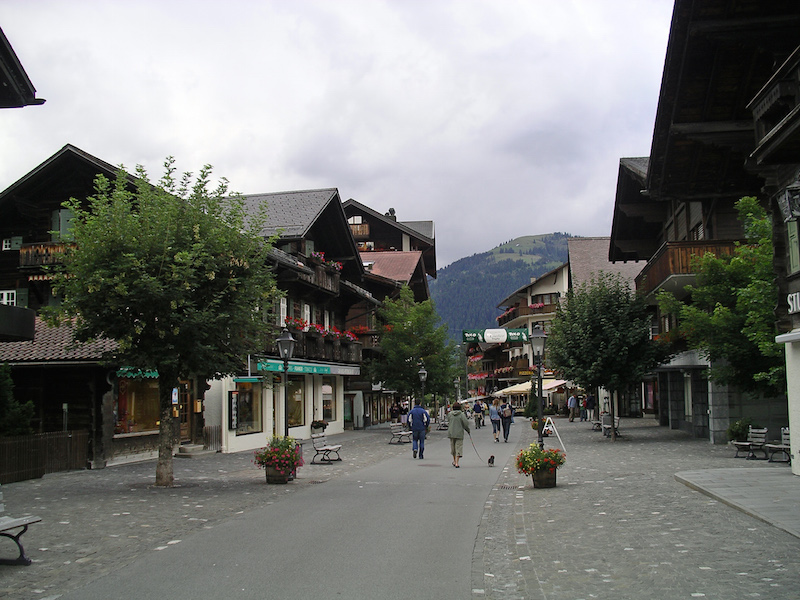 For example, here is a street in Switzerland, which is a nice enough place, and sort of parklike, but it is not a park. This despite the fact that it is many multiples larger than the “parklets” that people are fitting into an onstreet parking space. Here we have benches and trees, but no definite boundaries of the parklike area, and certainly no name, including the word “park,” because it is not a park, it is a street, with a lot of filler because it is really too wide for what it is.

Although this sort of thing is not so bad, I suggest that it would be better to just make the street a street, and then, use all the extra space to make a real park. 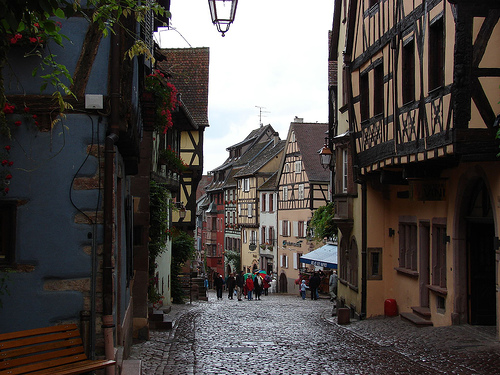 Here is a street in Alsace, France. It is much narrower than the Switzerland example, and has no trees or benches. But, it is just about as pleasant, serving its function as a street. (The streets we looked at earlier are even narrower.) It also uses much less space, which you can then use elsewhere to make a real park. Obviously, this requires the ability to design such things. The Switzerland example looks like an existing street that was converted into a pedestrian area. So, if you have to make do with something that is already there, you do what you can. But, if you can design from scratch, then do it properly. Make streets. Make parks. Don’t make fuzzy mixtures of the two.

I’m starting with the idea of small and plentiful parks because, especially in the United States, we have a tendency to go the other way, toward very large parks which, by their nature, must also be rather rare and widely-spaced. I think there is a notion of “economy of scale” in parks, basically borrowed from mass manufacturing. People just assume that there are “economies of scale” in parks as there are in crude oil refining. (This is another Heroic Materialist notion.) But, perhaps that is not the case at all. Maybe there are “economies of small scale,” or basically, that ten small parks provide more value than one park ten times the size.

With a little more thought, we can see that a wide range of park sizes would be beneficial. You can also have a very large urban park, like New York’s Central Park (843 acres), which allows for things like long runs. But, a park like that can be a sort of “destination park.” In other words, it’s the kind of place that you might ride for thirty minutes on the subway to go to. Nothing wrong with that. But, it does not fulfill the need for something that is within a short easy walk of the residence, or which is easily accessible by stroller-pushing moms, small children, or seniors with mobility issues. Not very many people can live within 300 meters of Central Park, and those that do pay a high premium for the privilege.

What about privately-owned parks? Last week, I made the example of a large development in New Delhi, India, that included a large park. The development was called “Central Park.” 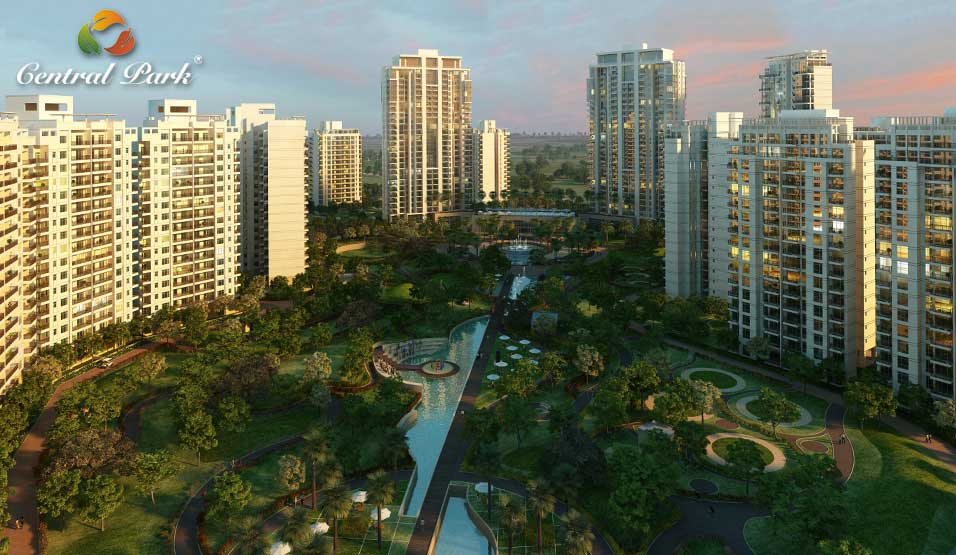 Although the development as a whole is called “Central Park,” does this park itself have a name? I think it should. A separate name, perhaps “Silver Moon Park” or some such thing. Heck, name it after the developer.

This is really a scaled-up version of a very common layout in Europe, the “euro-bloc”. Simon Vallee wrote a nice item about this form. 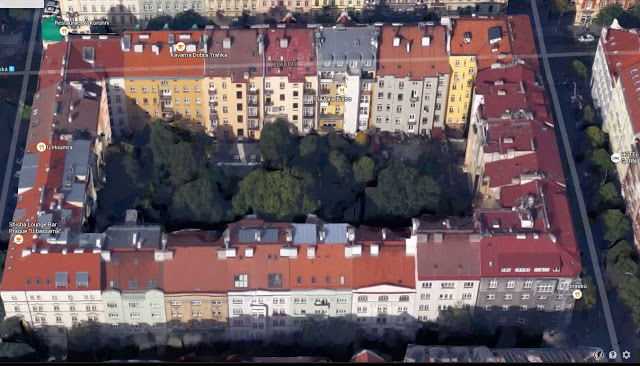 What is this interior space? If it was surrounded by one single building, and not particularly large, I would call it a “courtyard.” But, here it is ringed by multiple buildings, and is large enough to be park-sized. If it is separated into small privately-owned spaces, they would be backyards. Sometimes, spaces like these are actually off-limits to everyone, as apartment residents are not allowed there. The actual details of ownership, maintenance responsibility, accessibility and use vary from situation to situation. But, if it a shared space, to be used by the many residents surrounding this area and perhaps even by others from the general public, then it fuctions very much like a park. Anyway, places like this can certainly fill the need for parks or courtyards nearby residences. We see a lot of this courtyard/eurobloc form in Paris:

Charles Gardner of oldurbanist.blogspot.com has noted that the eurobloc form has quite a few advantages to other common solutions. By making the center “courtyard” space a little larger, it becomes usable as a courtyard or park, as opposed to smaller areas that tend to become more like “lightwells” or “airshafts” which provide some window exposure but are not used as a separate outdoor space in themselves. For example, here are some classic euroblocs in Berlin, Germany: 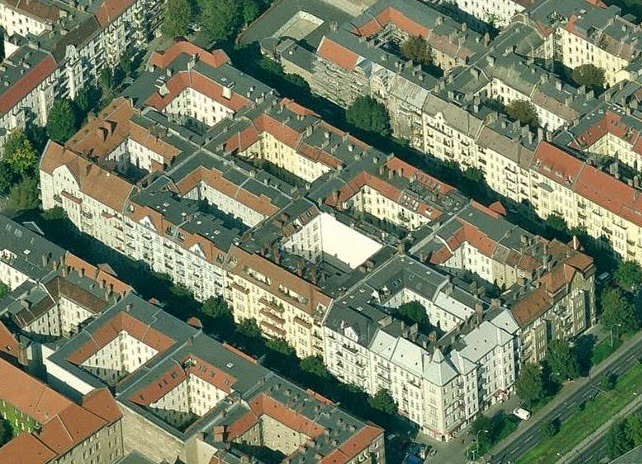 The open space here is large enough to be used as a courtyard, as opposed to various U.S. examples where the center space is either segregated into separate backyards, or airshafts. Also, they serve better as lightwells and airshafts (window exposure), because they are bigger, and the building depth is less than in typical U.S. examples.

So, there are several workable solutions to the problem of putting a nice outdoor space, beautiful and intended for human use — what we call parks and shared courtyards, or at the very least a Narrow Street for People that is nearly parklike in its natural beauty — within a short distance of people’s homes. You can go for the big destination parks too, but that is really more like the hot fudge on top of the sundae. New York’s Central Park, and the other large parks of New York City, didn’t make up for the fact that living in Queens was still terrifically ugly. If you don’t have something that is close by the residence, then people will try to find another solution to get what they want, which, in U.S. experience, means migrating to the suburbs.