This is a topic we’ve covered before, but that was a while ago (three years!) and it is still important — more important now than then, actually.

I got an email from a reader who read about the debt/equity swap idea in the Forbes article below, but couldn’t figure it out. He’s a medical doctor, so he certainly has the capacity to figure out these very simple ideas. However, nobody ever teaches anyone these things — why is that? — and I figure, if an M.D. can’t figure it out, without further study, then what about a politician or a journalist?

“As soon as men abandoned the life of wandering, tribal hunters to till the soil they needed to predict the seasons. Such knowledge was required in order to know when to plant, when to expect floods in fertile valleys, when to expect rainy seasons, and so on. Months of backbreaking work were wasted by the unavailability of the calendar, a convenience we take for granted. The men who first studied and grasped the regularities of sun, moon, and stars that presage the seasons had a valuable commodity to sell and they milked it to the fullest at the expense of their credulous fellowmen. The occult priesthoods of early astronomers and mathematicians such as the designers of Stonehenge, convinced their subjects that they alone had contact with the gods, and thus, they alone could assure the return of planting seasons and weather favorable to bountiful harvests. The staging (predicting) of solar and lunar eclipses was particularly effective in awing the community. The general success resulting from following the priesthood’s tilling, planting, nurturing, and harvesting timetables insured the priesthood’s power. Today’s Christmas holiday season continues the tradition set by ancient priesthoods, who conducted rituals on the winter solstice to reverse the retreat of the sun from the sky.  Their invariable success was followed by wild celebrations.  Popular knowledge of seasonal regularities was discouraged by every manner of mysticism and outlandish ritual imaginable.  Failures in prediction were blamed on sins of the people and used to justify intensified oppression. For centuries people who had literally no idea of the number of days between seasons and couldn’t count anyway, cheerfully gave up a portion of their harvests, as well as their most beautiful daughters, to their “faithful servants” in the priesthoods.

The power of our finance capitalist money cult rests on a similar secret knowledge, primarily in the field of economics.”

It might seem incredible that “the priesthood” could wield such influence just because they could count days on a calendar. However, this business about how banks work is actually not much more difficult than that. But, nobody seems to have been taught this stuff. As a result, those who understand it can wield great power. You notice, for example, that none of the bankers are talking about this debt/equity swap idea. I’m sure they know about it. But, they have discovered that if they don’t talk about it, then politicians don’t consider it as an option. This makes politicians manipulable, and makes them easy to drive towards policies which amount to stealing very large amounts of money from taxpayers (“a bank bailout” or “recapitalizing the banks”) and giving it to the bankers.

First, you have to understand how banks work. It’s actually quite easy, so just jump in and figure it out.

However, that series has a lot of generalized info, covering a broad range of situations. Let’s take a specifc example, as it applies to our topic today. We will look at Citibank, as Citi is in fact a prime candidate for a “debt/equity swap” right now, today. 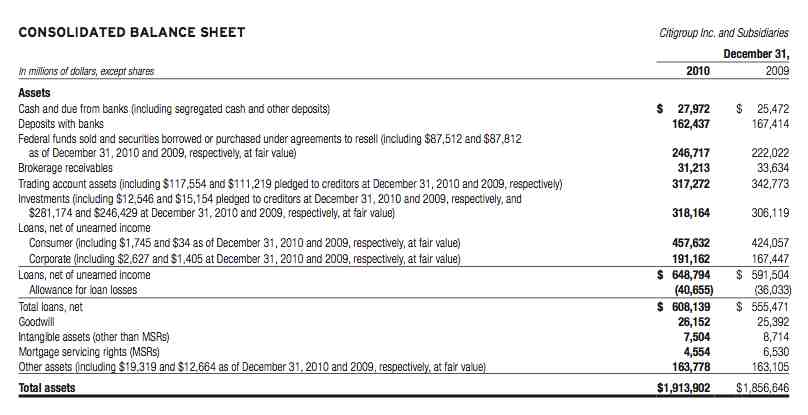 Here are the assets of Citigroup. This is a rather complicated balance sheet, as it is consolidated and includes all sorts of activities, not just the usual making of loans. Some of the terminology is confusing. “Federal funds sold” is, I think, short-term collateralized lending to other financial institutions. “Trading account assets” is probably mostly derivatives, and other stocks, bonds etc. “Investments” are probably mostly bonds, such as government bonds, mostly held to maturity. Then there are some loans, of course. This is what Citigroup owns — assets worth supposedly $1,913 billion. 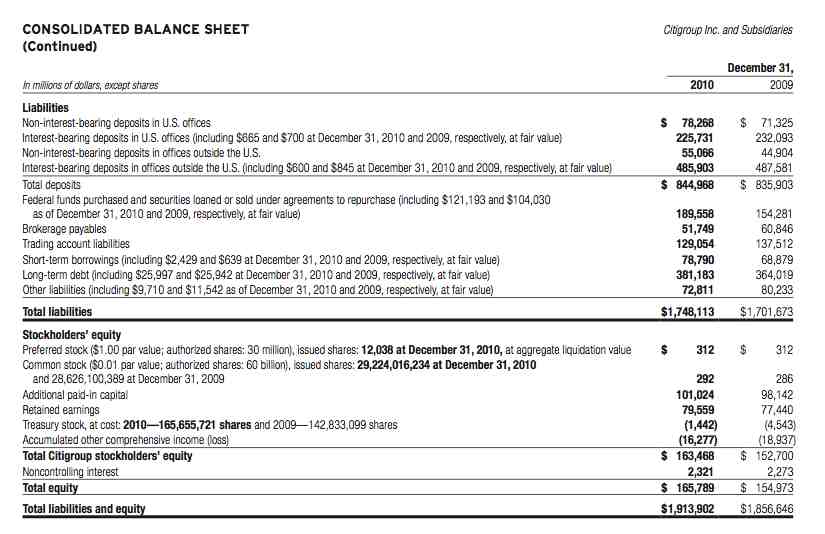 Here is what Citigroup owes to other people. We see $844 billion of deposits, “Fed funds purchased” (short-term borrowings), and $381 billion in long-term debt. All in all, liabilities amount to $1,748 billion.

The difference between the assets and the liabilities is the shareholders’ equity or “book value,” here $165 billion. Thus, we have a capital ratio of $165 billion/$1,913 billion, or 8.6%.

This means that, if Citi’s assets fall in value by 8.6%, then the company owes more than its assets are worth. This is sort of like “being underwater on your house.” You owe more than the house is worth. Actually, a crisis begins long before the capital ratio falls to zero, because if it is approaching zero, pretty soon people will start pulling their money from the bank. If nobody is willing to loan money to the bank, for fear that it will be defaulted upon, then the bank will soon run out of money, and default.

In other words, the bank enters bankruptcy. “Bankruptcy,” oddly enough, is one of those things that is not particularly well understood. All it means is that you then have a process of what happens after an organization defaults on an obligation. Lots of things can happen — that’s why there are various “chapters” of the bankruptcy code. You have probably heard of “Chapter 11.” This means that the organization continues to function, although bondholders won’t get paid as much as they expected. There are other chapters that deal with liquidation and the like.

The point is, the company can still continue to fuction. General Motors recently went through bankruptcy, but it didn’t stop making cars. The airlines seem to go bankrupt every fifteen years or so, but they keep flying planes. Likewise, a bank can continue to function in bankruptcy.

Let’s say, arbitrarily, that the real value of Citigroup’s assets falls by 20%, to $1,530 billion. Now we have a rather large “negative equity” of $1,748 billion – $1,530 billion, or $218 billion. This is when the banks come screaming to the politicians, to get the taxpayer to make up for their losses.

The bankers would ask for around $218 billion to make up their losses, and then another $1,530*10%=$153 billion or so to provide the needed equity. This is a total of $371 billion to squeeze out of the innocent taxpayer — for just one bank!

What does the taxpayer get for his $371 billion? Nothing!

This is essentially what has happened in Ireland. You have to admit that is a really impressive level of theft. Because that’s what it is — pure criminality.

However, what is supposed to happen is that the bank enters the bankruptcy process. In this process, there is a hierarchy of seniority. Some people get paid, and some people don’t get paid. First, the equity (the shares traded on the stock exchange) goes to zero. Next, the trading account liabilities would probably be eliminated — that’s how it should work, anyway. Trading assets are liquidated, and become cash. Derivatives counterparties don’t get paid. Strictly speaking, depositors and senior bondholders are probably equal in seniority, but for our example we will make depositors senior. (In practice, this would be something to discuss in detail.) Fed funds purchased — short-term collateralized lending — will probably have the collateral sold, so that disappears along with an equivalent amount of assets. Brokerage payables and other liabilities we will assume are senior for now, although that might not actually be the case.

We also have assets of about $1,530 billion minus the assets sold as collateral, leaving $1,341 billion of assets. Liabilities total $1,426 billion.

The old equity holders are gone, so who owns the bank? Normally, the bondholders become the new owners, in some form. We will formalize that here with a debt/equity swap. The $78 billion of short-term borrowing and $381 billion of long-term borrowing get converted to equity. This leaves liabilities of $1,426B – $78B – $381B = $967 billion.

However, a bank has some franchise value, so it would probably trade at a premium to book value on the stock market. Let’s say the new bank trades at 1.3x book. That would mean an equity market cap of $374 billion * 1.3x or $486 billion. The bondholders thus started with $459 billion of debt, and ended with equity with a market value of $486 billion. Which is not a bad trade, when you think about it.

The losers, of course, were all those junior in the bankruptcy process, including shareholders, preferred shareholders, trading counterparties, and so forth. However, the depositors are 100% OK.

In practice, a bankruptcy of this size would probably disrupt the entire financial system, not because of “contagion,” a metaphor of a healthy person becoming sick, but because all the banks are as sickly as Citibank. The government would declare a “bank holiday,” figure out which banks need restructuring via a debt/equity swap, do it, and then reopen a few weeks later with healthy banks across the board. It wouldn’t cost the taxpayer anything. The banks would then have a clean balance sheet — assets have been marked to their true value, no more fudging — and ample capitalization.

The bank continues to function. It has the same offices, the same employees, the same services. Probably some operations would be eliminated — derivatives — and the whole banking system should be reregulated to more of a 1960s standard. The whole process is really just a red-penciling of the liabilities side of the balance sheet. It’s just a reorganization of who gets paid what. Not that complicated, really. This is how capitalism is supposed to work.

In fact, we already did this once before, in the “bank holiday” of 1933. Worked fine.