This week, we have a bit of updating of something we looked at before: the Bank of England’s balance sheet during the 18th and 19th centuries, when it was the premier institution managing a gold standard paper money system in the world. The Bank of England eventually served as the example imitated throughout the world, particularly in the latter 19th century and into the early 20th century. 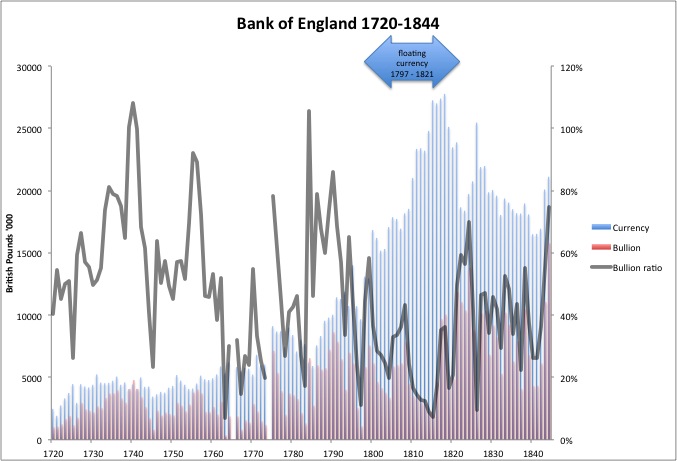 This chart looks only at currency (banknotes) outstanding and gold bullion reserves. As noted before, the interesting thing is that bullion reserves actually vary quite a bit. There is certainly not a “100% reserve” policy here, and indeed there doesn’t seem to be a policy of having any sort of stable ratio between the two. This is exactly what one would expect.

I will eventually fill in the data from 1844-1914, which will give us quite the magisterial view of the Bank of England’s history. I think this is important, to dispel the silliness common today which considers a gold standard system to be related to gold mining production, imports or exports of gold, balance of payments “imbalances,” “price-specie flow” mechanisms, and that sort of thing. It’s all a load of baloney. A gold standard system operates a lot like a currency board.

Steve Hanke in GlobeAsia, May 2012: A Gold-Based Currency Board Please

It is a little difficult to interpret the role of demand deposits on the Bank of England’s balance sheet. Today, demand deposits at the Federal Reserve and other such central banks are considered part of base money, because they are accepted as an ultimate means of payment. The Bank of England had a somewhat hybrid role, especially in the 18th century. Nevertheless, here’s the data: 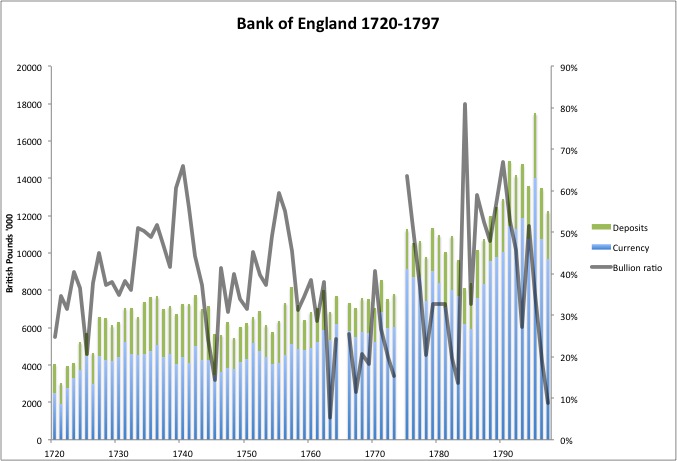 The “bullion ratio” now refers to the ratio between bullion holdings and the combination of banknotes in circulation and demand deposits.

Here is some data on other central banks that operated a gold standard system: