We are continuing our look at the Bank of England during the “Classical gold standard” years, especially 1844-1913.

Today, we will look at some of the BoE’s daily operations, in particular the evolution of its balance sheet on a weekly basis during the years 1904 and 1905, a relatively placid time. 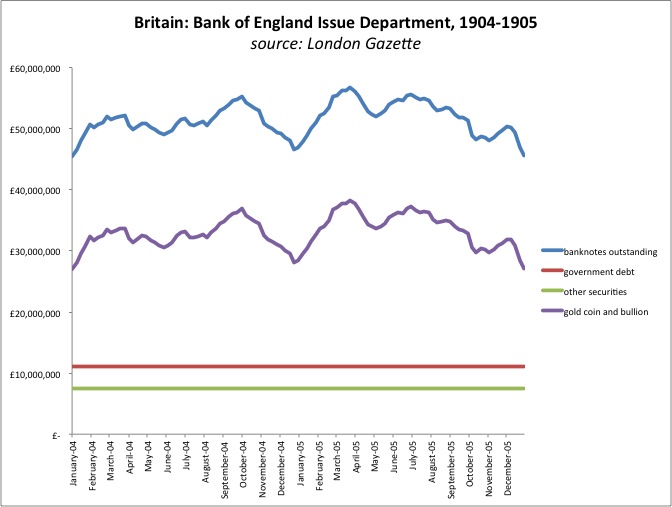 The Issue Department apparently had a rather simple system. It would either take gold and deliver banknotes, or take banknotes and deliver gold, at the parity price of £3 17s 10.5d per ounce of gold. This is basically a currency-board type operation. However, the Issue Department did not hold gold exclusively as assets. Government debt and other securities (corporate and perhaps foreign sovereign debt) were a significant part of its assets. There were no changes in either during this two-year period. Over the longer term, government debt holdings remained stable while other securities rose from time to time. The Issue Department’s management had some discretion over the composition of its assets. As gold bullion holdings grew due to the gradual increase over years of banknotes in circulation, they would occasionally trade some non-interest-bearing gold bullion for some interest-bearing bonds.

We see some definite seasonal patterns, with a decline in banknotes outstanding toward the end of the year and a rise afterward. 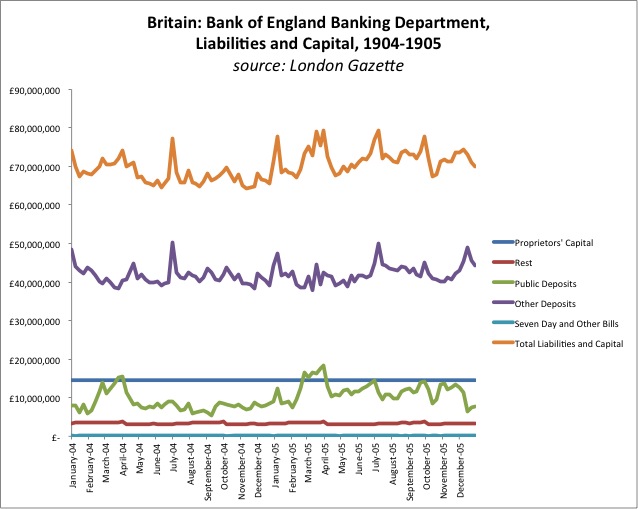 The liabilities of the Banking Department were mostly deposits, both public (government) and private (mostly other banks, i.e. “bank reserves”). 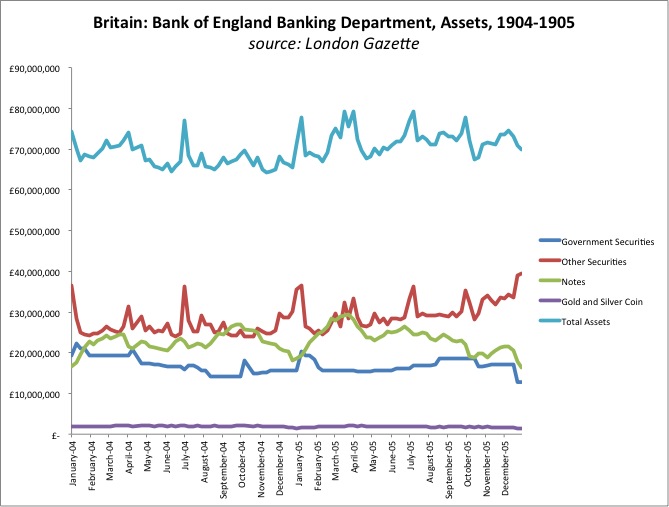 On the Asset side, the Banking Department had government bonds, other securities (corporate and foreign sovereign bonds), and notes (I believe these were loans). There was a little bit of gold bullion, but not much. 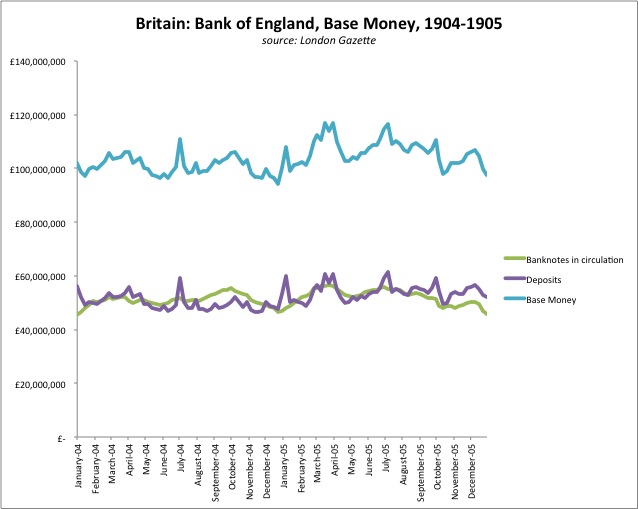 We combine banknotes outstanding and bank reserves (deposits at the BoE) to produce base money. About 50% of base money consisted of banknotes and 50% was deposits. Base money was highly variable from week to week. What produced these variations? Obviously, it was a combination of both the activities of the Issue Department and the Banking Department. The Issue Department mostly worked on an automatic currency-board system as described. The Banking Department had a much more discretionary operating pattern, although one that nevertheless coincided with the overall operating framework of a gold standard system.

A “private market participant” could go to the Banking Department and ask to borrow money at the Discount Rate. The Banking Department could choose whether to lend the money or not, the terms and so forth. The initiation of the transaction, or the discretionary element, was shared between the borrower and the lender.

By “discretionary” I don’t mean in the manner of floating fiat currencies today, where policy boards just make stuff up as they go along. The Banking Department still adhered to the operating principles of the fixed-parity-value gold standard system. For example, if the pound’s value was a little high compared to other gold-linked foreign currencies, or compared to gold bullion, the Banking Department would purchase bonds, thus increasing the monetary base and depressing the value of the pound. If the pound’s value was a little low compared to other gold-linked currencies or gold bullion, the Banking Department would sell corporate or government bonds, thus shrinking the monetary base. Despite the use of the Discount Rate, they did not try to “manage interest rates” in the manner of Keynesian floating fiat policy boards today. Their policy target was the stable value of the pound vs. gold. However, they had a little discretion as to how this would be accomplished. If they goofed for some reason, and the pound’s value deviated from its official parity by a larger degree, people could still go to the Issue Department and trade their pounds for gold, or vice versa. So, there was a safety system in place in case the Banking Department managers messed up. That is why John Stuart Mill always recommended that convertibility (the ability to trade banknotes and bullion at the Issue Department) was an essential part of a gold standard system, for political reasons if not necessarily technical ones.

The Banking Department could also adjust its deposits (and thus the monetary base) via changes in its aggregate lending (i.e. “notes”). This reduction in lending could take place on a loan-by-loan basis — loans would simply be refused or not rolled over — or it could take place accompanied by an adjustment in the Discount Rate, which was the Banking Department’s official lending rate. If the Discount Rate was higher than other competing commercial banks, then people would tend not to borrow from the Bank of England, and existing lending would naturally mature and be paid back (most of this lending was likely short-term in nature). If the Discount Rate was lower than competing commercial banks, people would tend to borrow from the Bank of England and lending would expand.

As we can see, most of the short-term variation in base money came from the Banking Department’s open-market operations.

As might be expected, changes in lending are somewhat smooth and slow-moving. The loan book either expands or contracts bit-by-bit, as individual loans are either made or mature. However, it was easy to change the monetary base more quickly with open market operations in government and other types of bonds. This is one reason why the BoE, by this time, had transitioned mostly to open-market operations as a way of managing the monetary base. It was quicker and more direct, especially for the short term. Also, the Bank of England probably didn’t want to jigger its Discount Rate too often. During this time period, the Discount Rate looked like this: 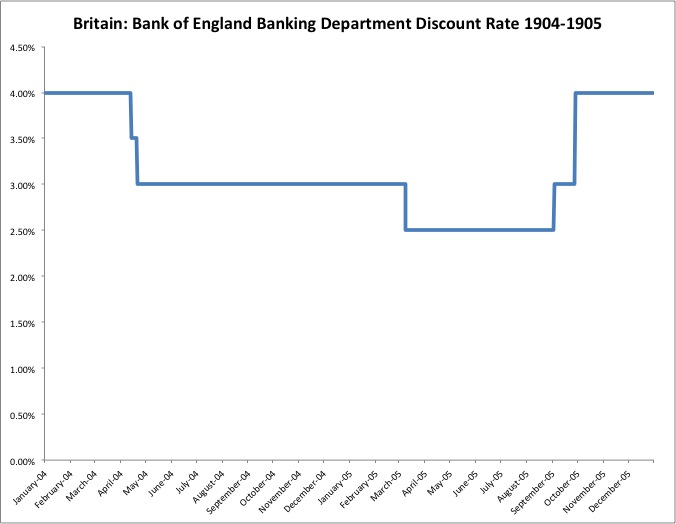 When the Banking Department sold a bond, or when one of its loans matured, the buyer would of course have to make a payment to the Bank of England. The Bank of England would accept only two means of payment: either banknotes, or deposits at the BoE. The deposits would likely be held by some other British commercial bank. Thus, if you were a private buyer of a bond the BoE was selling, you would ask your commercial bank to pay the BoE. The commercial bank would have a deposit at the BoE (essentially the commercial bank’s bank account), which would be debited by the amount of the payment. Thus, that commercial bank’s deposits would be reduced, and aggregate deposits would also be reduced. You can see how the discretionary open-market operations of the Banking Department, in other words purchases and sales of government and other bonds (corporate etc.), would lead directly to changes in deposits at the BoE and thus base money.

In the case of payment by banknotes, of course the banknotes in circulation would decline. The Banking Department could either hold these banknotes in its vault, or go to the Issue Department and trade them for gold bullion.

In the case of a normal bond sale, between two private parties, Buyer A buys a bond from Seller B. Buyer A’s bank, Bank A, pays for the bond using its deposits at the Bank of England. Bank A’s deposit decreases by the amount of the bond sale, and Bank B’s deposits at the BoE increase by the amount of the bond sale. Bank B then credits Seller B’s account at Bank B for the proceeds of the sale. You can see that the aggregate deposits at the BoE don’t change in this case. Only open market operations, or sales and purchases of bonds, by the Banking Department leads to changes in the monetary base. (Essentially the same process applies to direct lending.) 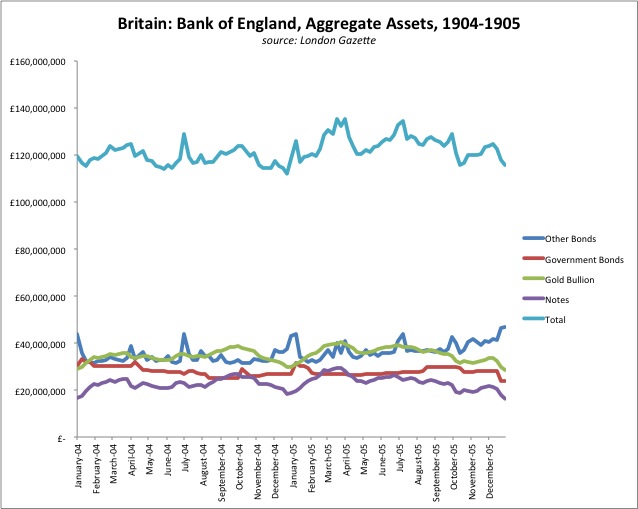 If we aggregate both the assets of the Issue Department and Banking Department, typical of central banks today which do not have two departments, it looks like this.

At any time, a commercial bank with a deposit at the Bank of England could ask for a withdrawal in the form of banknotes. In this case, if the Bank of England did not have the banknotes on hand, it would have to get them from the Issue Department. The Bank of England would sell one of its assets (for example a government bond) and use the proceeds of the sale to buy gold bullion on the open market. It would then take the gold bullion to the Issue Department and trade it for banknotes. Then it would deliver the banknotes to the commercial bank. Let’s say the withdrawal was for £1m. Deposits would decline by £1m. BoE assets (a bond) would decline by £1m. Issue Department assets would increase by £1m in gold bullion, and banknotes in circulation would increase by £1m. Thus, deposits would decline by £1m and banknotes in circulation would increase by £1m. Total base money (banknotes plus deposits) would be unchanged, but the composition would change.

Thus, although the Issue Department and the Banking Department were in a sense two different systems working in parallel, in practice they were tied together. Today, central banks do much the same thing, but without the separation of departments.

If you have a good understanding of how the Bank of England worked, including both the Issue and Banking Departments, compare now to how the Federal Reserve worked in the 1920s. You will find it was much the same. This is no surprise: the Bank of England’s example was widely imitated throughout the world.