A friend asked me about changes in the Bank of England’s balance sheet as it suspended gold redeemability in 1914, and then returned the pound to its prewar gold parity in 1925. I decided to look it up. 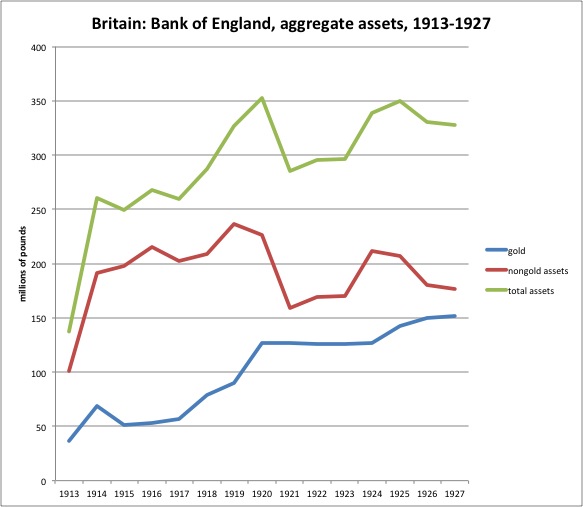 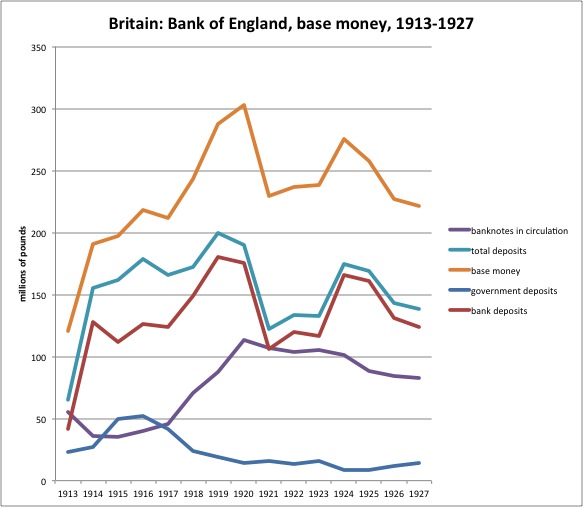 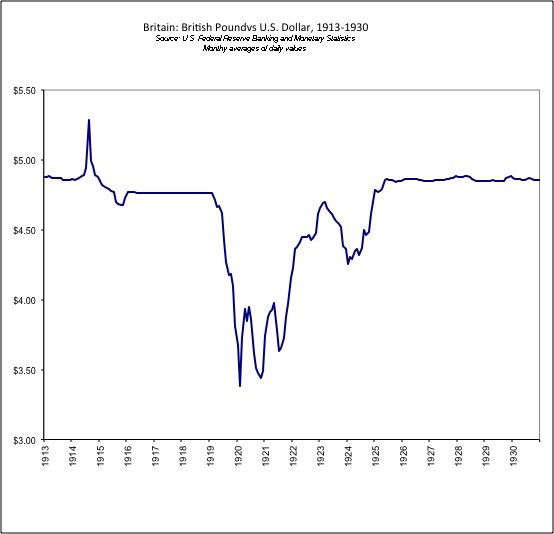 This data is for year-end, except for 1913, which is for February 1913. The source of the data from 1914 is the Federal Reserve Banking and Monetary Statistics. The 1913 data comes from the London Gazette.

We see a rather large jump in base money in 1914, mostly in the form of bank deposits at the BoE. This makes perfect sense; banks would want to hold more “cash” under such dramatic conditions. However, gold redeemability was suspended, so you could also look at it as some effort by the BoE to monetize government debt, leading to greater bank deposits. It looks like a little of both; the GBPUSD forex rate, as recorded, shows a small decline in the forex value of the pound vs. the dollar by the end of 1914, but not at all proportionate to the increase in base money.

The BoE expanded the monetary base considerably during WWI, in part to help finance the government. This led to a decline in the pound’s value vs gold. However, we don’t have good statistics from that time as to how much the pound declined vs. gold. All that I have is the above information about GBPUSD forex rates. However, these rates were fixed with capital controls during the wartime period, with the controls obviously lifted after the war’s end, in 1919. Also, the dollar itself was not pegged to gold during the 1916-1921 period. Mirroring action by the BoE, as the U.S. entered the war in April 1917, capital controls and a gold embargo were imposed, thus effectively halting U.S. dollar gold redeemability. The Fed was pressured into helping to finance the U.S. war effort, with identical results (a falling dollar value vs. gold) as happened in Britain. Unfortunately, due to the wartime gold embargo and capital controls, I don’t have good data as to how far the dollar’s value fell vs. gold. My data just shows the “official price,” of $20.67/oz. I am sure that, somewhere, in Shanghai, Singapore or Tangiers perhaps, people were actively selling dollars, pounds and gold bullion, in a free market at prices different than the official price. However, I don’t have such data.

The U.S. dollar’s weakness vs. gold was not fully resolved until early 1922.

Thus, to some degree, the GBPUSD rate doesn’t really reflect the gold value of the GBP until about the beginning of 1922. As wartime capital controls were lifted and conditions normalized in the 1920-1922 period, the BoE contracted the monetary base considerably during 1921, just as the Fed did. By early 1922, most of the return of the GBP to its prewar gold parity was complete. The pound returned to its prewar parity in 1925, as the BoE contracted the monetary base again during that year. There is a further contraction in base money 1926 and 1927, which is not particularly important as the pound was on a gold standard system during that time. The pound’s value didn’t change, and thus there would be no particular economic effects. I would guess that was driven by commercial banks normalizing their BoE deposit holdings, reducing them in light of stabilized conditions worldwide and the reinstatement of the gold standard system in Britain.