Here’s something you don’t see every day: the Bank of Japan’s balance sheet 1928-1933, a period that includes the BOJ going back to gold in January 1930, and then devaluing in December 1931. This should not be considered the entire balance sheet, but at least it illuminates some of the most relevant items. The source is here:

Here’s what the yen was doing vs. gold in those days: 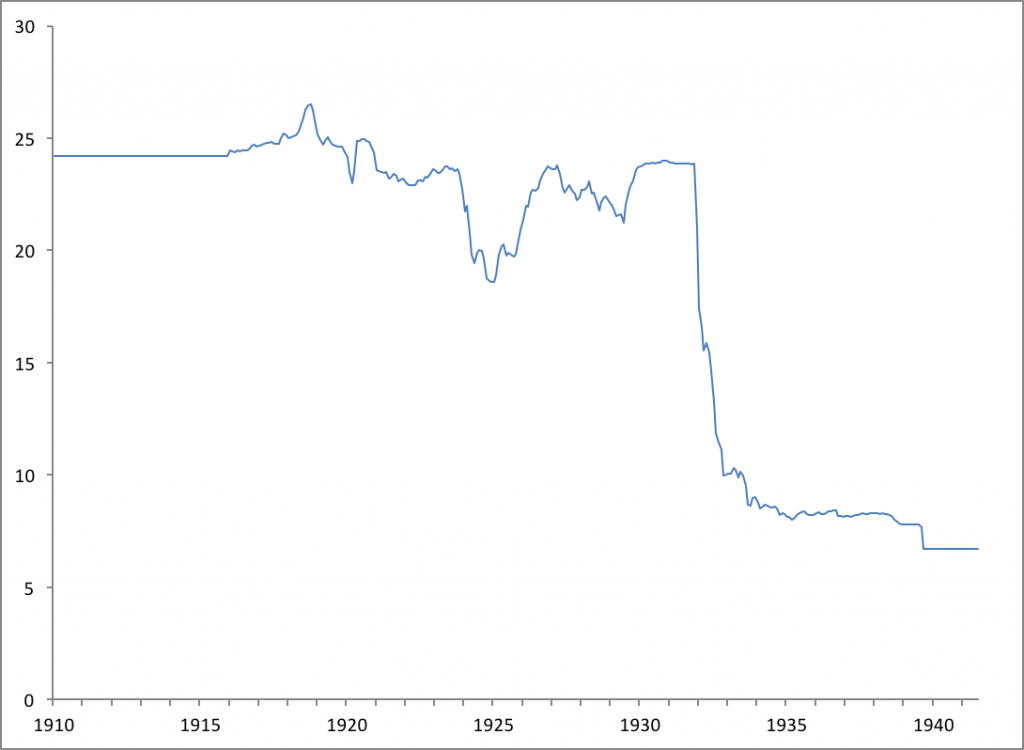 As we can see, the yen, like all major currencies, left gold during World War I. There was some effort to return to gold in the 1920s, along with many other countries worldwide. It looks like the yen was quite close to its prewar parity in 1923, which would have made an official resumption easy, but the yen took a dive probably in reaction to the disastrous Kanto (Tokyo) Earthquake that year. Further attempts at resumption were frustrated by economic weakness (high taxes) and also a financial crisis in 1927, which certainly may have been influenced by the big rise in the yen vs. gold in 1925-1927, which itself was probably related to the process of going back to gold. I don’t want to ascribe that entirely to monetary factors, however, as there was a lot going on in those days.

Anyway, the yen floated for the remainder of the 1920s, but it did not float very far. It was, on average, only about 5% below its prewar parity. Finally, in 1929 there was a push to properly reinstate the gold standard, which required a little rise in the yen to return to the prewar parity. This was accomplished in January 1930. This was rather bad timing, as this followed the stock crash of 1929 by only a few months, and was generally contrary to the notions of the time. However, I think that today too much emphasis is given to negative effects of the yen rise and return to gold. It looks like a relatively minor factor. Against this we can put the advantages of reliable fixed exchange rates. 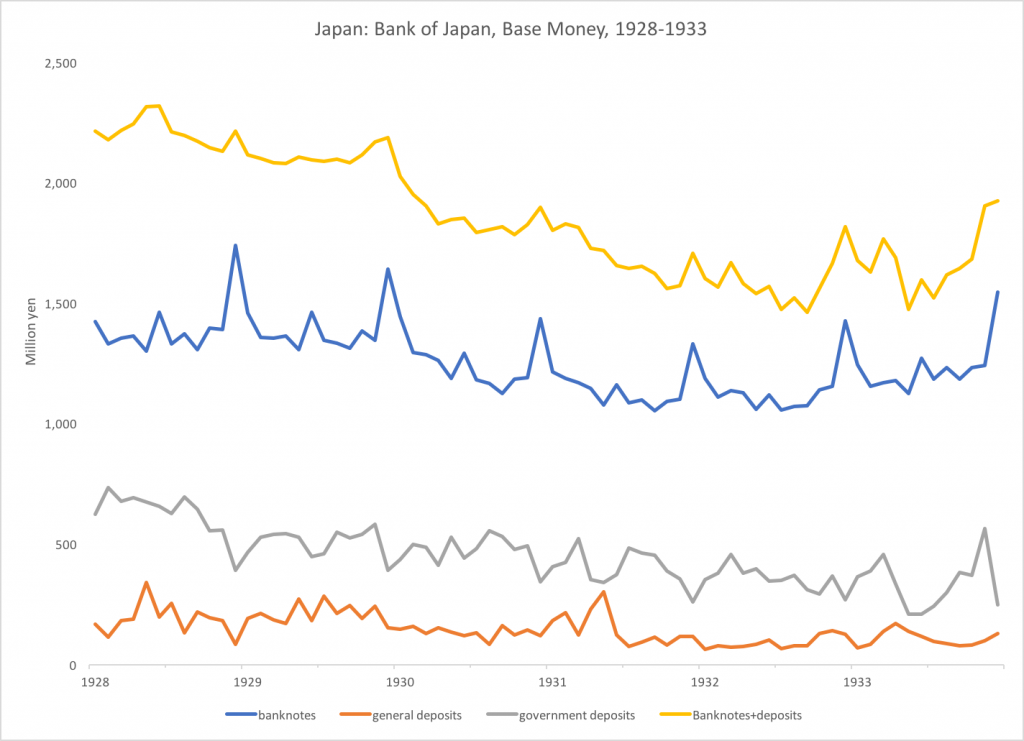 As we can see, there was a decline in base money beginning in January 1930, related to the return to gold. Basically, the government just allowed the conversion of gold at the prewar parity, which produced gold outflows until the decline in base money pushed the real value of the yen to the gold parity. It was not such a big deal. After the initial drop in base money, it levels off for a while. 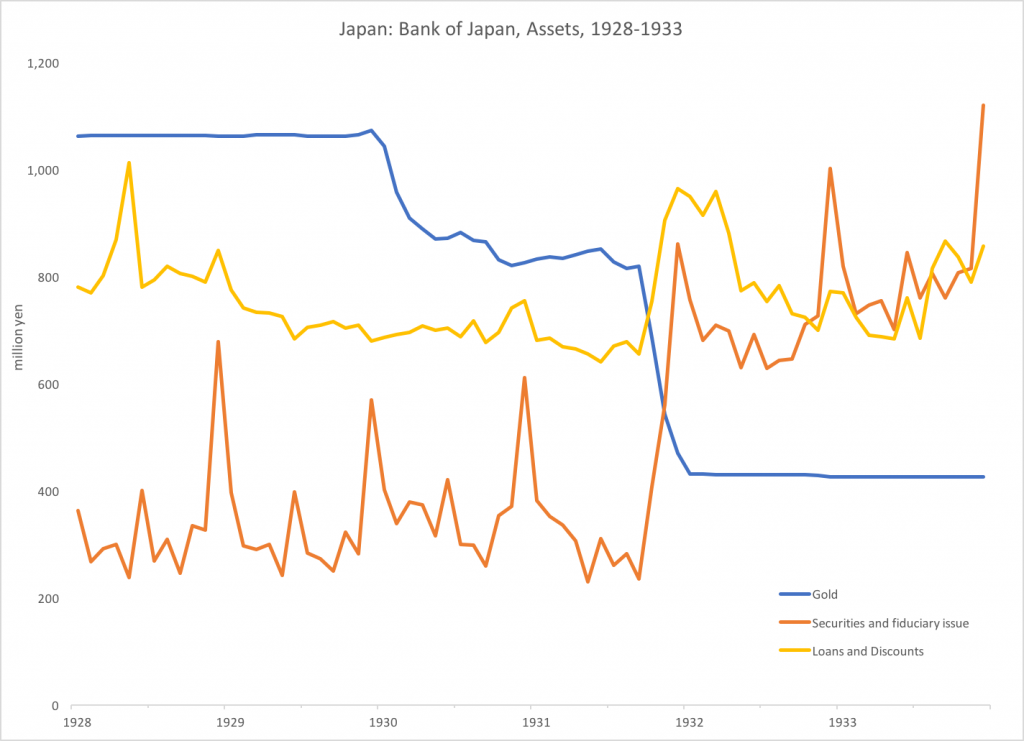 The initial drop in base money was entirely accomplished with gold outflows. If the BOJ had instead cut back on its loans and discounts (yellow), then no gold outflow would have been necessary; or, at least, a later reduction in loans and discounts would have allowed gold inflows and a rebuilding of gold reserves, if that was desired. (In fact there was a little reduction in discounts in 1931, which allowed a modest increase in gold even though base money continued to fall.) After the first big gold outflow, there was a steady dribble lower but it is not such a big deal. Historians talk about chronic gold outflows during this period like it was some kind of continuing crisis, but it looks to me like the normal operations of a gold standard system, with no great problems until the end of 1931.

September 1931 was a big month for Japan. On September 18, the Japanese military in Manchuria attacked a Chinese railroad, effectively starting a war with China without the permission of the civilian government. On September 21, Britain devalued, along with a host of other countries, raising fears of a devaluation in Japan. The political system was thrown into turmoil. A plan for a coup d’état by young army officers was revealed — there had already been an attempted military coup in March 1931. (Base money began to turn downward from this point, suggesting capital flight.) The cabinet of the ruling party suddenly collapsed in December 1931 (some suspected this was organized by large speculators betting on a devaluation), and a new government was formed, which included a new finance minister, Korekiyo Takahashi. Japan devalued in December 1931, immediately after the formation of the new cabinet. The yen collapsed to about a third of its prior value, compared to gold, contributing to the monetary chaos of the time, and constituting an effective default on yen-denominated debt.

As we can see, there was some funny business in October-December 1931 regarding big increases in “securities and fiduciary issue,” which amounts to a “loan” (printing money for) the government. The increase in this category was offset by gold outflows, leaving base money relatively stable. As is common in these matters (and was also true for the British devaluation in 1931 and the U.S. devaluation in 1933), the decline in currency value was essentially a reflection of decreased demand due to the currency’s unreliability, rather than an increase in supply. 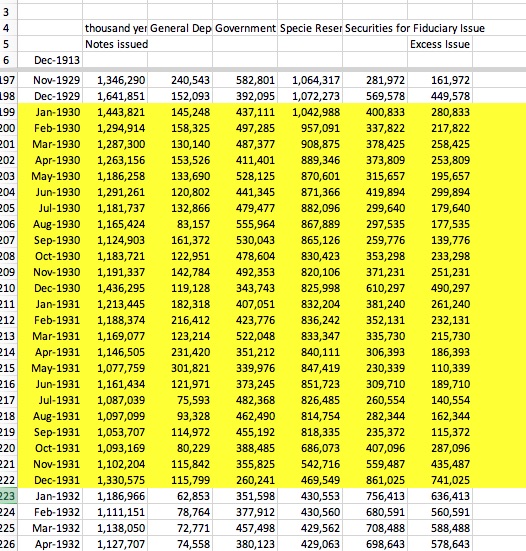 This has some interesting implications, because it was in effect the Minseito Cabinet that was “printing money for the government,” not the Seiyukai Cabinet which entered in December 1931. Whether the Seiyukai Cabinet (including Finance Minister Korekiyo Takahashi) continued this practice to the end of December 1931 is unclear. It is possible that he actually put a halt to it. (There is also a seasonal pattern in “fiduciary excess issue”.) In any case, this item for December 1931 was up 250 million yen from December 1930; and it was up 230 million yen in February 1932, so it appears that the effective increase was about 250 million yen.