I noticed some interesting things regarding the end of the “bull market in gold” (dollar devaluation episode) of the 1970s that I thought were worth passing on. 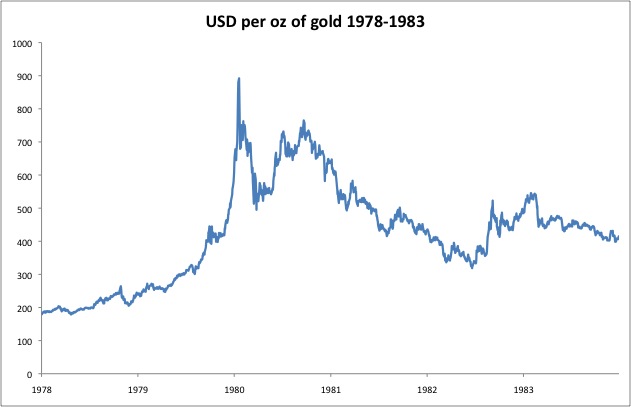 Here’s a chart of the Fed Funds rate of that time. Remember, the Fed didn’t have a Fed Funds rate target in those days, at least in the late 1979-1982 period. They were busy with the Monetarist Experiment. 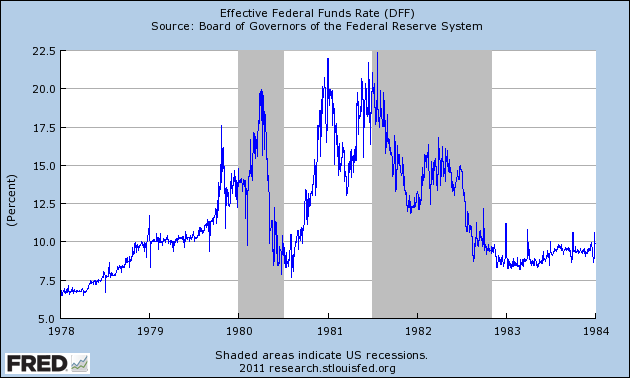 One thing that the high interest rate showed was that the Fed was willing to do something apparently economically destructive in order to support the dollar’s value. For many years, the Fed had a policy of “accomodation,” which is to say that they would keep policy relatively easy to avoid recession. The result was the gradual, and then not-so-gradual decline of the dollar’s value. 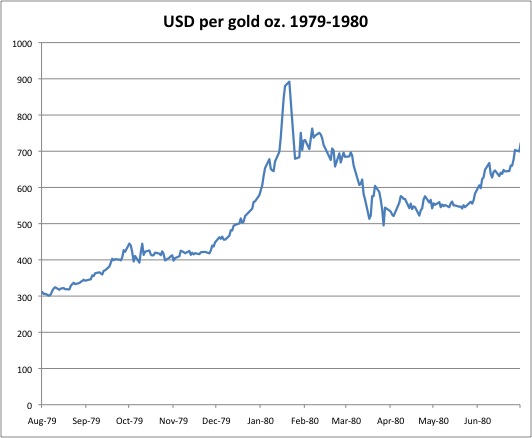 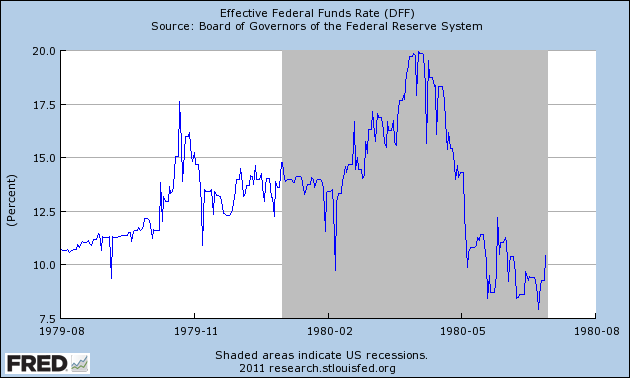 This sort of thing no doubt added to the “Volcker Myth” that very high interest rates and a recession were necessary to stop the inflation. In practice, nothing of the sort is necessary. What if, instead of fooling around with this sort of seat-of-the-pants Monetarism, a gold standard policy was announced? In that case, interest rates might fall quickly, because it is wonderful to get paid 15%+ in a gold-linked currency. The lower interest rates and stable currency would cause the economy to boom.

Here’s a look at the “real Fed Funds rate” during that time: 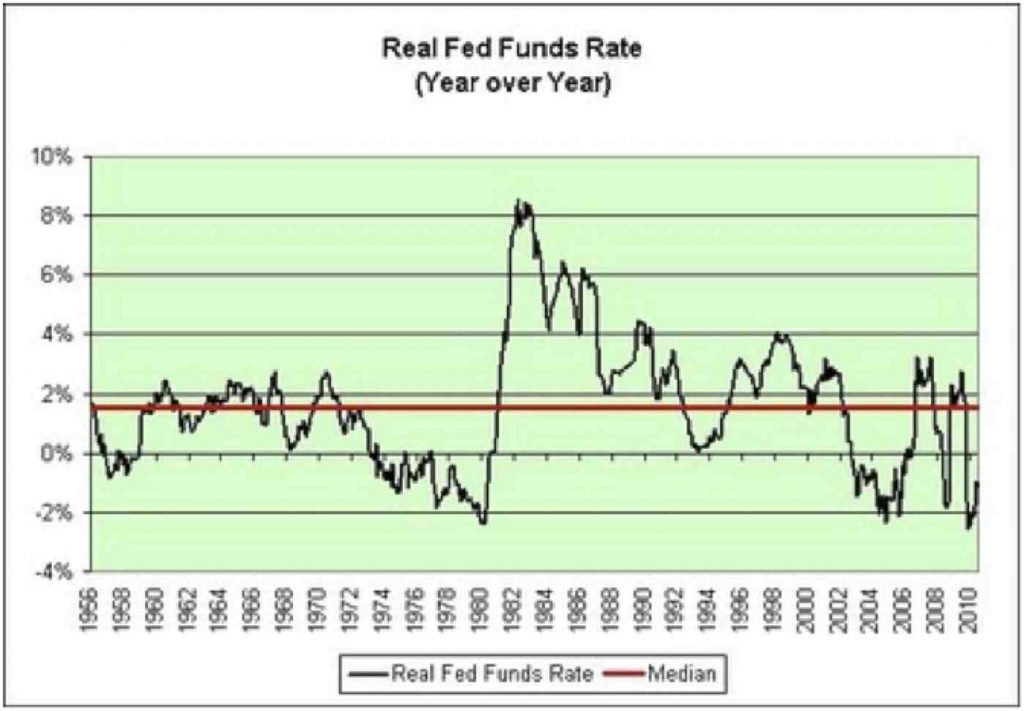 You can see the big change that the Volcker move to higher rates signified. You can also see how the Fed had a tendency to have a “negative real Fed Funds rate” during the late 1970s. This is the “accomodation” policy. The Fed Funds rate was rising during the time, but so was the CPI so the “real” number came out negative. 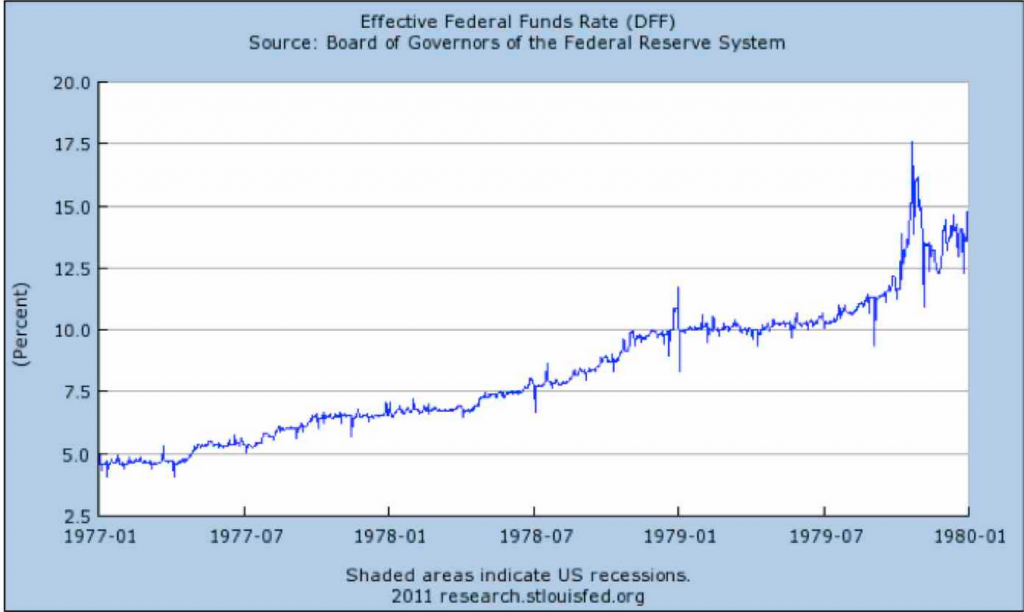 Today, of course, the Fed has a deeply negative “real” Fed Funds rate. But, this compares to the official CPI, which has been so badly abused that nobody takes it very seriously today. Shadow Government Statistics shows what the CPI would look like today if it was computed the same way it was in 1980:

This data is why I expect the present devaluation episode of the U.S. dollar to continue probably until a) “real interest rates” are strongly positive; b) the Fed abandons all “accomodative” tendencies to support the value of the currency, even if this has consequences thought to be bad for the economy at the time; or c) we get a gold standard system.

Obviously, we are a long way from any of these conditions today. There are some alternative outcomes, along the lines of the Asian central banks around 1998, who supported their currencies through what amounted to a sort of open-ended quantity framework. In that case, interest rates fell instead of rising.

I also have here a nice chart of the devaluation of the Continental Dollar in the 1770s and early 1780s. It was this experience that convinced the Founding Fathers that gold and silver would be mandated as money in the U.S. Constitution of 1789. 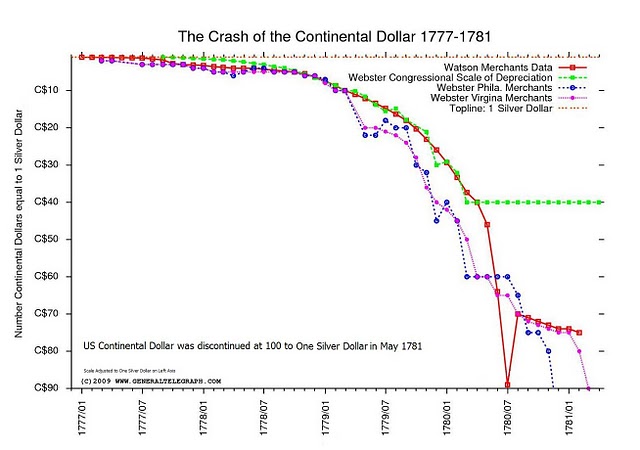