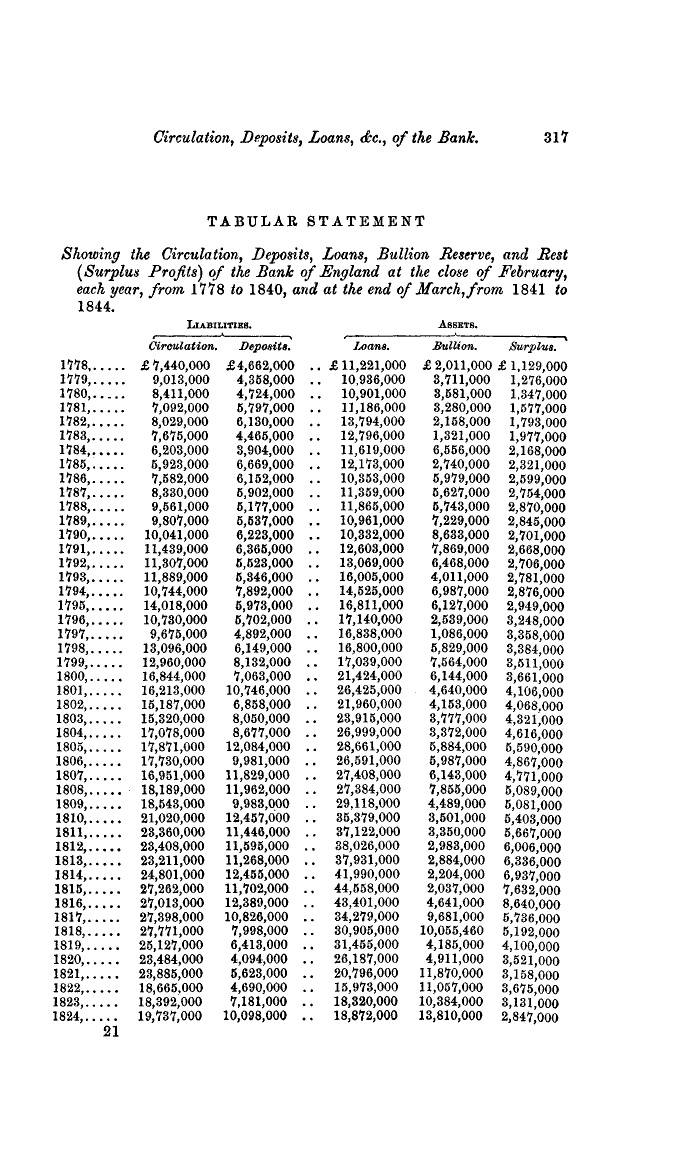 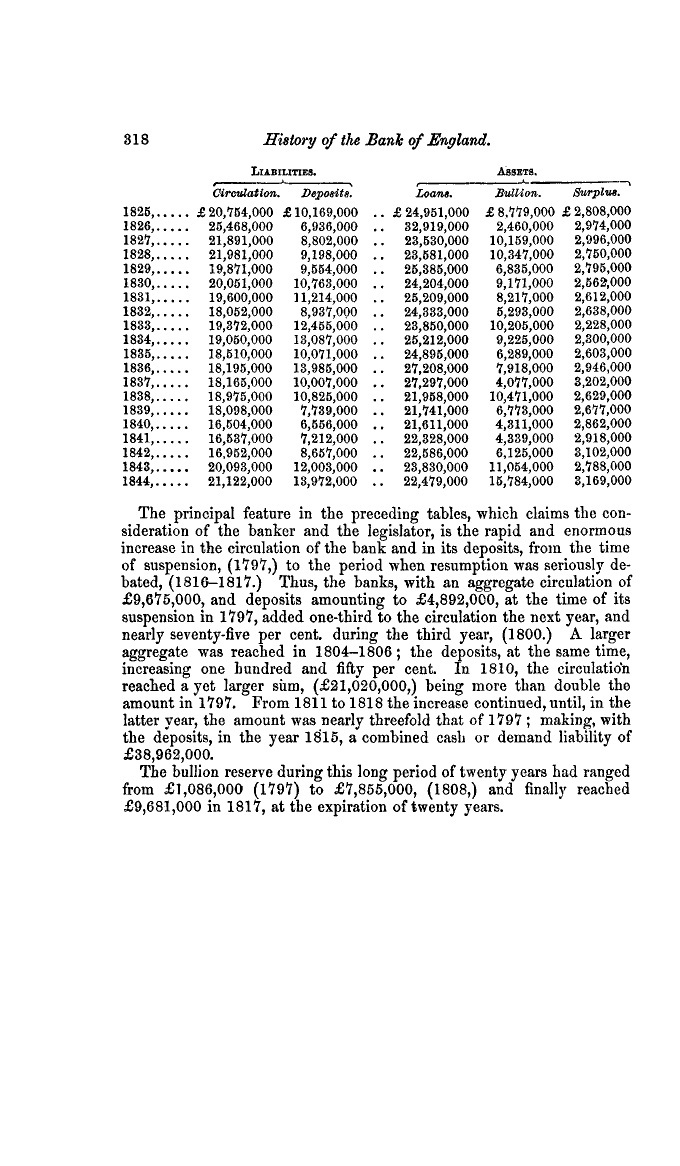 Here’s what it looks like. Unlike the U.S. example, where there were literally thousands of banks issuing banknotes, in Britain the Bank of England had a monopoly on banknote issuance. So, this represents the entire paper currency circulation. Once again, you can see a few things here:

1) There was never any “100% reserve.” The “reserve ratio” (bullion to banknotes ratio) varies wildly during this time.
2) Banknotes outstanding did not follow any “2% per year” curve related to gold mining, etc.
3) I don’t have info on imports and exports of gold here, or “current accounts” data, but if I did you would see that there is no relation there either. 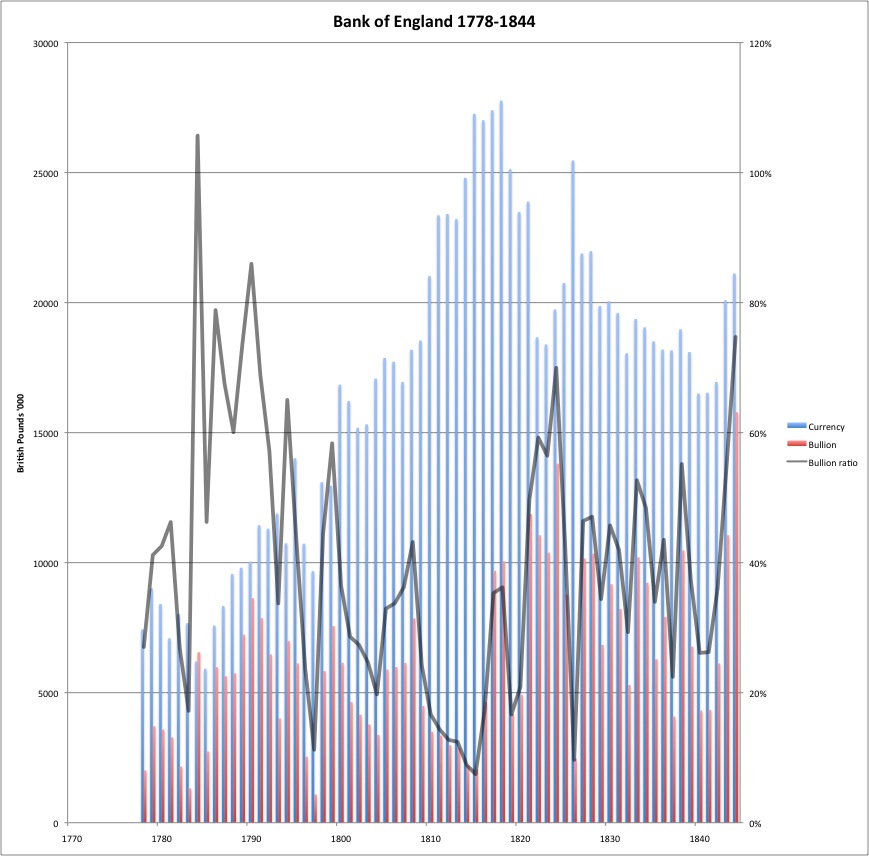 Here’s a description of the floating of the pound in the years 1797-1821, showing the price of gold in pounds, and the implied devaluation of the currency in percent. (Yes, this is exactly how people thought of it in those days. Which is exactly the same way as I think of it today.) 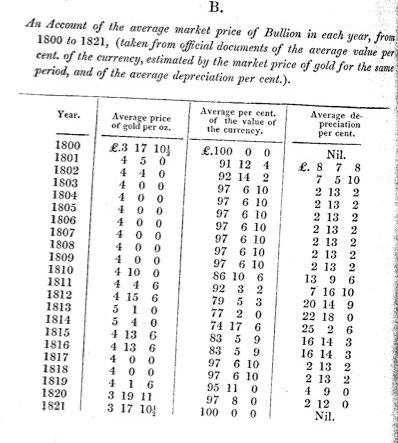 As you can imagine, there was a lot of discussion about how to put the pound back on the gold standard. David Ricardo, a retired financial speculator, began to write about this topic. He was later regarded as one of the greatest economists of the 19th century. Here is his first 1807 pamphlet, The High Price of Bullion, Proof of the Depreciation of Banknotes.

The High Price of Bullion, Proof of the Depreciation of Banknotes

Particularly after Napoleon’s defeat at Waterloo in 1815, which ended the Napoleonic Wars, an effort was made to return the pound back to its prewar parity at £3 17s 10.5d. (That’s three pounds, seventeen shillings, 10.5 pence. There were twenty shillings to a pound, and twelve pence to a shilling.)

Here’s David Ricardo on the topic:
It is on this principle that paper money circulates: the whole charge for paper money may be considered as seignorage. Though it has no intrinsic value, yet, by limiting its quantity, its value in exchange is as great as an equal denomination of [gold] coin, or of bullion in that coin …

It will be seen that it is not necessary that paper money should be payable in specie to secure its value; it is only necessary that its quantity should be regulated according to the value of the metal which is declared to be the standard.
Principles of Political Economy and Taxation, 1821