In the U.S., most people are partisans. They are either Republicans or Democrats. They see everything the Republican Way, or the Democratic Way. They might even switch sides at some point, but often they remain partisans. This is something innate: they learned, or it was burned into their DNA over generations, that it is often good to join a large, dominant group. Once they are part of a group, it is usually best to follow the precepts of the group — all of them, whatever they may be, no matter how stupid or nonsensical they are. If you don’t, you might be expelled from the group, or burned at the stake as a heretic. The easiest wy to follow these precepts is to genuinely internalize them, rather than just faking it. They really can’t deviate from the groupthink. Of course they think they can … but they can’t. Or, at least, they never do. They never want to. This doesn’t seem to have much correlation with education. There are some people with little education, who are nevertheless free thinkers. They might not quote Descartes, but they say: “both ‘dem Republicans and Democrats are screwing us silly. They’re both a bunch of sleazy liars.” Which is neither the Republican Way or the Democratic Way. In fact, I would say that highly educated people tend to be more prone to groupthink, because they have more to lose. Plus, most undergraduate and graduate education in the U.S. is training in academic groupthink. You can generally identify an independent thinker this way: they should be able to name three good things and three bad things about any political party. Even the Nazi Party (which did win a large portion of the German vote). Statistically, political analysts say that roughly 65% of the U.S. population is partisan, and about 35% are independent.

You are one of those independent types, right? Yeah, sure you are. However, even somewhat who is inherently an independent thinker tends to have their views clouded by the present political and intellectual situation in the country at the time. For example, George Bush Jr. lowered the top income tax in the U.S. from 39.6% to 35%. This was coupled with some significant cuts in capital gains and dividends, and even the elimination of the inheritance tax, but the income tax rates gained an inordinate amount of the overall attention. I hardly noticed any discussion about the inheritance tax, oddly enough, although that was by far the most dramatic change. This 4.6 percentage point drop in the top income tax rate was supposedly the “largest tax cut in history,” according to its proponents. Its opponents said the same thing.

If you were either a partisan Republican or Democrat, you probably thought — along with the groupthink — that this was the largest tax cut in history. Even if you were an independent, you probably were thinking a similar thing, because everyone else was saying so.

But someone with an international viewpoint could easily see that it was a minor twiddle. In 2004, four governments adopted a “flat tax” with a low top income tax rate. Bosnia and Herzegovina replaed their existing income tax system, with a 30% top rate, with a 10% flat tax. That’s a ten percent top income tax rate! Wow! Slovakia replaced their old tax system (38% top rate) with a 19% flat tax. Ukraine’s flat tax (15%) replaced a system with a 40% top rate. Iraq also implemented a 15% flat tax, although that was something of an oddity.

Those are some big tax changes. If you had the internationl viewpoint, you would know about these things. Sometimes governments — and the societies they reflect — are static and hidebound. At other times, they are dynamic and accept huge changes as a matter of course.

At the same time, much of developed Europe was lowering corporate taxes steadily. In the U.S., the official corporate tax rate (35%) has remained unchanged for decades, like it was some sort of law of physics. Europe was having a completely different discussion. Hey, we can change this stuff! So maybe we should!

To take another example: in the U.S. we talk a little bit about a high-speed passenger rail network. Maybe, in ten or twenty years, someone will build a little teeny something somewhere. The Chinese government, however, has a completely different way of looking at things. For them, high-speed rail is simply a necessity of modern life, along with electricity and good sewage systems. Just like France, Japan, or Taiwan. This is especially true given the possibility of increasing unavailability of oil in the future. So they just build it. China plans to build 70,000 miles of new track over the next ten years, on top of their existing rail network. 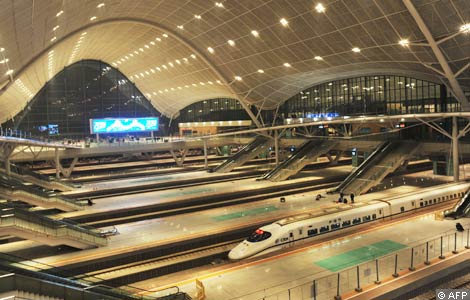 Chinese workers put the final touch on the interior of a new Railway Station in Wuhan, central China’s Hubei province on December 24, 2009. China plans to build 42 high-speed railway lines by 2012 in a massive system overhaul that is part of efforts to spur economic growth amid the global downturn, state media have reported. CHINA OUT AFP PHOTO (Photo credit should read STR/AFP/Getty Images)

See what I mean? Some nations just talk about stuff, like it was a distant fantasy. Others just do it, never imagining that it could be a problem. Totally different political and intellectual situtions. Both within the realm of human possibility.

I’ll take one last example, regarding health care. In the U.S., we are stuck in a late-19th century/mid-20th century formula of “free market conservatives” and “big government liberals.” In the U.S., a universal health care system is imagined to mean much higher taxes, much bigger government, regulation, bloat and waste. Ugh. However, no universal health system means that tens of millions of people are neglected basic care, and the rest suffer under an incredibly expensive for-profit private system. Two pretty bad alternatives.

However, I noted that Hong Kong has a completely different way of doing things. Hong Kong remains today one of the most pro-business, libertarian places on the planet, with its rock-bottom tax rates and principle of stable money, in the form of a U.S. dollar currency board. However, it also has a government-operated universal health care system — which is also super-cheap, costing the government a mere 3% of GDP!

Hong Kong isn’t locked in some intellectual dead-end, discussing whether we should have “huge, bloated government/universal healthcare” vs. “slim, probusiness government/fend for yourself with the predatory private health system” discussion for generations on end. They just established a solution, in fact one of the best in the world, without suffering some sort of ideological short-circuit.

If you don’t have the international viewpoint, you tend to see things in the form of “right” or “wrong.” The Republicans are right, and the Democrats are wrong. Or vice versa. With the international viewpoint, you see that most all governments, and policy debates, are basically stupid … but some are more stupid than others. It is just the endless grind of human stupidity, year after year. However, sometimes a country manages to be less-stupid for long enough to rack up some decent successes. China seems to be on this track now, but I can already see that their decision to imitate U.S.-style 20th century Hypertrophism (huge buildings, huge streets, lots of Green Space, too many cars) which has already been proven to be a failure will create intense problems for the next four or five generations of Chinese, especially since the inherent problems of this format are exacerbated by China’s limited land and large population.