We have something special this week: the open market value of silver, compared to gold, over a period of over three centuries. The location is London.

For a long time, silver and gold were, in a sense, two versions of the same thing, just like one dollar bills and twenty dollar bills are today. Their ratio of value was not perfectly stable, like the 20:1 ratio of $1 bills and $20 bills, but it was quite stable between about 16:1 and 15:1. Both silver and gold served as metallic money side-by-side, with silver used for small scale transactions and gold for larger. You couldn’t use just gold, because you can only make a gold coin so small. Even a tenth-ounce gold coin, which is a very small coin, would have a value today of about $160. Remember that people were poorer then too. Just as $160 is “a lot more money” in El Salvador today than the same $160 in San Francisco, compared to prices and wages and so forth, a tenth-ounce gold coin was “a lot more money” in those pre-industrial days than it is today for us living in the U.S.

This 15:1 or 16:1 silver:gold ratio goes waaaay back, to Roman times and before.

Even a tenth-ounce silver coin (roughly the U.S. silver dime) was quite valuable in those days, worth about $10 in today’s money. ($160 for a tenth-ounce gold coin and a 16:1 silver:gold ratio works out to $10.) Thus, we move on to copper coins.

Over time, particularly in the 1870s, banknotes, token coins and bank deposits replaced silver for small-scale use. You didn’t need silver dollars anymore, because you had a $1 paper dollar bill, and you could redeem $20 of these paper banknotes for a gold coin containing nearly one ounce of gold. Silver was “demonetized” in the 1870s. This was apparently something that humans just did collectively. Governments had to follow along, with official policy catching up to market reality. This was true even though some large countries, notably India and China, remained on silver-only monetary systems up through the early 20th century. Humans have always wanted their money to be as definite as possible, so when “bimetallism” was no longer needed for practical reasons, it was dropped. Silver coins still existed, but they had become “token coins,” just like our coins today, whose value is related to their exchangeability for paper dollars and so forth, not the market value of contained metals.

Because of the “demonetization of silver” in the 1870s, silver is not useful today as the basis of monetary systems, although it was in the past. You would end up with the same problems that China had in the 1870-1940 period.

Note how the “silver bubble” of 1980 barely even shows up on this chart. The “spike” you see is actually in the late 1960s, when silver gained quite a bit of value vs. gold. The reason for this, I think, is that in the U.S. (and perhaps elsewhere), people were not able to own gold bullion. It had been banned in 1933. However, they could see that the U.S. government was on a path toward devaluation and a floating currency, which indeed happened in 1971. You could acquire silver coins like dimes and quarters, a perfect hedge. There was no downside because you would buy the quarter for $0.25 and it would always be worth at least $0.25. No risk! However, there was the upside that the silver quarter would be worth more than $0.25 in the future, which in fact was the case. Because of this, the value of silver rose and the U.S. government discontinued silver coins in 1964. The production cost exceeded $0.25. Apparently the bull market in silver continued a few more years, especially as devaluation loomed. In 1974, it became possible for U.S. citizens to own gold again, so there was less need for silver.

Including minting costs, the cost of production is more than $0.05. Probably, the penny and nickel will be discontinued soon, or the nickel will become a steel/zinc coin. So, you could hoard nickels, and have all the upside of currency debasement with no real downside. However, it is a lot harder to hoard nickels than silver quarters, due to their very small value. Some financial sophisticates have indeed hoarded millions of dollars of nickels, but even for them it is more of a stunt than real investing I think. But, maybe $10,000 of nickels? Could make sense for a small investor. 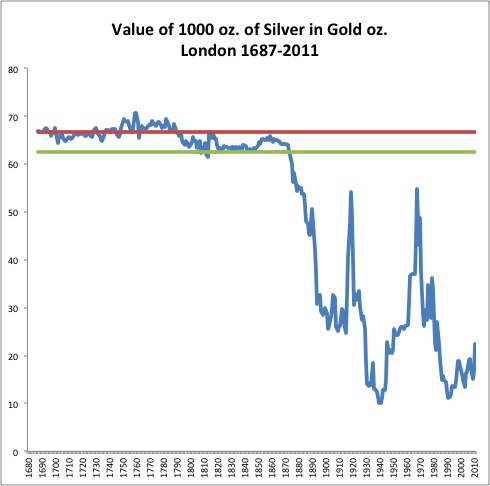