In March 1976, Jude Wanniski penned a rather wonderful op-ed called “Taxes and the Two Santa Claus Theory.” This helped turn around Republican thinking, and is still influential today. Apparently some conservative types have been referencing it recently, and Bruce Bartlett even rescued it from the library archives by typing it in by hand and posting it in its entirety.

The “supply side revolution” was all somewhat theoretical in those days. So what were the results? 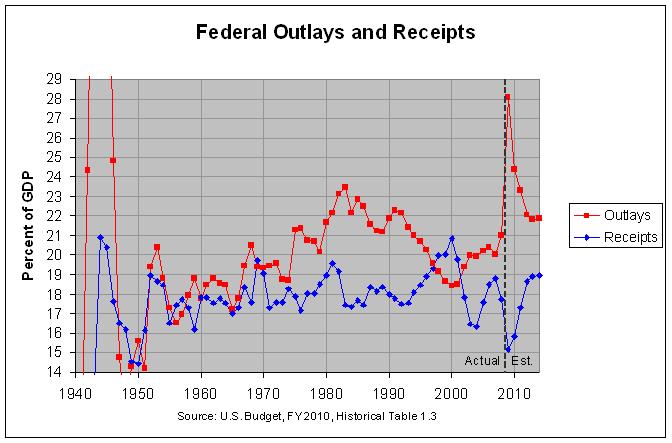 Here is a graph of Federal revenues and expenditures since 1940. As I mentioned previously, the revenues are remarkably flat as a percentage of GDP throughout the postwar period, hovering around 18% of GDP.

There was a little rise around 1980-1981, which was apparently the effect of rampant bracket creep (income tax brackets weren’t adjusted for inflation in those days) at a time when the CPI was rising at over 10% per year. Then, there was a rise into 2000, which was heavily influenced by capital gains-related tax income (note that the capital gains tax was reduced in 1997).

After the Bush tax cuts of 2003, revenue rose right back to its long-term average around 18%, and even rose slightly above to 19%.

It appears that revenue, as a percent of GDP, is about the most predictable thing you’ll ever find in economics. Note that the future projections of revenue past 2010 show a return to 19%.

Now how about that red line? That’s expenditures. Expenditures rose steadily from 1950 to 1990, and during the 1980s averaged about 22% of GDP. If you have a ten-year-old around, you can ask him or her what happens when your revenues are 18% of GDP on average and your expenditures are 22% of GDP on average. Do you think that might lead to a budget deficit of 4% of GDP, on average? If your ten-year-old came to this conclusion, they probably already know more about what happened in those years than your typical Nobel-Prize-winning newspaper columnist.

Congress sets the budget for the most part, and Democrats controlled Congress in the 1980s, as they had since the 1950s. Of course, Democrats like to spend money on all their social programs, and also their “economic” programs which usually amount to “more government jobs.” Republicans have their spending-reduction wing, but the party as a whole also has a lot of people eager to spend money on military adventures, pork, thickly padded government contracts handed out to cronies, and of course the occasional bank bailout. (There were a lot of bank bailouts going on in the 1980s due to their huge losses on Latin American debt.)

Spending declined in the 1990s, at first because of the reduction of military spending after 1990. Republicans took control of Congress in 1994, with Newt Gingrich and his spending-reduction fixation. I think the reduction in spending during that time can also be traced in part to the general economic success of that period, which tends to lead to fewer demands on government for welfare or counter-recession-type spending. In a healthy economy the political balance shifts slightly, so the ever-present spending-reduction wing gains enough of an advantage on the ever-present spending-increase wing that the government as a whole reduces its outlays somewhat. Combined with the rise in tax revenues in the late 1990s, the result was a momentary surplus.

Indeed, I would say that there is a trend toward higher government spending (as a percent of GDP) that begins right about 1965, and peaks right around 1982. Then there is a trend toward lower spending that begins around 1982 and ends around 2000. This coincides exactly with the major bear/bull markets of the time. This is another reason for a growth-enhancing, tax cut strategy — it is politically easier to cut spending. Margaret Thatcher did a lot to shrink down the U.K. socialist state, but she started with a big tax cut.

What did reduced taxes do for the economy? I think you would have to tie yourself into an intellectual pretzel to argue that Reagan’s tax cuts were bad for the economy. That leaves you with a) no effect, or b) a healthier, expanding economy.

Sometimes, the correct answer is a) no effect. There is always some politician who has some corny little tax cut plan — like increasing the per-child tax deduction by $200 — and they want to claim that this irrelevant little nothing is going to produce some kind of world-changing result. You saw this in the discussion around the 2003 Bush tax cut for example. The reductions in capital gains and dividend taxation were significant, but the change in income tax rates was rather minor. The top rate fell from 38.6% to 35%. Ummmm … whoop de doo. And yet, advocates and critics of the plan both called it the “largest tax cut in history.”

Reagan cut the top income tax rate from 70% to 28%. Now that is a tax cut. It is certainly not the kind of meaningless twiddle that has no effect. That leaves us with b) a healthier, expanding economy, which translates into higher GDP. Certainly, that is the message the stock market was giving.

Go get your ten-year-old again. If he or she is getting tired from all this heavy thinking, give them a Snickers bar to recharge their tired brain. Then ask:

If revenues as a percent of GDP are stable, and GDP increases, then what happens to tax revenue?

Admittedly, this is a tough one for a ten year old. And well-nigh impossible for an academic economist.

The answer, of course, is that revenue goes up. The tax cut led to more revenue than would have been the case if taxes were left unchanged.

This is all extremely simple and obvious, which is why I am amused that very few people — I would include a lot of tax-cutting Republicans in this group — seem to grasp it, even twenty or thirty years later.

Here is a typical recent critique of the “supply side revolution” and the “two Santa theory.”

One of the reasons is partisan politics. Someday I will write something about that, but what it amounts to is that if a person doesn’t like a certain aspect of another political group’s ambitions or actions, then they criticize all of that group’s actions.

For example, we could say that Republican leadership in Congress and the executive branch, over the past thirty years, has generally led to:

1) Foreign wars propped up by lies and motivated by the desire to steal resources.
2) Attempts to reduce many government welfare-type programs which are genuinely beneficial.
3) A tendency to encourage/allow increased environmental destruction.
4) An alliance with the Christian conservatives which can have some unpleasant results.
5) Collusion with big business/ultra-rich to loot the taxpayer via vastly bloated government contracts.
6) Deregulation and even encouragement of certain business practices with negative overall results, for example predatory consumer lending.
7) Expansion of the fascist police state, exemplified by the Patriot Act.
8) Economic exploitation of other countries, especially emerging markets, via the IMF and other underhanded tactics (see John Perkins’ Confessions of an Economic Hit Man or Naomi Klein’s Shock Doctrine.)
9) This often leads to or is accompanied by various incursions into national politics, up to and including assassination of political leaders. See for example the various color-coded “Revolutions” throughout the former Soviet states, or the U.S.’s long history of meddling in Latin America:
10) Aggressive attempts to disadvantage U.S. working classes via lax immigration policies and promotion of “outsourcing” to foreign countries.
11) The phony “War on Drugs” (the CIA is the U.S.’s largest drug importer), combined with a vast expansion of the prison-industrial complex, providing a huge resource of prison slave labor for U.S. companies.
12) Bank bailouts and other outright looting on the vastest scale.

You could add a few more I’m sure. The point is, there is a lot to criticize about Republican leadership. Some might argue that it is not really a Republican thing, but rather the goals of a certain oligarch class, who influence and control whichever party is momentarily in power. Democrats have supported the same policies. (The airport at Mena, Arkansas, was a major drug import point while Clinton was governor.) However, I would say that Republican leadership (think Bush and Cheney) have supported these things with a certain enthusiasm and gusto, while Democrats have mostly acquiesced grudgingly.

I don’t have much interest in U.S. politics these days. It is mostly just a chronicle of decline. Just look at the level of discussion regarding these tax issues. Why wade into that swamp of stupidity? Let people suffer the consequences of their action. The real progress is taking place elsewhere, with governments that are able to figure out these simple principles and put them into practice. I’m thinking of Russia, China, Brazil, several FSU countries, and maybe some smaller locales here and there.

I’ll finish here with just a brief clip regarding Greece:

The back of my envelope says that amounts to a 65% marginal tax rate — on income above 12,000 euros! Not to mention property taxes or other local taxes.

Capital gains in Greece are taxed as regular income, but capgains on sales of shares traded in Athens are exempt (what about shares in other countries?). The corporate tax rate is a relatively modest 25%. Dividends and income from ships and shipping (!) are exempt — nice for the oligarchs.

Of course nobody pays these taxes in full. Nobody could. It’s simple Darwinism. If you pay them, you die. The only ones left are the tax evaders.

The most interesting part of the clip is at 8:45. The narrator says:

“These kinds of transitions from public to private employment [if government spending was dramatically reduced] can work, in a low tax, low regulation environment — think of the millions of soldiers returning from the Second World War. But, the Greek economy is crippled by suffocating state controls and crushing taxation.”

Oddly, the narrator leaves it at that, and concludes that Greece and the EU are doomed.

Why are Greeks in the streets? The public employees are of course afraid of being cut off. You’d expect that. But what about the people who aren’t public employees? The IMF/EU/conventional wisdom response is less spending and more taxes. If you were (not) paying these ridiculous taxes, and your government told you the way forward was even higher taxes, what would you think?

You would think that maybe these guys are so dumb that you need to throw a brick to get their attention.

Maybe you thought I was joking when I suggested that the best path for Greece would be a radical reduction in government spending [necessary due to default anyway] plus a radical tax reform, for example using just a 19% VAT with no payroll or income taxes. No, I’m not joking. This is how you deal with these situations.

If the Greek government acted like Ultimate Santa Claus, then the spending reductons would go down a lot easier. The public employees would still complain, but instead of joining them in the streets, the private sector people would say “Shut up, stop complaining, get a job. And by the way, these tax cuts are wonderful. Woo hoo!” Things would calm down, and the economy would boom.