Robert Triffin is another of those characters from the 1960s, whom I generally regard as well-meaning but sorely lacking in technical understanding. This was true across the board in those days, whether Keynesian, Monetarist, “Austrian” or whatever. That’s why I say that the main reason the world gold standard system disappeared in 1971 was not because of any particular inherent flaw in the gold standard system (except for their mismanagement of it), but rather because people didn’t know how it was supposed to work. Also, they didn’t know what it was for, and I include the gold-standard advocates of the time in that characterization. From reading Alan Greenspan’s 1967 paper “Gold and Economic Freedom,” you probably get the impression that the purpose of a gold standard system is to prevent government deficit spending!

Triffin is remembered primarily for “Triffin’s Dilemma,” which we will look at below. Unfortunately, I haven’t had the time to read what Triffin actually wrote, so I can’t really comment on that. Often, what an economist says, and what other people say he said, are different. For example, David Ricardo was basically a gold standard guy, working to put Britain back on a gold standard system after the pound was floated in 1798 due to the Napoleonic Wars. However, he is now remembered for “Ricardian equivalence,” which was not really Ricardo’s main interest at all, and constituted just some minor comments in one of his books.

Here is how the IMF describes “Trffin’s Dilemma:”

Testifying before the U.S. Congress in 1960, economist Robert Triffin exposed a fundamental problem in the international monetary system.

If the United States stopped running balance of payments deficits, the international community would lose its largest source of additions to reserves. The resulting shortage of liquidity could pull the world economy into a contractionary spiral, leading to instability.

If U.S. deficits continued, a steady stream of dollars would continue to fuel world economic growth. However, excessive U.S. deficits (dollar glut) would erode confidence in the value of the U.S. dollar. Without confidence in the dollar, it would no longer be accepted as the world’s reserve currency. The fixed exchange rate system could break down, leading to instability.

Triffin proposed the creation of new reserve units. These units would not depend on gold or currencies, but would add to the world’s total liquidity. Creating such a new reserve would allow the United States to reduce its balance of payments deficits, while still allowing for global economic expansion.

Ah, yes. The “Balance of Payments”! I said already that this is a red flag:

From the IMF description, you might have the impression that the United States was running a balance of payments deficit (i.e., a current account deficit) — perhaps one of catastrophically large size. 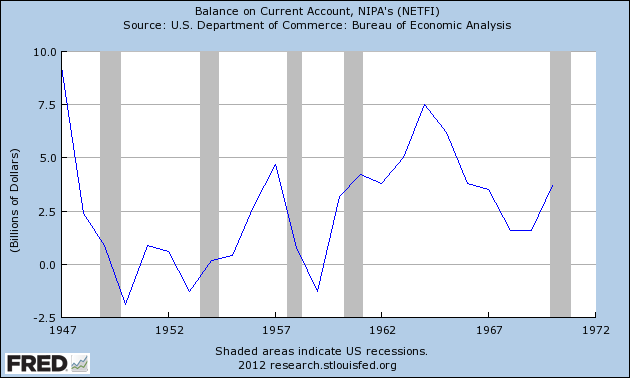 The U.S. current account balance was generally positive during those decades. An economist who wants to get all huffy and puffy about some statistic, when he can’t even get the plus or minus sign right, is generally one who I don’t pay much more attention to.

Now, it is true that central banks around the world were accumulating U.S. debt assets (Treasury bonds), as part of their monetary operating systems, as is normally the case in a currency board arrangement such as the Bretton Woods system was. They were even accumulating U.S. dollar banknotes, to use in transactions. OK, so what? That is how a monetary system is supposed to operate. The currency manager has to accumulate some kind of reserve asset, with the majority of it typically in debt instruments, as has been the case in gold standard systems (and also floating fiat currency systems) for the past three hundred years. What difference does it make if the debt is owed by the U.S. government or some other government, or some other borrower? There is no difference at all, besides a few minor consequences.

The actual problem of those days was the fact that dollar base money was consistently in excess of demand — in other words, a “dollar glut” as the IMF page describes. The result was that the value of the dollar was consistently sagging beneath its gold parity, and consequently, the U.S. Treasury and Federal Reserve were having redemption requests into gold bullion. The solution was to reduce the dollar monetary base, thus bringing supply in line with demand and supporting the dollar’s value to meet its promised gold parity. This is just the normal operating mechanisms of any gold standard system, which were not being very well observed in those days. This contraction of base money supply would not be recessionary, because we wouldn’t be raising the currency’s value (beyond the small amount that it deviated from its parity, typically of less than 10%). Instead, the effect would most likely be an economic positive, because people could go about their business without worrying if their currency is going to have some kind of accident.

The basic issue during the Bretton Woods era was the conflict between a gold standard policy (i.e., keeping the dollar’s value at $35/oz.), and a domestic monetary policy which was a sort of Keynesianism-lite. I say “lite” because the gold standard policy precluded more aggressive attempts at Keynesian funny money. This contradiction was managed, not very effectively, with capital controls during that time. Triffin did touch on this topic somewhat tangentially, when he described a conflict between domestic interests (the desire to “fine tune” the economy with Keynesian funny money) and international interests (the world gold standard system). However, Triffin generally failed to correctly identify the problem, or the proper solution. This led him down some rather bizarre paths. He eventually became an advocate of the IMF’s “Special Drawing Rights,” which were a currency basket of major international currencies, such as the U.S. dollar, British pound, French franc, Japanese yen, German mark and so forth. However, all of those currencies were also pegged to the dollar via the Bretton Woods system, so they were, in effect, different versions of the dollar. This SDR was supposed to take the place of gold bullion in redemption, or serve as “paper gold” as it was termed at the time.

Imagine you are a German. The dollar is trading at $38/oz. on the open market, compared to the official parity of $35/oz. You decide to give your dollars back to the Fed and get gold in return. But, instead of giving you gold, they give you SDRs. This SDR consists mostly of dollars, with some German marks and other currencies. Germans don’t need German marks. They can make as many as they want themselves. Thus, the effective transaction was dollars for dollars, which is largely meaningless. The introduction of the SDR in 1969 marks the effective end of gold bullion redeemability. August 1971 really represented the official end. The consequence of the lifting of the redeemability requirement was the end of the Bretton Woods gold standard system.

Thus, we find that Triffin, by way of his misunderstanding of the events of the time, basically became one of the architects and promoters of the end of the Bretton Woods gold standard system. This is why I say that the main reason the system ended was brute ignorance. People at the time simply couldn’t figure out what was going on. (Apparently, they couldn’t even figure out whether the “current account balance” was positive or negative.) The solution was as simple as having the Fed adopt a proper gold standard operating mechanism to go with its gold standard policy, which would lead the Fed to reduce the base money supply by selling some sort of asset and absorbing the funds received in payment. In practice, we would probably see the base money supply expand soon after, because of the natural effects of an expanding economy, and also because a currency that is being managed properly is much more popular (and thus in demand) than one that is not.

This “dilemma” is represented today as the “currency trilemma.”

The “currency trilemma” basically states that there are three options:

However, the third option — which the Bretton Woods system was — is inherently unstable. Eventually, the fixed value policy and the domestic monetary policy come into enough conflict that the system blows up. Plus, to prevent this blow up from happening even faster, you would need heavy capital controls, which are a problem in themselves. Also, you don’t really get that much effect from your “domestic monetary policy” anyway, because it can never be very aggressive, lest it blow up your fixed value policy and your capital controls.

When people of that time talked about the “balance of payments” and the “current account balance,” they mostly weren’t talking about the actual balance of payments or the actual current account balance, which as we have seen don’t match their narrative at all. They were really talking about the inherent conflict of the time between the gold standard policy and a funny-money operating mechanism, and the consequences of that conflict. Unfortunately, it seems like people still can’t figure this stuff out, which is pretty pathetic really, and still talk about “Triffin’s Dilemma” like it was some sort of serious topic of consideration, and not just a historical artifact of a time of rather piteous economic misunderstanding.