We have been talking about the term “sterilization,” and various situations to which it is applied.

Look at the previous item to see the first three examples. By the way, that item was significantly updated, and is worth a re-read.

Now we will look at the fourth, and perhaps most complicated, notion of “sterilization,” having to do with the regular activities of central banks in the pre-1930 (and especially pre-1914) period.

At its simplest, the “100% reserve” or “warehouse receipt” system, which I call the “Making Change” system in Gold: the Monetary Polaris, the reserves of the currency issuer (for example, a central bank) are 100% gold bullion. The issuer agrees to swap banknotes and bullion at any time, at the parity price.

If we step up the complexity a little bit, we come to what has been called a “fiduciary” system. In this system, some portion of the reserve assets consist of debt, typically government debt. However, this debt portion is generally unchanged. All of the activity is in bullion itself. One example of this was the Bank of England Issue Department 1844-1914. This is something of a hypothetical example, since the “Issue Department” was something of an internal accounting convention for the Bank of England, which also had a Banking Department engaged in a variety of other activities. 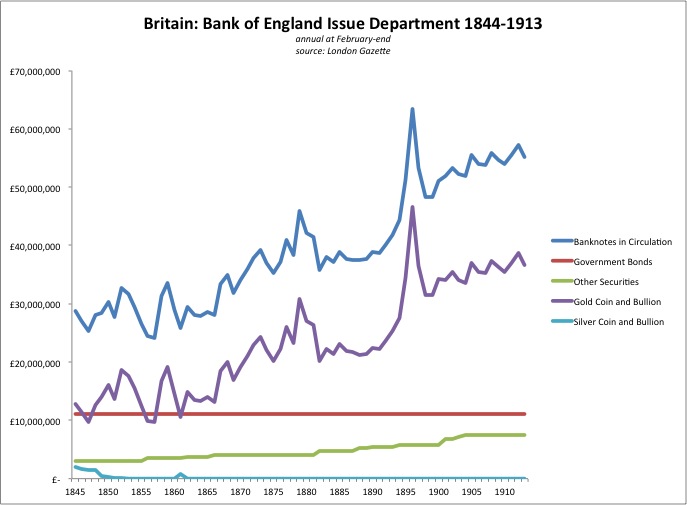 Here we see that the Issue Department held an unchanging quantity of government bonds, plus holdings of Other Securities which had only a few changes over the years. (The increases in Other Securities can be considered an asset swap, described previously as Example #3.) All of the variability was in bullion. The variability in bullion came about via conversion. Thus, total base money again reflected exactly that amount that was necessary to maintain the value of the currency at the gold parity value.

However, it was common for central banks, or other currency issuers, to also be active in discounting and lending. This produced interest income. The volume of discounting and lending changed on a daily basis. Here’s an example of the Bank of England, aggregate balance sheet (Issue and Banking Departments combined), for 1905-1910. 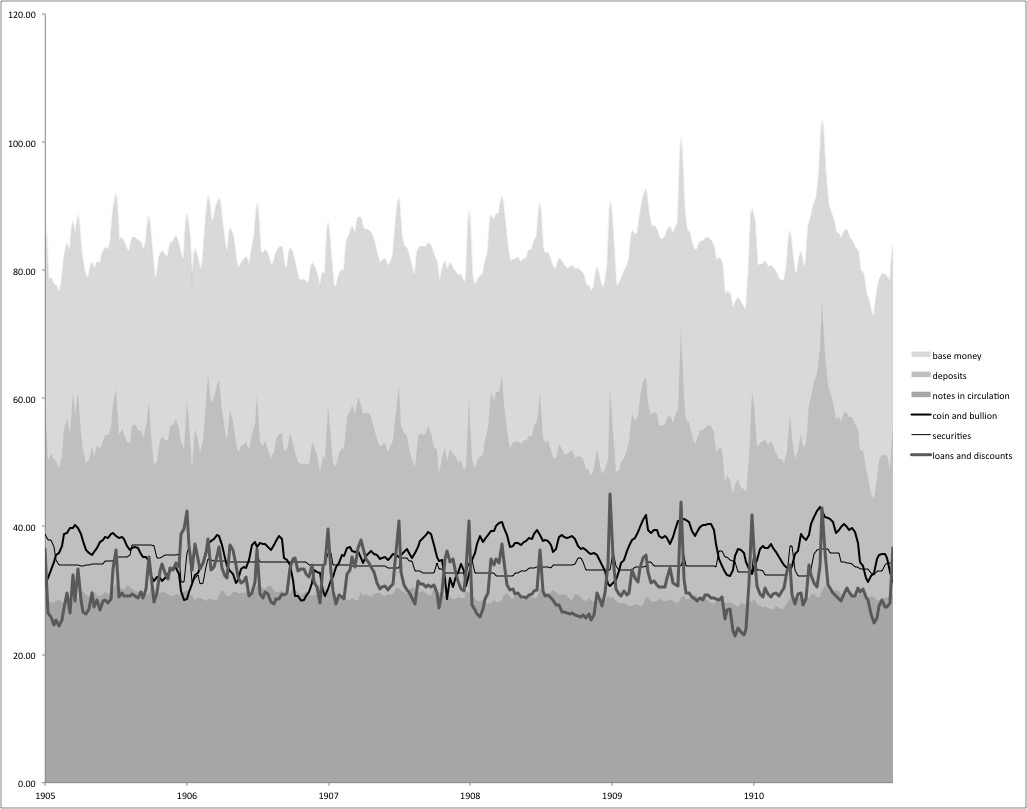 This is a complicated chart. The shaded area portions represent the liabilities side of the balance sheet — deposits, banknotes, and total base money. The lines represent the asset side: bullion, discounting, and securities (government bonds). This is weekly data.

For most central banks of the pre-1914 era, the situation was even more complicated because they were also active in foreign exchange on a constant basis.

Now, we see that the total base money is highly variable, on a weekly basis. Discounting and lending is highly variable; plus, there is a little variation now in government securities (“open market operations”) as well. The basic process here is much the same as the “fiduciary” system, except that, instead of having an unchanging amount of debt assets, the debt assets (discounting and securities) are constantly changing. Nevertheless, the process of gold convertibility at the parity price ensures that the overall supply of base money is that which is appropriate to maintain the value of the currency at its gold parity.

This process tends to produce a “see-saw” effect. Debt assets rise and bullion declines. Debt assets fall and bullion rises. If bullion assets fall to a degree that is unwanted, then the central bank might intentionally reduce its debt assets to produce a bullion inflow. This could include sales of securities, or a reduction in discounting and lending. This reduction in discounting and lending might be accomplished by a rise in the discount rate, which would make the bank uncompetitive with other banks offering similar services. Thus, overall lending would fall. The opposite might occur if bullion assets were deemed to great. To produce more interest income, the central bank might increase its discounting, lending and holdings of government bonds. This would produce an outflow of bullion.

This “see-saw” effect is sometimes called “sterilization.” A lot of confusion has resulted, regarding the regular operation of central banks in the pre-1914 era (notably following the description of this supposed “sterilization” by Arthur Bloomfield in 1959). However, it has nothing to do with the process identified in examples #1 or #2. In example #2, you would have a decline in currency value and a gold bullion outflow due to conversion. Normally, the monetary base would be reduced by the amount of the conversion, thus supporting the currency. However, this process would be cancelled out by increases of debt assets.

Here is an example from the Federal Reserve, operating with similar principles, in the 1920s and early 1930s:

Here we see base money (top pink line), which follows a smooth curve during the 1923-1930 period, and then begins to rise after 1931. This smooth curve (with a little seasonal wiggle) is basically the amount of base money that was necessary to maintain the value of the dollar at the $20.67/oz. parity — in other words, the “demand for money” at that parity. Bullion conversion was active during this time.

The overall effect was something like the “reserve asset swap” of Example #3, although accomplished via automatic gold conversion rather than some deliberate program. Despite all this complexity, the basic situation here was that gold conversion was actively maintaining the value of the currency at its gold parity, not really all that much differently than in the “fiduciary” example shown earlier, or even in a “100% reserve” or “Making Change”-type system. Since this is also basically how currency boards work today, we can see that, despite all this complexity, central banks basically operated much like currency boards, a “currency board linked to gold.”