This continues some investigations that we began last week. 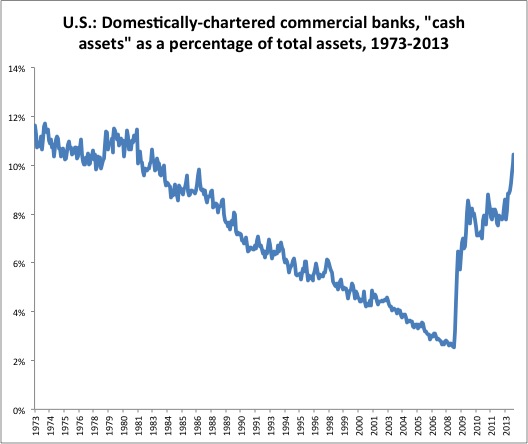 This shows the assets of U.S. domestically-chartered banks, in particular the ratio of “cash assets” to total assets. “Cash assets” are either deposits at the Fed (bank reserves), or deposits/other immediately callable loans to others.

Over time, this declined, as banks decided that they would rather have a higher portion of higher-interest-bearing term assets (loans and bonds). Recently, it has risen again as banks seek more “liquidity.” Banks don’t want to lend to each other today, so that means they have to keep more “cash assets” on hand. This ratio has risen considerably, but is not too high historically, basically returning to about where it was in 1970. 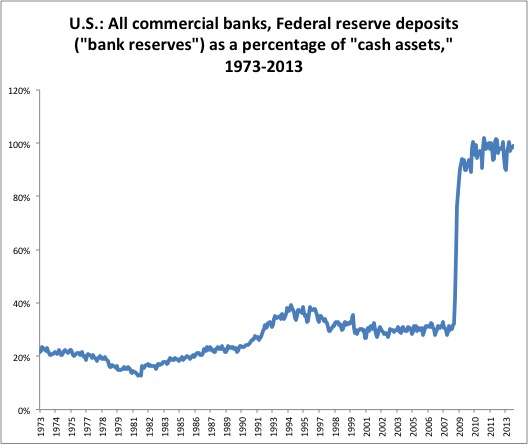 However, the composition of “cash assets” has changed. In the past, it was only about 25% Fed deposits, and 75% loans to others with immediate callability (in practice, probably overnight loans to other banks). However, since banks don’t want to loan to each other anymore, fearing default, the have concentrated almost entirely on Fed deposits. 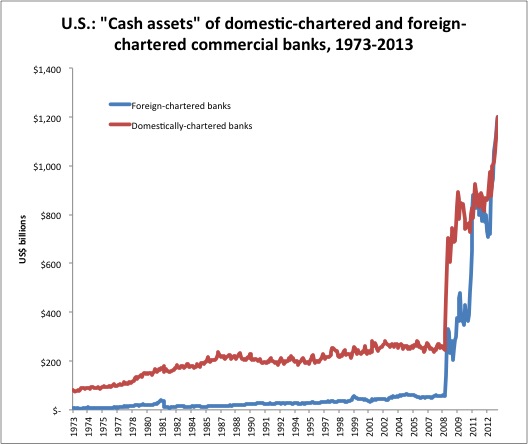 In the past, foreign-chartered commercial banks had a relatively small amount of “cash assets” in their U.S. subsidiaries. But, this has changed. Also, what they have is likely 100% Fed deposits today, as is the case for domestically-chartered banks. What this means is that there has been a huge increase in demand for Fed deposits from foreign-chartered commercial banks (mostly European). 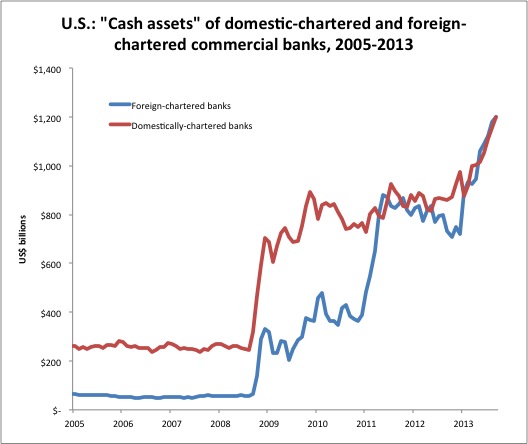 Here’s a closer look at the same thing, since 2005. We can assume that “cash assets” after 2008 are 100% Fed deposits. We see some interesting things here. Essentially all of QE2 (2010-2011) was ultimately absorbed by foreign banks, with little expansion in Fed deposit holdings by U.S. banks. Also, the more recent QE3+QE4 was mostly absorbed by foreign banks thus far, although it seems to be about 50:50 at present.

This does not necessarily mean that European banks “demanded” i.e. wished to hold these larger Fed deposits. The Fed creates these deposits via its QE programs; the banks don’t get to decide that. However, it does indicate relative desire to hold Fed deposit balances. In other words, the foreign banks wished to hold these deposits more than domestic banks (or disliked them less), even if, possibly, both did not actually want any more deposit holdings in an absolute sense. 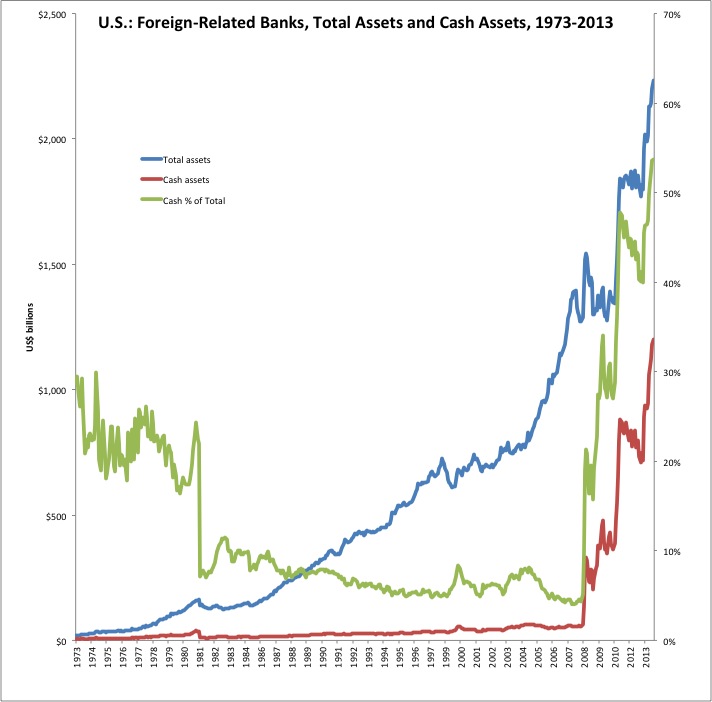 The U.S. subsidiaries of foreign banks used to be run much like domestically-chartered banks, with cash assets around 5% of total assets. However, since 2008, this has grown to a very high level over 50%. This doesn’t make much sense in terms of U.S. operations alone, but probably represents Fed deposits being held as a portion of all central bank deposits (ECB+Fed especially), in relation to the bank’s consolidated balance sheet. In other words, “cash assets” (today exclusively central bank deposits) are being managed on the consolidated level. 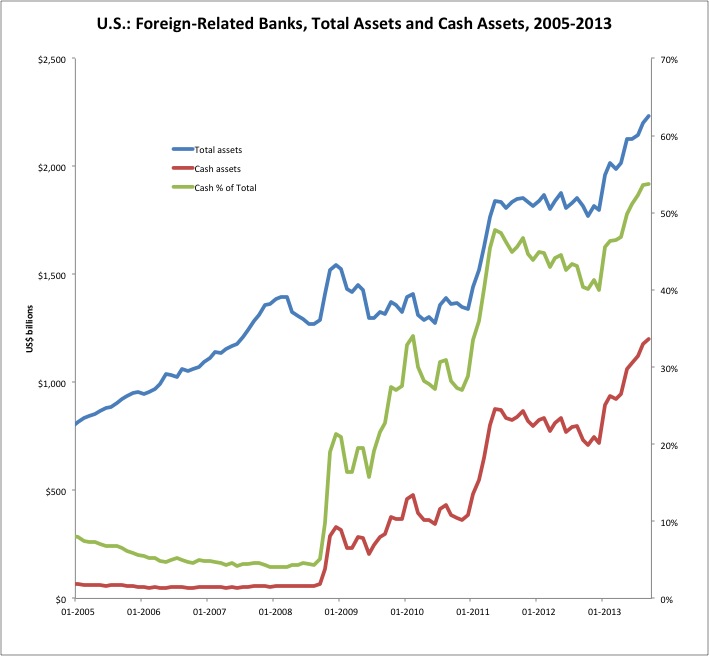 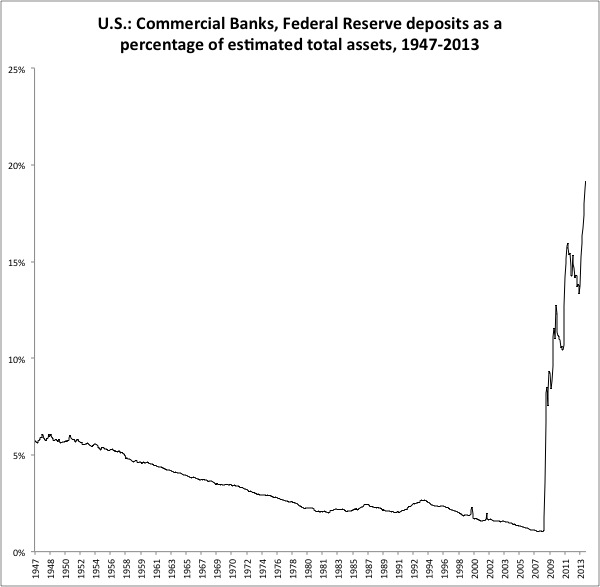 This shows the ratio of Fed deposits (bank reserves) as a percentage of total assets at U.S. banks since 1947. The latest figures around 20% are different than the first chart because both domestically-chartered and foreign-chartered banks are included here.

What do I see here?

Overall, I think that banks, both foreign and domestic, have more reserves than they wish to hold; in other words, that the Fed’s QE programs are oversupplying base money. This is evidenced by the very high prices for loans and bonds at this time. Banks are “attempting to spend” their “excess cash” on loans and bonds (in other words, changing their balance sheet composition towards more loans/bonds and less cash), in this process bidding prices to very high levels.

However, one reason that the Fed’s QE programs have not yet had the inflationary effect one might expect appears to be that a substantial portion of it has been absorbed by what appears to be new demand from foreign banks.

As we saw last week, this could be related to the contraction of bank reserves in Europe by the ECB, basically the withdrawal of the LTROs. 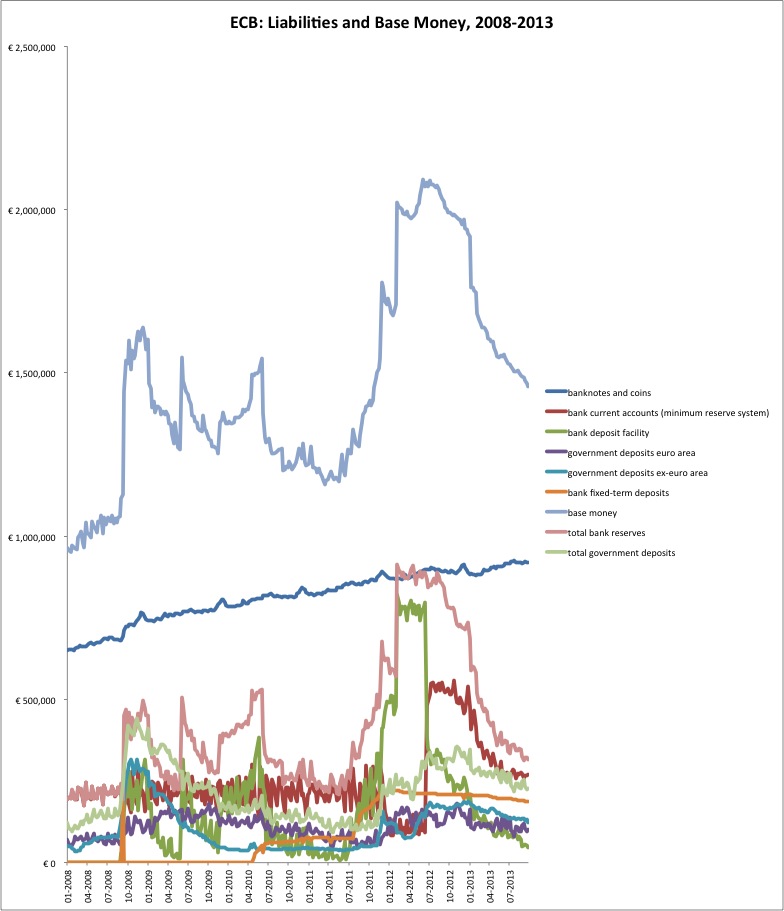 The important line here is the pink line, which shows bank reserves (ECB deposits of banks). It has contracted almost back to pre-crisis levels. This is driving overnight rates up a bit in Europe, leading the ECB to talk about more LTROs or at least, not contracting it any further. It would make sense that European banks would also want to hold more “cash assets” and, in effect, central bank deposits than was the case in the pre-crisis period, as we saw was the case in the U.S. in our first set of charts. However, the ECB has not allowed them to do so readily.

We also see that the surge in foreign banks’ holdings of Fed deposits (the absorbtion of QE2) corresponds to a decline in euro bank reserves (pink line) in late 2010.

Especially with various swap agreements and so forth, I suspect that European banks are able to use Fed and ECB deposits somewhat interchangeably. This has allowed them to substitute the “excess” of Fed base money for the “shortage” of euro base money, notably without moving exchange rates much.

I think that “gold prices” are also being heavily managed at this time, as has been amply evidenced by others elsewhere. However, one reason this has been as successful as it has been, I hypothesize, is that the Fed hasn’t been supplying as much excess base money as it might appear, due to demand from European banks.

We see that the contraction process in euro bank reserves (pink line) has pretty much run its course. It won’t go much lower. This implies that European banks might not have much desire to substitute Fed deposits for shrinking ECB deposits; in other words, the additional demand for Fed deposits would cease. This would mean that, if the Fed continues its QE3+QE4 program, it might have more of an inflationary (i.e. a tendency toward a decline in dollar value) than it has had thus far. This could be prevented for some time perhaps by the various market management techniques already in play. However, the forces they would have to contend with would intensify, while their ability to do so has already been weakened considerably by maintaining their present operations for as long as they have.

In other words, the expected consequences of aggressive money printing — basically, lower currency value — may manifest in a more substantial way in 2014.

This might suggest why the Fed has been talking about tapering. I suspect that, if these hypotheses have merit, the Fed and the ECB are well aware of the situation, and are likely working together in that regard. If the ECB’s LTRO contraction stops, the Fed would want to stop increasing base money supply.

With a little more thought, you might hypothesize that this was done on purpose. The ECB and Fed are more-or-less owned and managed by the same entities, so why not?

However, as we have seen, the Fed has been shying away from actually tapering. I don’t think they will do anything before Yellen arrives in February 2014. And, I think that Yellen will be even more dovish than Bernanke on average, not willing to do anything that could cause short-term turmoil (i.e. higher Treasury yields), and perhaps even pushing for a still more aggressive policy (QE5), as has been hinted by her public statements. The other FOMC members are perhaps not as gung-ho about “easy money” as Yellen, but the 9-1 vote in favor of continuing QE3+4 at the last FOMC meeting in October says to me that they all use the same playbook. It’s just a matter of degree.

One potential source of greater base money demand coming up is the nonbank sector. In a scenario where people wish to withdraw their deposits at banks, in other words a bank run, they could correspondingly wish to hold a greater portion of banknotes and coins. In other words, their “cash assets” would consist more of base money (banknotes) rather than demand deposits (at banks). This is exactly analogous to what banks themselves did in 2008.

Those of you who were able to follow the arguments here should give yourself a pat on the back. It takes a certain amount of mastery of these matters to understand this line of thinking.