The currency/gold ratio, in a gold standard system, is often known as the gold “parity.” For example, the U.S. dollar’s “parity” used to be $20.67/ounce.

It seems like a lot of people have trouble figuring out what an appropriate parity for a new gold standard would be. I always thought it was kind of obvious.

There are two basic options here:

1) To use the existing currency, or
2) To introduce a new currency

In most cases, the existing currency would be used, possibly with a redenomination eliminating a few zeros. Another possibility would be to introduce a new currency, but have a fixed conversion from the old currency. This was the case for the euro. The old francs, marks, pesetas and so forth were converted into euros at a fixed rate. In either case, we preserve past contracts denominated in the old currency.

In the second case, a completely new currency would be introduced. This is likely only when the previous currency has been rendered completely useless by hyperinflation (probably), or perhaps government collapse due to wartime and so forth. Or, it could be a country where people are using some external currency, or a private-market created currency.

As a general rule, the best method is the one that produces as little disruption as possible on introduction. Otherwise, people will blame the new gold standard for whatever disruption happens. There are always enemies of gold standard systems, and why give them any extra help? Also, less disruption is better on basically every level.

Particularly after a period of currency decline, there will often be a lot of inflation “baked in the system.” This is often not so much the case when a currency has declined by a large margin. Prices adjust quickly. However, in the case of the 1970s or today, inflationary price rises can result for a couple decades after the actual event of currency devaluation/decline.

Today, for example, I would guess that the U.S. economy’s general price structure is roughly aligned for about $450/oz. or $500/oz. currency values. Prices are a little higher than during the 1990s, but not that much higher. Since we are around $1100/oz. today, that would imply that prices would tend to rise by about 100%-150% going forward over a period of twenty years or so, if the dollar were stabilized at this level.

Does that mean that a $500/oz. level would be appropriate for a gold standard system that began, for example, tomorrow?

No! Obviously, this would mean a 100%+ rise in the value of the dollar (from $1100/oz. to $500/oz.) which would be extremely disruptive to say the least. The economy would implode, banks would go bust (again), and all that other business.

Ah … people say … maybe we could phase it in over five or ten years then?

The problem there is that we don’t have a gold standard and stable currency. We have a floating currency policy for five or ten years. If a stable currency is good, it is good today. 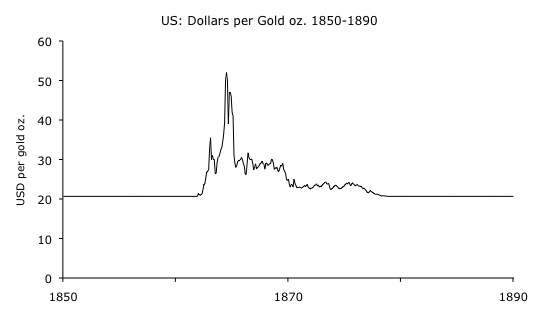 This caused considerable difficulty in both examples — although that difficulty could have been lessened, particularly in the British case, if taxes were lowered at the same time. However, considering the multi-decade or multi-century precedent that had been established at the original parities, and the many contracts that existed at those parities, it was deemed that whatever may result from the deflationary policies, the long term benefit was worthwhile. (There was a General Strike in Britain in 1926, a Panic of 1873 in the U.S.)

This ideology was possible because the amount of devaluation, in both cases, was about 50% (the currency lost about half its value) at its maximum, and even that was just a momentary extreme. The adjustment was not that big. France’s currency declined by about 80% (a factor of five) during World War I, which was a deviation much too large to correct. Instead of trying to return to a prewar parity, France just repegged to gold at the devalued, postwar rate. This worked fine in the case of France, especially when combined with substantial tax cuts in the latter 1920s.

In other words, it is often best just to let bygones be bygones, and look to the future instead. Just repeg the currency to gold at any reasonable rate, which is to say, probably within about 20% of the average rate it traded for in the last month. This is particularly true today, where we don’t have any multi-generational precedent of currencies at fixed gold parities.

In the case of the United States today, I would guess that it would be best to repeg to gold somewhere in the range of $900-$1100/oz. The midpoint is $1000/oz., and since that is such a nice round number, why not?

This is probably a higher value than many people would pick. Unfortunately, the fact of the matter is that a dollar above $900/oz., for example $800/oz., would probably produce rather unpleasant recessionary effects today. There is no particular advantage gained by choosing $800/oz. instead of $900/oz. or $1000/oz. over the long term. So, you’d have short term pain and no particular long-term gain.

It might be possible to have even $500/oz. if we had a period of dollar strength, and also a fairly strong economy. This is possible, but would require rather substantial tax cuts, along the line of a national sales tax (elimination of income taxes) or a flat tax with a sub-25% rate. On balance, that level of skill in economic management doesn’t exist anywhere in the world today, and to be honest, I don’t think the advantages of that (less inflationary adjustment) would be all that great. We could instead peg to $1000/oz. today, which is easy enough to do, and have a flat tax or what have you, and enjoy the basic benefits that the Magic Formula (low taxes, stable money) provides right away without some sort of extended probationary period.

Inflation tends to be a one-way street. It’s hard to go back and correct it, unless the currency decline is very brief. For example, if you were accustomed to a 3 pesos/dollar rate, and then the peso was devalued to 10/dollar, you could go right back to 3/dollar if you do so immediately. However, after a few years, it would be difficult to impossible to do this, so it is usually best to look forward rather than trying to turn back the clock.

Every country’s situation is different, depending on economic conditions, existing contracts, political realities, common business practices, and so forth. Usually, common sense will produce a workable solution. Just think: “well, how about this parity? What would be the result?” And then you pick the one with the best results and the fewest problems, in relation to the situation you find yourself in at that moment.

There are some people who try to figure out a “price of gold” based on the number of dollars outstanding and the U.S. official gold reserves. They typically come up with a value around $6500/oz. or so. It doesn’t really matter what stupid justifications you have, a dollar value of $6500/oz. obviously represents a major devaluation from today’s levels, and what would be the good of that? These people should be ignored. Unfortunately, about 95% of all gold standard advocates fall into this category, which is too bad, but that’s the way it is.