The principle of the Laffer Curve is: you get more of what you tax less. An income tax taxes taxable income. As tax rates go down, taxable income goes up. There is less and less reason to avoid taxes by changing your behavior, so people engage in more and more taxable behavior. The result is that governments often get the same revenue, or even more revenue, with a lower tax rate.

Bulgaria’s revenue/GDP ratio actually peaked in 2007-2008, the first years of the new 10% Flat Tax system. The economic crisis of 2008-9 depressed tax revenues, but they are now back to their long-term averages.

A recent paper by researchers in the U.S. Treasury’s Department of Tax Analysis found that:

This means: if tax rates go up by 9% (for example, from 30% to 32.7%), taxable income falls by 8.9%. You have a higher rate on a smaller taxable income, resulting in revenue that is largely unchanged. Plus, you get less real investment, which means less growth overall. When rates go down, the opposite occurs. 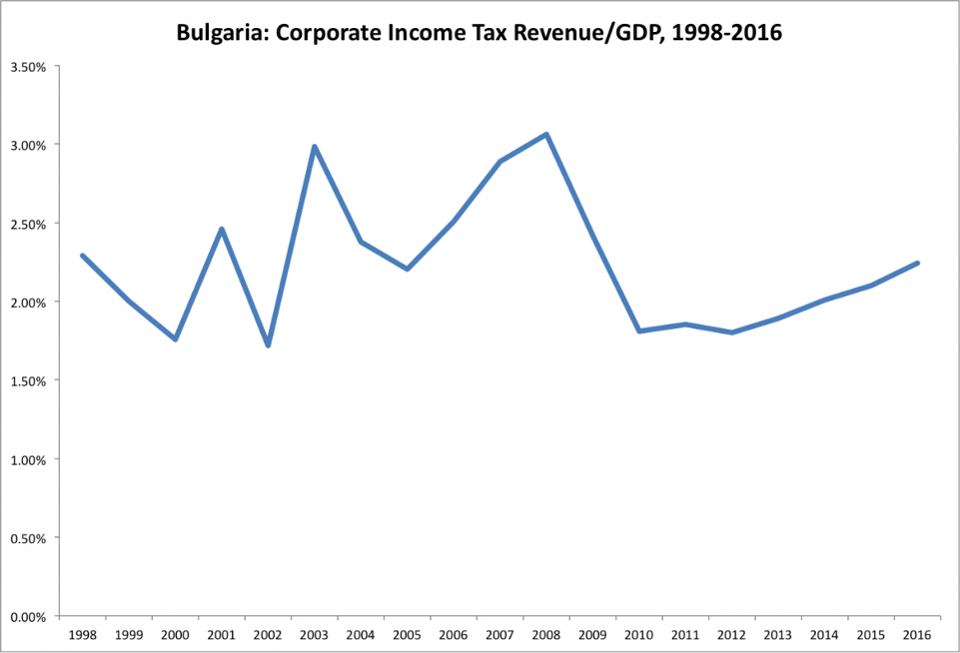 The interesting thing is: that this seems to work even with a tax rate as low as 10%.

However, revenues are not really unchanged. The revenue/GDP ratio may not change, but GDP does. Lower tax rates can allow a much larger GDP over time. Thus, the actual revenue is not unchanged, but is greater than it would have been otherwise.

We have started our journey toward a much more sensible tax system, with much lower rates. After big improvements on the corporate side, it is time to make some progress on individual taxes. Bulgaria had a similar experience with its personal income tax system, which generates more revenue/GDP at a 10% rate than it did with a 50% top rate, in the mid-1990s. However, this tax has never generated much revenue, so its usefulness as a model for U.S. policy is perhaps limited. Much more revenue comes from the payroll tax, which now has a rate of 31%. It applies up to monthly income of 2600 levs, or €1329.36 euros. This tax explicitly funds welfare programs, including healthcare and state pensions (“Social Security”), much as is the case for the U.S. payroll taxes. I think there is an interesting idea there that should be explored somewhat.

It’s time to start planning the Great Tax Reform of 2019. This time, at least a few Democrats should get on board.