We’ve been looking at the Great Depression period, with an eye toward credit.

Previously, we looked at the expansion and contraction of bank balance sheets — with deposits on one side (the “monetary contraction” that Milton Friedman focused on), and loans on the other (which is strangely ignored).

I argued previously that many economists have had a habit of mixing money and credit in a confusing fashion. The term “deflation” has been applied to a great many distinct and different situations. One such situation is a “monetary deflation” (or “inflation”), in which the value of the currency, such as its value vs. gold or other currencies, rises. This happened in the U.S. 1865-1879, in Britain 1815-1823, and in Britain 1919-1925. However, the term is also applied to an economic contraction of any sort, in which prices generally decline. It should be obvious that the value of the U.S. dollar did not rise in 1929-1932, at least in terms of gold. One could argue that the value of gold itself rose dramatically for some reason, but that argument has actually been somewhat uncommon. We will deal with it later.

In an economic contraction in which prices generally decline, it would be no surprise to see that bank lending might decline, along with bank deposits. This could be evidence of great economic difficulties, but it is not, in itself, a monetary phenomenon. This is easy to see if you consider a situation in which there are no banknotes, and all commerce is conducted with gold coins. Credit might expand, and then contract. But, the money itself — gold coins — is unchanged. This was basically what happened in the 1929-1932 period, with a currency linked to gold.

Rather, they had something to do with, or at the very least coincided with, an expansion and contraction of credit. Let’s take a look. 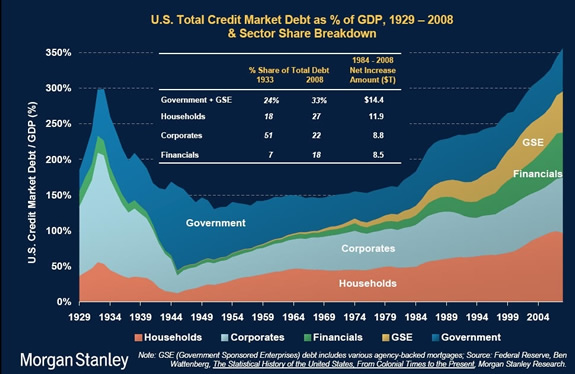 We see a big rise in credit/GDP in the early 1930s. This was entirely due to the contraction of nominal GDP, the denominator. Actual nominal credit outstanding did not expand, it contracted. We can also see that the initial 1929 starting conditions did not have a particularly high debt/GDP ratio comparted to today, although corporate credit was perhaps rather high. 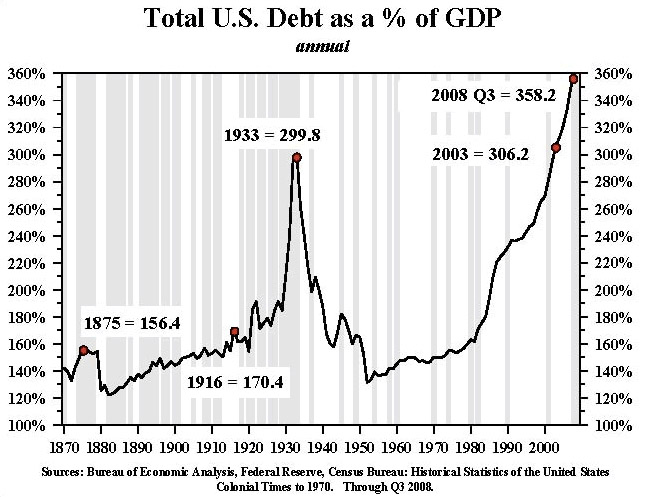 This chart does not break down credit into government/corporate/household, but it gives a nice look back to 1870. As we can see, debt levels in the 1920s were not particularly high, nor did they expand all that much during the decade. Expansion in nominal credit volume was more-or-less in line with GDP, indicative of a healthy economy. 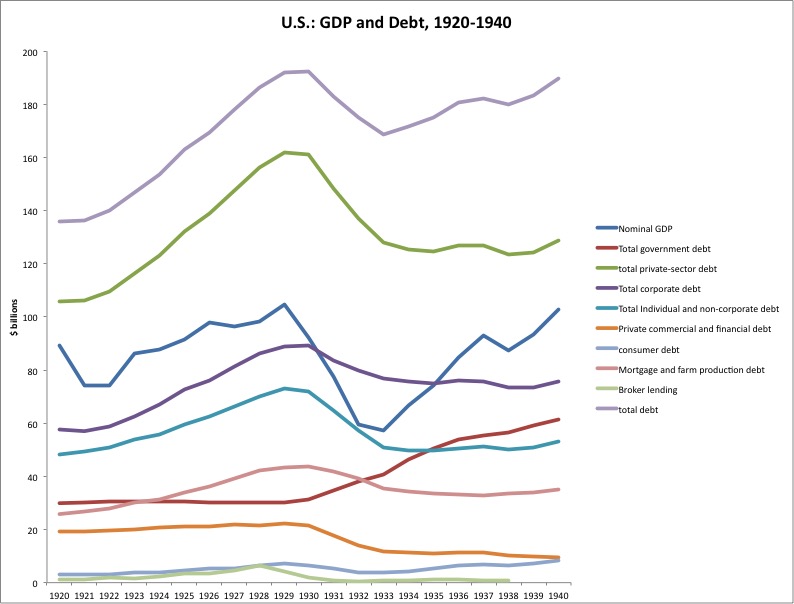 Here is a breakdown of credit in the U.S. during the 1920s and 1930s. These are nominal dollar levels. We see the big decline in nominal GDP. Total debt (top line, purple) did not expand, it contracted in the early 1930s. Government debt expanded in the early 1930s, while private sector debt contracted by quite a lot. Broker lending (margin lending) also had a big expansion, percentagewise, in the 1920s, and a contraction after the 1929 crash, although it was not so big compared to other forms of debt. Consumer debt (ex-mortgages) also had a lot of growth, but was not real big in absolute terms. The “mortgage and farm production” data is almost all mortgages. “Private commercial and financial debt” includes business debt from small unincorporated businesses, family farms etc. The source of this data is the Historical Statistics of the United States, by the U.S. Census Department. 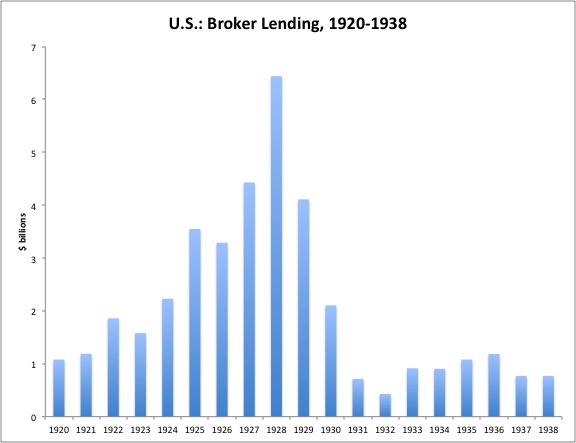 Here’s a little closer look at margin lending by brokers. The figures are for year-end, so the figures for 1929 represent post-crash levels. 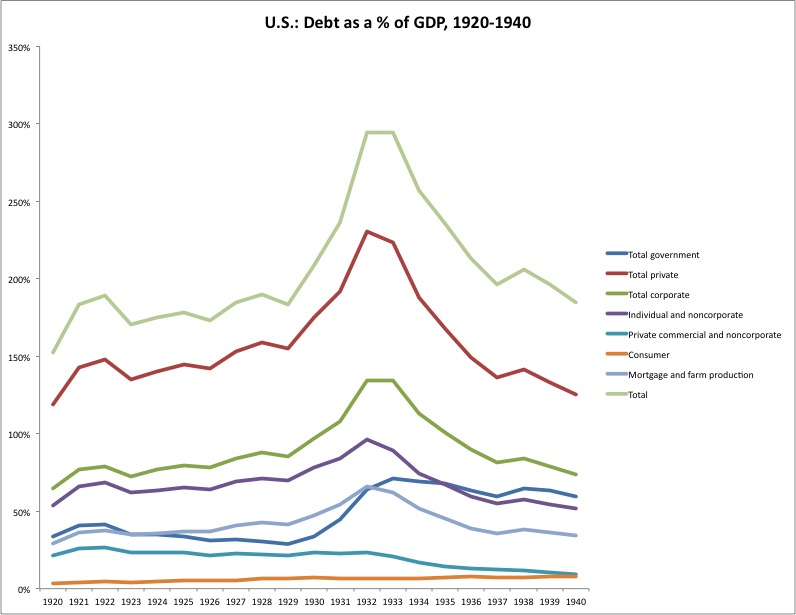 I don’t see any evidence at all of any big “credit bubble” in the 1920s. All the indications are of good health. Margin lending for securities did get rather aggressive, and the quick unwind of this leverage is the proximate cause of why securities prices crashed so suddenly in 1929, instead of declining perhaps more gradually in response to fundamental changes. However, the valuation of equities at their peak in 1929 was not particularly high, as we looked at earlier.

What I am seeing, rather, is the extraordinary contraction of credit in the early 1930s. “Contraction of credit” basically means that loans need to be paid back. This requires cash; cash requires savings; savings precludes spending. John Maynard Keynes complained about “excessive” savings that was not being directed toward new investments — and indeed, that is exactly what we see. He also complained about “hoarding” of cash. But, no cash was (successfully) hoarded. Bank deposits were contracting dramatically. Base money (banknotes) rose slightly, but not very much. Even gold coins were not particularly popular. People didn’t have enough money to buy them. There was no “hoarding.” Rather, there was a great cash drain, as businesses and individuals struggled to pay back loans due, or face bankruptcy.

I would not attach causality too quickly to this credit contraction. It was perhaps more of a symptom, or characteristic, of a great economic disaster, than a primary cause. In an environment of commercial distress for any reason, banks might naturally be nervous about making new loans. They might be facing a deposit drain, and have to liquidate assets to fund outflows. Corporations find it difficult to refinance their bonds coming due, and for good reason. Certainly there were a great many fundamental reasons for economic contraction in the early 1930s, notably the worldwide trade war set off by the Smoot-Hawley Tariff in the U.S., and the many “austerity” tax hikes around the world that followed.

Some people have posited that banks sometimes work in coordination, with nefarious intent, to create “inflation” and “deflation” — and that the Great Depression was an example of this, planned long in advance by certain global financial puppetmasters with a made-up name. (Let’s call them the “Bluehelmets”.) I am not going to attempt to touch on that topic here. But, I would suggest to others that might be interested that, if such a thing exists, it is not the “inflation” and “deflation” associated with changes in currency value — in other words, monetary effects — but rather the expansion and contraction of credit. This also means that it had nothing to do with the Federal Reserve, but rather, with commercial banks.