Once a year, we stop and think what it would be like to live without cars.

Actually, we do this quite often around here, but it is good to pause for a broader viewpoint, and also one for the newcomer to these things. Apparently there are a lot of people who come here by searching for “life without cars” on Google.

This is not so much about this or that technique, but the broader view. What would life be like without automobiles?

Then, the next thing the typical American thinks about is some kind of Small Town America reverie, where we travel around what amounts to a 19th century version of Suburban Hell, with a horse-drawn wagon, or perhaps a mountain bike.

This is, actually, virtually the same fantasy as the first, because Small Town America is in fact the template for Suburban Hell.

Actually, we humans have quite a lot of practice living without cars. We did it for 5000 years. It is supposed to look something like this: 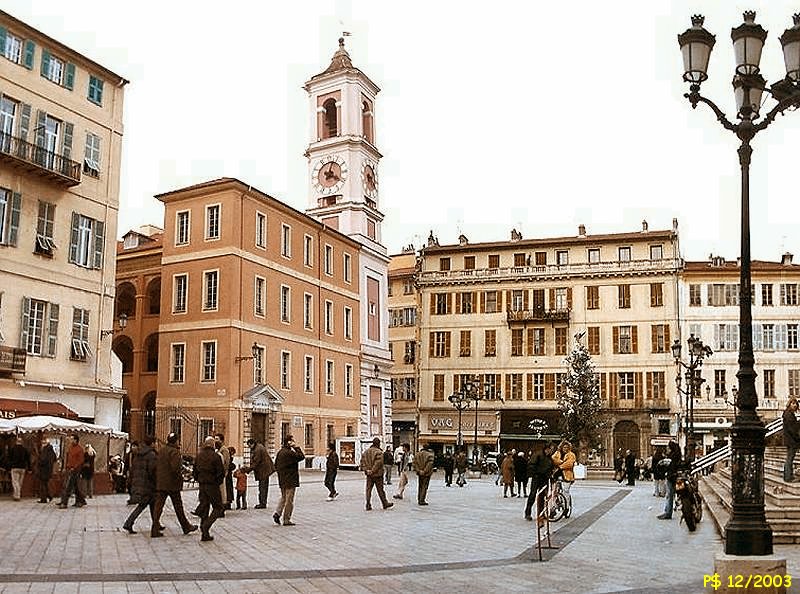 See? A beautiful place for people walking. No cars. Not many bikes, either. You don’t need bikes in a place like this. 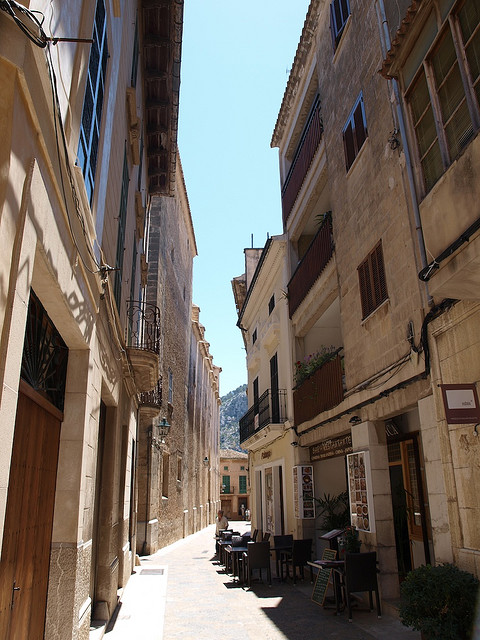 Of course, you can still have motorized vehicles. However, they are mostly commercial vehicles, for carrying cargo. There are a few buses and taxis. But, the typical person doesn’t own or need a car. And, the places they live are mostly carfree. Places for people.

There are even some places in the world in which cars are banned completely. One such place is Venice, Italy. It is considered one of the most beautiful, romantic and appealing cities in the world. You might note that Venice has also banned all bicycles! When you get rid of the cars — and the bicycles! — a city can become a beautiful place. 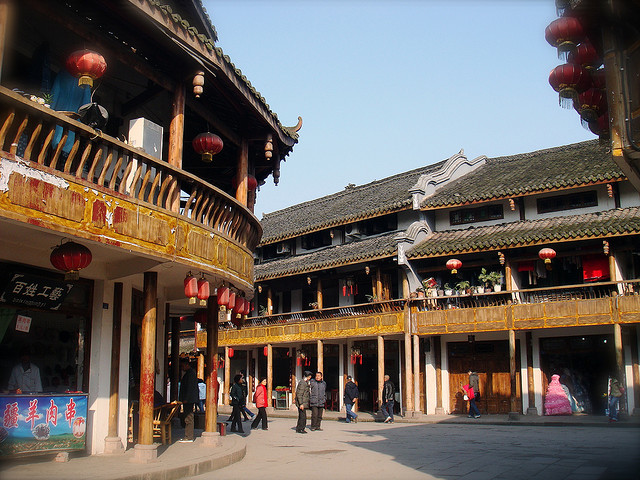 Note that these are all urban places. When you get rid of the cars, you also get rid of the “suburbs,” a mixed-up combination of urban and rural. Rather, you want to have a very clear rural pattern of farming, and a very clear urban pattern. However, when I say “urban,” it can be a very small village in a rural area, or a giant metropolis. For example, this is a picture of a small town, Uzes, France, population 8,000, which is in a rural area: 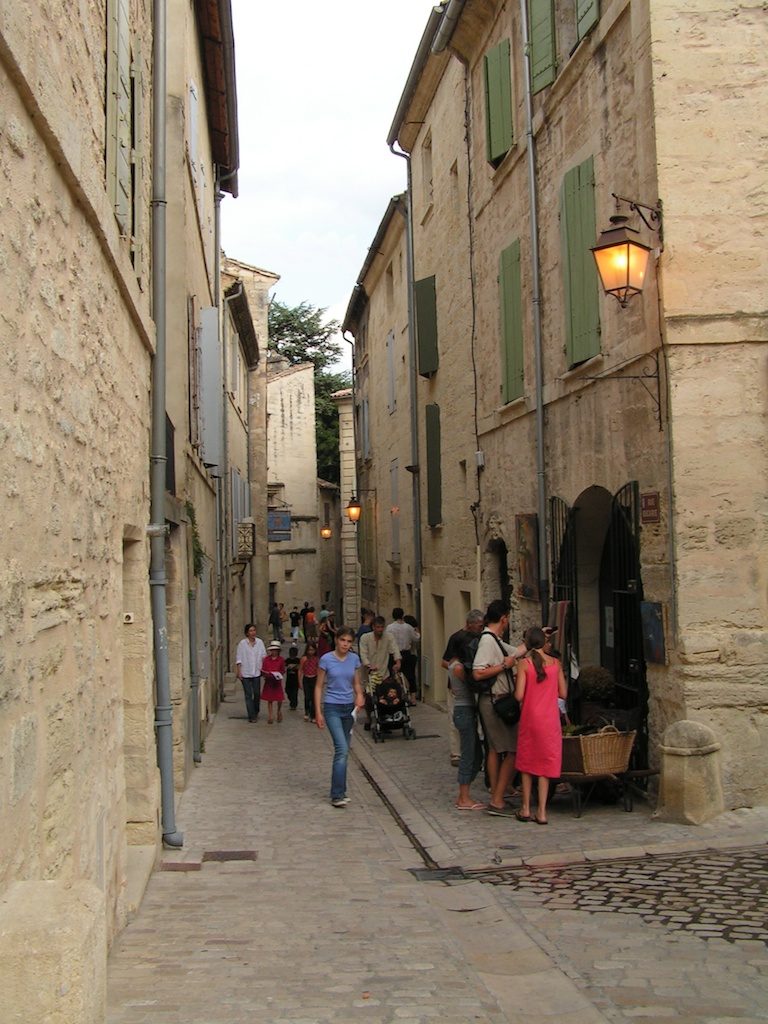 Doesn’t that look nice? See any cars?
Can you see how this is an environment where you don’t need a car?
To get from one town to another, you can take a train or bus.

Here is a picture of a much larger city, Tallin, Estonia, which has a population of 455,000. 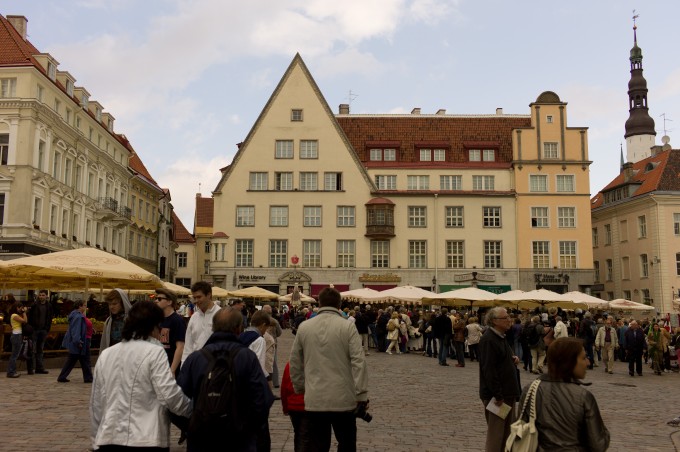 Looks about the same, right? The population is fifty times larger, but the basic pattern is the same. Unlike our experience in the U.S., where a larger city means “more traffic,” here we see that, despite getting fifty times larger, we still don’t have any need for cars. Maybe there is a train or bus system to get around town. But, mostly you just walk. 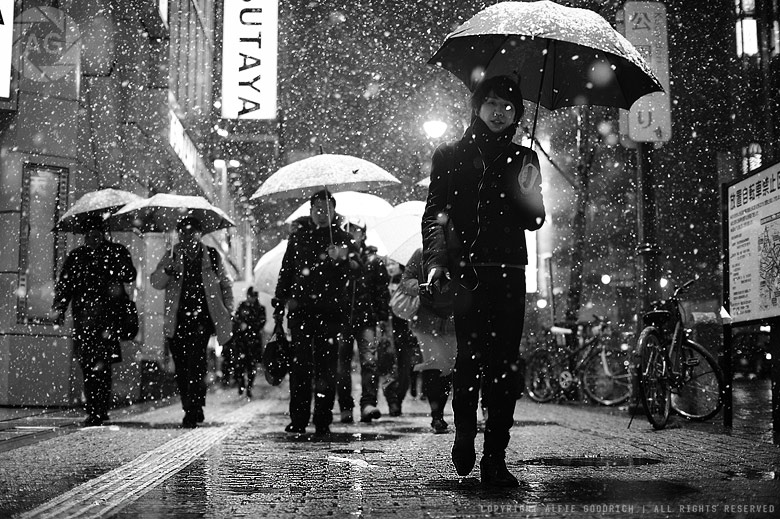 Here is a photo from a much larger city. This city has over 30 million people.

But still, we see no cars! This is the Shibuya district of Tokyo. Of course, there are cars in Tokyo, but there are also many, many places like this where there are no cars, just people walking. This is the center of the city. Most people in central Tokyo do not own a car — or a bike — they just use the excellent subway and train system. 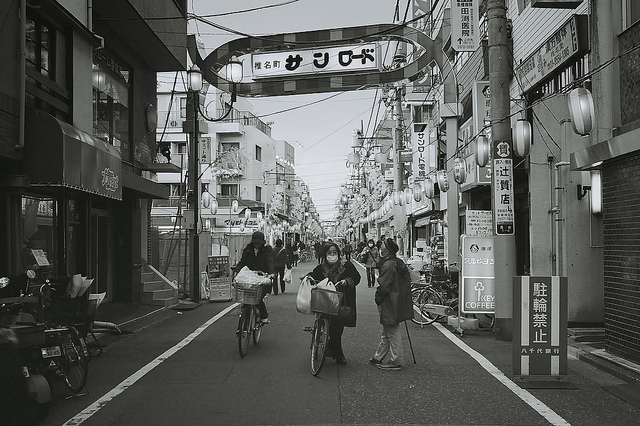 Here is a typical commercial street in the Shinamachi district of Tokyo. Once again, no cars.

So, it turns out that the secret to living without cars is to make an environment in which cars are not necessary. This is easy to do, and in fact we have thousands of years of experience in making places like this.

You just have to do it!

Even though these pictures are from both Asian and European examples, they have some things in common:

1) Really Narrow Streets. By this I mean a street designed for people, not cars. A typical street is between ten and maybe thirty feet wide, from building to building. Some are larger, but most streets are this small “pedestrian” size. No sidewalks.
2) The buildings are built side-by-side, right up to the street, without a patch of grass or shrubbery in front or around the sides. There are gardens, parks and courtyards — useful places for people to enjoy — but no space wasted on “landscaping.”
3) The design is made, first and foremost, for people, not cars, although motor vehicles might be used for deliveries and so forth. 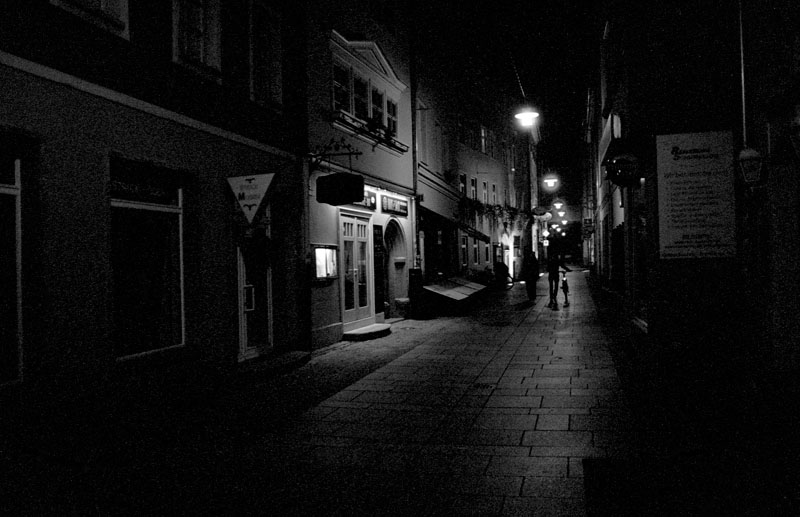 See how the street is only about fifteen feet wide? 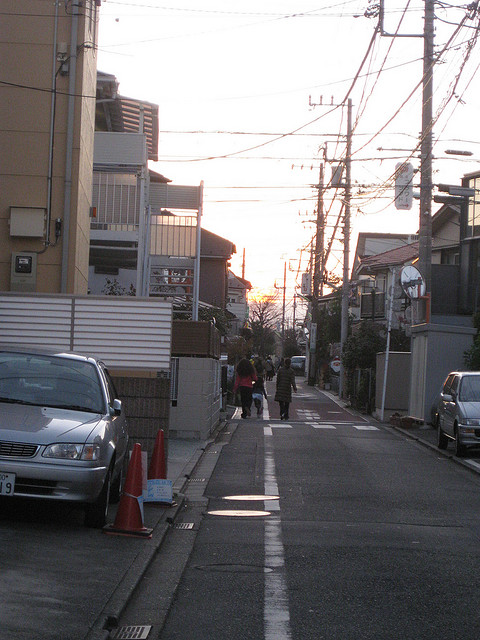 Typical Tokyo residential area. Look how quiet and pleasant it is. When you get rid of the automobile traffic, the city becomes very pleasant. 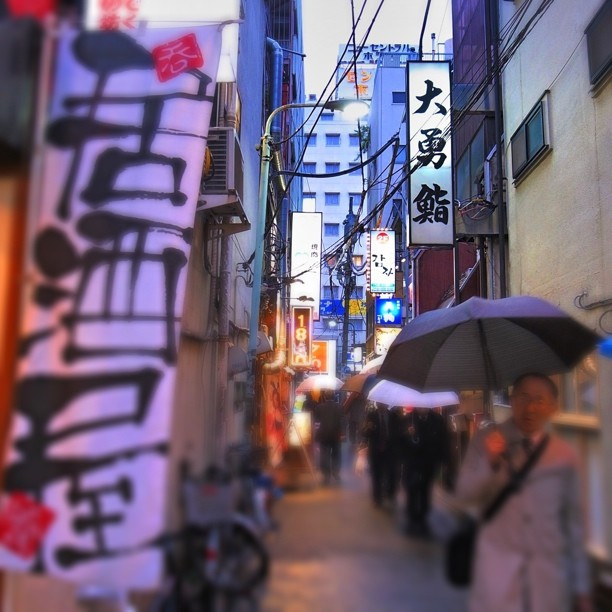 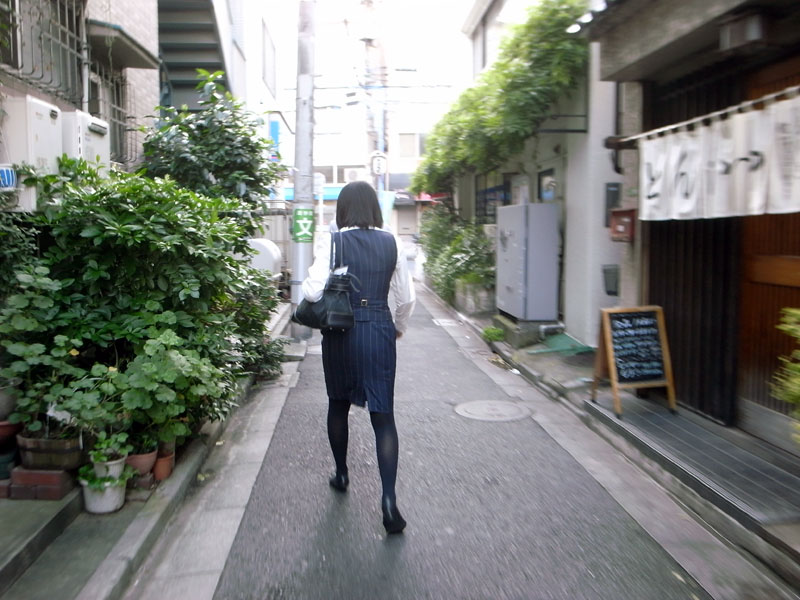 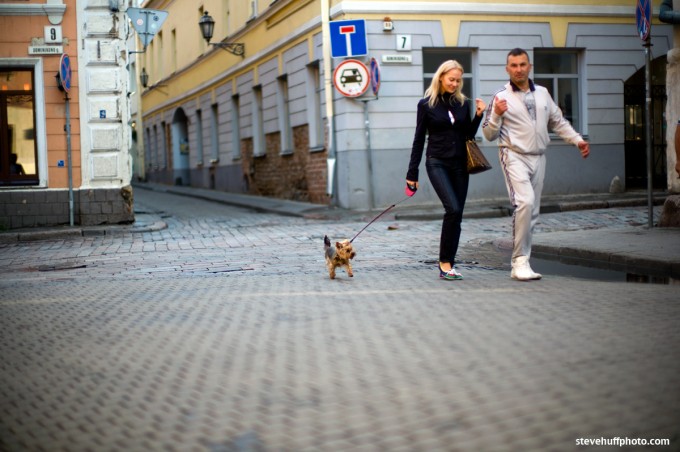 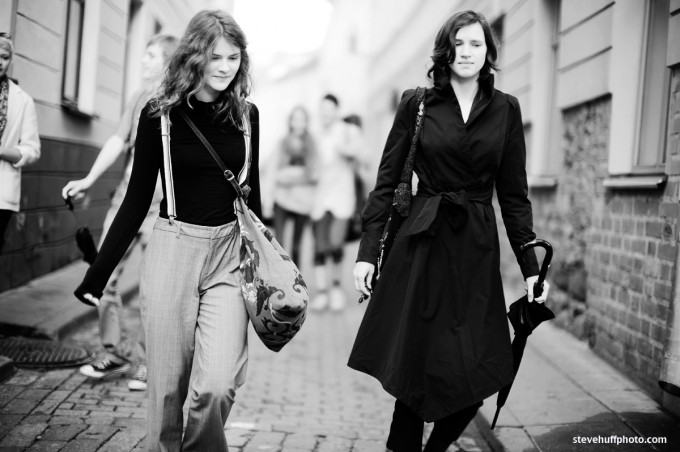 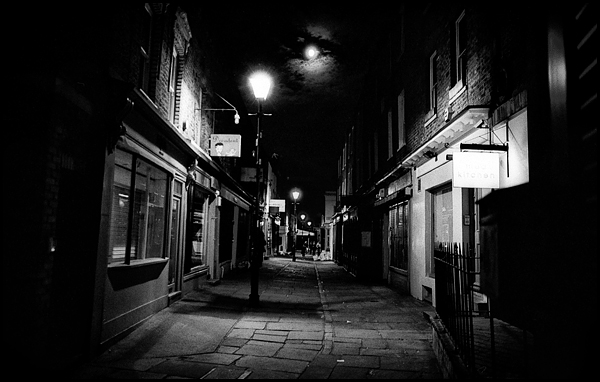 London. Giant city, but a beautiful street for people, not cars. 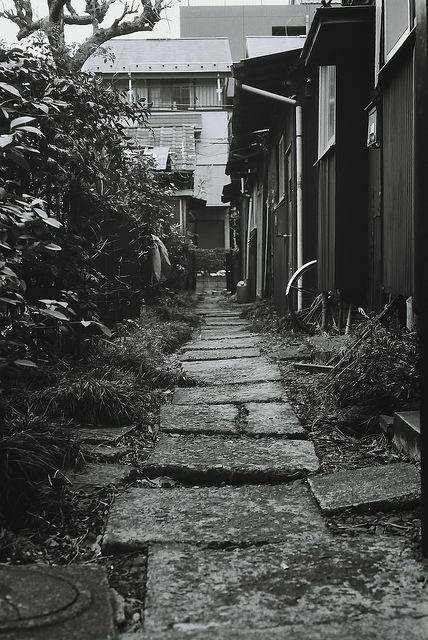 Nishi-Ikebukuro district, Tokyo. Quiet corner with some small houses. This is in the central city. 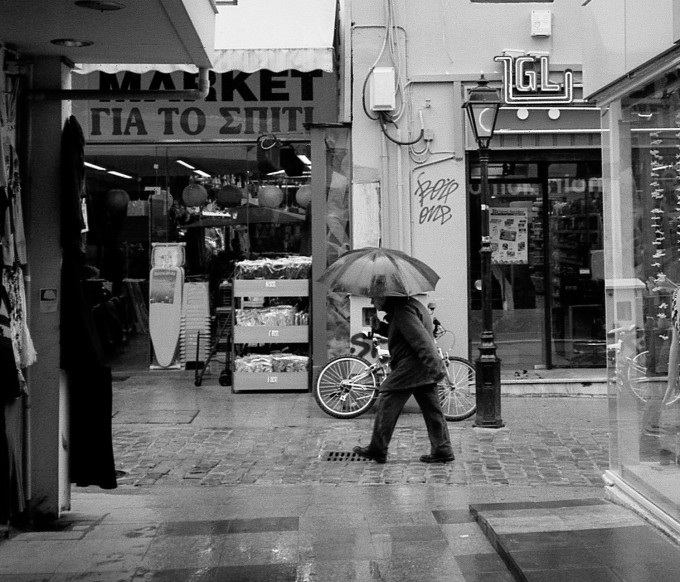 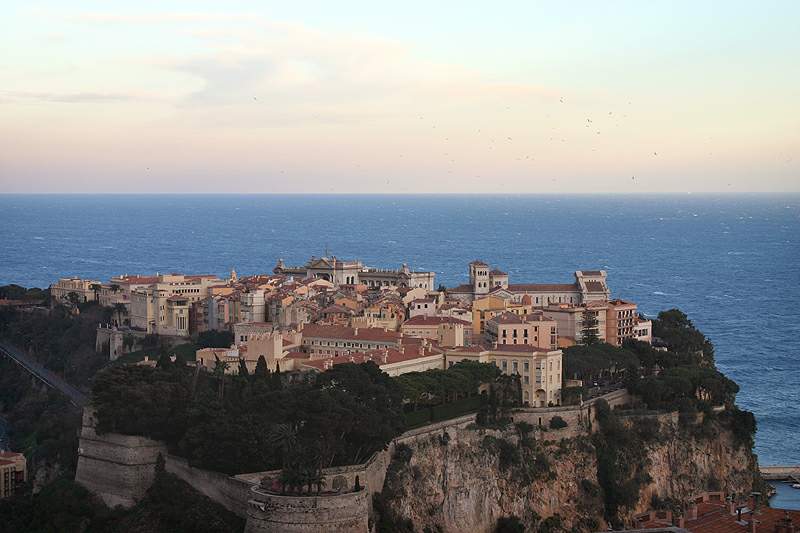 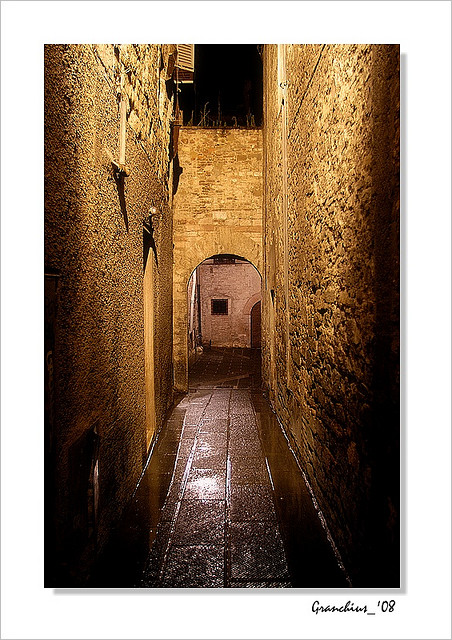 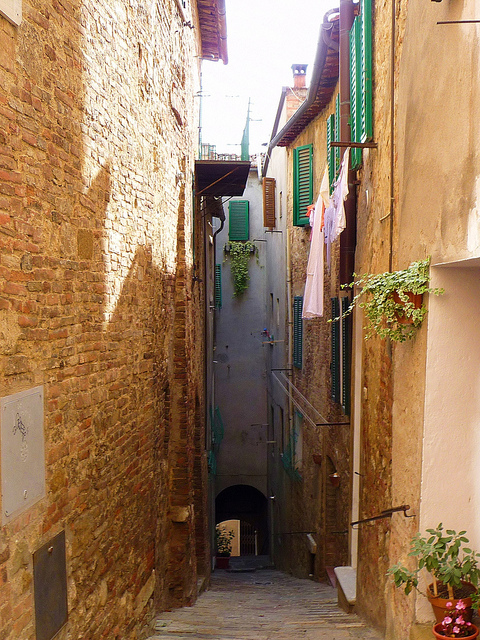 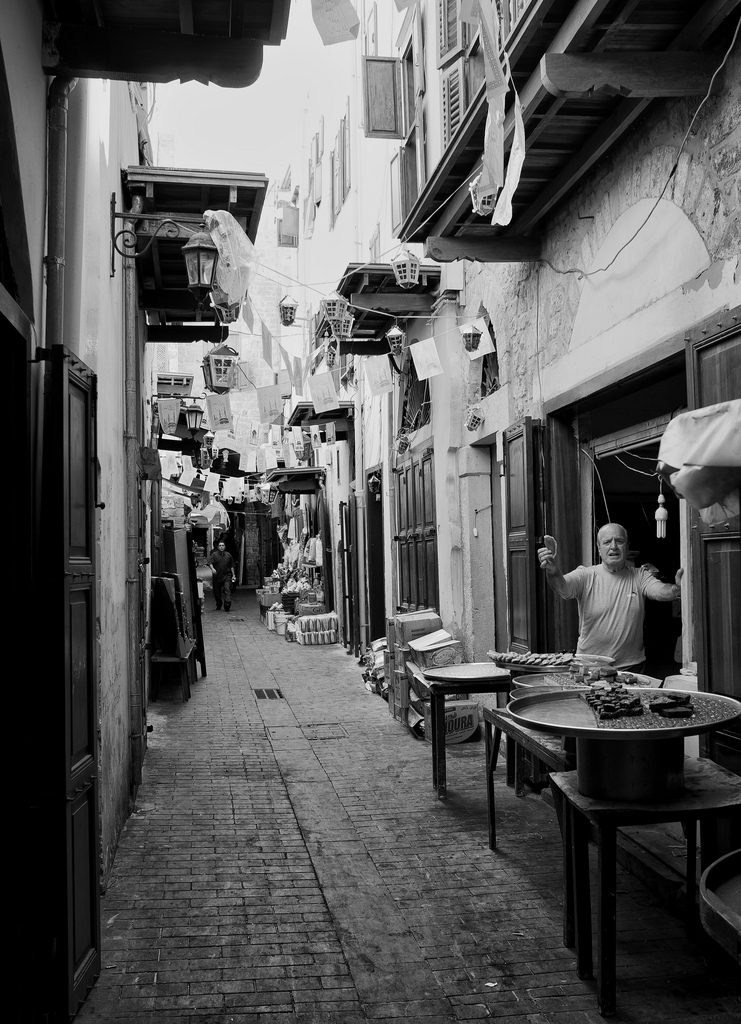 Saida, Lebanon. This fellow seems to be running a small restaurant or bakery. More fun than Applebee’s. Trust me on that. 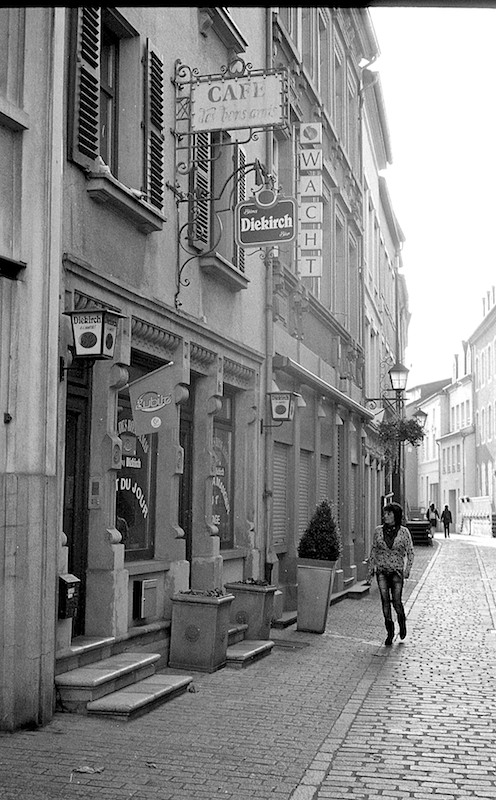 No cars here either. And no bikes. You don’t need bikes. 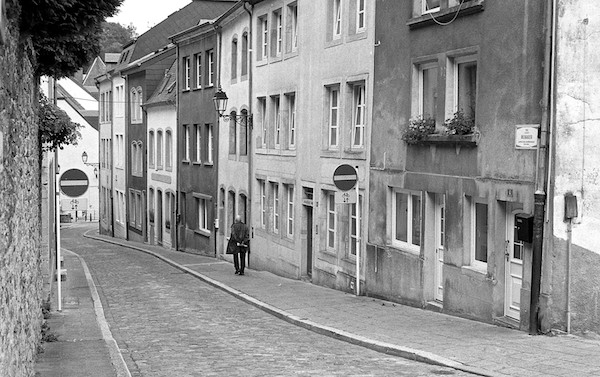 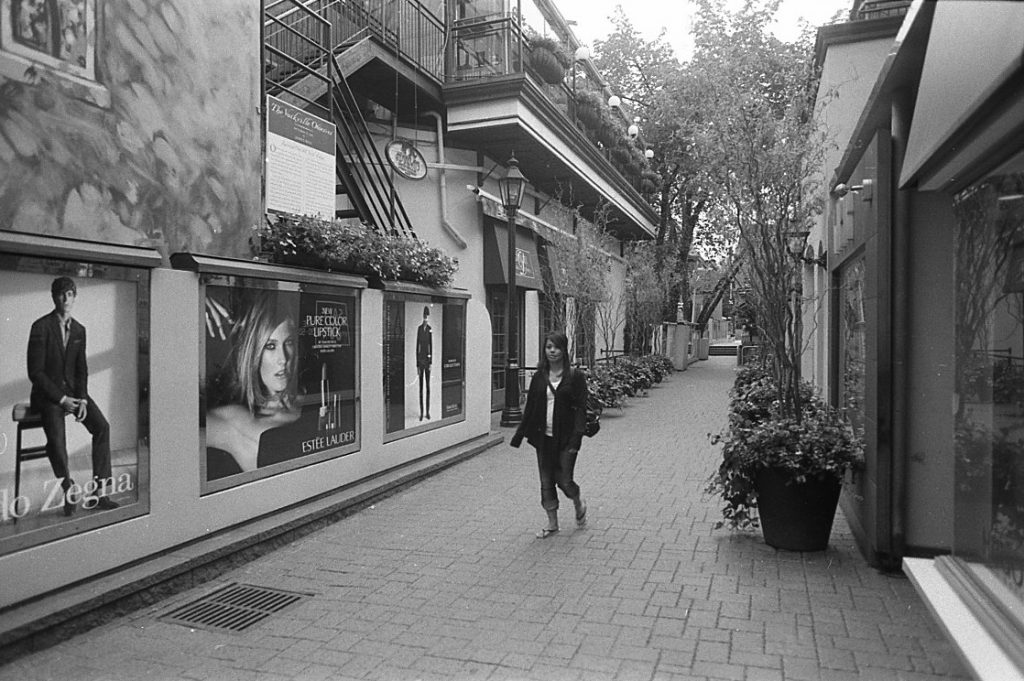 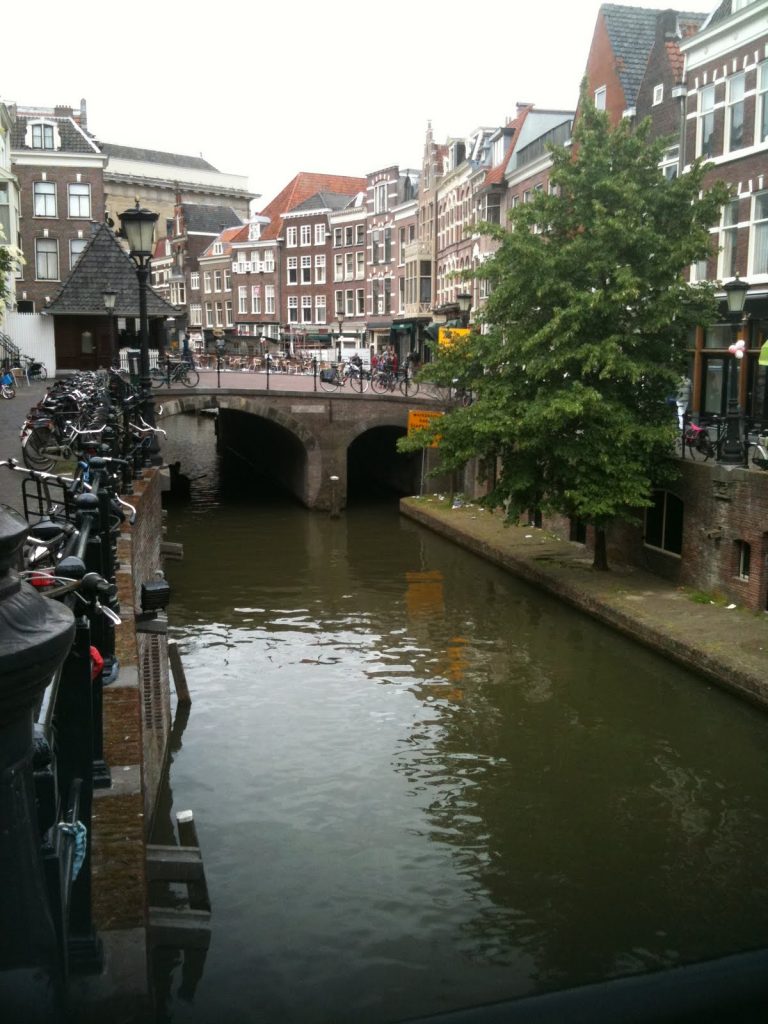 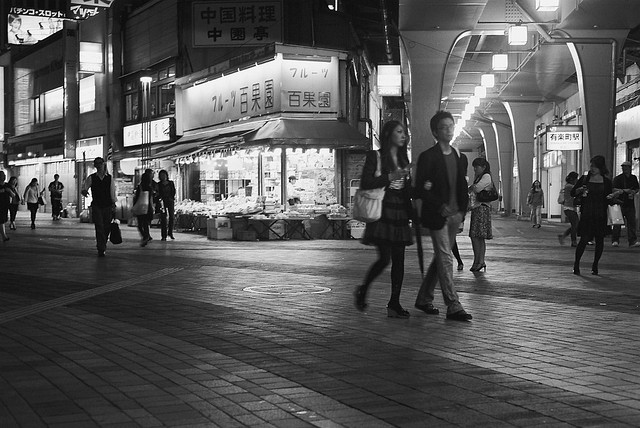 Yurakucho district, Tokyo. This is the center of the city. The bridge overhead carries a train line. You can see the entrance to the train station on the right. Another beautiful place to walk.

So you see, Life Without Cars is rather easy to achieve. And so worthwhile!

Do you really want to keep on doing what we have been doing so far?

Or, shall we have a Life Without Cars?

Previously, I’ve used the paintings of James Tissot to illustrate the beauty of upper-class European life before World War I and the automobile. It worked, so let’s continue with it. 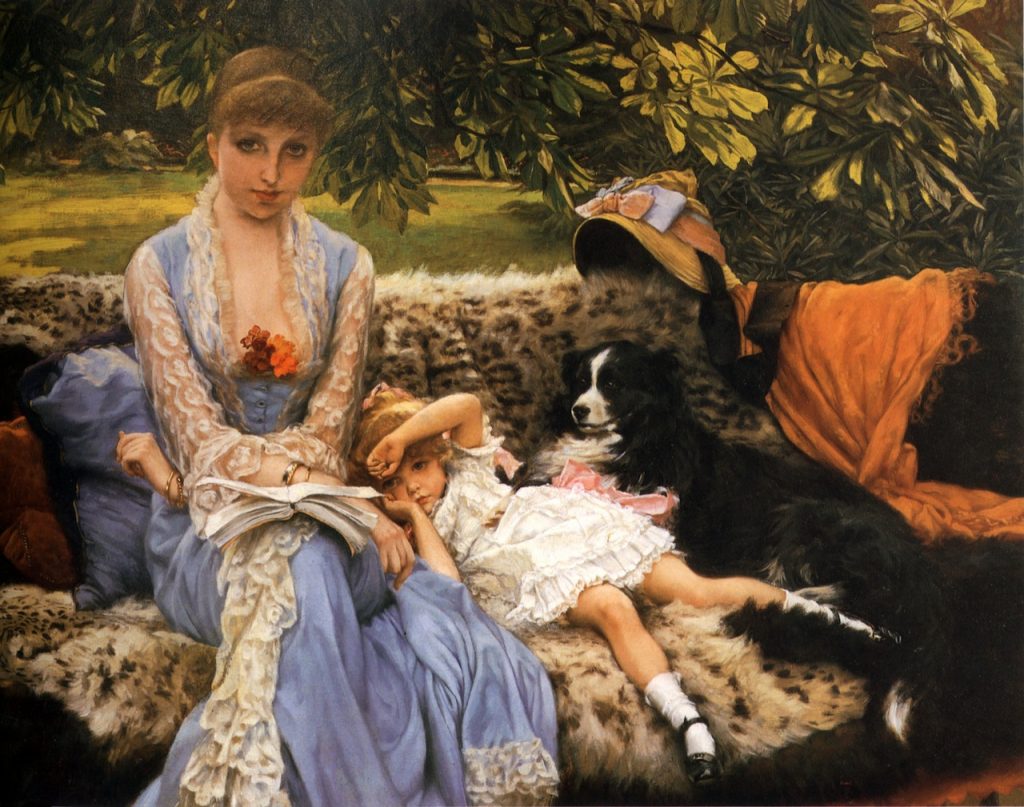 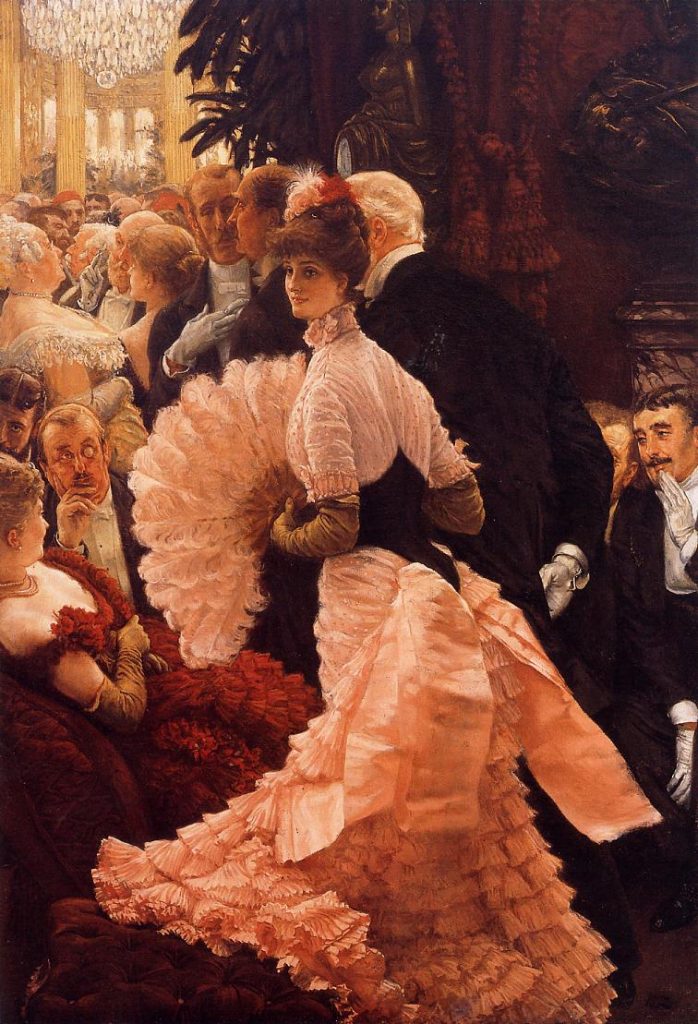 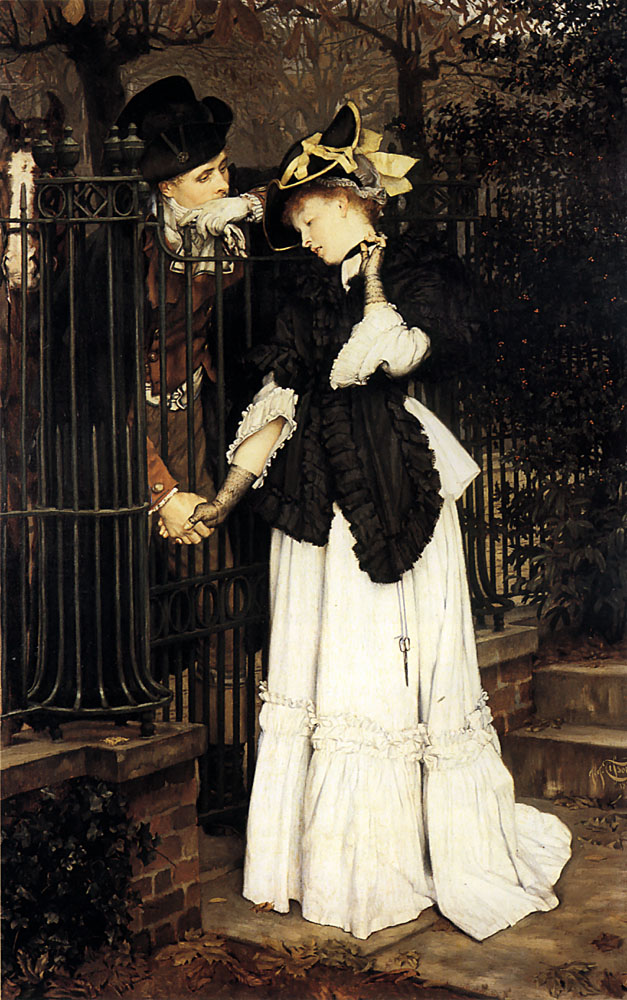 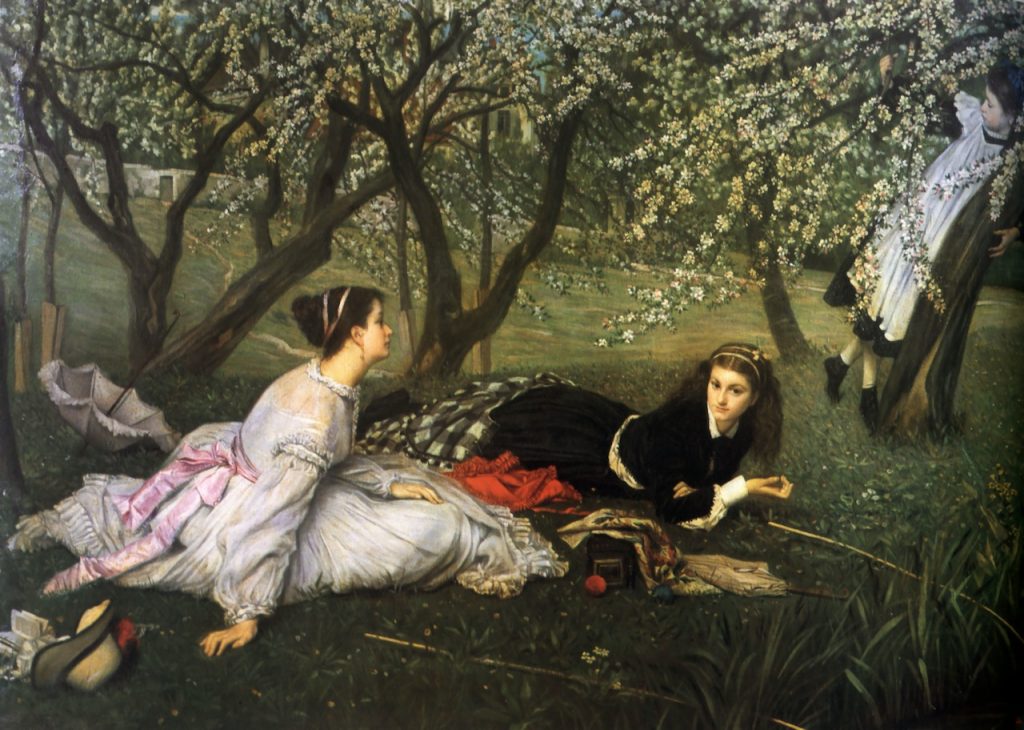 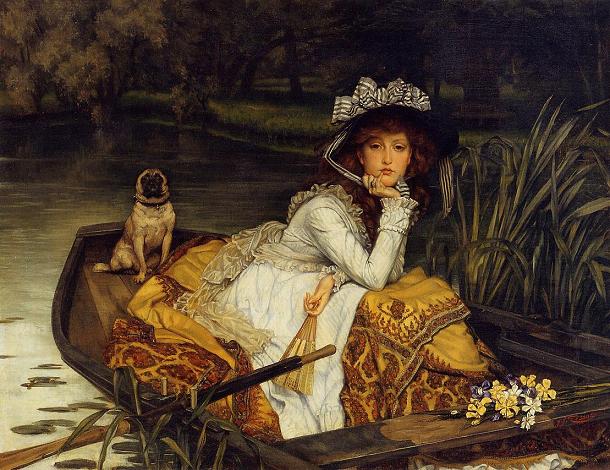 Life Without Cars can be a lot of fun.