Today, we have a speech by the Chairman of the Federal Reserve, William McChesney Martin, given on March 18, 1968. At this time, the Bretton Woods era was coming to an end, not because of some inherent problem, but because those in charge of maintaining it (including Martin) really didn’t know what they were doing. It was the simplest thing in the world — a time of peace and prosperity worldwide — but they were not up to the task.

I originally looked this up because of the promising title. I figured I could get some good quotes out of it. But, as you will see, the title and the contents of the speech don’t have much to do with each other. That in itself is a little telling. But, my main takeaway from this speech is as an illustration of how confused people were. Martin goes on and on about the “dread deficits” — the current-account deficit, and the budget deficit. As we know already, the first one literally did not exist. The second was so minor as to be a nonissue. We looked at this before:

Even if there really was some kind of budget deficit disaster, which would be reflected in current accounts, this would have little to do with the currency. All the Federal Reserve needed to do was to reduce the supply of base money. 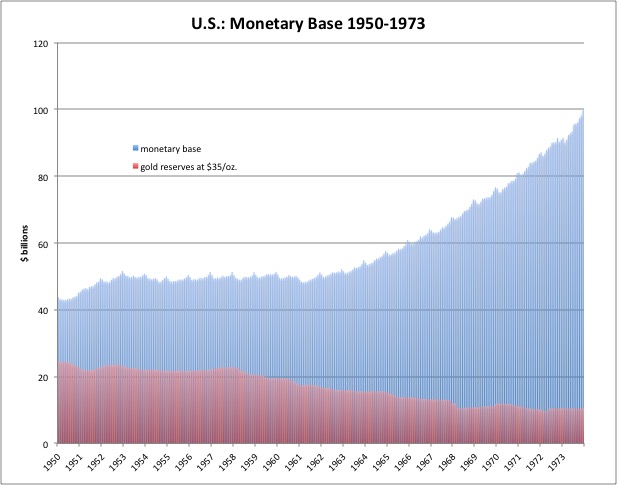 The steady rise in base money at the time looks suspicious to me. 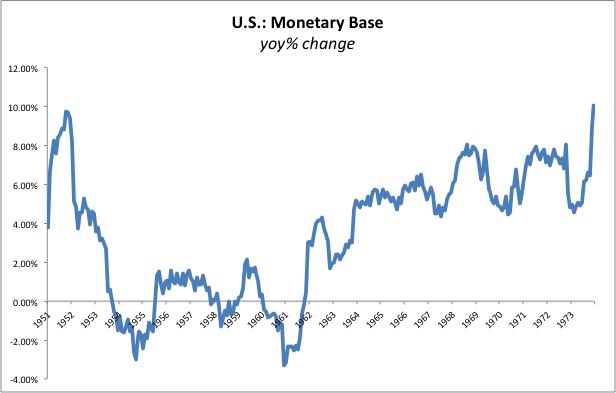 After 1962, we see that the monetary base begins to fall within a much narrower range of growth rates. It is not quite a straight line, but looks suspiciously like there was an attempt to stabilize this metric. This follows the publication of A Program for Monetary Stability (1960), by Milton Friedman, in which Friedman proposes a Constitutional Amendment that would keep the growth rate of the monetary base between 3-5 percent per year. It also coincides with the Monetary History of the United States (1962), also by Milton Friedman, which was very influential and provided some intellectual support for the first book.

Martin’s speech indicates just how confused people were in those days. It was all rather pathetic. But, what is even more pathetic is that the majority of economists still haven’t figured this out. I think that is changing a little bit now.