Maybe autonomous vehicles will make all talk of parking obsolete in a few years. But that day has not yet come, so let’s figure out what market-rate parking might look like.

The cost of open-air parking isn’t much more than the cost of the land; and this is common where land doesn’t cost much. Commonly, in these areas, parking will be integrated with the structure in some way, as offstreet indoor or outdoor parking, and the choice of including parking is inherent in the design of the structure. But, we are interested in particular in those higher-value urban locales, where land is quite valuable — you could use it for offices and apartments, rather than for parking. Let’s say that we are in a higher-value urban place, where houses or apartments might sell for about $400 a square foot. Probably, this will justify a multilevel parking structure.

Each parking space corresponds to about 325 square feet of floor area, between the parking space itself and related access lanes. Housing for cars requires about as much space as is commonly required by a person. 325sf makes a nice studio apartment for one. 325*2=650sf makes a nice one-bedroom for a couple. 325*3=975 makes a two or three-bedroom apartment for a family of three or four. 325*4=1300sf makes a roomy three-bedroom for a family of four.

Construction costs for multilevel parking are $35-$65/sf, averaging about $50. $50*325sf=$16,250 per parking space. Underground parking costs roughly one multiple for each level below grade. Thus, underground parking that is one level below grade is 2x$16,250, or $32,500 per parking space. Two levels below grade costs 3x$16,250 or $48,750/space. Obviously, this becomes prohibitive very quickly, so we will only consider above-grade multilevel structures.

To this we can add land costs, and all other related costs. Obviously, per-unit land costs fall as floor-area-ratio rises; or, in other words, more floors are cheaper. However, there is a limit to how tall you can make a multilevel parking structure: about six stories is the practical limit. You can go above this if you use elevators, but this is rare.

Let’s take a look at the operations of a market-rate parking provider. We will look at MVP REIT, a Real Estate Investment Trust that owns a number of parking properties. You can look at their annual financials here:

Click to read the annual report of MVP REIT.

I’m not sure this is a very good example, especially since they have been expanding, so their financials are somewhat clouded by various acquisitions. But, let’s see what we can do with it: 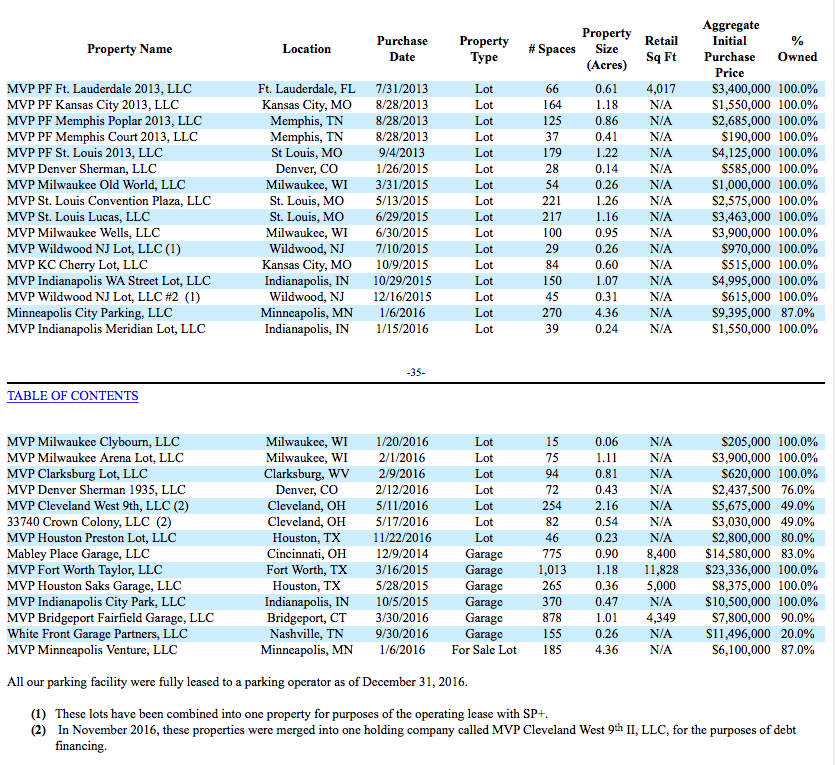 Obviously, we have a mix here of lot parking and garage parking, in a variety of markets all of which have their own characteristics regarding pricing and so forth. These might be per hour, or monthly, or many things. Also, the company has partial holdings of many properties, and other complicated stuff. We can at least get an idea of the market value, by comparing the purchase price (since all the acquisitions are recent, these are probably close to present market value). The Fort Worth garage, with a big 1,013 spaces, cost $23.336m, which works out to $23,036 per space — not a lot more than our $16,250 per space construction costs, implying that land is relatively cheap in Fort Worth, as one would expect.

You will remember that the value of a property is basically (profit)*(capitalization rate). The capitalization rate is typically expressed as a percentage, so in practice you would divide not multiply, but we can represent it as multiplication since it results in a multiple of profit. The profit is basically (revenue)*(profit margin), and profit margin is (revenue-expenses)/(revenue). 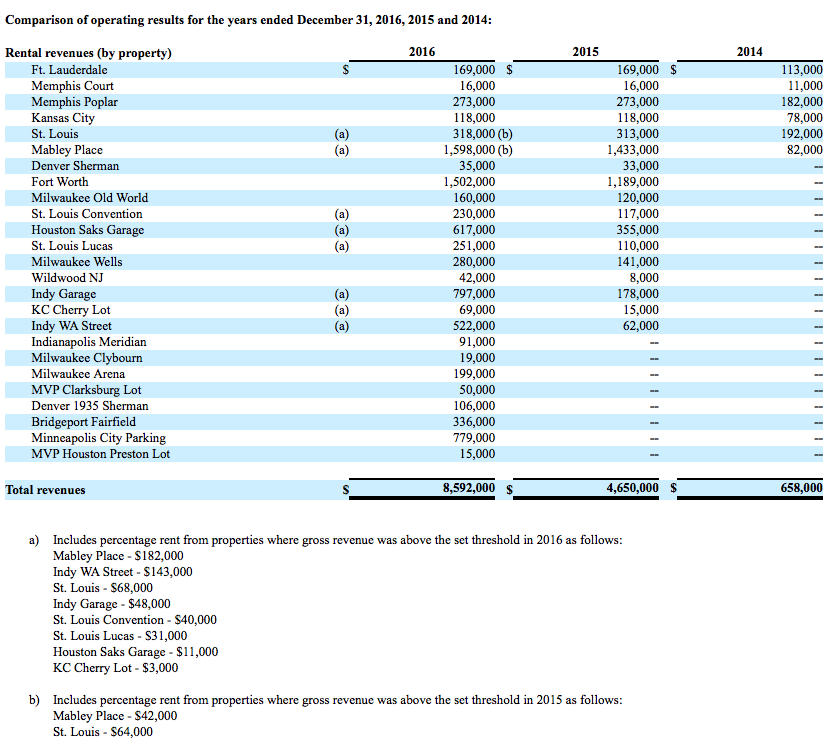 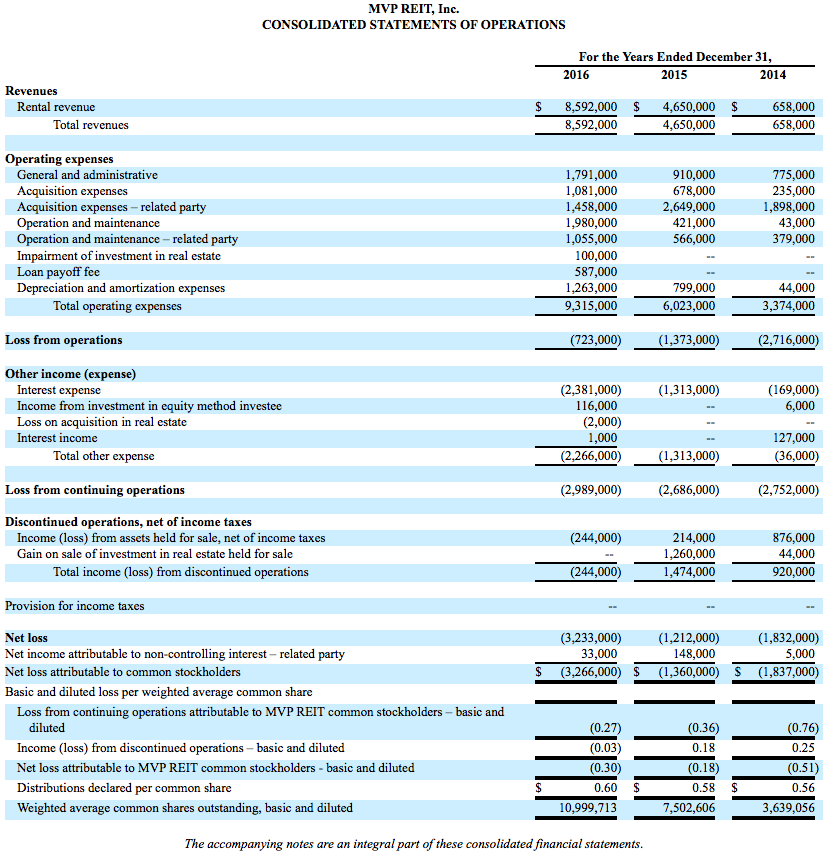 The income statement is always somewhat difficult to interpret for REITs, which is why they usually provide alternative metrics. Here, we also have a lot of issues regarding acquisitions. Nevertheless, we have some useful numbers here for Operation and Maintenance and General and Administrative.

Expenses are not broken out in a per-property bases. They claim Funds From Operations (basically, this means profit) of $1,533,000, but there were a lot of adjustments due to acquisitions so it is hard to say what it would look like on a “stabilized” basis. The FFO was 17.8% of revenue of $8,592,000. But, this FFO ratio could vary a lot between individual properties. Obviously, a property in a place that can charge a lot for parking will have a higher operating margin than a place that cannot.

We can make some crude comparisons between parking and housing.

We saw that at an overall FAR of 3.0, we could spend about $20 million an acre for land, and build apartments (in roughly six-story buildings) at a selling price of about $400/sf.

In our example, apartments cost around $400/sf, which translates into a rent of about $1,554/month for a 600sf one-bedroom apartment.

Let’s say that we are in the same neighborhood as our $400/sf apartments, and want to build some parking garages. We will assume that the FAR of parking is about the same as the FAR of housing, and thus, the land cost per built sf is about the same. The cost of land would be about $122 per square foot of built parking garage, plus $50 for construction of the garage, plus a few ancilliaries, adding up to, let’s say, $200 per square foot total cost for the parking garage, which is half the per-square-foot cost of housing. Since there are 325sf per parking space, this means $65,000 per parking space. If we take (rather arbitrarily) the Fort Worth revenue/property value ratio of 6.4% and assume 92% occupancy, the asking annual rent on this would be about 7.0% of that, which is $4,550 or $379 per month. If your land costs were a lot lower, such that the total cost of the parking garage was $100/sf or $32,500 per space, the monthly rent would of course be half of that, or about $190/month.

In an environment like this, it doesn’t take a genius to figure out that you would probably be better off not owning a car. Because, you can just rent a car for the weekend. And how many weekends a month did you plan to spend out of town? At one weekend a month, it would probably cost you less than just the cost of parking alone, not to mention the cost of owning a car. The end result of this is that people naturally get rid of their personal automobiles; and thus, all parking problems disappear, along with most traffic problems. All of the land being consumed by parking thus goes into its natural higher-value use, as housing and commercial buildings. The result is that there is much more within walking distance, and thus, less need for a car.