“If you like the euro, why not just call for a global gold standard?” asked Matthew Klein, of FT Alphaville. Good question! Klein is hardly a gold standard advocate. But, he saw enough similarity between, let’s say the Classical Gold Standard period of 1880-1914, and today’s euro bloc, that the idea seems to make a lot of sense; and he could tell that a lot of bad-mouthing that academic economists indulge in today is nonsense.

Despite the notion common among academics that everyone should have their own floating currency to play with, the reality is that — after many decades of hard experience — governments worldwide have figured out that it is better just to adopt a shared standard of value. The International Monetary Fund calculates that about two-thirds of all countries worldwide have linked up with some international currency bloc, mostly the euro bloc or the dollar bloc, although there are also small blocs based on the Australian dollar and South African rand. I think that most of the remaining countries are “informal” participants in one of these currency blocs, intentionally keeping exchange rates within a fairly narrow band although they do not have an official policy of fixing exchange rates.

The IMF counts 26 non-European Monetary Union countries that fix their currencies to the euro, or use the euro itself; plus, there are 18 countries using the euro in the EMU, for a total of 44 countries in the euro bloc. The dollar bloc has 43 countries, plus the United States.

These countries — in principle, and often in practice — do not have any separate “monetary policy.” They just link their currencies to an external standard, and hope for the best. One advantage is that they enjoy fixed exchange rates with all other countries in the currency bloc, vastly simplifying international trade and investment. Also, the history of small countries that attempt to “go it alone” with their own homegrown floating currency isn’t very good. Although the U.S. dollar today is worth less than one-thirtieth of its value vs. gold in 1970, the end of the Bretton Woods gold standard era, nearly all other floating fiat currencies have done worse than that — often far, far worse. Over seventy countries have experienced hyperinflation just since 1970.

This was the basic format of the Classical Gold Standard period of 1870-1914. Most countries in the world linked their currencies to an external standard, namely gold. There was one worldwide “currency bloc” of gold. Quite a few governments tried going it alone with their own floating fiat currency during that time, including: Brazil, Argentina, Chile, Portugal, Italy, Spain, Greece, and for a while, Russia, Austria, the United States, and Japan. None of these discovered any advantages compared to the countries that stuck to the gold standard, including Britain, Germany and France. After a long period of floating currencies after the Civil War, the United States returned to gold in 1879. In time, so did Japan, Russia, Austria, Argentina and Greece. They had learned their lessons.

I could go on and on about why using gold as a common standard of value — a “gold bloc” — is better than whatever might come of the Federal Reserve and European Central Bank. And, in fact I did go on and on about it, in a series of three books, the latest of which is Gold: the Final Standard (2017). So, you know where to go. Instead, I will ask you to look at this chart: 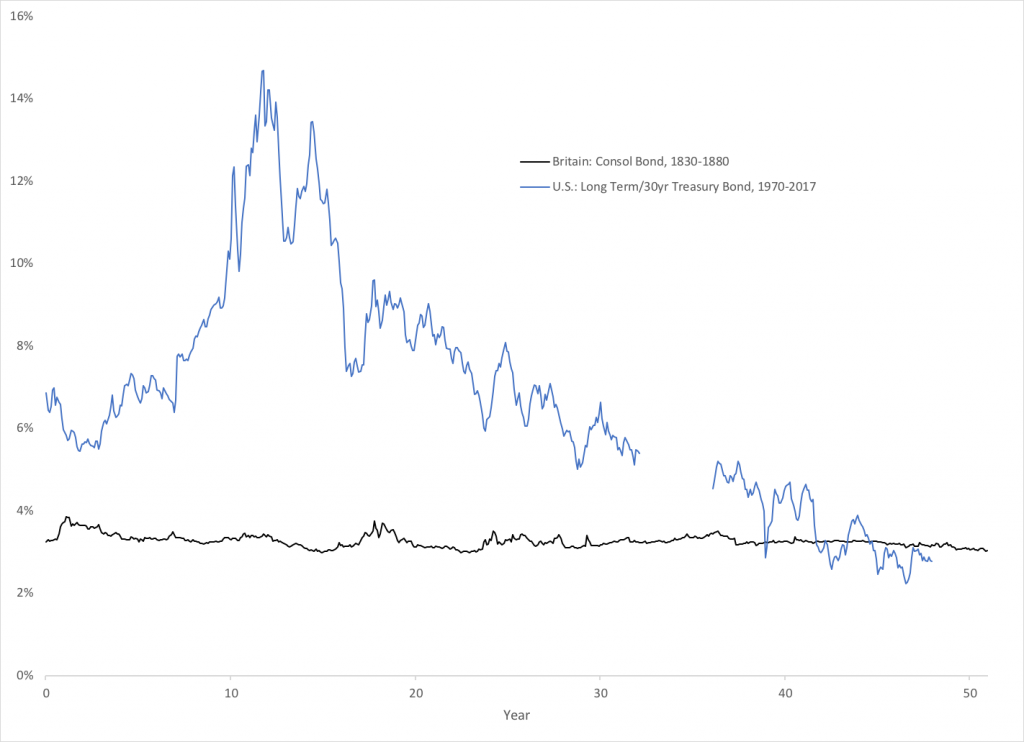 This is a chart of government bond yields over a fifty year period. One is the market yield on the British Consol Bond, in 1830-1880, a particularly placid time. The Consol bond was a government bond of “infinite maturity,” which was common in those days. Governments don’t even issue bonds like this anymore, because nobody would buy them. The top line is the yield on the “long-term” or thirty-year U.S. Treasury bond, from the end of the gold standard in 1971 to the present.

The yield on the Consol bond, which hardly changed during an adult lifetime, indicates a degree of macroeconomic and monetary stability that exists nowhere today. It wasn’t just Britain — this result was shared worldwide by the end of the nineteenth century, as other countries that participated in the Classical Gold Standard got a similar, repeatable outcome. Britain wasn’t the first, either — Amsterdam had a similar result in the seventeenth century. It appears that Rome did too, in the first century A.D.

Now I ask any PhD-wielding economist, anywhere on this planet, to tell me how they would replicate this result today, without using a gold standard system. Come on Mr. Smarty-Pants, tell me how you are going to replicate this result. No central banker has done it in the last fifty years. No central banker even dares to suggest that such a thing is possible.

Hear that? That’s the sound of crickets chirping.

That’s why gold is the Final Standard. It cannot be beaten.