The Astonishing Genius of Men in Tights
February 26, 2011

During the 17th century Britain was a financial backwater. The currency was prone to periodic currency devaluations by the king, who typically wanted to escape the burden of his past obligations. As a result, credit was almost nonexistent. Interest rates for business borrowers were typically in the 13% to 18% range, typical of countries today with low-quality currencies.

The financial center of the world in those days was Amsterdam, which had used a gold standard for a century. Interest rates in Amsterdam were around 3.5% for the government and 4.5% for commercial borrowers, typical of gold-linked debt throughout history.

In 1689, with the Glorious Revolution, William of Orange became King of England. William was Dutch, but he had married Mary Stuart of the British royal family. Perhaps William, upon his arrival in London from Amsterdam, found the English financial system a little backward. He was aided by philosopher John Locke, who had fled to Amsterdam in 1683. Locke returned to England with William in 1688.

Locke argued that the English financial system could be set right if the relationships between lenders and borrowers was protected, by fixing the currency to gold. The currency would be stable in value–as stable as humanly possible. After generations of a floating currency in Britain, this was a revolutionary idea. Was such a thing even possible? Locke’s argument swayed England’s Parliament, and in 1698 England effectively began its long allegiance to the gold standard.

If there is one picture that sums up England’s 216-year (1698-1914) experience with the gold standard, it is a chart of the market yield of Consol bonds during that time. The Consol was an unusual government bond in that it never matured. These were the longest of long-term interest rates. 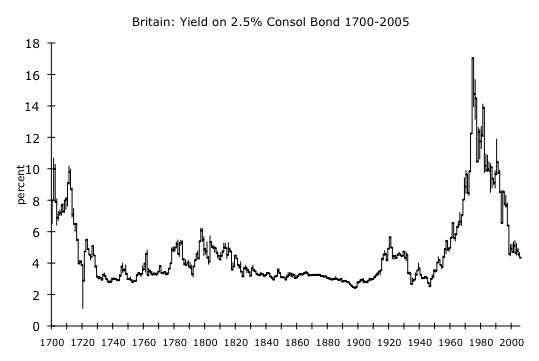 The first thing of interest is where it starts: government bond yields began around 10%. However, during the first 20 years of a reliable gold standard, bond yields plummeted to around 3.5%, where they stayed for two centuries.

Two minor aberrations are worth noting: The first is in the 1780s, which coincides with the American Revolution. This is followed shortly thereafter by a period 1797-1821, during which the pound was delinked from gold during the Napoleonic Wars and devalued slightly in the open market. Not surprisingly, yields floated up to around 5% due to the uncertainty at the time.

During the 1830-1914 period, yields reached a degree of stability that is almost inconceivable today. Decades passed while yields floated within a range of less than 1%. Locke’s promises of monetary, financial and economic stability were proved true. Upon this foundation, an industrial powerhouse and great empire was created.

The 18th century was a time when men of stature wore tights, high-heeled shoes and enormous powdered wigs. Today they seem quite ridiculous. Writing was done with a sharpened bird feather dipped in ink, sealed with sealing wax, and hand-carried by messenger. How primitive they were compared with today, when we can buy and sell credit default swaps on mezzanine tranches of collateralized debt obligations with a phone call or mouse click, from a yacht floating in the Caribbean.

And yet these oddly dressed men did things nobody can do today. Of the hundred-something central banks of the world, not one has delivered this kind of performance in recent decades. Certainly not the Federal Reserve, the ECB or even the Bank of England. Governments wouldn’t dare issue a bond of infinite maturity, for the simple reason that nobody would buy it.

We are drifting back toward the situation of Britain in the 17th century, when sovereigns would devalue their currencies on a whim. Just as was the case then, nobody finds this out of the ordinary. The idea of a stable, gold-linked currency is as bewildering today as it was when Locke pitched it in the 1690s.

After a long bull market, bond yields today are actually not far from their levels during the glory days of the British gold standard. However, there is a big difference between maintaining this state for a few months or years and maintaining it for centuries. Eventually bond prices will reflect the very real risks inherent in them today. This will be unpleasant, which will propel a search for solutions.

To whom do you pay attention? The people who delivered results? Or today’s economists, who talk a big talk, but have never–not even for a few moments–matched the astonishing genius of the men in tights.