Last week, we were looking at how gold standard systems work. We used the example of the United States, which, from 1789 to 1860, had a libertarian “free banking” system. Anyone could issue currency, but it had to be pegged to gold. This “gold peg” was a value peg. It had nothing to do with gold mining, or the gold reserves of banks, or imports and exports of gold. Does gold mining alter the value of gold? Essentially no, because annual gold mining production is a small fraction — about 2% — of existing world gold supply. Does importing and exporting gold change the value of gold? Not unless there are some sort of restrictions on importing and exporting, which is rare, and hard to enforce even if it exists. Gold is the same value everywhere. Does the fact that a bank owns or does not own gold change the value of gold? Nope. It’s the same value no matter who owns it. So you see, none of these factors have much effect on the value of gold. And if a banknote’s value is pegged to gold — via the adjustment of supply — then obviously these factors have little effect on the value of banknotes.

The fact of the matter is, during the “free banking” period, nobody actually knew what the “money supply” was. In 1859, the Hodges Genuine Bank Notes of America listed 9,916 notes issued by 1,356 banks. Yes, there were 1,356 banks all issuing their own homegrown currency in those days, all of it linked to gold. Actually, there were more than 1,356 banks, because Hodges missed dozens if not hundreds of banks! Banks were opening and closing all the time. Do you see? Not only did nobody know the total amount of banknotes in issuance (except for some vague statistics), nobody even knew how many banks there were issuing currency. Think about that. So how was the money supply determined in those days? All of these 1,356+ banks had the same operating mechanism, which was a gold value peg maintained via the adjustment of supply. When the value of banknotes was a little low compared to its gold peg, the supply of banknotes was reduced. When people were happy to accept larger issuance of banknotes, without redeeming them for gold, in other words when the value of banknotes was higher than the gold peg, then the supply of banknotes increased.

Unfortunately, today we have all sorts of the stupidest imaginable ideas floating around, whereby a “gold standard” is a system by which the amount of money in circulation is determined by gold mining, or the “current account balance,” or that a gold standard means a “100% gold reserve ratio” or absolutely no change in the “money supply” whatsoever, some such thing. Anyone with the briefest understanding of historical monetary statistics — this includes you if you read last week’s item — can see immediately that this is complete baloney. The next thing you should realize is that 99% of academic economists including Ben Bernanke and also 95% of gold standard advocates including Murray Rothbard — also have no idea whatsoever how real gold standard systems operated, in real life during the period 1789-1971. What this means is that, after spending 20 minutes to read last week’s item, you now know more about this than 95%+ of the so-called “experts.” Do you see now why I say that today’s understanding of these matters is appalling? On the other hand, you can now be a World Expert with about 45 minutes of work. Which is sort of fun, in a way.

Let’s continue our story in 1880. In 1863, the National Bank Notes system was introduced in the United States. Banks that wanted to issue currency had to register with the Office of the Comptroller of the Currency, an agency of the U.S. Treasury. There were still thousands of these National Banks — 3,438 National Banks in May 1890 — so it was still a libertarian sort of system. However, now we have system-wide statistics on the total banknotes outstanding. The dollar floated vs. gold from 1861 to 1879, so 1880 is a good place to restart our tale of how the gold standard system operated in the United States. The National Banks themselves didn’t hold gold reserves for the most part, but rather U.S. Treasury obligations. The gold reserve of the National Bank system was the U.S. Treasury itself.

Here is some information on the National Bank system from the annual reports of the OCC:

The St. Louis Fed has all kinds of wonderful historical stuff. You used to have to go to the library for this sort of thing. I did a lot from microfilm! Ugh.

Unfortunately, I don’t have good statistics on U.S. Treasury gold holdings from 1900 to 1913. I only have 1905 and 1910. So, the intervening years are linearly extrapolated. If you have these numbers, let me know.

Let’s review first the history of the dollar. 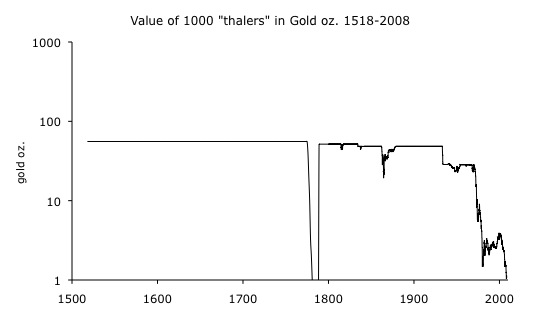 The “dollar” was originally a European silver coin called the “thaler.” It originated in 1518. This became the Spanish silver “dollar,” which became the template for the U.S. dollar when the dollar was defined in 1792. So, the idea of the “dollar/thaler” goes waaaay back.

Except for a minor adjustment in 1834, the dollar’s value was unchanged until the Roosevelt devalutation in 1933. We can consider the entirety of the 1789-1932 period as having a dollar pegged to gold at $20.67/oz. There was a lapse during the Civil War, and also some business around the War of 1812. After the Roosevelt devaluation, the dollar was pegged at $35/oz., until 1971. However, there were some lapses during this time too, especially during World War II. 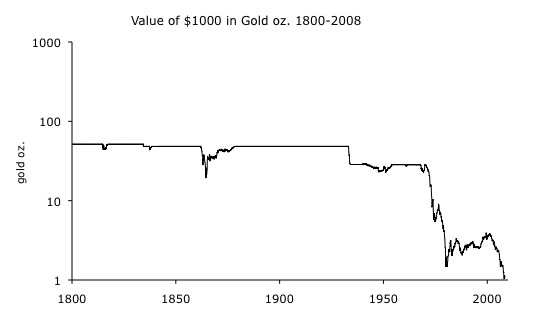 Here you can see the Civil War devaluation and return to the gold standard, the 1933 devaluation, and the floating currency period after 1971. 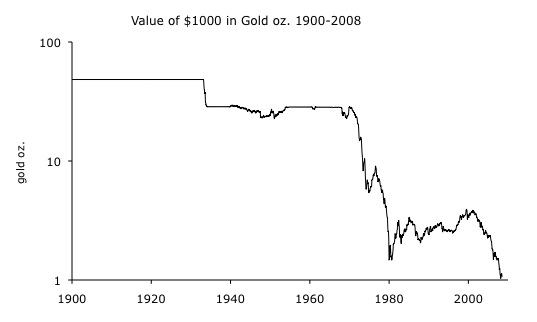 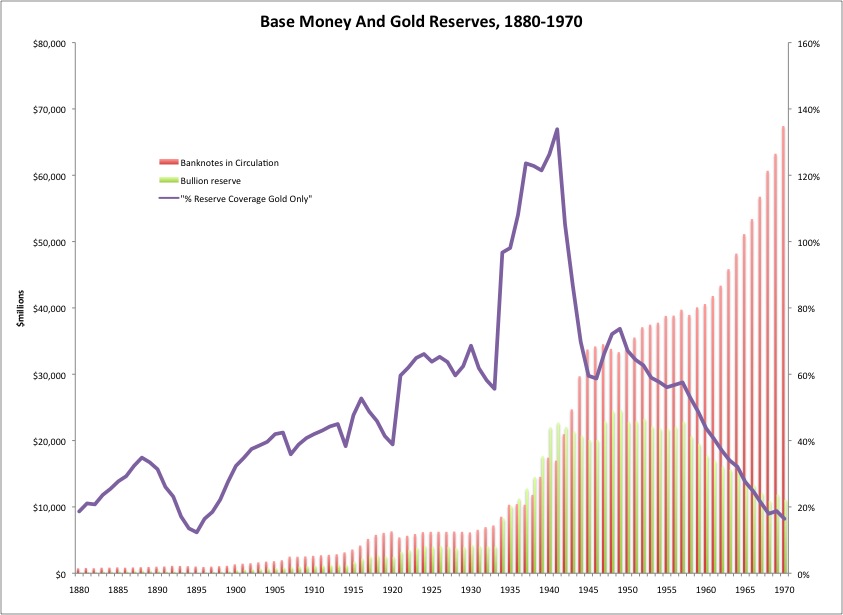 There you go. The pink bars are base money (not including gold coin), basically banknotes and bank reserves. The green bars are the total amount of gold held by the U.S. Treasury, in terms of dollars. You can see a big jump in gold reserves in 1934, because that’s when they were revalued at $35/oz. instead of $20.67/oz. The data comes from Milton Friedman A Monetary History of the United States, “high powered money” minus gold coin, which comes from the Federal Reserve’s Banking and Monetary Statistics. The base money figues after 1918 come from the St. Louis Fed.