Turkey is in the headlines again for the falling value of the Turkish lira. We get the same old story about how the central bank is “doing everything it can” to support the lira’s value, including an increase in policy interest rates. If anything, this usually makes the problem worse: the opportunity costs of holding cash increases, so naturally, people want to hold less cash.

As is almost inevitably true in these cases, the real problem is that the central bank, even as it purchases lira in foreign exchange interventions, does not reduce the amount of lira in existence – the lira monetary base. No, it’s worse than that: the rate of lira base money expansion (“money printing”) continues around 20% per year! That’s right: while they are complaining about the falling lira value, they’re “running the printing presses” at roughly a 20%-per-year rate. This causes the value of the lira to go down for two reasons. First: supply – more lira, obviously. Second: demand – who would want to hold a currency managed in such a fashion? Get me outta here. 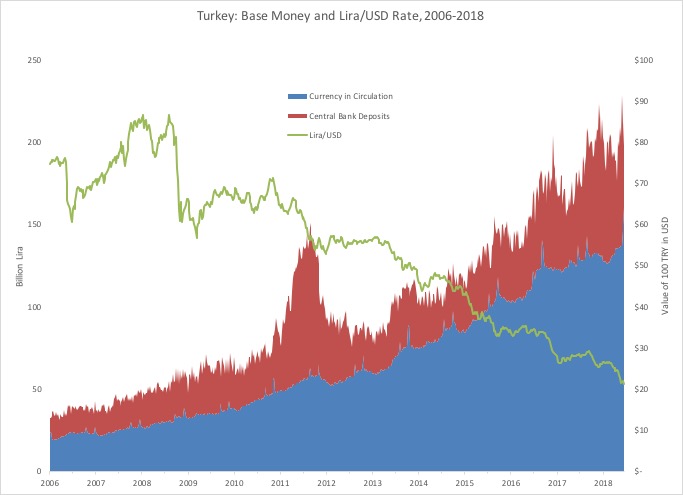 I looked recently at how these things have played out in Argentina, where, despite the charade of hand-wringing about the Argentine peso’s declining value, peso base money is still on about a 30%-per-year growth track. It’s just another chapter in Argentina’s long history of currency decline and hyperinflation.

The story for Turkey is not much better. Turkey actually used to be rather well disciplined about its money. Turkey was one of the few countries that did not devalue during the Great Depression. During the 1950s, 1960s and 1970s, the value of the lira remained quite reliable compared to the dollar. But, the currency turmoil of the early 1980s – which also blew up virtually all of Latin America – also set Turkey on a long path of currency debauchery, which it did not recover from until about 2000. 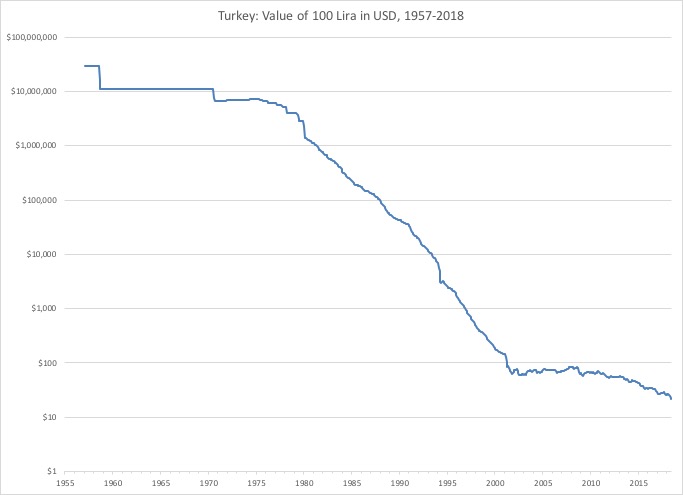 If Turkey would really rather have another decade of hyperinflation, there is probably nothing that can be done to stop them. But, if they would like to stabilize the currency, the method to do so is very simple. If the lira’s value is lower than they would like, then they should use some of their foreign reserves to purchase lira in the foreign exchange market. But, these lira must be removed from existence. Base money should contract by an amount equivalent to the size of the purchase, and should not be allowed to expand via any other domestic mechanism such as an interest rate target, monetarist target, and so forth. If the currency’s value is too high, then you buy foreign exchange and sell lira, with the monetary base increasing by the size of the operation. This is the basic operation of a currency board.

The central bank can also reduce base money supply via the sale of domestic assets, such as government bonds, with lira base money reduced proportionally. But, the central bank’s foreign exchange reserves alone are quite sufficient to do the job. Recently, the lira base money supply (central bank deposits and currency in circulation) was 212 billion. Against this were $78 billion in foreign exchange reserves which, at the recent exchange rate of 4.70 lira/dollar, were worth 359 billion lira. In other words, the central bank could buy back every lira in existence, and still have $33 billion in forex reserves left over. In practice, nothing so dramatic would be necessary. Typically, even in a crisis situation, a currency’s value can be supported with a reduction in base money of less than 20%, which would today require about $9.0 billion.

In the last twelve months, the central bank has used about $11 billion in sales of foreign reserves. But, base money did not contract by the equivalent lira amount of around 45 billion lira. Instead, lira base money increased by about 39 billion lira, or 23%. Don’t do that. 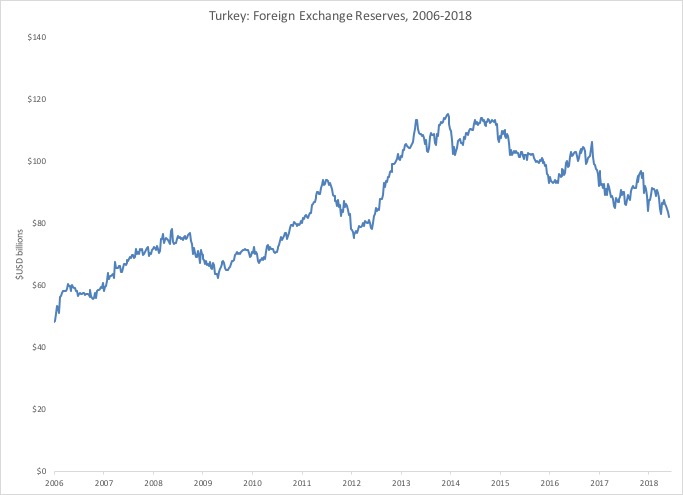 Turkey could implement a formal currency board, which would just mean the formalized, automatic operation of the process just described. Turkey could even dollarize, or euroize. It can be a good solution for a country with a long history of being unable to take care of itself properly. Unfortunately, due to Turkey’s somewhat uncertain geopolitical allegiances, the implications of this are somewhat unclear. But, technically, it would simply be a matter of trading lira and foreign exchange reserves, with the goal of phasing out the lira completely.

The government of Turkey – the government, not just the central bank – should learn a thing or two about proper currency management. It’s not actually all that hard. Most of what you need to know is in the preceding few paragraphs. Otherwise, I would suggest my book Gold: The Monetary Polaris (2013), which goes into these topics in detail.

If Turkey allows itself to sink into another era of currency debauchery, it will be because it chooses to do so. These problems are not hard to solve.