What Is The U.S. Economy?

I was working on figuring out what has been going on in Japan recently, but this has been quite time consuming. Maybe I’ll finish it up for next week. In the meantime, the New York Times has given me an easy out with something I’ve been meaning to write about for a while.

Economics, as I’ve said, is the study of how people make a living. The “economy” produces everything that we end up using, as “consumers.” So, if you want to get a snapshot of what the U.S. economy actually does, all you have to do is to look at where people spend their money. Actually, it is not quite so simple as that, as many U.S. consumer products are made overseas these days, while U.S. businesses are producing mostly corporate goods and services for export. So, really there is the world economy. Also, many companies are engaged in various steps of the productive process. They may do accounting for businesses, for example, or they may produce capital goods, like a software company. Nevertheless, at the end of the day, the purpose of all this is to produce goods and services for consumers.

There is one major element left out of this, which is the government. You can think of households paying for government goods and services via taxes. Some of the taxes are transfer payments, such as Social Security, so their effect flushes back into consumer spending. Medicare, and other state-funded medical care, are huge items that don’t appear here, and makes the medical care portion of the economy much bigger than it appears here. Even more medical spending is in the form of employer-provided health care, which is an employment benefit that doesn’t make it into the “consumer spending” category. Also, there are things such as state-provided education (especially primary and secondary), military spending, infrastructure spending for roads, police and fire service, and so forth. 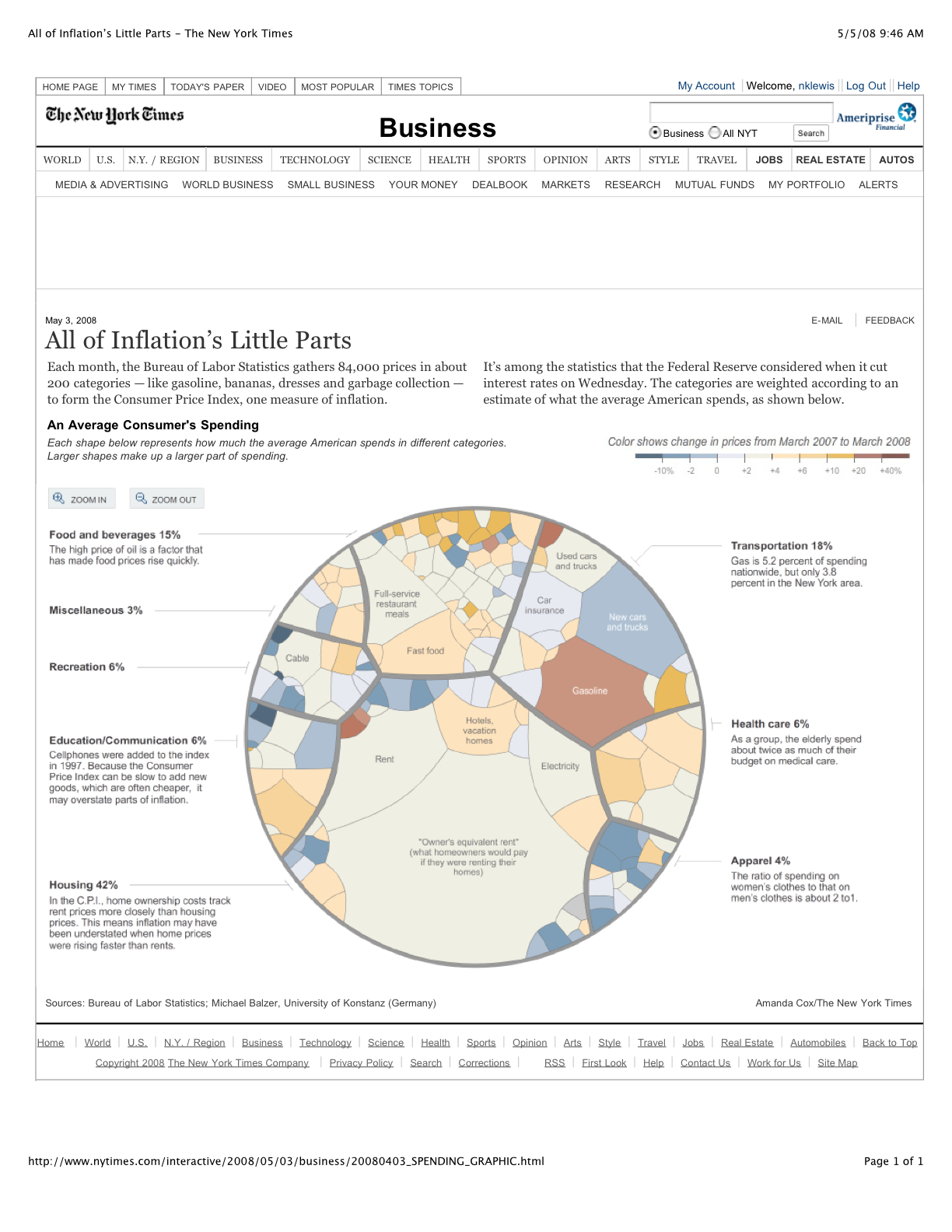 A fully interactive chart — which you can click on for more detail, it’s really fabulous — is here:

I suppose I should look at things from the production side as well, and maybe I’ll get to that someday.

We are still stuck in the metaphor of “making widgets”, but actually there isn’t all that much widget-making going on. The biggest “widget” being produced is housing, and all the associated home furnishings. I often think of home furnishings (including televisions, home appliances, etc.) as a direct adjunct to houses, since I would say furnishings are directly related to house square footage. It’s like tires for your wheels. Transportation is the next biggie, and since we are a car-centric economy, this means cars, fuel, and car maintenance. For another economy, train fares might be a big portion of this section. Medical care is of course a whopper, not only because of the 6% listed here but all the other government and corporate spending going on. I think medical care is up to 16% of the entire U.S. economy these days. I call it the Blob that Ate the Economy. Basically, it has evolved into an extortion system: “pay us or you die.” Education is the next big expenditure, and again this leaves out huge expenditures on education paid for by taxes. College education also seems to have evolved into a shakedown system, as it is impossible to justify the prices of private colleges based on the cost of providing the services received.

Food is a pretty big part of the economy, which we don’t think about that much.

We are becoming more and more of a service economy. Economics doesn’t distinguish between an automobile and a restaurant meal, or a psychologists’ advice. Either one is a perfectly valid way to spend one’s money, which is to say, a perfectly valid product of the economy. Personally, I think the amount of money spent on the biggies — housing, education, medical care and transportation — is pretty ludicrous. That’s why I often propose ways to radically reduce expenditures in this area, such as by adopting more modest housing norms (basically urban norms in urban areas) or by using a mass transportation system, which is dramatically cheaper. (New York City’s monthly subway and bus pass costs $72). Then, you would have more money left for recreation, which is a puny 6%. What if recreation were 16% of the economy and medical care was 6%? That sounds more sensible to me.

Even the “things” we buy are really mostly services. For example, we go to Banana Republic and buy some pants. Looks like a thing, right? But what are we really spending the money on? If you look at Gap’s income statement (I’ll do this sometime), you’ll find a certain amount went to advertising (which, in the case of apparel, I consider the creation of a sort of non-physical product of ideas and impressions), quite a lot went to retailing (essentially a service), some went to transport and warehousing, some went to corporate overhead, designers, etc. (office jobs), and maybe 15% went to the actual producers of the product, probably some Chinese manufacturer. Is it fair that the actual maker of the pants only got $0.15 of your dollar? Probably not, but that’s the way it is. The point is, even the “goods” in our economy are mostly services, or at the very least related office jobs.

The “American Way of Life” — basically suburbs, big cars, expensive education and exorbitant medical care — is so expensive that not even Americans can afford it. This is, actually, what we are working all day for. Big houses and big cars, and vastly overpriced education and medical care. Seems kinda pathetic, if you think about it.

This has some relevance to the “Peak Oil” types, who see the economy as sort of a great clanking machine that runs on fossil fuel. No fuel, and the machine stops. Nice metaphor. But, let’s think about it: housing? You can build and maintain houses without fossil fuels. A little harder to heat, but I’ve provided many alternative solutions there. Education? Not fossil fuel dependent. Medical care? Also not very fossil fuel dependent. Transportation? Fossil fuel dependent today, but it doesn’t have to be. Electric trains are the ultimate solution. Food? Fossil fuels make food production easier and cheaper, but you can grow things without them. Probably the price would go up, a lot, and the labor involved would go up.